According to the World Health Organization (WHO), two billion people are infected with hepatitis B virus (HBV). Among infectious diseases, viral hepatitis has been proposed as a target for global elimination. Currently, although blood-based examination is common, an alternative assay using saliva has attracted attention as a simple diagnostic method. However, many issues need to be overcome to facilitate the use of this method, such as sensitivity of the diagnostic method and stability of the sample. Therefore, we have developed a new testing method for HBV surface layer (HBs) antigen using immunochromatography, and have evaluated its effectiveness.

Thus, the high sensitivity of the newly developed immunochromatographic test strongly suggests the clinical applicability of saliva as a clinical sample. In the near future, we plan to clarify the feasibility of this new method for implementation in various medical facilities and survey applications, with the goal of developing a wide range of clinical tests to detect HBV.

Despite the availability of vaccines against HBV infection, HBV’s prevalence remains high all over the world [1]. According to the WHO, there are 2 billion HBV-infected individuals and around 378 million chronic carriers worldwide. 80 million such carriers reportedly reside in Southeast Asia [2,3]. Over 50% of liver cancer cases result from HBV infection, with the main routes of transmission being sexual intercourse, parenteral contact, and vertical transmission [4]. Other sources of infection include surgery, dental care, contaminated surgical instruments, and donor organs. Centers for Disease Control and Prevention , HBV is an extremely powerful virus that is present in blood, exudate, saliva, semen, vaginal secretions, urine, sweat, and breast milk [5]. The virus can survive outside of the body and can easily be transmitted via contact with the infected body fluids [3].

Notably, the HBV infection rate in dentists is inferred to be higher than that in the general population, with the HBV infection rate in dentists being the highest among medical practitioners [6-8]. Dentists and dental hygienists are always at risk of infection, as they are exposed to contaminated fluids from needle sticks and infected blood droplets. Ideally, dentists and dental hygienists should investigate the HBV status of patients before initiating treatment. In practice, however, performing the conventional blood-based HBV test in general dental clinics is difficult. The use of a salivary test would facilitate the identification of HBV-infected patients by dental professionals prior to the initiation of dental procedures.

In the present study, we developed an immunochromatographic HBs antigen testing method that utilizes saliva as the sample. Saliva collection, unlike venipuncture, does not involve pain when puncturing a vein, thereby reducing the distress for the patient. The convenience and safety of saliva collection are the major advantages of this technique. Furthermore, saliva samples can be collected more quickly than blood can [9]. Since there are a large number of HBV carriers at the global level, the implementation of a survey investigation that uses saliva as the sample is expected to permit the accurate measurement of the true HBV infection rate. In turn, this information is expected to facilitate determination of the effectiveness of vaccination measures.

The purpose of this study was to evaluate the sensitivity and specificity of HBs antigen detection in saliva using our new diagnostic method.

This study was conducted with the approval of the Kyushu Dental University Ethics Committee (No. 14-18) and consent was obtained from the subjects after informing them about HBs antigen testing using saliva. Unstimulated saliva samples, collected according to a standard protocol, were obtained from 170 patients being seen at the Steel Memorial Yawata Hospital, including 70 patients who had tested positive for HBs antigen, and 100 patients who had tested negative for HBs antigen. The average age, the male to female ratio were 64.9 years, 45/25, respectively. The average HBV DNA level at 70 patients was 2.8 ± 1.3 IU/ml. The HBV genotype of 40 patients belonged to genotype C, 5 patients belonged to genotype B and no patient belonged to genotype A. The HBV genotype in 25 patients was unknown. 11 patients (15.7%) were positive for HBe antigen (HBeAg). Saliva was collected using a sponge and tube developed for saliva collection. After the sponge was left in the mouth of the subject for 60 s, the saliva was collected in the tube and centrifuged. Approximately 2 ml of saliva was collected from each patient and stored at -20°C until analysis [10]. Saliva samples were confirmed HBs antigen (HBsAg) using chemiluminescent enzyme immunoassay (CLEIA).

The Immunochromatography kit was obtained from ADTEC Co., Ltd. Oita, Japan (Figure 1). The kit was found to be faster and easier than an enzyme-linked immunosorbent assay (ELISA) and does not require equipment such as Microplate Reader [11]. The kit consisted of an immunochromatographic device, sample buffer, and conjugate buffer. To evaluate the diagnostic reliability of the kit, saliva samples were diluted 1:1 in the sample buffer, and a 100 μl aliquot of the diluted saliva was loaded onto the area inscribed “Sample” on the immunochromatography instrument. A positive result was indicated by the observation by visual inspection of a clear band based on supplied reference patterns at the test line after about 20 min. Immunochromatography chips were prepared as previously described, with some modifications. Briefly, anti-HBs IgG was immobilized on the immunochromatography membrane test line (T). On the control line (C), anti-mouse IgG Ab was immobilized to determine if the immunochromatography test was carried out accurately. Less than 20 μl of each saliva sample, diluted with the dilution buffer (50 mM Tris- HCl (pH 7.2), 150 mM NaCl, and 1% Triton X-100), was added to the immunochromatography chip in a dropwise manner. HBs antigens in serum samples were captured by the immobilized anti-HBs IgG on the immunochromatography membrane. Platinum-nanocomposite beads (Figure 2) [12] were labeled with anti-HBs IgG rather than with colloidal gold (Figure 3). Anti-HBs IgG-labeled platinum nanocomposite beads in the conjugate pad were visible as a blackcolored line after formation of the antigen-antibody complex. The color intensity was scored from 0 (no color) to 8 (maximum density) via visual inspection by referring to the control color sample card. 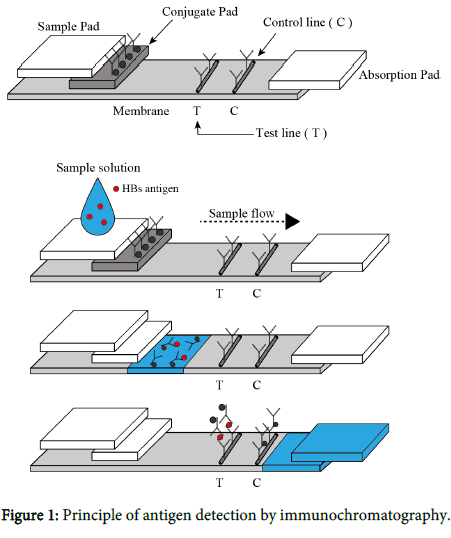 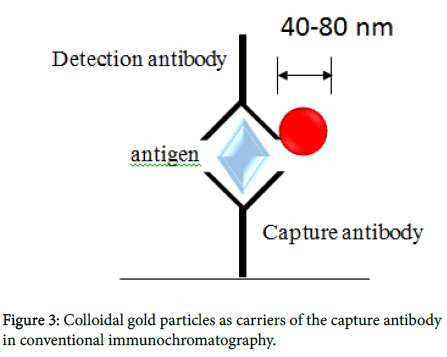 Figure 3: Colloidal gold particles as carriers of the capture antibody in conventional immunochromatography.

1. Saliva samples were collected from 5 patients diagnosed as HBs antigen serum-positive and 5 patients diagnosed as HBs antigen serum-negative at the Steel Memorial Yawata Hospital, and the results of the conventional immunochromatography and the currently developed immunochromatography methods were compared and validated using the samples.

2. Blood and saliva samples collected from 70 HBV carriers who visited the Steel Memorial Yawata Hospital and 100 healthy persons were examined using the new immunochromatographic method, and the results of the blood and saliva examinations were compared and validated.

Table 2: Detection of HBS antigen in the saliva of HBV carriers by the conventional immunochromatographic instrument.

Table 3: Detection of HBS antigen in the saliva of HBV carriers by the newly developed immunochromatographic instrument.

Table 4: Detection of HBS from HBV carriers by the newly developed immunochromatographic instrument.

Although to date there has not been a study on salivary immunochromatographic diagnostic methods for HBV, there have been several studies on salivary HBV testing via the ELISA method [13-15].

Although the sensitivity of salivary HBV testing using ELISA is high, that technique requires various reagents and an absorbancemeter. In addition, ELISA-based methods require lengthy measuring times. On the other hand, the immunochromatographic diagnosis method developed for this study does not require multiple instruments, and the measuring time is relatively short at 20 min. For these reasons, the new immunochromatographic method described here is expected to greatly surpass others in terms of practicality.

In the conventional immunochromatographic diagnostic method, the sensitivity was 20%, while the specificity was 100%; notably, the reliability of diagnosis using saliva as the specimen was low. In the present study, we found that an HBV detection system developed by Kyushu Dental University and ADTEC Co., Ltd., was very useful as a screening test for the presence of HBV. In the newly developed immunochromatographic method, both the sensitivity and the specificity were 100%. This superior performance can be attributed to the latex reagent developed by Nippon Steel Chemical & Material Co., Ltd [12]. Another factor is the secondary antibody employed in the immunochromatography kit. Notably, changing colloidal gold to platinum-nanocomposite beads made it possible to detect trace levels of virus or bacteria at concentration ranges that could not be detected with colloidal gold.

Despite the large number of HBV carriers in the developing countries of Africa and Southeast Asia, the implementation of a survey-based investigation to accurately determine the true rate of HBV infection has not yet been undertaken. HBV infection rates can be reduced by improving behavior, education, testing of all donated blood, and by employing sterile techniques in clinical practice and vaccinations. Undertaking a large national survey is considered to be very important in countries where HBV is endemic, and using an immunochromatographic HBs antigen testing method that utilizes saliva would enable large numbers of people to be surveyed within a relatively short period. Undertaking such a survey would also facilitate determination of the effectiveness of vaccination measures. In this way, we can make a positive contribution to preventing the spread of HBV in developing countries.

Further, by using our developed immunochromatography method in dental offices, dentists would be able to identify HBV infections that might not otherwise be detected. For example, according to a survey by the Japan Dental Association, 67% of Japanese citizens have personal dentists. Dentists are therefore well positioned to contribute positively to personal health by referring HB carriers to hepatologists.

In the present study, we focused HBs antigen in developing newly immunochromatography method because HBs antigen is very effective for the detection of carriers with hepatitis for the survey analysis. However, we have to make sure that it would be possible to use as a clinical diagnosis kit using serum or saliva of hepatitis patients. Further research is conducting whether newly developed immunochromatography method meets a clinical criterion for hepatitis even when serum and/or saliva are used test materials.

In the present study, we developed a new diagnostic device and evaluated the sensitivity and specificity of HBs antigen detection in saliva using our new diagnostic method. In summary, we have developed a salivary HBV antigen measurement method that is extremely easy to use and does not require much testing time. The sensitivity and specificity of this immunochromatography method exceed those of conventional immunochromatography, providing a more reliable diagnosis. The newly developed salivary immunochromatographic method is expected to serve as an effective device for diagnosing HBV infection.