Effectiveness of Conservative Treatment with Physiotherapy in an Adolescent Male with Scheurmann’s Disease: A Case Report

Study design: A single case study design Background: Scheuermann’s Disease is the developmental disorder of spine in which wedge shaped vertebrae of thoracic spine are found which leads to excessive curvature and postural abnormality that causes stiffness and pain in upper back and later compromise of respiratory functions and disability occurs. Objectives: To investigate the effect of spinal mobilization, breathing exercise and home exercises in an adolescent with Scheuermann’s Disease. Methods: This study was done on a 17 years old boy with the complaint of severe low back pain. An exercise program was given for 45 minutes for 8 weeks which included postural correction, strengthening and breathing retraining with chest expansion exercises. The changes in pain was evaluated by NRPS, muscle strength by MMT, Cobb’s angle by X-ray and functional ability was assessed by Roland Morris Disability Questionnaire Results: Results of the study showed that patients improved with his pain, muscle strength, and functional abilities. Dyspnea of the patient also improved with breathing retarining. Conclusion: From this study it is concluded that spinal mobilization and breathing retraining with chest expansion and practicing these at home helps to relieve pain and reduce disability in patients with Scheuermann’s disease.

Scheuermann’s disease is a deformity of thoraco lumbar spine generally seen in adolescent males in which patients have an increased kyphosis. Such patients generally suffer backache, reduced flexibility, deformity, kyphotic angle >40-54°, wedging of at least 3 consecutive vertebra and irregularities in vertebral end plates with loss of disc height is considered as the radiographic criteria for diagnosing Scheuermann’s disease [1]. In rare cases Cardio respiratory fitness may also be involved. Physical examination reveals reduced flexibility of spine especially extension, increased kyphosis, exaggerated lumbar lordosis, weakness of extensor trunk muscles. Besides physical disability and poor fitness, cosmetic appearance might lead to social isolation making the integration of these adolescents difficulty in society. A study by L Ristotaiaen found that patients with scheuermann’s disease had a higher risk for back pain & disabilities during ADLs than controls [2]. Scheuermann’s disease was originally defined as growth disturbance of thoracic spine, characterized by rigid hyper kyphosis due to wedge shaped vertebral bodies. The reported prevalence of Scheuermann’s disease ranges from 0.4 to 8 %. Failure of vertebral end plate ossification due to errors in collagen aggregation, genetic factors, increase release of growth hormone, have all been suggested by different authors to the etiology behind Scheuermann’s disease [3]. Conservative treatment in the form of rest, bracing, physical therapy, casting is generally recommended for management for Scheuermann’s disease. Persistent pain curves > 70° and non response to conservative treatment calls for surgery in patients with Scheuermann’s disease which is generally spinal fusion or cord decompression in case of neurological involvement. The aim of the present study was to investigate the effect of spinal mobilization, home exercise program and breathing exercises in a 17 year old male who presented with back pain, stiff spine and difficulty in breathing on exertion in a Physiotherapy OPD on Cobb’s angle, quality of life, core muscles strength and pulmonary functions.

The patient was a 17 year old boy with a height 168 cm and weight of 55 Kg. He visited Orthopedics OPD of a private Hospital with a complaint of severe back pain which gradually increased since last 6 months. Patient gave a history of playing football occasionally and during twisting, bending movements of spine experienced pain and stiffness. There was no history of trauma or any other relevant family and medical history. He was advised pain killers to manage his pain and was referred to Physiotherapy department for further management. He also complained of stiffness in spine, difficulty in performing Activities of Daily Living (ADL’S) and upon questioning he also complained of difficulty in breathing on exertion, stair climbing, jogging, and playing with friends. He was advised to get his X-ray done of Thoraco Lumbar Spine (anterior & lateral view). The initial radiographic findings showed his Thoracic Cobb’s angle was 65 degrees (T1-T12) and at least 5 vertebras were wedged from T6-T12. His Lumbar Lordosis was measured with a Cobb’s angle of 50 degrees (Figures 1, 2 and 3). Detailed musculoskeletal and neurological examination of the patient was done. On Observation it was found that patient had rounded shoulders, protracted scapula. He also had a thoracic angulation. There was an exaggerated compensatory lumbar lordosis. There was tenderness from mid thoracic to upper lumbar spine on palpation. There was no neurological deficit. Bilateral hamstrings were found to be tight. Trunk translation was measured in sagittal plane using an inch tape from T1-S1.Chest expansion was measured using tape in upright sitting position at 3 levels-axilla, sternum and lateral coastal region. He experienced lower back pain with a grading of 8 at Numeric Pain Rating Scale (NRPS). Disability was measured using Roland Morris Disability Questionnaire and muscle strength was measured by MMT for erector spinae and abdominals. Since patient complained of difficulty in breathing on exertion it was decided to get his pulmonary function tests done to check for any decline in his Vital Capacity. A Spirometer was used to measure Pulmonary Function tests. Using a maximum effort expiratory spirogram FVC, FEV1, FEV1/FVC was measured. Dyspnea was measured using Modified Borg Scale. 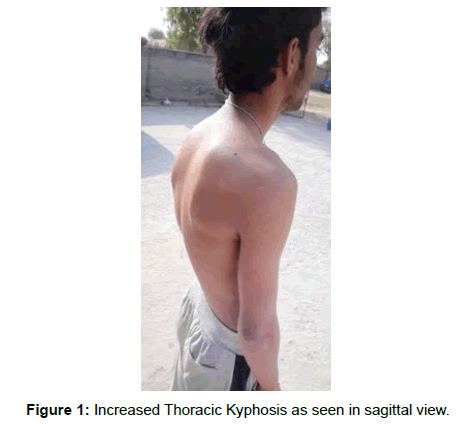 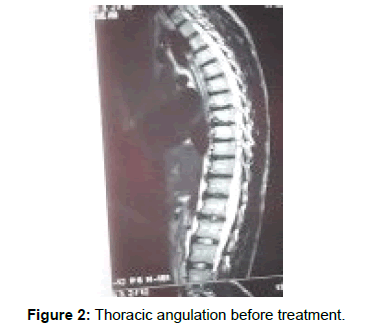 Physiotherapy management aimed to relieve his symptoms, correct his posture and improve his vital capacity which was mildly reduced. It included an exercise program which lasted for around 45 min and was designed based on patient assessment & findings. The Physiotherapy intervention was designed to increase spine mobility, increase strength of core muscles, stretch hip flexors and hamstring and improve pulmonary functions [4].

1. Scroth exercise program was given to patient for treatment of Kyphosis, In this patient uses active corrective trunk muscle forces and learns to maintain erect posture [5].

2. Exercises based on the principle of BSPTS for correction of scoliosis were also given [6].

10. Patient was also advised to wear hyperextension brace for most of the time.

Additionally a home based exercise programme was also given to patients with the help of a manual which had similar exercises with pictures and instructions to perform these exercises.

The readings were taken at baseline, 4th week and last day of 8th week. The patient experienced significant improvement. The thoracic Cobb’s angle was reduced to 540 and lumbar lordosis Cobb’s angle to 450. Pain of the patient as measured by NPRS reduced from a reading of 8 to 0 at 8th week. RMDQ score reduced from 15 to 3. Thoraco Lumbar expansion improved for all rangesflexion 5.5 cm, extension 3 cm, right side flexion 10 cm, left side flexion 9 cm, right rotation 4.5 cm, left rotation 5 cm. The back extensor muscle strength improved to grade 4+. The hams length also improved from 12.21 cm to 16.12 cm for right leg and left leg by 11.13 cm to 15.31 cm as measured by sit and reach test (Table 1). The improvement in FVC & FEV1 was from 2.80 L to 3.35 L, 2.10 L to 2.84 respectively (Figure 4). 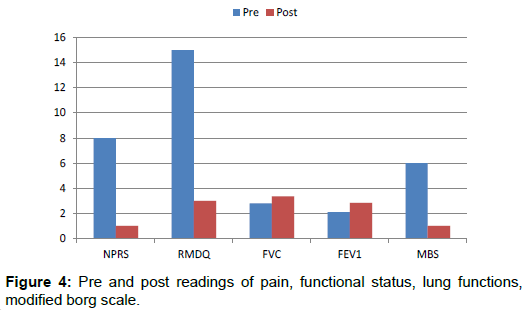 The findings of our study suggest that a comprehensive Physiotherapy programme based on findings of patient was successful in improving pain and disability of patients. Posture correction, stretching of specific muscles, core stabilization, breathing exercises and a home exercise programme which included precautions and similar exercises helped in reducing the symptoms of the patient. Overall patient’s pain was relieved; spine ROM increased, functional performance was better and lung functions improved. It is suggested that Breathing exercises and Inspiratory Muscle Training should also be included in the management of such patients as the altered posture might result into altered respiratory functions. Breathing retraining helped in improving Vital Capacity of the lungs and the dyspnea of the subject also improved. Adolescents with vague Low Back Pain should not be neglected. There is no recipe of treatment for patients with Scheurmann’s disease. A delay in treatment can result into pain and significant disability in the later stages. Early diagnosis timely intervention and more importantly an individualized treatment programme based upon the findings of the patient would bring a better prognosis.