Feasibility of Medical Infrared Imaging in the Emergency Department

4Department of Physics and Astronomy, University of Leicester, UK

Background: Medical Infrared Imaging (MII) is an investigative method that can be used to non-invasively detect specific heat signatures associated with disease. There is the potential for this technique to be used in emergency care, and we have developed a protocol for the use of MII in the Emergency Department (ED). However, it is not known if this procedure is feasible in an ED setting. Methods: The Leicester MII protocol was used to image the arm in 68 Emergency Department patients. Feasibility was assessed by the proportion of patients with successful image acquisition. Results: When the protocol was used in the ED, images were obtained in 100% of subjects. Conclusions: It is feasible to undertake MII in an ED setting. A standardised, yet practical protocol has been successfully developed and feasibility tested. This ‘Leicester ED MII Protocol’ is proposed as the standard for future thermography in emergency care, to allow studies to be comparable.

Thermography is a non- invasive investigational method that uses infrared radiation to detect heat patterns across the skin [1]. Temperature measurement has been a cornerstone of medical diagnosis for more than 100 years [2,3], and is a routine part of the ‘Observations’ that are made in every sick patient who attends an Emergency Department. However, MII is not used in Emergency Department screening or diagnosis, despite being widely used to screen for acute febrile illness in travellers at airports.

There are no standardised protocols for the use of MII in the ED. Existing MII thermography protocols have been developed in strictly controlled laboratory-type environments, using mainly healthy volunteers as recruits or using limited numbers of ambulatory patients [4]. In the laboratory controlling all aspects of the environment reduces variation in thermal images (increasing signal to noise ratio), and is often seen as a ‘gold standard’ approach. However, to determine if MII is useful in clinical care it has to be tested in the real world. It is not possible to move acutely unwell patients into a laboratory, and is not possible to create such tightly controlled laboratory conditions within an ED. Therefore, before the potential clinical utility of thermography can be explored a sufficiently standardised, yet practical protocol for imaging has to be developed.

We have previously described the derivation of a MII protocol thought to be suitable for an emergency care environment [5]. The objective of this study was to test the feasibility of this new protocol for MII in the Emergency Department.

The feasibility of the ‘Leicester ED MII Protocol’ was tested over a 3-month period in the Emergency Department of Leicester Royal Infirmary. Ethical approval was granted by East Midlands (Nottingham) Research Ethics Committee 2 (12/EM/0178). As this was a feasibility study a formal sample size calculation could not be carried out.

Each imaging session was carried out in the patient’s bay in the ED and lasted about 20 minutes. A FLIR T650sc camera [6] was used, with thermal sensitivity of <30 mK at 30˚C and optimum operation within a range of -40˚C to +150˚C. Internal stabilisation of the system was performed by switching the camera on 2 hours prior to imaging. Suitable patients were approached and informed consent was obtained. As this object of the study was the feasibility of the imaging method the presenting complaint / underlying condition did not determine study inclusion.

The patient’s most available arm (free from medical intervention such as a blood pressure cuff or cannulae) was selected for imaging. Patients were asked to expose this arm, either by changing into a hospital gown or by removal of outer clothing. Once the arm was exposed a 5-10 minute acclimatisation period was undertaken. Background thermal noise was reduced by hanging a plain white sheet behind the patient’s arm. Individuals not being imaged were requested to leave the field of view.

Patients were asked to hold their arm out in a horizontally extended position, the camera was manually focused and the image was acquired. If patients were medically and physically well enough, an image of the posterior surface of the arm, held in extension was also attempted. Images were stored directly onto the FLIR camera using a patient demographic table, which included patient ID, local temperature and local humidity levels.

The thermograph images were produced as artificially coloured maps of heat distribution, with each coloured pixel representing a single temperature point measurement. Images were standardised and stored for data extraction. A colour gradient scale bar was produced with each image; a white colour demonstrated warmest areas, whereas a black colour indicated cooler regions. The proportion of patients who had successful image acquisition was calculated.

In the ‘Majors’ area of the Emergency Department 120 patients were approached and 68, 26 men (38%) and 42 women (62%), agreed to be recruited. The patients had a wide variety of underlying conditions. Using the ED MII Protocol developed in the volunteer study, thermal images were successfully acquired in all 68 patients, however due to technical faults with the equipment, data transfer and extraction errors occurred in 12 patients, so final data from 56 patients were available. This failure of data transfer was a technical fault in the camera software, and not related to the imaging protocol – the ED MII protocol for image acquisition was successfully applied in 100% of patients.

In the early stages of recruitment, space constraints in the ED were a problem; initially it was proposed that patients should rest their arm on a stand and that the camera should be mounted upon a tripod. We found that this approach was not practical in a busy ED due to the constraints of space. A handheld camera was therefore used with the operator standing at a constant distance (2 meters) and making as much adjustment for variation in patient height and position as possible, in order to achieve a consistent angulation between each patient and the thermal imager.

Initial experience in this patient study rapidly confirmed that it would not be feasible to image the posterior surface of the patient’s arm due to the restrictions of space in an ED cubicle and the inability of many patients to easily move around on the trolley. However, even in a busy Emergency Department it was possible to obtain an anterior arm image in 100% of recruits. Although we did not constrain the side of the body imaged, practically it was always easier to image the right arm as ED cubicles are set up to enable the clinician to perform clinical examination from the patient’s right (so in most ED cubicles there is a wall to the patient’s left precluding easy imaging of this side). It would have been feasible to image both arms (with extra time to move the trolley and reset the equipment), however it is difficult to see that additional clinical information would be obtained. From our experience it would have also have been easy to obtain a full-face image.

From the successful thermal image acquisition in 68 patients we conclude that it is feasible to undertake Medical Infrared Imaging in an acute care setting. The failure of image transfer in 12 patients was a software fault unrelated to the imaging protocol. Given the constraints of the emergency care environment, it will never be possible to fully conform to the laboratory standards set for MII [7,8]. We have standardised as far as possible, but incomplete standardisation may introduce variability or ‘noise,’ which might limit the practical utility of the ‘Leicester ED MII Protocol’, however this is an inescapable fact of working in a clinical environment.

The angle between the camera and the area of the body was less constant than in an imaging laboratory. Patients were imaged whilst sitting up on an ED trolley, giving a ‘straight on’ view of the arm. However, as some patients are not able to sit fully upright a ‘straight on’ view may not always be possible. Subtle variations in angulation between the arm and the thermal imager may make image interpretation difficult, and may be a limitation of this technique, as it is the sicker patients who are unable to sit upright. An adaption of the protocol with an overhead camera and a recumbent patient is currently being developed.

The distance between the camera and the subject was measured, however with a hand held camera in a busy environment there is bound to be some (few centimetres) inaccuracy. This might cause some variation in results, but unlikely to be large. The thermal background in an Emergency Department is also poorly controlled, as many EDs are not air-conditioned. Changes in environmental heat and humidity, particularly in the summer months, might affect thermal images either by a direct effect on the imaging equipment or by changing the heat patterns seen in the patients.

The utility of a diagnostic method is determined by the pragmatic consideration of whether or not useful information is given to the clinician despite the variation (a high ‘signal to noise ratio’). If there is a strong enough diagnostic signal then variation caused by the limitations of the imaging protocol will not be important. This will only be found by future clinical disease studies.

A standardised, yet practical protocol has been successfully developed and it is feasible to undertake Medical Infra-red Imaging (MII) of patients in the ED setting. We suggest that the ‘Leicester ED MII Protocol’ (Box 1) is used for ED thermography, to enable future studies to be comparable and allow the potential of MII in emergency practice to be further evaluated. 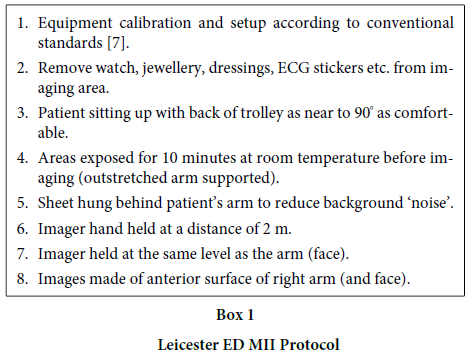