Background: The huge burden of HIV/AIDS in sub-Saharan Africa has been associated with increased prevalence of malignant conjunctival tumours especially squamous cell carcinoma (SCC). In Nigeria, the national HIV sero-prevalence is 3.4%, and values in the South-South geopolitical zone where this review was performed ranges from 4.1% in Delta to 10.9% in Akwa-Ibom state. Aim: To review HIV and conjunctival tumours in patients seen at the University of Calabar Teaching Hospital (UCTH), Calabar Methodology: This retrospective clinic review of demographic data, clinical features, HIV sero-status and histopathologic findings in patients with conjunctival tumours seen from January 2005 to December 2014 including Ophthalmology clinic records and pathology request forms were analysed Results: A total of 32,102 new patients were seen in the ophthalmic outpatient within the study period, of which 108 patients comprising 57(52.8%) males and 42(38.0%) females had conjunctival tumours. Their ages ranged from 11-85 years, with a mean of 39 years ± 14.98. Histologically, eighty (74.1%) had Squamous cell carcinoma, ten (9.26%) Squamous intraepithelial lesion, six (5.56%) Papilloma, four (3.7%) Kaposis sarcoma, three (2.78%) Naevus and Melanoma each, one each (0.93%) had Conjunctival dysplasia and Lymphoma. The HIV status of only 55 (50.9%) could be ascertained having been documented in patients’ records of whom thirty-seven (67.3%) were HIV positive. Thirty four (>90%) of the HIV positive cases had squamous cell carcinoma. The other 3 patients had kaposis sarcoma, papilloma and conjunctival intraepithelial neoplasia(CIN). Conclusion: In Calabar, conjunctival squamous cell carcinoma is preponderant in HIV sero-positive patients when compared with the sero-negatives.

Sub-Saharan Africa is the region most severely affected by HIV with nearly 1 in 20 adults living with HIV and accounting for 71% of people living with HIV. Almost 70 percent of new HIV infections and approximately 74 percent of all AIDS-related deaths worldwide occur in this region [1,2]. The current Nigerian national HIV seroprevalence is 3.4% while 3.5(3.0-3.6) million are estimated to be living with the disease, the second largest in the world [3,4]. In Nigeria, the South-south geopolitical zone prevalence ranges from 4.1% in Delta state to 10.9% in Akwa-Ibom state with Cross River state having a prevalence of 7.1% [5].

Conjunctival tumours could be benign or malignant. They are the most common adult tumours in several orbito-ocular reviews and squamous cell carcinoma is the commonest malignant tumour [8-10]. Tumours may lead to visual loss or death if diagnosis is delayed. The clinical differentiation between benign pre-cancerous and malignant lesions is difficult and usually requires a biopsy for a definitive histological diagnosis. Although conjunctival tumours may arise from any type of the conjunctival cells, epithelial and melanocytic types are the most common. Epithelial tumours account for a third to half of all tumours, with higher prevalence in countries with larger actinic exposure [11].

Ocular surface squamous neoplasia (OSSN) is a term used in describing premalignant and malignant lesions, including conjunctival intraepithelial neoplasia (CIN) and SCC [7,12,13]. It is the most common ocular surface tumour with the highest incidence in Africa and the highest age standardized rate (ASR) reported from Zimbabwe (3.4 and 3.0 cases/year/100,000 population) for males and females respectively compared to a mean ASR worldwide of 0.18 and 0.08 cases/year/100,000 population for males and females respectively [14,15]. OSSN occurs in the younger age group in the tropics and is associated with HIV and human papilloma virus (HPV) infection probably due to compromised immunity [14]. This is a public health challenge in view of HIV pandemic, late presentation of tumours, high recurrence rate, diagnostic difficulties and malignant transformation [16-19].

A retrospective review of medical records of all patients who had conjunctival tumours surgically excised for histopathology within the study period (January 2005-December 2014) in the Ophthalmology department of the UCTH, Calabar was performed. Demographic data, histopathologic diagnosis, HIV sero-status obtained from pathology request forms and medical records were obtained for analysis. The Nigerian National Guideline on HIV screening and diagnosis was used in which positive results from two rapid diagnostic tests on a particular sample is considered as confirmatory. Discordant results are subjected to further tests using the UniGold (UG) RDT as a tiebreaker.

Histological sections of the conjunctival specimen were stained with haematoxylin and eosin and examined under a compound light microscope at x40, x100 and x400 magnification. Further confirmation of histological diagnosis including immunohistochemistry was performed only when necessary. Information extracted from patients’ records were entered into Microsoft Excel 2010 and exported into Stata version 12.0 for analysis (Table 2). Continuous variables are presented as mean and categorical variables as percentages. Chi square and Fisher’s tests were used to compare proportions across groups and T tests for continuous variables. A p-value of less than 0.05 was considered statistically significant.

Cancers such as Kaposis sarcoma, non-Hodgkins lymphoma, conjunctival squamous cell carcinoma, cervical cancers, and lung cancer have been on the increase since the advent of the HIV pandemic [27-30].

Conjunctival tumours are the commonest of the tumours of the eye and its adnexae with the non-melanocytic lesions comprising 47% of all excised conjunctival tumors [31]. This is similar to recent studies from East and Southern Africa. Our sample showed a larger percentage (74.1%) being of the squamous carcinoma type but more of OSSN. This is similar to other studies from Nigeria and other parts of Africa (Figure 2) [7,8,32,33]. Majority of the tumours in our sample were of the epithelial type which is in agreement with literature, as epithelial lesions are reported to be the second most common group of conjunctival tumours [13,31,34]. As the distribution of epithelial lesions is affected by factors such as geography, sunlight exposure, human immunodeficiency virus (HIV) and human papilloma virus (HPV) prevalence, the high number in our sample may have been due to any of these factors in addition to the reported high HIV prevalence in our region. The higher male preponderance in our sample is unusual in Africa as this is the pattern in temperate countries [13,14]. The pattern in Africa is higher prevalence in women due to a higher prevalence of HIV and HPV [14]. The difference(s) in our series may be attributable to a higher socioeconomic status and cultural preference for males which results in easy access to health facility and better care [35].

The age range of 11 to 85 years and a mean of 39 years ± 14.98 in this study are in keeping with other studies in Africa [36,37]. The age group most affected with conjunctival tumours in the study was the 30-49 years category which is higher than the study in Egypt but similar to that of Congo (Table 1 and Figure 1) [36,38]. However, the information on the age of patients was incomplete which is not unusual with retrospective studies. 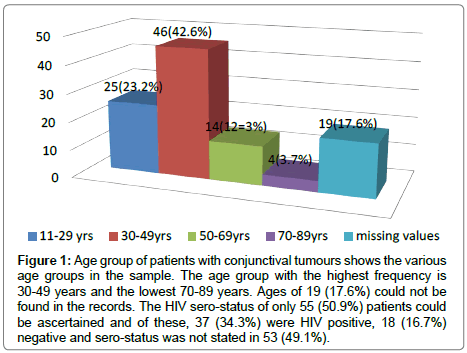 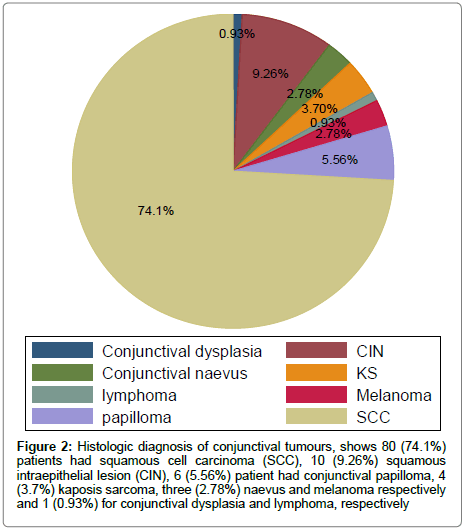 Table 2: Comparing HIV status and histologic diagnosis, shows the high frequency of a positive HIV status with SCC 34(42.50%) and the low frequency observed in other conjunctival tumours. This association was not statistically significant using Fisher’s exact test (p=0.122).

The frequency of sero positive patients was higher in the younger age groups which are related to a higher heterosexual sexual activity; the commonest route of HIV spread in Nigeria [4,5]. This agrees with studies in Nigeria and other parts of Africa [22,37,38]. The HIV status in 49% of our study population could not be ascertained either due to incomplete documentation or poor manual medical record keeping. This appears to be the major drawback of this study. This is not unusual with retrospective studies in the developing world setting with heavy dependence on paper records. This underscores the need for electronic medical records where such is feasible.

Malignant conjunctival tumour though not common is frequently encountered among the elderly in temperate regions but appear to assume a higher prevalence in the immunosuppressed and in younger persons in Africa [7,14,39] Conjunctival squamous cell carcinoma is the most common malignant tumour of the conjunctiva in the world and in Sub-saharan Africa [39]. Squamous cell carcinoma (HIV Positive patient with) occurs mainly in sub- Saharan Africa in 3.8- 7.8% of HIV patients and there has been an increase in its incidence since the advent of HIV (Figure 3) [27,40-42]. Our study observed a higher incidence of HIV among those with squamous cell carcinoma with an average age of 40 years ± 15.6 which is in keeping with studies in Africa where HIV prevalence has risen in recent years [26,37,43] Squamous cell carcinoma of the conjunctiva is more common in the tropics and is likely to present at an earlier age and with more devastating consequences in HIV patients [43-45] Although the exact cause of squamous cell carcinoma is unknown but human papilloma virus (HPV) has been implicated as immunosuppression and is suggested to encourage co-infection with papilloma virus. 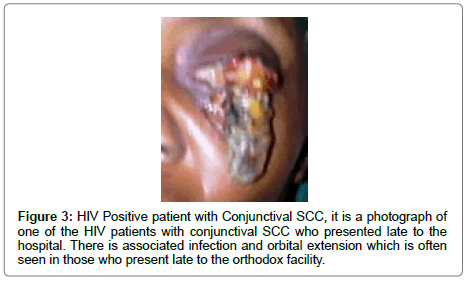 Figure 3: HIV Positive patient with Conjunctival SCC, it is a photograph of one of the HIV patients with conjunctival SCC who presented late to the hospital. There is associated infection and orbital extension which is often seen in those who present late to the orthodox facility.

There is a higher frequency of conjunctival squamous cell tumours in this study sample and is comparable to studies in other parts of Nigeria in HIV patients [6,16]. Studies in Kenya and Democratic Republic of Congo also revealed high prevalence of squamous cell carcinoma among HIV patients [18,38].

Squamous cell carcinoma was found to be more common in HIV positive patients in the study sample. This trend has been recognized as SCC along with KS involving the conjunctiva has now been recognized as AIDs defining tumours. With the high HIV seroprevalence (7.1%) in Cross River state, Ophthalmologist should have a high index of suspicion for SCC when confronted with conjunctival mass lesions. Review of the medical record system, introduction of electronic medical records and retraining of the staff for better record keeping should improve patient experience and support audit and clinical governance. As a follow-up, a prospective study will be undertaken so that a clearer picture of the situation will be documented for better planning on preventive strategies.

We thank Mr. John Ale for data entry and the medical record staff for their assistance in retrieval of medical records of the patients.