Background: The inflammatory omental pseudo-cysts are very rare and there are few reports on this subject especially when it occurs after traumatism. The objective of this article is to present a case and the management options and immediate results.

Clinical Case: We present a case of a 47- years-old patient with abdominal pain, lack of appetite, nausea, diarrheas since 3 weeks. He was diagnosed with a large pseudo-inflammatory cyst treated initially by percutaneous radiological drainage with initial and short-term success and in a second time resection by laparoscopic approach.

Conclusions: The echography is the first-intention exam but the CTscan allows a better characterisation of the lesion and the relation with the other abdominal organs. The surgical treatment proved to be the most reliable attitude despite the initial conservative attitude

The omentum is a double-layered extension of the peritoneum that connects the stomach to adjacent organs. Beside the physiological functions- (visceral fixation and protection against any peritoneal abnormality the omentum is frequently involved by infectious, inflammatory, neoplastic, vascular, and traumatic processes [1,2]. It’s composed of a semi-mobile fatty tissue with small vessels - the gastroepiploic vessels. The thickness varies, and generally is in relation to the patient’s BMI [3,4]. The primary diagnostic method for evaluation of omental diseases is computed tomography [1,5].

The inflammatory pseudo-cysts are very rare and there are very few cases in the literature on this subject.

We report an unusual case of a 47-year-old male of pseudo-cystic formation in the greater omentum with significant clinical symptoms.

A 47 years old male was admitted to the emergency unit of our hospital with abdominal pain, lack of appetite, nausea, diarrheas for 3 weeks. The patient was treated for urinary infection with Furadantine. The medical history found paraplegia after a complex poly-traumatism in 1978, leg fracture operated in 1990. In 2012 the patient realized a CT-scan of control where no lesions were found.

On arrival, his vital signs were 37.9ºC, 95 bpm and 118/76 mmHg, O2 saturation 99%. The physical exam revealed generalized abdominal sensibility without abdominal guarding and sensation of abdominal mass with extension from the epigastric area to hypogastric area. The Giordano sign was found positive on the right side. The cardiorespiratory exam revealed no anomalies. 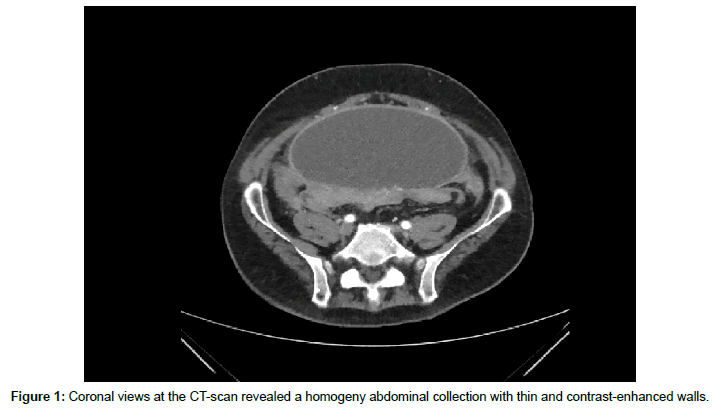 Figure 1: Coronal views at the CT-scan revealed a homogeny abdominal collection with thin and contrast-enhanced walls.

The drainage of the collection was performed under echography with exteriorization of 2.5 l of clear liquid (Figure 2). Bacteriological exam was negative at 48 hours and urea, creatinine, amylase and lipase dosage were also negative. Pain killers were administered and patient show good outcomes and were discharged 7 days after. An operation was planned 3 weeks later. No antibiotics were added. The patient presented a good evolution and he was discharged on 25/12/15 at his demand. A laparoscopically exploration of the peritoneal cavity was programed in 3 weeks. Figure 2: Radiological drainage of the collection under echography.

The patient arrived in emergency 2 weeks later with epigastric and right hypochondria pain associated with nausea and vomiting since 24 hours. The patient was constipated since 3-4 of days and the last episode of bowel movement was that morning. The vital constants were normal. The laboratory exam found leukocytosis (17,270/mm3) and C-Reactive Protein- 28. The clinical exam found a distended and diffuse sensibility of the abdomen. CT-scan showed a collection at 10.9 cm axial/15.7 A-P cm and the proximal part of the jejunum dilated at 53 mm (Figure 3). Figure 3: Axial views at the CT-scan showed an abdominal collection and a dilatation of the proximal part of the jejunum.

On 19/01/2016 the patient was operated. A laparoscopic exploration was performed. Laparoscopy shows very important adherences and the great omentum was applied on the anterior abdominal wall with a pseudo-cyst who contains pus and necrotic omentum with an inflammatory wall around (Figure 4). We excised all of the inflammatory mass. The postoperative course was uneventful except for a urinary infection. The patient resumed oral intake on the 2nd postoperative day and was slowly progressed to soft diet.

The lesions of the great omentum are very uncommon. The mesenteric cysts [2] or the omental cysts [6,7] are well described in the literature even if they are rare ( general frequency of 1:140,000 general hospital admissions and about 1: 20,000 pediatric hospital admissions [8,9]. The omental torsion with necrosis [4] and inflammatory process is also cited- idiopathic (favorised by a medial tight insertion on the transverse colon) of abdominal inflammatory process. The discussion can turn around a suspicion of encysted ascites especially if is on the medial position [10]. Large intraabdominal cysts may mimic ascites [6]. Exceptionally, cases of anemia associated with omental torsion and hemoperitoneum have been reported in children [11]. Infections such as actinomycosis or paragonimiasis may manifest as solid or cystic mass lesions [1].

The anatomo-pathological exam confirms the inflammatory nature of the pseudo-cyst. Cases with posttraumatic pseudocyst of the greater omentum was cited in the literature [12,13] developed in relation to solid abdominal organs and originate as a result of the organization of fluid or blood collection after trauma in our case, it doesn’t seem related to his 4 years before trauma. The pathogenesis for us is not very clear but is more likely to be a secondary one [14]. In a series of a 1500 of patients with acute inflammatory involvement of the greater omentum a primitive etiology was revealed in 8-10% of cases and secondary one in 90-92% [9]. We do not identify any factors - predisposing or triggering beside the trauma in the past [15].

Diagnostic tools include abdominal contrast enhanced computed tomography and/or ultrasound [9,16] and can give a good characterization of the lesion.

We decided to remove all the inflammatory tissue and the pseudoinflammatory wall and to realize an extensive adhesiolysis. Normally the cyst is a benign entity and the surgical strategy should be different from that for malignancy. A laparoscopic exploration with high risk of conversion was programmed. There was a contradiction between the per-operatory signs of a major peritonitis in the past due to the extensive adherently syndrome and the patient anamnesis who do not recall to had any major abdominal pain. At the end the operation was realized entirely laparoscopically but the technical level of difficulty was high. We left a drain in place for 24 hours because of the adhesiolysis, to avoid a residual hematoma [2] especially as a way of surveillance of the peritoneal cavity for any unseen bowel lacerations [17-19].

The patient had no event post-operative evolution and was discharges 4 days after.

We present a case of a large pseudo-inflammatory cyst treated initially by percutaneous radiological drainage with initial success. The surgical treatment proved to be the most reliable attitude despite the initial conservative attitude. CT-scan for us is the most efficient for the diagnostic and allows a good characterization of the lesion and the relation with the other abdominal organs. We think that the conservative approach must be the first intention because of the low morbidity for the patient if there are no peritoneal signs or the biology is not severely altered. If the conservative treatment fails than surgery must not be delayed. The simple excision is enough for the definitive treatment.