Pyocyanin is one of extracellular pigments produced mainly by clinical and environmental isolates of P. aeruginosa [1,2]. It plays an important role as a virulence factor during pathogenicity of this bacteria [3] and as an antimicrobial agent against several types of other bacteria and fungi [4,5]. Regulation of pyocyanin production is usually under the control of quorum sensing (QS) activity that has an important role in bacterial communication through several signal molecules [6]. Synthesis of pyocyanin is mainly encoded by phzM and phzS genes of phz operons through regulation of transcriptional activity of MvfR gene [3,7].

Essential oils of different plants are recorded to have an ability to inhibit pyocyanin synthesis through an effect on QS. Ferula oil prevents QS of P. aeruginosa from producing pyocyanin and other products at 25 μg/ml [3,8]. Lower concentration of other oils could also perform such type of inhibition as with cinnamon oil at 0.1-0.2 μl/ml [9]. Meanwhile, reduction of pyocyanin expression needs a higher concentration (15 mg/ml) of Ocimum gratissimum leaf oil [10].

QS activity of P. aeruginosa represented by pyocyanin production was investigated after treatment with different types of essential oils.

Pseudomonas aeruginosa was isolated from male (44 years) with urinary tract infection while admitted in Al-Ammam Al-Hussein Medical city of Karbala in January 2017. The isolate was cultured on Mueller Hinton agar (MHA) (Himedia, India) for 24 h at 37°C. Pyocyanin with blue color was clearly observed in bacterial culture media. P. aeruginosa was diagnosed based on biochemical characters of API 20 E (BioMérieux, France).

The isolate was cultured in Luria-Bertani (LB) medium for 24 h at 37°C. Cell density of bacteria was adjusted to 1.5 × 108 cells in each ml of sterilized normal saline after matching with the 0.5 McFarland standard [11]. Different concentrations of essential oils (1, 3, 5, and 10 μl/ml) were prepared by mixing with ethanol. Well-diffusion method was used for antibacterial assay [12]. A 0.1 ml of standard bacteria was spread on MHA plate and 6 mm wells were made by sterile cork borer. Four wells were made in a single inoculated plate. In each well, 100 μl of essential oil concentration was added. Media with either of an essential oil or distilled water were used as a negative control. Gentamicin dissolved in sterile D.W (10 μg/ml) was used as a positive control. Cultures were incubated for 24 h at 37°C and inhibition zones were measured.

Determination of MIC was performed according to NCCLS method, M7-A5 [13]. A 100 μl of standard bacterial suspension was inoculated into each single well of microtiter plate (96 wells). Serial two-fold concentrations of essential oil were prepared and 100 μl of each one was added into inoculated wells. For each test plate, two essential oil-free controls were included, one with medium alone and the other with medium inoculated with bacteria. Plates were incubated at 37°C and read visually after 24 h of incubation.

A vial with 2 ml of LB medium and 100 μl of essential oil concentration was inoculated with 100 μl of standardized bacteria. Cultures were incubated for 48 h at 37°C. Pyocyanin concentration was measured according to protocol mentioned by Kalia et al. [9]. Briefly, supernatants from P. aeruginosa culture grown in the presence or absence of essential oil were collected. Pyocyanin was extracted using chloroform, followed by 0.2 M HCl. The absorption was measured by a UV-spectrophotometer (ABEL, Japan) at 520 nm.

All of the experiments were triplicated. The data were analyzed statistically by analysis of variance (ANOVA) test. The minimum level of (p) value was <0.01 which was considered significant.

Table 3: Production of pyocyanin in media with essential oils. 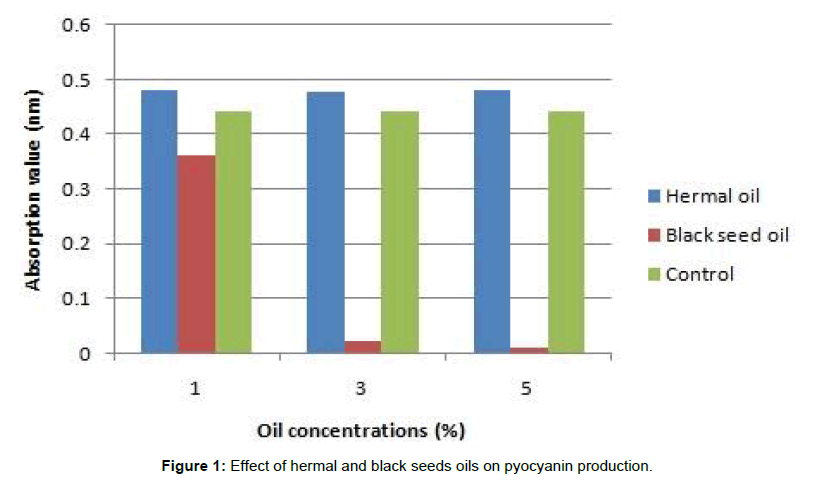 Quorum sensing (QS) is a communication path connecting microbial cells with each other by special signals in order to coordinate motility, virulence factor production, and biofilm formation [6]. In P. aeruginosa, QS stimulates production of several types of pigments as virulence factors such as pyocyanin and pyovardine [8]. Pyocyanin is a blue extracellular-pigment that is synthesised under the control of phz operons and MvfR gene through the synthesis of QS quinolone molecules [3,7]. About 25% of clinical and 38.2% of environmental isolates of P. aeruginosa have the ability to produce pyocyanin, while 3.2% of these are non-pigmented [2]. Antimicrobial activity is the first function of pyocyanin against a wide range of microorganisms giving P. aeruginosa a competitive advantage over other organisms [4,5]. The second function of pyocyanin is represented by its role as a virulence factor through increased intracellular levels of reactive oxygen species (ROS) [14].

QS was found to be affected by many natural essential oils. Pyocyanin production as one of QS activities is also reduced by some of these essential oils such as with the oils of Ferula, Cinnamon, pungent (6-gingerol), Ocimum gratissimum, peppermint and clove [3,8-10,15-17].

In the present study, radish, linseeds, and black seeds oils exhibited an inhibitory action on pyocyanin production. Antibacterial activity of different parts of the radish plant against P. aeruginosa was recorded by several studies [18-20]. This inhibitory activity may relate to the plant contents of alkaloids, flavonoids, glycosides, phenols, tannins, saponin, sterols and proteins [19,20]. Essential oil of radish that blocked QS activity as indicated by inhibition of pyocyanin production is mainly composed of pentyl hexyl, 4-methylpentyl isothiocyanate, dimethyl disulfide, methyl methanethiosulfinate and 1-methylthio-3-pentanone [18].

Black seeds oil was found to have antibacterial activity against different types of bacteria and fungi [28-33]. P. aeruginosa and its multi-drug resistant isolates revealed more sensitivity to black seeds oil which has a bacteriostatic action [28,30,31,33-36]. Essential oil of black seeds is composed of large amounts of fixed oil and less of volatile oil [32]. Generally, the main chemical components of black seed oil, which are related to its antibacterial activity are thymoquinone, thymohydroquinone, dithymoquinone, thymol, carvacrol, nigelline-N-oxide, nigellicine, nigellidine and alphahederin, oleic acid, monoterpenes, sesquiterpenes, polyphenols and aromatic aldehydes [30].

Hermal oil revealed no activity against the growth of P. aeruginosa or its production of pyocyanin, even at high concentrations. These results were also proved by another study [37]. Extraction of Peganum harmala seeds exhibited antibacterial effects on various bacteria, including P. aeruginosa [38-40]. The MIC value of seeds extract against P. aeruginosa ranged from a low value (15-50 μg/ml) to a high value (50-400 mg/ml) [38,39,41]. However, hermal oil contains many components with a potential antibacterial activity such as oxygenated monoterpenes and sesquiterpenes [41].

Essential oils of radish and linseeds have antibacterial action against the growth of P. aeruginosa and its production of pyocyanin. Hermal oil has no effect on pyocyanin production with less effect on bacterial growth.

Funding and Conflict of Interesting

There is no conflict of interest and funding for this manuscript.