Dalia A Nigm1* and Marwa A A Galal2

Objectives: We identified that type 2 immunity stimulation has been associated with the pathogenesis of Systemic lupus Erythematous (SLE), so we studied serum level of IL 25 and its relation to SLE activity, clinical and laboratory characteristics. Methods: Serum from 90 patients who met the American College of Rheumatology (ACR) criteria for SLE and 40 healthy controls was tested for IL 25 level by Enzyme Linked Immunosorbent Assay (ELSIA). Clinical and laboratory characteristics and disease activity using SLE Disease Activity Index (SLEDAI) were also assessed. Results: IL 25 serum level was signi?cantly higher among SLE patients than healthy controls. It has statistically signi?cant correlation with disease activity. Conclusion: Our data indicates that IL 25 level is elevated in SLE patients in comparison to healthy controls and is correlated to high disease activity, potentially being a biomarker predictive for disease activity in SLE.

Systemic lupus erythematous (SLE) is a chronic autoimmune disease happen with diverse autoantibodies against self-antigens and affects different organ systems. It has been identified that dysfunctions of the immune system, such as imbalance between Th1/Th2 cytokines is an important factor in SLE pathogenesis [1]. There are contradictory data about predominance of responses by Th1 or Th2, but a rise in Th2 responses is apparent in SLE [2].

Nearly all IL-17 family members have pro-inflammatory role, whereas IL 25 has a different function which stimulate the development of type 2 immune responses (Th2) [5]. IL 25 has receptors (IL-17BR) which are greatly expressed in vivo by stimulation of Th2 cells [6].

Fort et al., [7] was the first one who determines IL 25 by a study performed to analyze the sequence homology in cytokine IL-17 DNA. The sequence of IL 25 is 16-20% consonant to that of IL-17, exposing its particular function. Actually, this cytokine has a stimulatory effect for Th2 cells [8]. IL 25 can also have stimulated the secretion of other cytokines. For example, production of IL 25 in human and mice or injection and induction of IL 25 to animals caused the secretion of high levels of Th2 cytokines, involving IL 13, IL 4, and IL 5 [9]. In addition, by stimulation of transcription factor NF-KB, IL 25 activates the production of IL 8 cytokine in kidney cells. However, the function of this cytokine in renal diseases is still not being interpreted [10]. This cytokine also increases serum secretion of IgA, IgG1 and IgE antibodies, blood eosinophil’s, and eosinophil aggregation in liver [11].

As most autoimmune diseases arise from disruption of balance between the immune cells, in case the autoimmune disease arises from Th1 cells, injection of IL-25 advances differentiation of Th0 to Th2 cells and assembly of their cytokines can be effective in amelioration of the disease [12].

In this study, we investigated the expressions of IL 25 in the serum of SLE patients and evaluated the correlation between serum IL 25 levels and clinical and laboratory values, as well as severity of SLE patients.

Ninety SLE cases and 50 healthy controls were included in this work. All cases were admitted to Rheumatology and Rehabilitation Department, Assiut University, Egypt. All subjects met the 1982 and 1997 American College of Rheumatology (ACR) criteria for SLE [13] at the time of recruitment, and were divided into two groups: 40 patients with LN and 50 patients with SLE according to the laboratory data. Controls were sex and age matched, and had no apparent history of SLE, all controls had normal ESR, meaning that they represent a non-inflamed subject. The patients’ written consent was obtained according to the declaration of Helsinki and the study has been approved by local ethics committee prior to their inclusion in the study.

Serum samples were withdrawn from each patient and control stored at –20ºC until tested. Serum IL-25 levels were analyzed by ELISA kits according to the manufacturer’s protocols (Human IL-25 ELISA reagent kit [Elab Science], Hon- gshan district, wuhai province, china). The results were represented as picograms per milliliter (pg/ mL). All samples were tested in duplicates.

The data were tested for normality using the Anderson-Darling test and for homogeneity variances prior to further statistical analysis. Categorical variables were described by number and percent (N, %), where continuous variables described by mean and standard deviation (Mean, SD). Chi-square test and fisher exact test used to compare between categorical variables where compare between continuous variables by t-test and Independent-Samples T test, Mann-whitney U, kruskal wallis test. A two-tailed p < 0.05 was considered statistically significant. All analyses were performed with the IBM SPSS 20.0 software.

The age of 90 subjects with SLE included in the study ranged from 22.5 to 43 years with a median of 28years. All of them are females (100%) for SLE patients. No statistically significant difference was observed between SLE patients and controls concerning age and sex.

Table 3: Laboratory characteristics of SLE patients with regard to the serum IL 25 level. 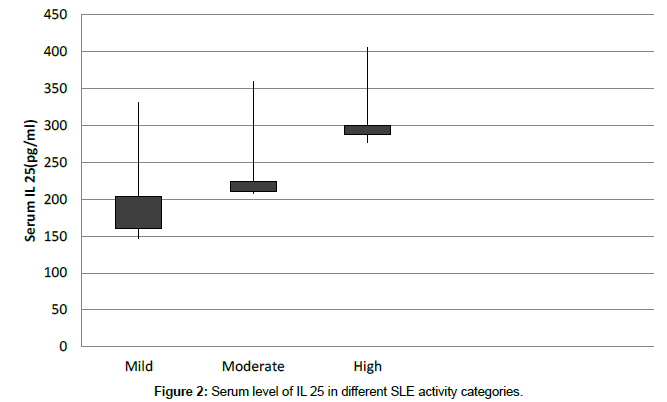 Currently, many studies reported the role of IL 25 in autoimmune diseases as an inhibitor of both adaptive and innate immunity and an anti-inflammatory cytokine [15]. In organ-specific autoimmunity, the equivalence of cytokines is an essential determinant of susceptibility and resistance. There is an important argument in SLE which is the imbalance between Th1/Th2 cytokines. However, there are conflicting opinions about superiority of responses by Th1 or Th2, a rise in Th2 responses is noticeable in SLE [16]. In SLE, the secretion of prion flammatory cytokines, for instance IFN γ, TNF α, IL 6 and IL 17 is observant to associate with disease susceptibility. Nevertheless, Th2 cytokines, like IL 13, IL 4 and IL 5, have been revealed to take an important role in alleviating and even prohibiting autoimmune diseases [17].

In the present study, all SLE cases are females which can be explained by the increased susceptibility may be due to differences in hormones and sex chromosomes [18]. We studied serum IL 25 level, a Th2 stimulating cytokine in SLE patients and analyzed their correlations with laboratory and clinical characteristics. Our results found significant high level of IL 25 serum in SLE patients when compared to controls (Table 2).

Table 5: The effect of high IL 25 on the risk of SLE analyzed by logistic regression.

Previous study reported that IL 25 has an important role on treatment of autoimmune diseases in kidney patients [21], for example Adriamycin nephropathy (AN) which is a kidney disease characterized by proteinuria. This disease is aggravated by Adriamycin. Qicao et al., 2011 found that treatment of the cases with IL 25, the urinary loss of proteins significantly lower than in the mice without treatment [22].

So, other studies are needed to be done on SLE to further explain the role of IL 25 in the pathogenesis and treatment of these diseases.