Lumbar discectomy is done in increasing frequency worldwide. A rare event associated with this procedure is breaking of the disc forceps blade during discectomy. In majority the broken part of the disc forceps can be removed during the initial surgery. But, rarely, the surgeon’s attempts might be unsuccessful, resulting in intradiscal retained foreign body. Literature regarding this issueis scarce, although there might be cases that have been never reported because of the medico legal consequences. Furthermore, until recently, there have been no guidelines to address this complication. Herein, a middle age woman in whom the blade of disc forceps was broken during L5-S1 discectomy is presented. Her surgeon could not remove the broken blade, so it was retained. .Once the patient and her family became aware about this event, began to seek medical advice .In our institute, retrieval of the broken blade of the disc forceps became possible via transforaminal corridor. Thereafter, posterior screw rod fixation and L5-S1 interbody fusion was done.
To our knowledge, the reports about the broken surgical instruments being retained in the disc space are extremely rare complication of lumbar discectomy. Moreover, xtraforaminal or transforaminal corridor might an appropriate alternative option instead of anterior or anterolateral approaches.

With increased availability of MRI, the number of the patients who undergo lumbar discectomy are growing, with increased rate of the complications. Among the rare complication seen in lumbar discectomy, breakage of the surgical knife blade, cups of curette and the broken blade of disc forceps should be mentioned [1-5]. In majority of the cases the broken part of the instruments can be removed by the surgeon’s effort. But, in rare occasions, surgery might be unsuccessful, despite a few hours allocated for their retrieval resulting in retained foreign body [3,4]. Among the retained intradiscal broken instruments, broken surgical knife blade is the most reported one where curettes cups and disc forceps blade have been only mentioned in a few papers [1,2].

Migration of the intradiscal broken instruments toward the pelvic cavity or the spinal canal and in particular in broken surgical knife blade are one of the indication of their retrieval. Psychological reactions of the patient and the relatives as well as medicolegal consequences are other major indications of reoperation [3,4].

Traditionally, anterior or anterolateral corridor had been the most popular route for retrieval of the intradiscal foreign bodies [3,6]. However, extraforaminal route was proposed as a new option for this purpose by Rahimizadeh et al in 2013 [4]. Later, in 2016 Rahimizadeh and Hadadi proposed transforaminal corridor for retrieval of the foreign bodies [5].

Herein, we report a case with retained intradiscal retained disc forceps blade following L5-S1 discectomy in which the blade could be retrieved via transforaminal route. Subsequent to retrieval of the broken blade, screw rod fixation and transforaminal lumbar interbody fusion of the corresponding disc space was done, with respect to the removal of the pars inter-articularis, To our knowledge, this is the first detailed example of surgical removal of a retained intradiscal broken blade of a disc rongeur.

A -48 year old female was referred to our institute because of an intradiscal retained broken blade of a disc rongeur.

Three weeks earlier, she had history of L5 laminectomy and L5- S1 discectomy because of right S1 root radiculopathy for 3 months duration according to clinical exam and MRI findings. During the discectomy, the blade of the disc forceps was broken and lost in the disc space. Retrieving was unsuccessful despite two hours additional operative time. On admission, the patient’s chief complaint was low back pain, but actually, she and her relatives were agitated and worried about the consequences of this unusual complication. Her neurological examination was normal. 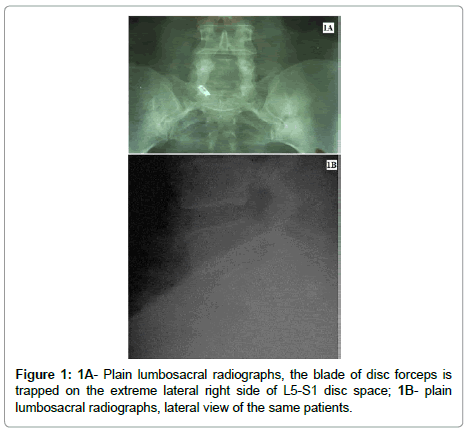 The original incision was reopened until the L5-S1 disc space could be reached on the right side. Initially, using magnification being provided by a microscope, extraforaminal portion of the corresponding disc space was re-explored via this window, but the blade was not observed. Therefore, the right pars interarticularis and the corresponding facet were removed. Then, retracting the dura medially, the remaining parts of the annulus was excised. Hopefully, via this new enlarged scene, the broken blade was identified easily and retrieved. Subsequently, with respect to pars removal and L5 total laminectomy, S1 to L4 screw rod fixation along with transforaminal lumbar interbody fusion (TLIF) of L5-S1 disc space were done.

Postoperative course was uneventful (Figure 3). At discharge, the patient was quite relaxed and satisfied. Hopefully, she didn’t filed medicolegal claim against her neurosurgeon. The broken instruments are rare hazards of lumbar discectomy [1-5]. These include the cups of curette, surgical knife blade and the blade of disc forceps [1-5]. Among these foreign bodies, the surgical knife is the most frequent where the remaining two have been only mentioned in some papers [3-5].

Rarely, other foreign bodies, such as bullet and piece of wood have been reported [6,7].

Lost broken objects can be usually retrieved in the same session, with enough time and patience allocating for this purpose. However, in rare instances even, despite consuming two to three hours additional operative time, retrieval might be impossible. In such instances further evaluation, for detection of the exact location of the broken object is necessary in which computerized tomography is the choice to locate the foreign body. In most of unsuccessful attempts, the broken object is hidden in extreme lateral portion of the disc space as it happened in our case. Review of the literature shows that in most of the cases in which reoperation is indicated the broken object is hidden in extreme lateral location, which make their visualization and removal quite difficult [4,5].

Despite lack of sufficient knowledge about the natural history of retained intradiscal metallic objects, the sequel of the such broken instruments are quite different. As lead poisoning and extensive granulomatous have been reported in different intradiscal foreign bodies [6,7]. Where the broken surgical knife blade usually tends to move toward the pelvic cavity or to the spinal canal with possibility of serious inadvertent consequences, in the cups of curette and blade of the disc forceps migration is less possible [4] However, unexpected biological and chemical reaction may occur in these objects even several years after the event [6,7].

The same is true for all intradiscal broken objects are not pure alloy and might undergo chemical changes resulting in granulomatous reaction [4].

There is currently no published guideline describing how to withdraw an intradiscal retained broken object or an unusual foreign body. There are only two articles that both propose the anterior strategy [1,6]. Apparently, an additional anterior incision is hardly acceptable to the patient or the relatives. Another drawback is that an access surgeon is usually required for that procedure [4,5]. Therefore, the posterior extraforaminal or transforaminal corridor might be an appropriate time consuming option for retrieval of a broken instrument [4,5]. Another advantage of this corridor is that all neurosurgeons are familiar with this approach. Moreover, reopening the previous incision reduce the likelihood of psychological and medicolegal consequences [4].

In summary, the hidden foreign object can be removed via extraforaminal approach, but once for better exposure of the intradiscal contents, resection of the pars becomes necessary, then transforaminal lumbar interbody fusion (TLIF), in combination with pedicle screw instrumentation will be required [4,5].

Written informed consent was obtained from the patient for publication of this case report and the corresponding radiographs. 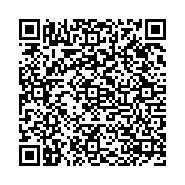