Background: Acute myocardial infarction (AMI) induces a pro-inflammatory status of the intramyocardial vasculature in which N?-(carboxymethyl)lysine (CML), an advanced glycation end product, and NOX2, a source of reactive oxygen species (ROS), play an important role. As such they form attractive therapeutic targets to prevent future heart failure development. Previously, we found that adipose tissue derived stem cells coupled to antibody-targeted microbubbles (the so-called StemBells (StB)) improved cardiac function when administered intravenously, also when applied early after AMI in a rat model. Its effect on the intramyocardial microvasculature however is unknown. In the present study we have analyzed its effect on both CML and NOX2 depositions in the intramyocardial vasculature in a rat AMI model.

Methods: AMI was induced by ligation of the left coronary artery followed by reperfusion in male Wistar rats. In a subset of these rats, intravenous StB were administered at day 1 [n=8] (group StB day 1), day 7 [n= 7] (group StB 7) or days 1 and 7 [n=7] (group StB day 1+7) post-AMI. Animals were sacrificed at day 42 post-AMI. The effect on CML (immunohistochemical score and/or the number of blood vessels with different intensity scores) and NOX2 positivity (the number of positive blood vessels) was then analyzed using immunohistochemistry.

Conclusion: StB therapy reduced the pro-inflammatory status of the intramyocardial vasculature post- AMI when applied in the acute phase post-AMI.

Heart failure (HF) development after acute myocardial infarction (AMI) is a leading cause of morbidity and mortality in the western world [1,2]. Post-AMI inflammation is playing an important role in the development of HF. One of the best characterized advanced glycation end products (AGE), Nε-(carboxymethyl)lysine (CML) [3] has been described in the intramyocardial vasculature before but also subsequent to AMI [4-6]. This suggest that AGEs not only play a role in the induction of AMI but also in the jeopardizing inflammatory response post-AMI and as such could even play a role in the process of re-infarction and/or HF development. CML accumulation has been associated with increased oxidative stress [7] and it has been shown that its accumulation coincides with the activation of NOX2 proteins, a source of reactive oxygen species (ROS) in the heart [8,9]. Inhibiting CML and/or NOX2 in the intra myocardial vasculature might thus form a putative therapy to prevent cardiac complications post-MI.

Adipose derived stem cells (ASC), have emerged as an important element of regenerative therapies [10] partly due to their capacity of paracrine secretion of a broad selection of anti-inflammatory cytokines, chemokines, and growth factors making them clinically attractive as an anti-inflammatory and immunomodulatory therapy [11-13]. To improve stem cell therapy, we have coupled ASCs to gasfilled microbubbles that were coated with antibodies to Intercellular Adhesion Molecule (ICAM- 1 ), to create the so-called StemBells (StB). ICAM-1 is increased on activated endothelial cells in the heart post-AMI and CD90 (an ASC surface marker). These injected StB, can be pushed against the vessel wall using ultra-sound to increase their adherence [14]. Intravenously injected StB significantly improved cardiac function on the long term (42 days post-AMI) in a rat model of AMI, even when applied at 1-7 days post-AMI when the post- AMI induced inflammatory response is especially high. However, intravenous injected StB did not show an effect on infarct size [15].

We used tissue specimen of a recent study in which the effect of the StB application was studied in a rat AMI model [16]. In short, eight-week old male Wistar rats (300-400 g, Harlan, the Netherlands) [17] were anaesthetized using fentanyl/fluanison (0.5 ml/kg) and midazolam (5 mg/kg). Subsequently, AMI was induced via ligation of the left anterior descending coronary artery (LAD). After 40 minutes the ligation was removed to allow reperfusion. All animal experiments were performed according to national guidelines and were approved by the Institutional Animal Care and local Animal Ethical Committee of the Vrije Universiteit (VU) University Medical Centre (Amsterdam, the Netherlands).

The rats were separated in 5 different groups: a control group (rats without AMI and without StB therapy, n=7), an AMI group (rats with AMI, without StB therapy, n=6), and three therapy groups (StB groups): rats with AMI and with StB therapy given either on day 1 post-AMI ( n=8), on day 7 post-AMI (n=9) or both on days 1 and day 7 (1+7) post-AMI (n=7). The StB (1 x 106 in 600 μl DMEM) were administered in the tail vein. Rats without therapy received a control injection of 600 μl DMEM. The rats were sacrificed 42 days post-AMI, and the hearts were excised and fixed in 4% formaldehyde and then paraffin embedded for immunohistochemical analysis.

Immunohistochemical staining for CML and NOX2

For immunohistochemical analysis, paraffin embedded heart slides, 4-μm thick, were deparaffinized for 10 minutes in xylene followed by dehydration with ethanol and incubation in methanol / H2O2 (0.3%) for 30 minutes to block endogenous peroxidases. Antigen retrieval for CML staining was performed by incubating the slides in 0.1% pepsin buffer for 30 minutes at 37ºC, for NOX2 staining by boiling the slides in a TRIS/EDTA buffer (pH 9.0) for 10 minutes. All sera and antibodies were diluted in Normal Antibody Diluent Solution (ImmunoLogic). The slides were incubated for 1 hour with a mouse anti-human CML antibody (1:500 dilution) [18] or a mouse anti-human NOX2-antibody [19]. After washing in PBS, the slides were incubated with a biotin-conjugated rabbit-anti-mouse antibody (1:500 dilution, Dako) for 30 minutes, followed by subsequent washing with PBS. The slides were then either incubated with streptavidin–HRP complex (1:500 dilution, Dako) for CML staining, or with the ABC-kit (1:100 dilution, Vector Lab, Burlingame, CA) for NOX2 for 1 hour. After visualization with 3,3’ diaminobenzidine (DAB, Dako), the slides were stained with hematoxylin, dehydrated and covered.

Two cross-sections were examined per heart, one section approximately 2 mm above the tip of the apex and the other approximately 2 mm below the site where the LAD was ligated. Quantification of the immunohistochemical staining of CML was performed as follows: for the intensity scoring each CML-positive blood vessel was given a score of 1= weak positive; 2=moderately positive; or 3=strongly positive. Additionally, the surface area of the tissue was measured using QPRODIT [18]. To obtain the immunohistochemical (IH) score per mm2, first each intensity score (1, 2 and 3) was multiplied by the number of vessels positive for this score. These multiplication scores were added and divided by the tissue area resulting in an immunohistochemical score per mm2 [19]. NOX2-positive blood vessels were counted and related to the surface area of the analyzed tissue (measured using QPRODIT) [18].

CML depositions in the intramyocardial vasculature 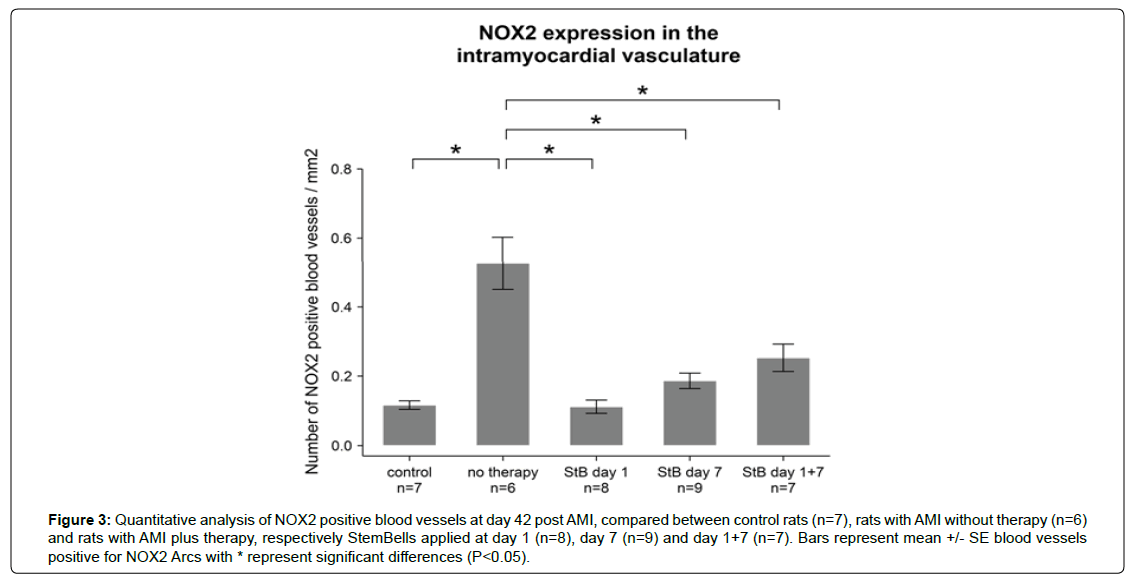 AMI can result in heart failure in which post-AMI inflammation is playing an important role [20,21]. In the present study we have found that AMI induced an increased accumulation of CML and of NOX2 in the intramyocardial vasculature. This increase was significantly decreased by StemBell (StB) therapy, irrespective of the time point of StB application.

Previously we have shown that microvascular CML levels were increased in the heart of rats on day 5 after AMI [18]. In the present study we observed increased levels of CML and NOX2 in the small intramyocardial blood vessels 42 days after the induction of AMI, indicating that this AMI-induced increase in CML is present for an extended time. Similarly, in patients who died from AMI, increased CML levels in the intramyocardial arteries were observed both in acute and chronic phase after AMI [18]. Moreover, as was found previously in the rat and patient study [18], the increased presence of CML, as well as NOX2, was not limited to the infarct area but was observed throughout the ventricles in the non-infarcted myocardium. In patients with diastolic heart failure CML levels were increased in the cardia microvasculature [22] and were associated with the clinical severity and outcome in heart failure patients [23,24]. Also, endothelial-specific overexpression of NOX2 was shown to induce hypertrophy, fibrosis in angiotensin II-treated mice leading to diastolic dysfunction [25]. Taken together, these observations may point to a role for microvascular CML and NOX2 in the chronic remodeling of the heart after AMI.

Mesenchymal Stem Cells secrete paracrine factors, which can reduce cell death, fibrosis and inflammation after AMI [26-28]. We now found that STBs decreased the AMI-induced pro-inflammatory status of the intramyocardial vasculature [18,29,30] as detected/ indicated by a decrease of CML and NOX2 positivity in the intramyocardial blood vessels. We analyzed heart tissue from a previous rat study in which we found that StB therapy improved cardiac function without having an effect on infarct size [15]. The finding that StB therapy did reduce both CML and NOX2 in the intramyocardial vasculature could indicate that the improvement of cardiac function by STB is due, at least partly, by a reduction of the pro-inflammatory status of the heart after AMI. Indeed, in a clinical study a correlation was found between elevated serum CML levels and the severity and mortality in heart failure, at least in diabetes [24]. Furthermore, it was shown that individuals with a high AGE serum levels have an 5-fold increased risk of post-infarction HF [31,32]. The observed reduction of NOX2 positive blood vessels by StBs therapy in theory could also explain its beneficial effect on heart function.

The long-term cardiac function improvement of StB administration in a rat AMI model was independent of the time point of StB administration [16]. Although it was suggested that application of stem cells at an early time point post AMI is less effective related to the detrimental cardiac inflammatory response [33,34]. We found however that even early application of StB therapy resulted in decreased NOX2 expression and CML immunohistochemical score. Indeed, Richardson [35] also demonstrated in a rat model of AMI that repeated bone marrow-derived MSC intervention in both the acute (immediately after AMI) and the sub-acute period (1 week after AMI) resulted in additional improvement of ventricular function beyond single dose, including an increase in arteriolar density in the infarct zone and remote segments.

In conclusion, we show that early StB application reduced CML and NOX2 positivity of the intra myocardial vasculature and as such might prevent heart failure development post MI.