Energy generation in most of the cases is associated with increased environmental pollution problems. Hence there has been a quest to innovate new alternatives of green energy sources/devices. In present scenario crude oil is most popular source of energy to run transport system for masses inspite of its inherent problem of environmental pollution on earth. Due to this widely prevalent severe environmental pollution is affecting human health very badly. It has necessitated to develop & adopt new energy alternatives to save environment. In present situation worldwide use of Electric vehicle, EV, in place of gasoline engines is being considered as promising future for mass transport because of depleting source of crude oil all over the world. However, EV technology is going to produce huge hazardous chemical and electronic waste by using Lithium-ion batteries etc. Therefore advent of such new technological solution for mass transport system shall bring another disastrous situation. Therefore a crucial time has come to invent new environment compatible green energy solutions. In this direction a revolutionary invention of Hydroelectric Cell is a promising green energy device with lot of advantages for mankind. Dr. Kotnala & Dr. Shah have created a groundbreaking invention of Hydroelectric Cell in the clean energy field. Hydroelectric Cell has got potential to replace Solar Cell & Fuel Cell. Unlike solar cell it works 24 h by simply sprinkling few drops of water on it. At room temperature Hydroelectric Cell dissociates water molecules to produce electricity without giving any external energy, light, acid/alkali to it. In fact no chemical except water is used for its working. Moreover no toxic, greenhouse gases like carbon dioxide etc. & hazardous chemicals are produced during Hydroelectric Cell functioning, thus it is environment friendly green energy source. Interestingly they have invented a new principle of water dissociation & a new device to generate electricity! Invention of cell is a wonderful combination of oxygen deficient ferrite characteristics, nanophysics and electrode chemistry based on underlying simple Physics principles. Hydroelectric cell invention has initiated a paradigm shift in green energy research and opened a new field of research globally. It supports carbon sequestration mechanism to mitigate environmental pollution also. Hydroelectric cell invention is a boon for masses & certainly it is an onset of a green energy revolution! Its news has been covered widely at national & international level.

Countries worldwide are in constant pursuit of greener and cleaner technologies to generate power from the limited set of sources available in nature. Power generation from renewable energy sources has reached parity with that from conventional forms. Countries like China and Germany are at the forefront of the renewable energy revolution while India and other countries are aggressively chasing its targets. However, the portability of energy derived from cleaner sources has been an open challenge. Conventional batteries use elements such as lithium-ion and lead-acid, which are toxic and have got a serious risk of explosion and cost-intensive. In addition, the disposal of such batteries is often questionable and harmful to the environment [1-4].

The quest for alternate sources of energy, preferably pollution free route adoption is still a big challenge. Under the Clean Energy Ministerial (CEM, 2017) development of electric vehicle globally has been accelerated. There have been a lot of efforts to develop new energy sources like biomass, solar, wind, ocean, fuel cell, etc. Harnessing solar energy would yield a never ending energy supply but the difficulty associated with it is to convert solar energy in an efficient and cost effective way. During the last 13 years enormous work is being pursued for silicon solar cell, perovskite solar cell, organic solar cell, thermo electric materials, hydrogen for converting into electrical energy as fuel cell [5-11]. Thousands of research papers and reports are being published each year on this subject all over the world. Despite of the fact that solar cell cost is still high with a limited hours of sunshine in a day, which varies remarkably with geographically location of earth. Opportunities exist for technologies that promise either significantly higher energy conversion efficiencies or significantly lower processing costs.

The potential role of hydrogen in the energy economy of the future is an optimistic view. However its usage demands an elaborate set up due to its stringent safety protocols, dangerous explosive possibilities and high input cost of pure hydrogen which imposes a big constraints on hydrogen liberal usage as energy source for domestic applications. Most attractive option of hydrogen energy usage is fuel cell [12,13]. Another associated serious problem of hydrogen storage and safe delivery is a road block to mass commercialization of fuel cell for automotive and stationary applications. Hydrogen storage and delivery on a mass scale is a long term issue with certain reservations even today after 60 years of its first use. While at present universally accepted fact that, the future switching to a “hydrogen economy” will be extremely costly and will take decades to compete. In dry cell modified form of laclanche cell the negative electrode is made of an amalgam of zinc, mercury and cadmium to prolong the life and to produce steady state current of the cell. It also reduces the rate at which zinc dissolves in cell liquid. Dry cell turns chemical energy into electrical energy with an efficiency of about 90%. In fact it is the most efficient way but expensive method of producing electricity and used chemicals, therefore not eco-friendly after its disposal. Ammonium chloride, MnO2 used in dry cell are poisonous [14,15].

Alternative water based pollution free electrical energy source have been researched extensively using highly sophisticated expensive techniques but a little success has been achieved in this direction. A highly sophisticated technique using jumping water droplet from super hydrophobic surface to hydrophilic surface has been used to generate picowatt power generation [16]. Cement matrix along with water has also been explored as a battery using different combination of electrodes [17]. Cement electrolyte mould of 7 × 7 × 4 cm3 dimension has been investigated to generate a very low current 0.1 mA by using water [18]. Graphene oxide based battery of 0.1 cm2 area at 70 %RH (relative humidity) has been demonstrated to produce maximum 2 μW power that too in presence of electrolyte [19].

Material engineering has made possible the development of new composites/materials for advanced water splitting technologies. Metal oxides, sulphides, nitrides and phosphates represent a well known cluster of water splitting photo catalysts [21-24]. The mechanism involved the photon absorption by material, which generates electron-hole pairs in abundance. These charge carriers then drifted towards the surface active sites of the catalysts. Finally, the photo-generated electrons reduce water to form hydrogen, and the holes oxidize water molecules to give oxygen.

Dr. R K Kotnala and his research partner Dr. Jyoti Shah, at the National Physical Laboratory, Delhi, have invented a device that can generate electrical power using only a few drops of water at room temperature without the help of any external power or chemicals [1-4]. The device, called Hydroelectric Cell (HEC), is able to generate about a quarter ampere current at less than 1 V, which is sufficient to power a small plastic fan. Dr. Kotnala has used nanoporous magnesium ferrite to split the water molecules into hydronium and hydroxide ions spontaneously. Silver and zinc electrodes act as anode and cathode to create a cell that produces electricity. Since magnesium has a high affinity for the hydroxide ion, it acts as the dissociating agent, thus breaking the water molecule into its two components. The hydronium ions are trapped inside the nanopores of the magnesium ferrite cell to generate an electric field through which the current is produced.

A hydroelectric cell of 2 inch diameter generates 110 mA of current and 0.95 V. When four cells of this dimension are connected in series, the voltage generated can be increased to 3.7 V, enough to power an LED bulb of 0.5 W. A representative diagram of hydroelectric cell has been shown in Figure 1. The Hydroelectric cell as a primary source of energy may be used for different low power requirements in the present form. The scientists innovated to develop hydroelectric cell for 14 years, of which 12 years were spent on developing the cell material. A breakthrough technology of generating electricity by dissociating water at room temperature, the scientists expects it to be one of the most significant inventions since the creation of lithiumion batteries in 1980. 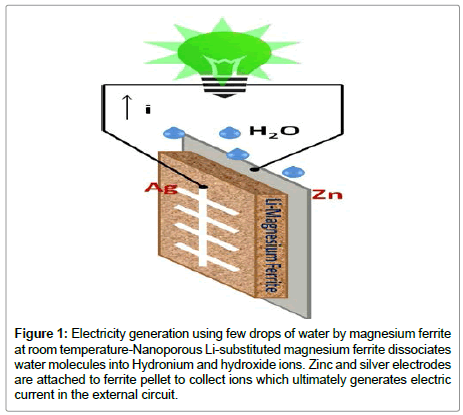 The invented HEC working on water molecule dissociation at room temperature without any external energy supply is a significant advancement in the development of green energy source to open a new research area. According to the investigations monovalent lithium substitution at divalent magnesium site preferentially occupies octahedral site which creates more defects in octahedral lattice. The most defective octahedral lattice fringes (111) exposes on the ferrite surface has been confirmed by high resolution transmission microscopy. Moreover presence of hydronium ion charge at room temperature due to water molecule dissociation on the surface of lithium substituted magnesium ferrite has been confirmed directly by electrostatic force microscopy and from ionic diffusion measurements obtained by Nyquist plot [1]. The coordinated defects on surface and inside nanopores generated enough potential for chemidissociation of water molecule at room temperature. Dissociated hydroxyl and hydronium ions get attracted towards the zinc and silver electrodes by capillary and surface diffusion process. Hydroxyl ions get reduced at zinc electrode and two electrons are released. These electrons move toward silver electrode through external circuit and oxidation of hydronium ions at silver electrode liberates hydrogen gas shown in schematic diagram of hydroelectric cell working mechanism in Figure 2. Presently existing lithium ion batteries needs development of anode-protecting materials to maintain reaction rates. Also non-flammable electrolytes that are stable at high voltage and can tolerate temperature above 55°C. HEC working does not require any electrolyte which makes it more environmentally safe. A nominal amount of water is needed for its operation thus it can also be run even in high humidity coastal regions.

Minimum weight, size and low cost are prerequisite for energy production system. Nevertheless current situation warrants innovative way of breakthrough in this direction. This has been already achieved in hydroelectric cell. It has got a very high potential to establish itself a robust candidate for commercialization. However proving HEC basic working mechanism there is a big scope for its design development to yield more energy output delivery for longer times. Hydroelectric cell indeed a facile, clean and cost effective method to obtain high crystalline ZnO nanoparticles byproduct without applying external energy [25]. Hydroelectric cell is a novel environment friendly hydrogen producing technique and it has been already reported [26]. It is one of the unique non-polluting H2 gas generation methods compared to photo-biosynthesis, photo-electrocatalysis and thermo-chemical methods etc. High purity hydrogen gas is produced by applying external voltage on hydroelectric cell.

The use of HEC for domestic electrical energy needs and as an automotive power source would be a key factor in terms of economy, safety and easy usage to replace hydrogen energy based fuel cell, storage batteries. The energy produced by HEC can be utilized in domestic residential applications in decentralized mode at low cost because conventional usage of electrical energy is associated with huge expense of electrical transmission and distribution. It can also supply the electrical needs of the household and in automotive engine as a clean energy source. Production and usage of such cells is not capital intensive unlike electrical power generation systems.

Technological improvements could make invented cell as an electrical energy source imbibed with an economic reality in bigger scale. It can also supply the electrical needs of the household and in automotive engine as a clean energy source. Although a considerable amount of research is required to generate HEC cell panels and their maintenance for large scale usage in the form of a power station. The future of power generation will certainly include hydroelectric cell systems.