Conclusion: Results of this study suggested strong association between KC and high cylinder (– 4.0) or more in autorefractometer reading & CVA less than normal

and KC in fellow eye according to p value and sensitivity & specificity but there is no relation to VKC. Keratoconus was more related to rubbing eyes, Hx of wearing glasses and family history of refractive errors. Screening of KC with corneal topography allows early detection and management.

in general population [1,2]. It is characterized by central and para- central corneal stromal thinning and subsequent conical ectasia. This conical distortion of the cornea results in irregular astigmatism with associated reduction in visual performance. It typically presents in adolescence and progresses in a variable manner.

Worldwide, it occurs in all ethnic groups, with males and females affected equally. Keratoconus is typically bilateral, but asymmetric with the worse eye continuing to have a poorer prognosis as the condition progresses [1]. The occurrence of keratoconus is usually an isolated condition, but it has been reported to occur with increased frequency in a number of ocular and systemic disorders. Ocular associations include VKC [1,3], retinitis pigmentosa, blue sclera, aniridia, ectopia lentis and Leber’s congenital amaurosis. Systemic associations include atopy, magnesium deficiency, Down’s syndrome, Turner syndrome, connective tissue disorders (such as Marfan’s, Ehlers-Danlos, osteogenesis imperfecta and pseuodoxanthoma elasticum), mitral valve prolapse, Laurence-Moon-Biedl syndrome, Rieger’s syndrome and neurofibromatosis. It has been particularly linked to various forms of ocular trauma such as hard contact lens wears, allergic eye disease and especially eye rubbing [1,2]. An inverse relationship between severity of the condition and diabetes has been reported [4].

A genetic predisposition to keratoconus has been observed [5,6] with the disease reported with increased incidence in some family groups [7] and reports of concordance in identical twins. Despite extensive laboratory and clinical research, the etiology of keratoconus is poorly understood. It is thought to include biochemical, physical and genetic factors; however, no single proposed theory explains the various clinical features. It is, therefore, likely that the development of keratoconus is the final common pathway for several different disorders.

• Myopic children not corrected to

• History of frequent change of glasses.

This study is a community based cross sectional analytical study conducted among the student of the basic school in 1st, 4th and 7th classes in Aljaded Althawra –Alkamleen locality– Aljazeera state – between November 2014 – April 2015

A total of 400 student were studied. This sample size of the study group was calculated uses this equation

Data were statistically analyzed using the Statistical Package for the Social Sciences;

(SPSS) for windows, version 21. Results obtained were presented in tables and figures. Sensitivity and specificity of each criteria were obtain (Table 1).

Table 1: Sensitivity and specificity of each criteria were obtain.

*Low sensitivity, high specificity: Positive test means the disease is likely. A negative test is not very helpful, because sensitivity is low

*High sensitivity, low specificity: Negative test means the disease is not likely. A positive test is not very helpful, because sensitivity is low.

is used in this study. Ethical approval was obtained from locality of state, research and Ethics committee of SMSB, and Makkah eye hospital – Sudan. 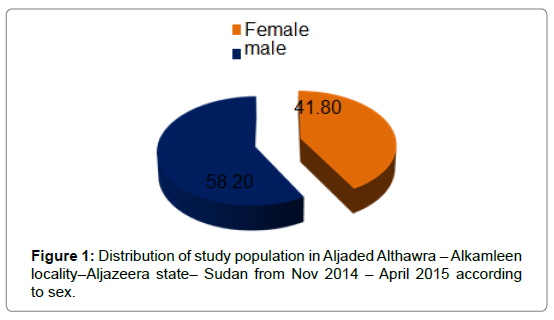 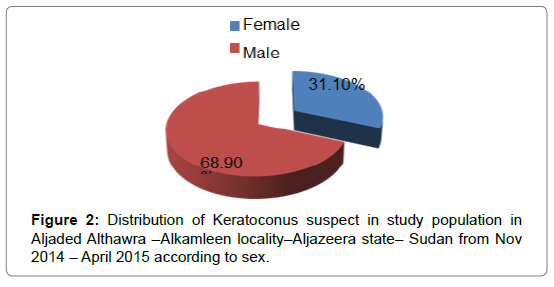 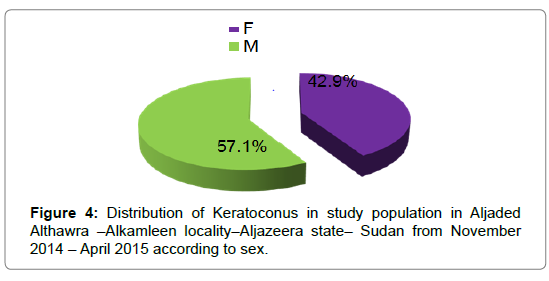 Figure 4: Distribution of Keratoconus in study population in Aljaded Althawra –Alkamleen locality–Aljazeera state– Sudan from November 2014 – April 2015 according to sex. 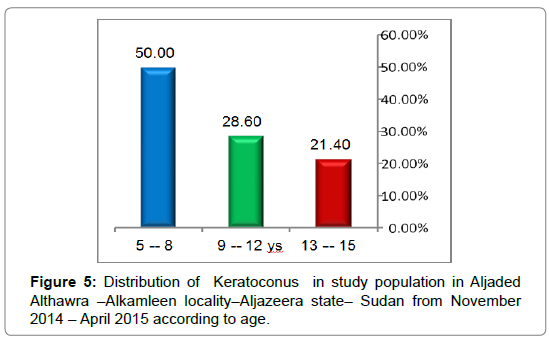 Figure 5: Distribution of Keratoconus in study population in Aljaded Althawra –Alkamleen locality–Aljazeera state– Sudan from November 2014 – April 2015 according to age.

Keratoconus has well-described clinical signs, but early forms of the disease may go undetected unless the anterior corneal topography is studied. Early disease is now best detected with video keratography. With the advent of computer-assisted corneal topographic analysis, the challenge has been to reliably quantify the minimal topographic criteria necessary for the diagnosis of keratoconus hat clinicians can use universally and reproducibly. This has become particularly relevant for ruling out early keratoconus when screening was done.

Aljaded althawra is located in the revolution north of the island with the boarder with the state of Khartoum and the region is home to a host of different Sudanese tribes. In this community based cross sectional analytical study, 400 students were examined whom were randomly selected of population in targeted age group. We found that 45 had keratoconus suspect criteria, 68.9% were males & 31.1% were females (Figure 2).

There are many risk factors associated with keratoconus. In this study one of the risk factors is rubbing eyes which were found in 32(71.1). Seven (21.9%) of them had positive topographic KCP (Table 2). Compare to 24.4% in a study from India by Agrawal et al., evaluated 274 patients of KC and revealed a higher prevalence of allergy in these patients [8]. Other risk factors were contact lens wearing but, in this study, no one had 0(0.0%) (Table 2). Also, there was 14(31.1%) had history of wearing glasses. Fourteen (31.1%) had family history of wearing glasses. Five (35.7%) & 4(28.5%) of them had positive topographic KCP respectively (Table 2).

About the fourth criteria which characterize by high cylinder (- 4.0) or more in auto refractometer reading. We found 8 eyes (8.9%) had this criteria, 6 eyes (75%) of them had positive topographic KCP (Table 5). This result show strong relationship between this criteria and KC (p value =0.00) which raises the possibility to get KC. Regarding family history which is one of the criteria. In this study no one had this criteria 0 eyes (0.00%). Compare to The US Collaborative longitudinal Evaluation of Keratoconus study reported a rate of 13.5% and study from occupied Palestine where the prevalence is higher, it was 21.7%. About the last criteria which are frequent change of glasses. In this study no one had this criterion 0 eyes (0.00%).

This study shows keratoconus among children between 5 -15 years old. In Aljded Althawra is 15.5%. In this study KC show greater prevalence in males than females and peak age 5 -8 years. The risk factors associated with KC in the study include, rubbing eyes, history of wearing glasses and family history of wearing glasses. This study shows strong relationship between keratoconus and high cylinder (-4.0 or more) in auto refractometer reading, CVA less than normal

This research is a primary study with limited fund so we recommend further wide community-based studies in this population & in screening of keratoconus. As keratoconus is a treatable disease so we advise initiating national program for early detection and treatment to prevent complications and blindness and to encourage Ministry of education and health to introduce screening program of keratoconus as primary eye care in schools which done annually. Also, to provide corneal topography machine to all eye hospitals and to be included in National Health Insurance. We recommend to increase awareness among citizens about the importance of early detection of the disease.