Luxation of the First Costovertebral Joint after Trauma of the Thorax

Thoracic trauma is common and may vary from simple contusions to lethal injuries. Uncommon thoracic injury is a costovertebral luxation of the first rib. Up till now only one other case report has been written in 1980. Therefore a case with this injury is presented.

A 38 year old male was presented to the Emergency Department after a prolonged suppression of the thorax. On arrival at the scene the patient was hemodynamically stable with a maximal Glasgow Coma Scale, but was intubated due to severe pain and a clinical flail chest [1].

Initially at the Emergency Department the patient remained hemodynamically stable. During secondary survey blood pressure decreased but patient proved to be a responder. Furthermore right sided radial and brachial artery pulsations were absent on palpation and with Doppler test.

In acute setting a stent was placed using a rendez-vous procedure in the subclavian artery resulting in good peripheral vascularization. After this procedure patient was admitted to the intensive care unit (ICU).

Some of the fractures were treated operatively during ICU admission. After cessation of sedation, patient proved injury of the brachial plexus on the right side due to either primary pressure during in the injury or secondary to the fractured clavicular bone.

The costovertebral luxation of the first rib was treated nonoperatively because there were no radiological signs of compression of the brachial plexus or approximate vessels (Figure 1). 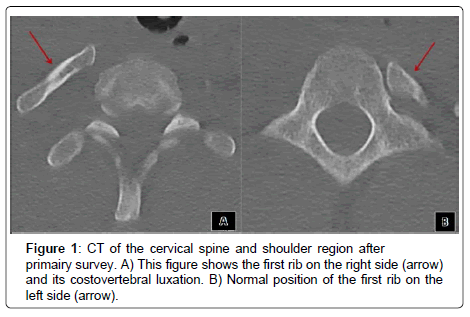 At last follow-up; 13 months after trauma, discomfort in his neck remained constant, increasing with movement of the neck. Abduction of the right thumb and index finger remained diminished.

No residual respiratory complaints are indicated by the patient. Function of the neck during physical examination the cervical spine showed a neutral alignment (Figure 2). Lateroflexion to the right measured 10°, compared with 25° to the left (Figure 3). Rotation to the right measured 40° and to the left 75 (Figure 4); Ventral and dorsal flexion of the neck showed no limitations. 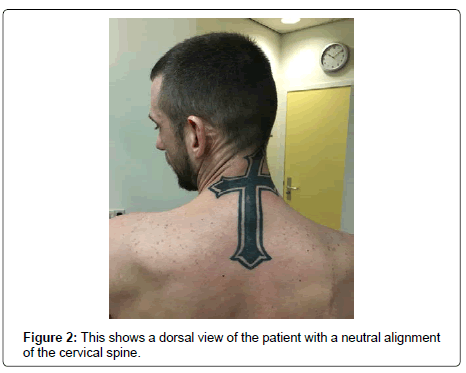 Figure 2: This shows a dorsal view of the patient with a neutral alignment of the cervical spine. A CT-san of the neck during follow-up showed no changes in the luxated position of the first rib (Figure 5). 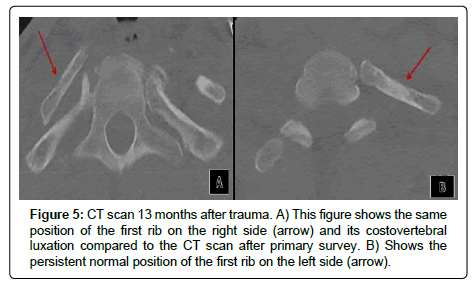 In this case report, a posttraumatic costovertebral luxation of the first rib on the right side was presented. Nonoperative treatment showed remaining discomfort.

Chest wall movements are enabled by joints between ribs and spine. These joints consist of two parts, the costocentral joint (articulatio capitis costae) and the costotransverse joint (articulatio costotransversaria). The costocentral joint is an arthrodial joint connecting the caput of the rib to the lateral part of the corpus vertebrae. In all ribs, except for the first, there is a juncture of the ribs and two adjacent vertebrae. The first rib articulates with only one vertebra [2].

Despite the ligamentous stabilization, these joints are flexible but expansive force, could lead to fractures, luxation, and dislocation. Rib fractures within the spinal joints are seen in more than 10% of trauma patients suggesting, the fact that costovertebral luxations are less common, the strength of the joint stabilizing ligaments [2,5].

Another complication due to first rib luxation might be compression of vascular structures. Compression can be present on the subclavian or carotic arteries or its side branches. No literature is available on this subject. Compression of the subclavian vene might, theoretically, result in obstructed venous return and consequently thrombosis of the upper extremity. Depending on symptoms, in presence of vascular compression, a decompressive intervention should be considered. In this case no signs of arterial or venous compression were found clinically or on the CT-scan, justifying nonoperative treatment.

The presented patient showed discomfort and loss of motion of the neck, most likely due to the costovertabral luxation of the first rib. Many other injuries were found in this area, but the consolidated ribs and clavicular bone suggest that their influence on neck function is limited.

Only one study was found in literature concerning first costovertebral luxations [1]. Three cases with various traumas were presented. This study focused mostly on the mechanism of injury and treatment was not further specified, as is outcome. This indicates the need for future publishing cases and experience on this subject, to increase knowledge on costovertebral luxations of the first rib.

A luxation of the first costovertebral joint on the right side, treated nonoperatively was presented. This seems justifiable in absence of neurovascular compression. Long-term complaints of discomfort and limited loss of motion of the neck might be the result. 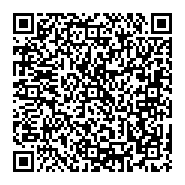