Yongqiang Chen1 and Spencer B Gibson1,2*

Cancer is a devastating deadly disease causing millions of death worldwide. Chemo- and radio- therapies have been used to kill cancer cells. Unfortunately, cancer cells frequently develop resistance to these treatments. Many pro-cell survival proteins have been shown to contribute to rapid proliferation and treatment resistance of cancer cells, among which the myeloid cell leukemia 1 (Mcl-1) has received intensive attention in recent years. Mcl-1 is an important anti-apoptotic protein belonging to the B-cell lymphoma 2 (Bcl-2) family that includes anti-apoptotic members such as Bcl-2, Bcl-xL, Bcl-w and Mcl-1, and pro-apoptotic members such as Bax, Bak, Bim, Bid and BNIP3 [1]. The expression of Mcl-1 can be transcriptionally regulated by many signal transduction pathways such as MEK/ERK, p38 MAPK, PI3K/AKT, JAK/STAT, and MAPK/Elk-1 [2,3]. Mcl-1 can also be modified post-transcriptionally by alternative splicing and phosphorylation. The alternative splicing of Mcl-1 gene generates three splice variants including the full length Mcl-1, Mcl-1 short (Mcl-1S) which only has a BH3 domain, and Mcl-1extra short (Mcl-1ES) which results from the first exon splicing and losses the PEST motif [3-8] (Figure 1). Different from the full length anti-apoptotic Mcl-1, Mcl-1S and Mcl-1ES play a pro-apoptotic role [4,5,7,9]. The phosphorylation of Mcl-1 might have different outcomes. Mcl-1 phosphorylation by TPK-induced ERK activation was observed in viable cells whereas the taxol- or okadaic acid -induced Mcl-1 phosphorylation was found in dying cells [3]. Mcl-1 plays an important role in various types of cancer. It protects cancer cells from death although its overexpression does not increase cell proliferation [10]. In this review, we discuss the recent progress made in studying the mechanistic role of MCL-1 in cancer cell death. The aim of cancer therapy is to selectively kill cancer cells making it essential to know how cancer cells die. There are three main types of cell death; apoptosis, necrosis and autophagic cell death. Apoptosis is a type of programmed cell death (Type I programmed cell death) characterized by cell shrinkage, plasma membrane blebbing, chromatin condensation, DNA fragmentation, formation of apoptotic bodies and caspase activation. Necrosis is an unregulated cell death caused by an accidental damage to cells by extracellular insults. Autophagic cell death is induced by prolonged or high level of autophagy in cells leading to irreversible digestion of cellular structures leading to death. Here, autophagy refers to macroautophagy which has being studied most extensively and is characterized by the formation of a doublemembraned structure autophagosome. Autophagosome fuses lysosome into autolysosome where intracellular materials are degraded.

In recent years, studies of cancers and other diseases has revealed other cell death pathways which include necroptosis, pyroptosis, entosis, mitotic catastrophe and ferroptosis. Necroptosis is a programmed form of necrosis which activation involves the kinase activity of RIP1 [11]. Pyroptosis is a type of caspase 1-dependent programmed cell death that is activated by inflammatory stimuli and featured by rapid rupture of plasma membrane [12]. Entosis refers to the death of one cell engulfed by another cell [13]. Mitotic catastrophe is a type of cell death induced by abnormal entry of cells into mitosis [14]. Ferroptosis is a type of cell death induced by the activity of oxidized form of iron (ferric iron) and subsequent generation of reactive oxygen species [15].

Mcl-1 has a high affinity of BH3 peptide-binding specificity for Bax, Bak, Bim, Bid, Puma and Noxa compared to other Bcl- 2 pro-survival family members indicating that cancer cells might use Mcl-1 as the most efficient guardian against stresses such as chemotherapeutic drugs [17]. This is supported by the finding that cancer cells over-express Mcl-1 to resist the treatment by ABT-737, a small molecule inhibitor antagonizing the three pro-survival proteins Bcl-2, Bcl-xL and Bcl-w [17,21,22].

Mcl-1 has a short half-life of less than 4 h [16]. Our recent studies demonstrated that when U87 cells were treated under hypoxia for a 72-h time course, Mcl-1 protein level increased up to 2 fold at 4 h, when cells did not die, and then dramatically decreased to about 10% at 72 h, when 40% of cells died [23]; in contrast, the levels of Bcl-xL [23] and Bcl-2 [24] did not change significantly over the 72-h time course. It is possible that other pro-survival Bcl-2 members such as Bcl-2, Bcl-xL and Bcl-w protect cells from death when Mcl-1 protein level dropped. 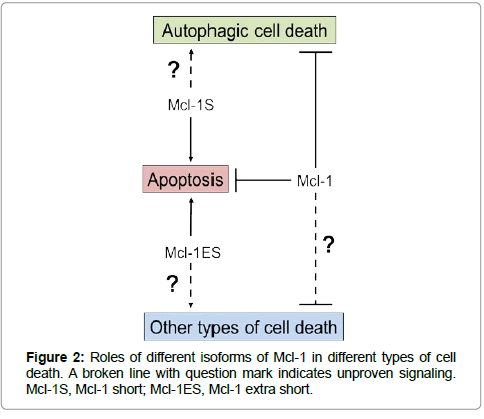 Necrosis occurs independent of Mcl-1. Interestingly, Bax and Bak mediated necroptosis led to reduction of Mcl-1 protein [33]. The role of Mcl-1 in other emerging types of cell death is unknown. Based upon its role in apoptosis and autophagy, it is reasonable to suggest the Mcl-1 will have similar pro-survival functions against these types of cell death. This is currently under active investigation.

The full length Mcl-1 protein has a role in anti-apoptosis and antiautophagic cell death. However, the Mcl-1 splice variants Mcl-1S and Mcl-1ES are pro-apoptotic (Figure 2). Mcl-1S plays its pro-apoptotic role by forming dimerization with and antagonizing Mcl-1 to effect downstream caspase [4]. Mcl-1ES induced mitochondrial apoptosis that is Mcl-1 dependent but independent of Bax and Bak [9]. This provides a counter balance to Mcl-1 expression in cells regulating cell death. The roles of Mcl-1S and Mcl-1ES in other types of cell death are still unknown.

Analysis of published datasets indicates that the mRNA level of Mcl-1 is upregulated in human glioblastoma tissues [23] compared to that in normal human brain tissues. This is consistent with the fact that Mcl-1 protein is over expressed in various types of cancers [10]. The reasons for this up regulation is multifaceted but generally are believed to be due to increased transcription through growth factor receptors. We and others have demonstrated that over-expression of epidermal growth factor receptor (EGFR) family members increased both mRNA and protein levels of Mcl-1. This upregulation is sufficient to protect cells from both death receptor and DNA damage induced apoptosis. Furthermore, the mRNA levels of Mcl-1 in various types of human tumor tissues are significantly higher than that of Bcl-2, Bcl-xL or Bcl-w when normalized to corresponding normal tissues (Table 1).

Table 1: The mRNA levels of Mcl-1, Bcl-2, Bcl-xL and Bcl-w in some types of human tumor tissues compared to that in corresponding normal tissues. Data were extracted from Oncomine database.

Most in vitro studies in the literature have been performed in atmospheric condition of greater than 20% oxygen. In contrast, the in vivo condition in different tissues of the human body is a hypoxic environment with various oxygen concentration ranging from 1.1% in the superficial region of skin to 9.5% in the kidney [34]. Furthermore, the oxygen concentration in solid tumors is much lower than that in the corresponding normal tissue [35]. Therefore, it is a vital topic to investigate the biology of cancer cells under hypoxia. It is well known that hypoxia can promote tumorigenesis. The hypoxiainducible factors (HIFs) can stimulate both cell survival and cell death pathways depending upon the context [36]. The mRNA and protein levels of Mcl-1 were reported to increase by hypoxia treatment in the human hepatoma cell line HepG2 [37]. Our recent study showed that the protein level of Mcl-1 was increased when glioma (U87) cells were treated under hypoxia (less than 1% of oxygen) for short time (4 h) [23]. Knockdown of Mcl-1 promoted cell death supporting that the upregulated Mcl-1 plays a pro-cell survival role. The upstream mechanism of Mcl-1 elevation in hypoxia can be attributed by the lipid raft protein caveolin-1 (CAV1) and epidermal growth factor receptor (EGFR) (Figure 3). Hypoxia induces the expression of hypoxia-inducible factor 2 alpha (HIF2α) leading to the upregulation of CAV1 and EGFR proteins [38,39]. CAV1 activates EGFR tyrosine kinase in a ligand-independent manner [39]. Then EGFR activation stimulates Mcl-1 expression possibly via the MAPK-Elk-1 signaling [2], protecting cells from hypoxia-induced cell death. 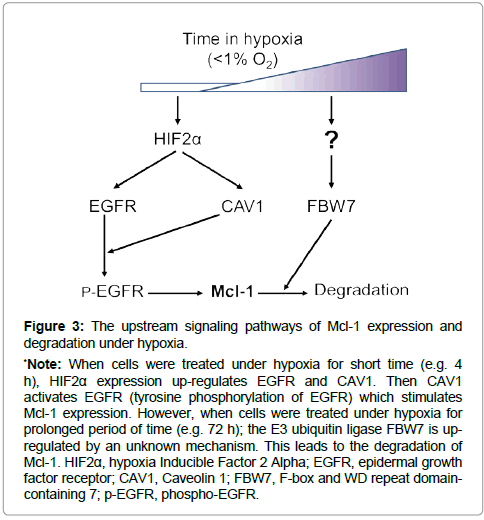 Figure 3: The upstream signaling pathways of Mcl-1 expression and degradation under hypoxia.

Since a pro-survival Bcl-2 family protein counteracts apoptosis by binding to the BH3 region of a pro-apoptotic protein such as Bax and Bak [16], BH3 mimetic anti-cancer drugs have being actively developed. For example, ABT-737 and its derivative ABT- 263 (Navitoclax) bind to Bcl-2, Bcl-xL and Bcl-w [16]. ABT-199 (Venetoclax), an engineered version of ABT-263, was more recently developed to selectively bind Bcl-2 [44].

Mcl-1 has been shown to contribute to tumorigenesis, metastasis, and resistance to traditional and targeted therapies [45-47]. Some effective drugs induce cell death in cancer cells by degrading Mcl- 1 [48-52]. Chemotherapeutic drugs are more effective in killing Mcl-1-dependent leukemia cells than in killing Bcl-2-dependent counterparts [48]. However, upregulation of Mcl-1 has been used by cancer cells to resist treatments such as by BCL-2/BCL-xL inhibitors [45]. In contrast, Mcl-1 splicing variants Mcl-1S and Mcl-1ES antagonize Mcl-1 to play a pro-apoptotic role in cancer cells. This provides rationale to develop drugs that inhibit Mcl-1 interactions allowing cancer cells dependent on Mcl-1 expression to die.

The current drug development of Mcl-1 small-molecule inhibitors are mainly focusing on targeting apoptotic cell death. Future drug development should also target the roles of Mcl-1 in other cell death pathways such as the interaction between Mcl-1 and Beclin 1 in an autophagic cell death, especially when cancer cells become resistant to apoptosis. In addition, effective drugs that target the degradation of Mcl-1, would also be effective at killing cancer cells [48-52]. E3 ubiquitin-ligases Noxa, MULE, β-TrCP, FBW7, Trim17 and CDC20 are involved in Mcl-1 degradation [23,40]. By understanding the relative roles of these enzymes in Mcl-1 degradation, novel drug targets could be developed. Indeed, development of drugs targeting the deubiquitinase of Mcl-1 such as USP9X show signs of being a promising strategy [10].

Mcl-1 plays a vital role in promoting cell survival and inhibiting chemotherapeutic drugs-induced cell death in cancer cells. Compared to other anti-apoptotic Bcl-2 family members such as Bcl-2, Bcl-xL and Bcl-w, Mcl-1 is more robustly up-regulated in various cancer tissues in related to corresponding normal tissues. Furthermore, Mcl- 1 is upregulated by hypoxic environment and in drug resistant cancer cells. On the other hand, some effective chemotherapeutic drugs or targeted therapies against Bcl-2 family members led to degradation of Mcl-1 or disruption of the interaction between Mcl-1 and an apoptotic effector. This suggests that Mcl-1 is a gate-keeper regulating cell death and survival through its expression level and interactions. Developing specific Mcl-1 inhibitors that disrupt Mcl-1 interactions, or induce its degradation, could be effective alone or in combination with chemotherapy or pro-survival Bcl-2 family member inhibitors in overcoming drug resistance in cancer.