M. auratus is a common companion and laboratory animal in many countries around the world. Many guidelines recommend housing M. auratus in enriched enclosures that are as large as possible with a bedding depth of approximately 2.5 cm. However, given that wild M. auratus will build intricate burrows it is uncertain whether M.auratus would actually prefer to nest in an enclosure that provides enrichment relative to an enclosure that provides a greater substrate depth to facilitate natural behaviours. We provided a female M.auratus with an 8 m2 pen containing a 30L tub containing recycled paper bedding, an enriched 3-storey commercially available cage that included a running wheel and 2.5 cm of bedding in the bottom, and enrichment derived from a mixture of commercial products and recycled household products (RHPs; e.g. cardboard boxes). When randomly sampling the location of M. auratus during a 3-month study period, we found that virtually all nesting behaviour, including hoarding, sleeping, and burrow construction occurred within the tub. While approximately 31% of non-nesting behaviour centred around the cage, no nesting behaviour occurred there. Moreover, of the interactions with external enrichment in the pen, we found that over 90% of interactions were with RHPs rather than commercial products. We conclude that M. auratus is likely to prefer housing conditions that provide greater quantities of substrate in which they can emit their natural burrowing behaviours, that they value burrowing and nesting opportunities to a greater extent than even multi-level above-ground enriched areas, and those simple cardboard boxes may provide better enrichment than expensive commercial products.

M. auratus is a common companion animal in many parts of the world. Keeping small rodents is economical and well suited for dense urban environments because they can be kept indoors and require much less food and bedding compared to larger companion animals [1]. Guidelines from animal welfare groups recommend keeping M. auratus in housing that is as large as possible with 2.5 cm (1 inch) of bedding. In many respects, this is similar to laboratory guidelines that recommend keeping other rodent species, such as rats, in housing with relatively shallow bedding.

However, several studies have now shown that rodent species have not lost their burrowing instincts, despite decades of domestication [2,3]. The essential nature of burrowing behaviour means that it can also be used to detect the behavioural dysfunctions as a sign of potential illness [4,5]. Even though burrowing behaviour involves significant costs in terms of energy and time (tunnelling, digging, hoarding), M. auratus will persist in engaging in burrowing [6]. Housing conditions have been shown that it affects the health and sensitivity of M. auratus, for example, their sensitivity to mercury [7]. We therefore questioned the common advice that M. auratus should be kept in housing with relatively shallow bedding.

It is a well-established in other fields that examining the behaviour of an animal can provide insight into what the animal may ‘like’ in rats [8-10], so we adapted this by running a study of housing preference in an M. auratus specimen. Since environmental enrichment has been shown to be very important for M. auratus [11,12], we provided significant environmental enrichment in the pen apart from within housing enclosures that was derived from commercial products specially marketed for the enrichment of M. auratus or other small rodents and repurposed household products (RHPs). We hypothesised that M. auratus would prefer the deep bedding housing condition for nesting and we make a further serendipitous observation that the preferred external enrichment sources were RHPs rather than commercial products.

A female M. auratus specimen (‘the subject’) was obtained at approximately 8 weeks of age and was singly housed in accordance with the solitary nature of the species, with a 12 h: 12 h light/dark cycle. Housing was in a two-storey standard cage with ad libitum food and water (refreshed daily) and standard 2.5 cm bedding depth. The subject was given one month to habituate to new housing conditions. The subject was also handled daily and hand fed sunflower seeds and honey flavoured drops to habituate the specimen to experimenters.

Following habituation, the subject was given access to an 8m2 pen. As shown in Figure 1, the pen contained a 30L tub full of bedding and a 3-storey cage with a shallow (2.5cm) depth. External to the tub and cage, but within the pen, was external enrichment consisting of commercial products (ladders and hay tunnels) and repurposed household products (RHPs; consisting mainly of cardboard boxes). 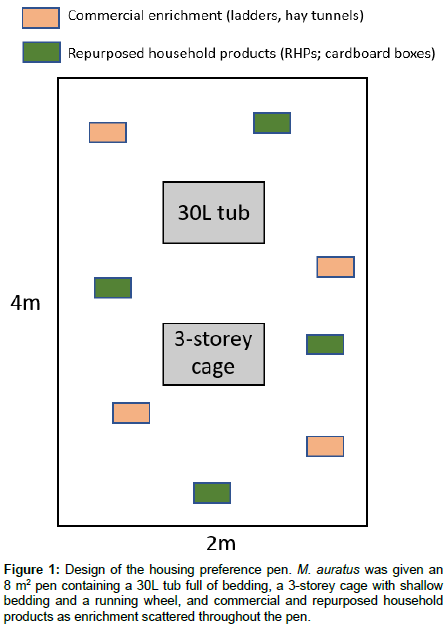 Figure 1: Design of the housing preference pen. M. auratus was given an 8 m2 pen containing a 30L tub full of bedding, a 3-storey cage with shallow bedding and a running wheel, and commercial and repurposed household products as enrichment scattered throughout the pen.

The subject was observed at least twice daily at a random time in the morning and afternoon, which was combined with husbandry activities (e.g. refilling food and water). Location was manually noted independently by at least two observers. Half an hour of observations were taken during each session and the following was recorded: time spent nesting in each of the tub and the cage, time spent interacting with enrichment objects, and time spent free-roaming throughout the pen.

As shown in Figure 2, the majority of the time was spent in nesting behaviour. Nesting behaviour is for the purposes of our study included sleeping, burrowing, hoarding, or eating in the housing. When outside of one of the housing options, the subject spent time mostly interacting with enrichment and a smaller percentage of the time free roaming throughout the pen without interacting with any objects. 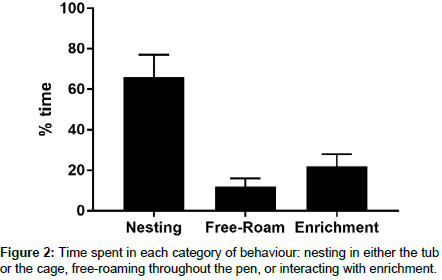 Figure 2: Time spent in each category of behaviour: nesting in either the tub or the cage, free-roaming throughout the pen, or interacting with enrichment.

Of the nesting time, there was a clear preference for nesting in the 30L tub vs the 3-storey cage, which was mostly unused (Figure 3). Furthermore, inspection of the 3-storey cage showed little to no signs of habitation, such as faeces, while the 30L tub contained the entirety of the subject’s food stash and, in a separate compartment, a substantial quantity of faeces (that was regularly cleaned as part of normal husbandry). 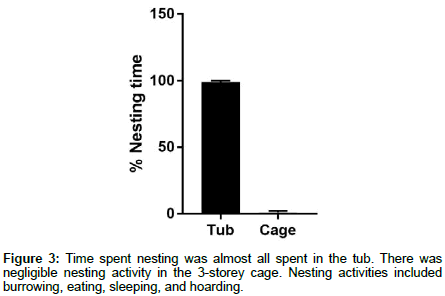 Figure 3: Time spent nesting was almost all spent in the tub. There was negligible nesting activity in the 3-storey cage. Nesting activities included burrowing, eating, sleeping, and hoarding.

A serendipitous finding was that the subject did not show a great preference for commercial enrichment products. Of the time spent interacting with enrichment, most of this time was spent interacting with RHPs (Figure 4). In particular, the subject seemed to develop a preference for a particular cardboard box, perhaps due to its size or proximity to food. 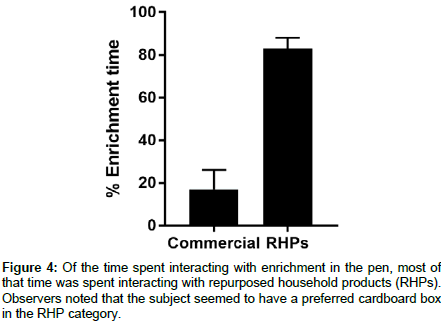 The present study has demonstrated that an M. auratus specimen showed a strong preference for nesting in a 30L tub over nesting in a 3-storey enriched housing solution. Moreover, the subject showed a strong preference for RHPs over than the commercial enrichment products, suggesting that simplicity rather than engineering is preferred by M. auratus.

Our findings are consistent with previous literature that has been shown the importance of housing and enrichment for M. auratus and other rodents [4,5,11,12]. In particular, despite countless generations of domestication, M. auratus, like other rodents, has retained a strong instinct and natural desire to burrow [2,3].

However, it was surprising that the subject spent relatively little time free-roaming in the enclosure. Members of M. auratus species have been reported to exhibit very high levels of spontaneous locomotor activity, however this is dependent on circadian rhythms [13-17]. We speculate that the relatively low levels of free-roaming may have been due to either the presence of observers, sampling that did not sufficiently cover a period of maximal activity that may have occurred at other times during the dark cycle, or the individual personality and preference of the subject.

Our study also provided a serendipitous observation, that the subject strongly preferred RHPs over commercial products. There is currently no existing literature on this topic, suggesting that our finding is a very novel one. We suspect that the subject preferred RHPS because they provided a safe environment in which to take stock and further investigate her environment or an outpost away from her nest that she could use to then search for food. As prey animals, M. auratus are likely to prefer safe environments over enrichment options that may appeal to humans, but not necessarily satisfy the safety and concealments needs of small rodents.

In conclusion, we have shown that M. auratus has a strong preference for a deep burrowing medium in their home-cage in which to build a nest. Despite countless generations of domestication, M. auratus has retained a strong desire to build intricate burrows and nest in a subterranean habitat. Finally, we observed that M. auratus has a preference for RHPs over commercial enrichment products, suggesting that those with responsibility for housing M. auratus in the laboratory or as companion animals should favour simple enrichment options over pricey commercial options.