Objective: Cervical spine injuries have been associated with work tasks requiring heavy arm and shoulder exertions. Current biomechanical models established to estimate compressive forces acting on the cervical spine do not include the contributions of the muscles surrounding the neck in supporting the shoulder and arm during these exertions. This paper presents a biomechanical analysis of compressive force as a result of single-hand lifting. Method: It was hypothesized that contraction of the three main shared muscles are the major producers of the cervical compression. To test this hypothesis, bilateral Electromyography data of major shared musculature (upper trapezius, sternocleidomastoid, and levator scapula) and posture data were collected from twenty subjects preforming lifting of five different weights from twenty different locations produced by the interaction of varying heights, reach distance, and angles simulating the work done by assembly line workers. All lifting tasks were done by the right hand. Analysis of the moment produced by these muscles forces and the head’s mass at the C4/C5 cervical spine intervertebral disc were performed to investigate moment balance. A coordinate system was set on segment at the C4-C5 disc center and the moment was calculated around two axes; the X, which divides the segment into front and back, and around Y, which divides the segment into right and left. Results: A t-test of the summation of moments around each axis was performed and results showed that the moment was balanced. Conclusion: A balance in moment indicates that the shared muscles considered are the major producers of cervical compression during single hand lifting. These findings also demonstrate that any attempt to develop a biomechanical modeling to estimate the cervical compression must include the contribution of hand lifting activities

Current biomechanical estimation of the cervical spine compression does not account for arm work contribution. The existing biomechanical models of the cervical spine have adopted a cutting-plane approach and have only dealt with muscle forces generated in response to external neck moments [1-3]. The existence of an external moment on worker’s head while performing hand work activities, like work in assembly lines, appears to be not realistic; therefore, compressive forces acting on the cervical spine could only be the result of the shared muscles contracting to support the shoulder during hand activities and the mass of the head. Our previous work has demonstrated that the main shared musculature the upper trapezius, sternocleidomastoid, and levator scapula muscles on both sides of the neck were active during single hand lifting activities and the muscle activities are scientifically affected by work layout factors [4]. This paper presents a test hypothesis that most of the forces on cervical spine are generated by the contraction of the major shared muscles between the neck and the shoulder and the mass of the head. If true, future attempts to estimate the compression of the cervical spine must account for hand lifting activities. This paper utilizes data and findings presented in our previous paper summarized in the method section [4].

Neck region is a common site of work-related musculoskeletal injuries and disorders [5]. The frequent sites of neck injury are C5 level (74%), C4 level (16%), and C6 level (10%) [6]. The use of upper extremities in working activities has been linked to neck musculoskeletal injuries. In work related activities neck pain has been reported to be as high as 37% for food packers, 31% for cash register operators, 27% for office workers and 63% for welders [7-9]. It was concluded from epidemiologic studies that there is an ‘evidence’ connecting forceful exertion of the arm and the occurrence of musculoskeletal injuries in the neck [5,10]. Hand lifting is one of the causes of the cervical-disc complex disorders [11]. A variety of occupations and/or work activities have been studied experimentally to understand the factors associated with neck musculoskeletal disorders. Surface EMG (EMGs) of the neck muscles is often used to understand the mechanism of neck MSD. Lannersten and Harms Ringdahl, for example, studied the effect different cash registers had on the EMGs activity levels of the infraspinatus, trapezius, and erector spinae muscles for cash register operators [12]. Based on the pattern of EMG activities of the muscles studied, the authors concluded that keyboard and pen reader registers generated lower EMGs values than scanners in which the cashier needs to lift the product and scan it. In a similar study, Takala and Viikari-Juntura found that reducing the height of the service counter by 25 cm reduces the EMG amplitudes for the right upper trapezius of female bank cashiers [13]. Dennerlein and Johnson studied the effect of different positions of computer mouse within computer workstations to evaluate biomechanical risk factors across different mouse positions [14]. The high mouse position resulted in the highest level of muscle activity. Anton, Rosecrance, Gerr, Merlino, and Cook studied construction workers in a laboratory setting to evaluate the effect of two different types of concrete blocks [15]. Their results showed that the activity in the upper trapezius muscle was not affected by the block weight, but increased as the height of the wall increased. Lindberg, Frisk-Kempe, Linderhed, and Eklund studied upper trapezius muscle activities for manual vs. automated fabric-seaming tasks [16]. Analysis EMG amplitude revealed a higher risk of MSD for the manual seaming than the automated seaming tasks. In a similar study, Pitts, Aghazadeh, and Harvey evaluated ten dentists using EMG [17]. He found that EMG of the upper trapezius muscle revealed signs of fatigue at the end of 8 hours shift. Nimbarte also measured EMG in the sternocleidomastoid and the upper trapezius muscles during several different types of two handed lifting tasks under 25%, 50%, and 75% exertion of their maximum strength [18]. It was found that EMG magnitude of the upper trapezius as % MVC is higher than the % MVC observed in the sternocleidomastoid. The author concluded that both load lifted and the vertical position significantly affect the activation of these muscles with female contract their sternocleidomastoid harder. With such evidence of active shared muscles during hand-lifting activities, current biomechanical estimation of the cervical spine compression does not account for arm work contribution. The existing biomechanical models have only dealt with muscle forces generated in response to external neck moments [1-3]. The existence of an external moment on worker’s head while performing hand work activities, like work in assembly lines, appears to be not realistic; therefore, compressive forces acting on the cervical spine could only be the result of the shared muscles contracting to support the shoulder during hand activities and the mass of the head.

Ten subjects, five males and five females, participated and gave their informed consent to the procedure, which was approved by the University of Nebraska-Lincoln Institutional Review Board. The mean height of the subjects was 170.8 (SD 6.01) cm, body weight 69.68 (SD 10.57) kg and age 29 (SD 4.96) years. All subjects were right handed and were screened for health history and were accepted only if they were without a history of back, neck, shoulder, arm, wrist, or hand pathology.

This study used a 5 × 2 × 2 × 5 design with the 5 weights, 2 heights, 2 reach distances, and 5 angles (distribution). Each subject lifted five different weights (1, 1.5, 2, 2.5, and 3) kg from 20 different locations at varies heights, reach distances, and angles. Subjects were asked to sit in a chair and adjust the chair height until their elbows were parallel to the table surface. A foot rest was provided when needed. These loads were randomly distributed on the table in front of the subject and they were lifted using just the right hand. The subjects were instructed to lift each weight slightly (about 2 inches) off the surface, maintain that for 2-3 seconds, and then place it back on the surface. Each subject performed a total of 100 trials in random order. As a result, each muscle of the six muscles studied had a total of 100 responses. While performing these lifting tasks, the EMGs and the posture data were recorded using the EMGs system and Motion capture system respectively. A rest period of one to two minutes was provided between each trial with additional time upon request. After all trials had been successfully performed, the series of maximum voluntary muscle contractions were repeated. More details of the experimental layout, equipment, and data processing can be found on our previous paper [3].

For each trial, EMG values were normalized based on a maximal voluntary contraction (MVC) for each of the six muscles in the study. A normalized EMG value was calculated as:

Where, EMGTask was the measured filtered and integrated EMG value for a particular experimental trial, and MVC was the highest value based on a series of MVC trials for each muscle. The MVC normalization procedures were conducted consistent with a previous work [2,12,14,16,18,19].

Three bilateral pairs of neck muscles were included in the moment analysis. The muscles originating or inserting at the shoulder level, crossing the C4-C5 level and running parallel to the cervical spine, were included in the model. The muscles that were included are; Right and Left Sternocleidomastoid. Right and Left Levator scapula. Right and Left upper trapezius. An origin of the coordinate system was set at the C4-C5 disc center, with the positive X axis along the right (lateral) direction, and the positive Y axis along the anterior direction, with the positive Z axis acting upward (Figure 1). Moment at C4-C5 level created by six shared muscles is calculated using muscle forces, acquired by NEMG-Force relation, their line of action and anatomical characteristics. The information of muscle locations, line of action, and area are adapted from Moroney, S.P and presented in Table 1 [2]. Using the muscle forces of the shared muscles and their anatomical location and orientation, the moment was calculated around the X-axis, which divides the segment into front and back, and around Y-axis, which divides the segment into right and left. In addition, the moment analysis was done such that it was portioned into moment produced by the right-side muscles, the left side muscles, the front side muscles, and the back side muscles of the segment taken at the C4/C5 level (Figure 1). Moments around both axes were produced by vertical component (Z-component) and the head’s mass. Balance of moments created on each axes (Y-Axis and X-Axis) in both directions (counter clockwise and clockwise) and the head’s mass was tested. Posture data was used to determine the direction of the moment created by the head’s mass for each lift. A t-test with an (α = 0.05) was used to determine if there would be a statistical difference in the moments, in opposing directions, on each axis. 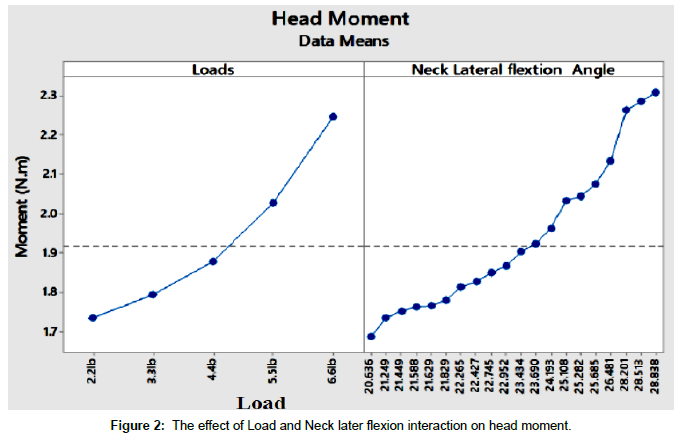 Figure 2: The effect of Load and Neck later flexion interaction on head moment.

While results of this experiment show significant muscular activity associated with the single-handed lifting, it should be realized that the subjects participating in this experiment were university students, and differences may be found if experienced workers were used. This limitation has the potential to influence the external validity and occupational applicability of this research. Additionally, muscle information used for calculation was adapted from the literature which might slightly differ from the actual muscle information if measured by muscle imaging systems. The dynamic task considered for this experiment was simplified to a single (static) point in time at the initiation of the lift. Analysis of the complete trajectory or consideration of different discrete points in the lift may have resulted in other conclusions. It is difficult to generalize these results to a dynamic task or for a repetitive lifting task. Additionally, our aim was to examine the hypothesis that main shared musculature is the major producer of the cervical compression and only three pairs were included. Other shared muscles might be active during hand lifting activities. Our analysis and results could further be used to build a comprehensive biomechanical model that is capable of taking into account the forces generated on the cervical spine as a result of hand usage.