Neurofibromatosis type 2 (NF2) is a rare tumorigenic disorder with manifestations from childhood. Recognition of early childhood signs could prompt earlier diagnosis of NF2, improving management. We present two case reports of children with NF2; both with cortical dysplasia and one with additional with retinal folds. The cases demonstrate corticaland retinal dysplasia as early manifestations and emerging signs of NF2. We suggest that they are considered as additional minor diagnostic criteria for NF2.

Although the tumours in NF2 are usually non-malignant, they can cause significant morbidity [2] and decreased life expectancy [2,3] The cardinal presenting features of NF2 in adulthood are hearing loss and vertigo [3], secondary to the development of vestibular schwannomas, whereas in the paediatric age group, the presenting signs of NF2 are variable and can include visual loss, strabismus, seizures, facial palsy, and weakness [3]. Despite many of the early signs, the mean age of diagnosis overall was 11.6 years in a recent study [3]. Congenital eye anomalies have previously been highlighted as presenting features of NF2. In one study [4], the most common eye features in NF2 patients were posterior subcapsular or capsular, cortical, or mixed lens opacities and retinal hamartomas. Other eye signs associated with NF2 include epiretinal membranes, combined hamartoma of the retina and retinal pigment epithelium, retinal hamartoma and optic nerve sheath meningioma. An awareness of eye signs could be beneficial to aid earlier diagnosis, especially in the wake of new therapeutic treatments for NF2 [5,6].

We present two cases with NF2 and cortical dysplasia. One individual additionally had a retinal fold and coarctation of the aorta. Informed written consent was obtained for both individuals.

A 12-year-old boy was born at 42 weeks’ gestation, following an unremarkable pregnancy, via emergency Caesarean section (due to placental abruption), weighing 3.48 Kg. He initially required resuscitation but made a rapid recovery on the special care baby unit. There was no relevant family history. He was diagnosed with coarctation of the aorta in infancy and this was repaired at the age of 2 years and 6 months. He was noted to have a squint at 6 weeks of age and was diagnosed with right amblyopia, nystagmus, and abnormal head posture at 8 months of age. Ophthalmology examination at this time revealed poor vision and a right-sided retinal fold (Figure 1), with electrodiagnostic tests demonstrating absent cone responses and severely reduced rod responses in the right eye, due to the retinal abnormality. He subsequently developed a left epiretinal membrane at the macula. He had some early developmental delay, but this resolved, and his cognitive and motor development was subsequently normal. He developed a series of febrile convulsions at the age of 2 years, which persisted until 5 years of age. At 11 years, he developed focal seizures affecting the right hand, which, over a period of 2 weeks, progressed to tonic-clonic seizures, then an episode of status epilepticus. Brain Magnetic Resonance Imaging (MRI) demonstrated frontal and parietal cortical dysplasia (images G and H), bilateral vestibular schwannomas and a posterior parafalcine meningioma. He was initially treated medically, but the seizures became difficult to control and he underwent removal of the left fronto-parietal dysplastic cortex, after which, the seizures resolved. Histology demonstrated the presence of meningioangiomatosis. He was diagnosed clinically with NF2 and molecular genetic analysis identified a de novo heterozygous frameshift deletion (c.161_162delTG, p.Leu54Arg) in the NF2 gene. 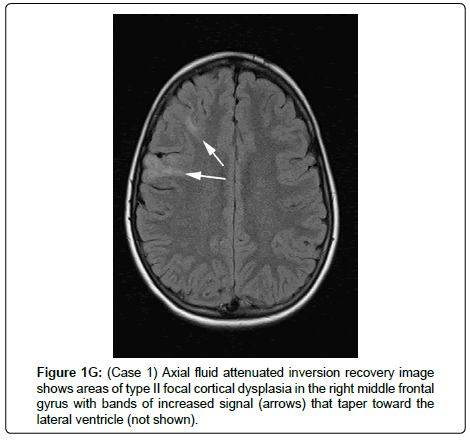 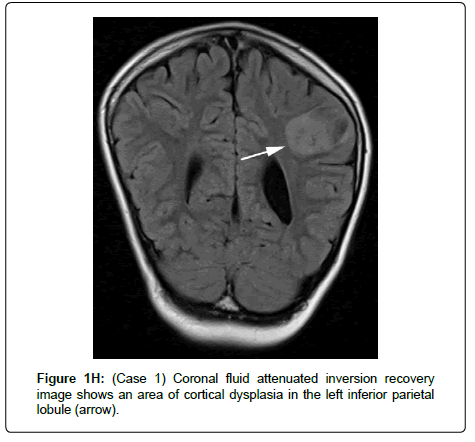 He received Bevacizumab to control his vestibular schwannomas and remains on treatment with this (Figure 1).

A 9 year old boy was born at term, weighing 2.44 Kg, following an uncomplicated pregnancy. There was no relevant family history. The neonatal period was unremarkable. He had pneumonia at age 5 weeks, followed a short time afterwards by a severe urinary tract infection, febrile convulsions at age 1 year, frequent tonsillitis with tonsillectomy at age 4 years and mild asthma.

A reduction in his vision was identified at a routine school vision assessment at 4 years. Eye examination revealed a left-sided cataract. At a subsequent examination, bilateral epiretinal membranes were diagnosed. At 7 years of age, his vision was 6/18 in the left eye and 6/6 in the right eye with no relative afferent pupillary defect and normal colour vision. The cataract was thought to explain the reduced vision in the left eye and was managed conservatively. At this time, the patient developed complex partial seizures affecting the left side of his face and left hand. These increased in severity over the course of a few weeks and he was treated with Carbamazepine. Brain MRI revealed cortical dysplasia, bilateral vestibular schwannomas, a small parafalcine meningioma and a cervico-medullary tumour. NF2 was diagnosed clinically and molecular genetic analysis identified a de novo heterozygous mutation (c.459C>G, p. Tyr153Ter) in the NF2 gene, predicted to lead to truncation of the protein.

His epilepsy is controlled medically. The cervico-medullary lesion became more prominent. On resection, it was a grade II Ependymoma. He has continued to undergo surveillance scans and no further treatment has been necessary during 45 months of follow up (Figure 2).

Figure 2: (Case 2) Near infra-red reflectance images and corresponding ocular coherence tomography macular scans from the left eye, showing flame-shaped retinal tufts (I): and in the right eye, at a later stage of disease, with the formation of epiretinal membrane with broad attachment to the vitreous (J).

We report two unrelated patients with NF2 and cortical dysplasia. Case 1 additionally had a retinal fold and coarctation of the aorta. To the best of the authors’ knowledge, there has only been only one other patient previously reported with NF2 retinal folds [8]. One further patient was reported to have a rosette on the retina [9], which is another type of retinal dysplasia. Both patients described here had other eye abnormalities, which were detected several years before the diagnosis of NF2 was made.

The association of cortical dysplasia and NF2 was first reported by a radiologist, Vargas et al. [10], who described the incidental finding unexplained areas of hyperintensity in 23 of 34 (67%) imaged individuals with NF2. 15/34 displayed lesions suggestive of cortical dysplasia in the subcortical white matter and a further 3/34 demonstrated a cerebellar lesion indicative of a neuronal migration anomaly: 2 displayed a ‘transmantle sign’ (i.e. a feature of focal cortical dysplasia) in the right cerebellum and one patient had a cleft within the left cerebellum, lined with cortical grey matter [10]. Recently, Anand et al. reported 32 cases with NF2; 7 of these cases had seizures and of these 7, 5 displayed cortical dysplasia [11]. 4 of the 7 patients with seizures also had significant eye signs before seizure presentation (3 out of the 4 had cataracts) [11]. One of Anand et al.’s NF2 patients also had coarctation of the aorta [11]. Our patient, case 1, is only the second reported case of coarctation with NF2. Interestingly, there are other reports of NF2 patients with structural arterial abnormalities; one patient with occlusive right renal artery stenosis [12], a patient with a narrowing of the left carotid artery and a patient with a tortuous left internal carotid artery [13].

Cortical dysplasia and retinal anomalies occur during fetal development and therefore constitute congenital signs, detectable on brain imaging or eye examination, respectively, in very early life. Early diagnosis in NF2 could be of paramount importance, in view of the recent new medical treatments for NF2. Therapies for NF2 include radiotherapy, surgical and pharmacological approaches. Patients with NF2 are now being treated with Bevacizumab, which is available to those who meet nationally-agreed (unpublished) criteria. Studies have shown improvements in terms of biochemical markers, radiologic appearance [5], schwannoma-associated hearing loss and quality of life [6].

Previous publications have drawn attention to eye features in NF2 [14], however these findings are still often missed or not recognised as being part of NF2. They can also be an indicator of severity of disease, for example, epiretinal membranes are thought to indicate a more severe NF2 phenotype [15]. This might be because clinically significant retinal abnormalities are more common in NF2 individuals who have frameshift/protein truncating mutations [15] and this type of mutation is generally associated with more severe disease.

The product of the NF2 gene is ‘merlin’ (moesin-ezrin-radixinlike protein), also known as schwannomin. Merlin has at least two functions relevant to NF2. Firstly, it is a tumour suppressor protein. Loss of functional merlin contributes to resistance to apoptosis in Schwann cells, leading to cell proliferation. Secondly, merlin is involved in integrating and regulating the extracellular signals and intracellular signalling pathways that control cell fate, shape, proliferation, survival, and motility. Since embryonic development requires cells to move not only individually, but as collective, cohesive structures, this helps to explain why loss of or disruption of merlin could lead to failure of migration of neurons in the brain, resulting in cortical dysplasia. Loss of merlin, through NF2 mutation or allele loss, is thought to result in a developmental defect involving migration of the neuroblastic cells in the retina, resulting in retinal dysplasia [9], as seen in case 1.