Dupuytren’s disease is a fibrotic disorder of the palmar fascia, leading to a functional restriction of the affected finger. The etiological causes of Dupuytren’s Disease are multifactorial, with a genetic disposition concerning predominantly men in the middle age. In, this study on the one hand gene expression was analysed in Dupuytren’s tissue directly after surgery to determine the balance between the tissue inhibitors of matrix metalloproteinases and the matrix metalloproteinases (TIMP/MMP). And on the other hand Dupuytren’s fibroblasts were preincubated with  nterleukin-1β (Il-1β) and transforming growth factor-β (TGF-β) to analyze wound healing characteristics. Our data suggest that Dupuytren’s fibroblasts show an overshooting inflammatory response, which could, in turn, influence the TIMP/MMP axis. Furthermore the analysis of the TIMP/MMP ratio shows a dichotomous imbalance, which could additionally provide tissue fibrosis.

Dupuytren’s Disease (DD) is one of the most common genetic disorders of the connective tissue [1]. In most cases, the course of this benign fibromatosis begins with the formation of subcutaneous nodules followed by fibrotic cords [2]. A coincidence besides genetic disposition [1,3] is observed with regard to epidemiological data with nicotine [4,5] diabetes mellitus [6,7] liver damage, alcohol abuse [5,8], epilepsy [9] manual traumas [10] and changes of the immune system, especially increased appearance in connection with HIV [11].

The clinical symptoms of DD are described as an excessive proliferation of fibroblasts and their reinforced differentiation to myofibroblasts [12]. Myofibroblasts contain intracellular bundles of microfilaments [13]. Accordingly, a higher concentration of α-smooth muscle actin (α-SMA) protein is found in Dupuytren’s tissue [14] and serves as a parameter for their differentiation to myofibroblasts. It has been shown that transforming growth factor- β1 (TGF-β) upregulates myofibroblasts differentiation in Dupuytren’s fibroblasts, and it is assumed, that uncontrolled myofibroblasts proliferation induced by TGF- β1 leads to symptomatic nodule formation [15]. Furthermore, overexpression of TGF-β induces and supports disturbed balance of matrix metalloproteinases (MMP), diminishing the extracellular matrix (ECM) (extracellular matrix) and their inhibitors, the tissue inhibitor of metalloproteinases (TIMP). These enzymes, in turn, influence the synthesis and deposition of collagen, and therefore authoritatively strengthen the origin of fibrosis [16].

Additionally, the expression of IL-1β is also increased in Dupuytren’s tissue [17] and interestingly -as a master regulator of inflammation a [18] IL-1β induces the proliferation of fibroblasts followed by an elevated collagen synthesis. So an elevated expression of IL-1β seems to be associated with fibrotic diseases [19,20] and regulates inflammation related proteins as MMP and TIMP [21]. Furthermore IL-1β attracts immune cells, which again lead to the extensive alterations in protein expression levels of inflammatory and wound healing parameters [18].

Study approval was obtained from the Ethics Review Board of the Medical Faculty, HeinrichHeine-University Düsseldorf (Study No. 3634). The study included [22,23] patients (3 women and 20 men; average age 62 years) with DD, who underwent fasciectomy at the Department of Trauma and Hand Surgery, University Hospital, Düsseldorf, Germany. NPF from patients with carpal tunnel release served as control (n = 24; 16 women and 8 men; average age 52,5 years). Informed consent was obtained from all the patients. All patient-related data were anonymized for analysis.

Isolation and culture of the cells

Stimulation of the cells

Confluent cells were stimulated over 18 hours with 500 U/ml rh IL- 1β (R&DSystems) or over 5 days with 2 ng/ml TGF- β1 (ImmunoTools rh TGF- β1) for extracting RNA as described previously [22,23]. After stimulation for over 3 days and 5 days either with IL-1β or with TGF- β1, the cells were harvested for immunohistochemistry.

Sub confluent cells grown on cover slips were fixed with 4% Paraformaldehyde. Then, the cells were washed with PBS and permeabilized with 0.2 % Triton X-100. Unspecific bindings were saturated with 4 % Bovine Serum Albumin for 30 min at 37°C and 5 % CO2. The samples were washed and immunolabeled with anti-α– SMA antibody (Abcam) for 60 min at 37°C. The next steps were undertaken in accordance with the manufacturer’s instruction (Dako REAL Detection System Alkaline Phosphatase/RED, Rabbit/Mouse). The samples were drained by an ascending alcohol series (80%, 96 % and 100 % of EtOH) and rehydrated by Xylol. The cells were fixed on the glass cover slips with a drop of DePeX and light microscope images were taken with Zeiss Axioskop 40.

RNA was extracted using TRI Reagent after and a sonification step of 10 - 20 times. Following an incubation time of 5 min at room temperature (RT), chloroform was added and the samples were vortexed. The phases were separated and centrifuged (11,200 rpm for 15 min at 4°C). The colourless phase was taken and mixed with Isopropanol. After incubation for 10 min and centrifugation (11,200 rpm for 10 min at 4°C), the pellet was resuspended in of 75 % EtOH. Then the samples were centrifuged (8,800 rpm for 7 min at 4°C), EtOH was removed and the cells were resuspended in RNAse free water. RNA was purified with DNAfree KIT (Ambion) according to the manufacturer’s instructions.

Gene-specific primer in pairs was applied

Relative gene expression was measured with ABI Prism 7300 according to the manufacture’s protocol with the following cycling conditions: 95°C, 10 min (1 cycle); 95°C, 15 s, 60°C, 60 s (40 cycles); 4°C hold with SYBR Green (Applied Biosystems). All the samples were run in triplicates. Expression of each target gene was normalized to the housekeeping gene Glycerinaldehyd-3-Phosphat-Dehydrogenase (GAPDH).

Statistical analyses were performed by two-tailed t-test or Mann- Whitney-U test. Data were expressed as mean value and standard deviation (SD). The level of significance was considered to be p ≤ 0.05 and was designated with asterisks. TGF- β2 and TIMP3 expressions were significantly decreased in tissue of DD patients in comparison to the tissue of NPF (Figure 2A and 2B). 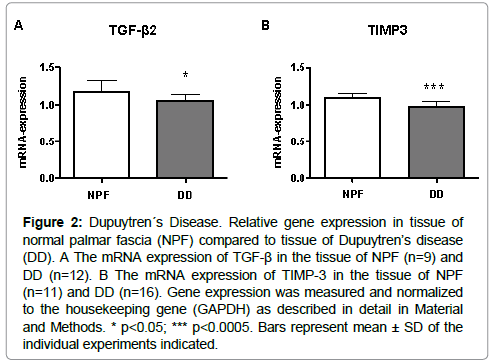 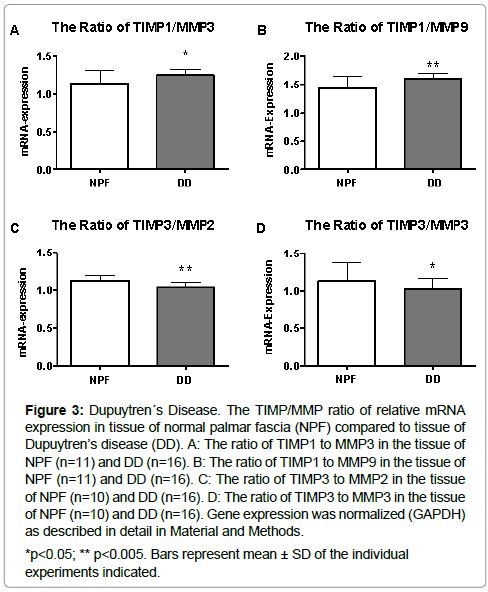 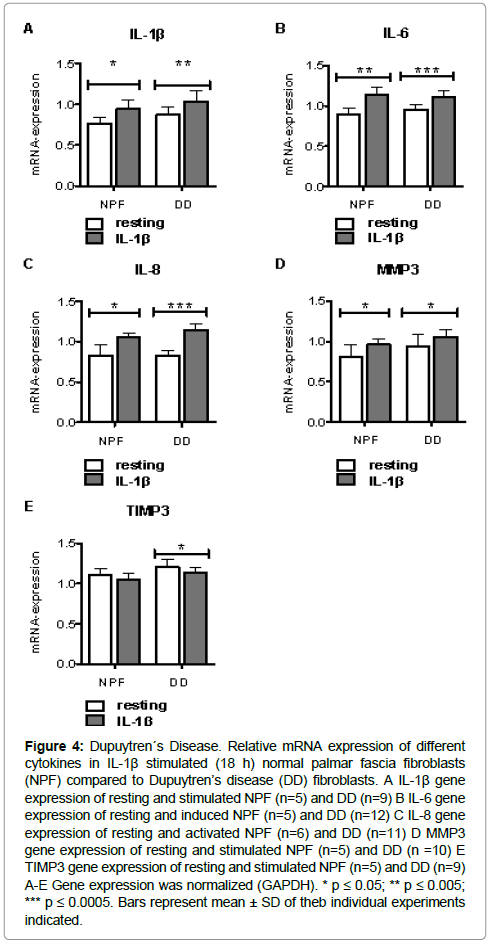 Apart from the genetic disposition DD is also associated with environmental factors such as alcohol and nicotine abuse, epilepsy, diabetes, androgens, but also immunological factors as repeated manual traumas, and HIV infection [15], etc. seem to be involved in the progression of this disease. Till date, it has not been possible to simulate these multiple factors supporting the symptoms of this disease in cell culture conditions, so this study inter alia evaluates gene expression in Dupuytren’s tissue directly after surgical extraction. So in the present work in the directly examined tissue a significantly decreased TGF-β2 concentration could be observed (Figure 2A), and according to the results shown in scleroderma, this could support fibrosis formation [24]. Furthermore, a decreasing level of TIMP3 could be determined (Figure 2b). Our findings were confirmed from Kassiri and Fan [25,26] demonstrating, that the loss or deficiency of TIMP3 enhances fibrosis. In addition, the decreased expression of TIMP3 could be the cause for the inadequate capability of Dupuytren’s fibroblasts to undergo apoptosis [27] because TIMP3 also mediates apoptosis in human colon carcinoma cells [28].

In general, TIMPs regulate the degradation or synthesis of the ECM and their function is dependent on the specific interaction with particular MMP within a given tissue. It is generally accepted that the TIMP/MMP axis determines the ECM turnover, and disturbance of this balance may lead to diseases of fibrotic natures [29]. For this reason we compared the TIMP/MMP ratio in DD to NPF. In detail the ratio between TIMP1/MMP3 and TIMP1/MMP9 was analysed, because TIMP1 is a strong inhibitor of multiple MMPs and it was observed that TIMP1 concentration is elevated in fibroproliferative disorders [30]. And so in the present study it could be demonstrated, that the expression of TIMP1 is significantly increased in relation to MMP3 and MMP9 in DD compared to NPF. MMP9 and MMP3 degrade laminin, fibronectin and several collagens. And MMP9 cleaves collagens more efficiently than other MMPs [31] and it activates further MMP, thereby also providing the symptoms of this disease. Furthermore, an inhibition of MMP3 by TIMP1 in the Dupuytren’s tissue could be a possible explanation for disease progression, because MMP3 especially degrades collagen III and it is known that the collagen III content in Dupuytren’s tissue is propagated and associated with diseased cord formation [32]. Additionally, microarray gene analysis also provides our findings, since a diminished level of MMP3 could also be determined in Dupuytren’s fibroblasts by the working group of Sprung [33].

Interestingly, if the ratio of TIMP3 and MMP2, respectively MMP3 (Figure3C, D) was calculated, the ratio is changed for the benefit of MMP2 and MMP3 in Dupuytren’s tissue compared to NPF. It was shown from Kassiri et al., that an imbalance in favor of MMP released sequestered TGF-β1 [34] within the ECM, which in turn leads to ECM deposition and fibrosis. And as mentioned above, a lower level of TIMP3 supports the formation of DD, revealing that loss of TIMP3 potentially induces renal fibrosis [25] and myocardial fibrosis through regulating inflammation and TGF-β1 activation as seen in injured TIMP3-/- mice [35].

Interestingly, MMP2 and MMP3 cleave IL-1β, whereas a long time incubation of IL-1β with MMP3 leads to a degradation of IL-1β [36]. This could be a potential explanation why our data could not provide an elevated level of IL-1β in Dupuytren’s tissue (Figure 5A) as described by other working groups [37]. Our results confirm, that the MMP/TIMP axis in DD is disturbed both in favor of an increasing level of TIMP1 in comparison with MMP3 and MMP9 and to a decreasing level of TIMP3 in relation to MMP2 and MMP3.

Furthermore, IL-1β is a highly active cytokine, which can induce a systemic or local inflammation, playing an important role in fibrosis in vivo [38]. Also IL-6 and IL-8 play key roles in disturbed wound healing and are also involved in the pathogenesis of fibrosis [39,40].

So as shown here Dupuytren’s fibroblasts seem to have an overshooting, partially changed cytokine expression in consequence of a treatment with inflammatory key mediators.

Furthermore we could determine, that in Dupuytren’s Disease the tissue homeostasis between MMP and TIMP is disturbed. But in what specific manner individual TIMP interact with particular MMP has to be elucidated in future work, because the role of TIMP regulating MMP is dichotomous and is dependent on the tissue origin [34]. But in conclusion, we have discovered additional clues that the TIMP/ MMP axis is a well-balanced homeostatic system, and if its balance lost, fibrotic diseases as DD could be intensified.

We thank Jutta Schneider, Christa-Maria Wilkens and Samira Seghrouchni for technical assistance. Data are provided from the doctoral thesis submitted from Annika Borgschulze manufactured in the Department of Trauma and Hand Surgery in the Faculty of Medicine of the Heinrich-Heine-University Düsseldorf, Germany.

All experiments conformed to the respective national guidelines.

This work was supported by the Faculty of Medicine of the Heinrich-Heine- University, Düsseldorf.