Patients Hit by Rocks during the Mt. Ontake Volcanic Eruption in Japan: An Experience of Trauma Cases

Mt. Ontake erupted at 11:52 am on September 27, 2014, and many climbers who happened to be on the mountain were killed or injured. Early the next morning, a disaster medical assistance team and mountain rescue team carried out rescue and first aid operations for a group of 26 climbers who had been evacuated to a cabin located on the highest summit in Gifu Prefecture. Of the climbers, 3 who required medical treatment were transported by helicopter to our hospital. Case 1: A 39-year-old woman had open fractures of the left clavicle, scapula, and ribs and underwent debridement under general anesthesia. Case 2: A 52-year-old man had an open fracture of the left humerus and underwent irrigation and fixation. Case 3: A 46-year-old man had severe bruising and swelling on the left side of the body due to extensive contusions with high serum levels of creatine kinase. All 3 patients had blunt injuries and penetrating injuries that were classified as secondary or quaternary blast injuries caused by the impact of high-velocity fragments of volcanic rock, debris, and gas. We report here a rare experience with blast injuries caused by a volcanic eruption in Japan.

There are currently 5 officially designated active volcanoes in Gifu Prefecture, Japan. Mt. Ontake, an active volcano that has several recorded eruptions in the past, suddenly erupted at 11:52 am on September 27, 2014, resulting in the worst volcanic disaster after World War II, where a total of 63 people were killed or are still missing. Mt. Ontake extends over Nagano and Gifu prefectures, and many climbers were affected by this disaster, which was so extensive rescue activities were carried out with the cooperation of multiple organizations, including the Japan Self-Defense Forces, police and fire departments, a disaster medical assistance team (DMAT), and the Japanese Red Cross Society. This case report describes 3 patients injured by the impact of volcanic rocks that were rescued on the climbing course on the Gifu Prefecture side and transported to our hospital.

The patient was near the mountaintop when the eruption occurred and, immediately after the eruption, was directly hit by flying volcanic rocks on her left shoulder and neck. She evacuated herself to a cabin on the Gifu Prefecture side. While waiting for rescue, she became hypotensive due to bleeding. The following morning, she was rescued by the Gifu Prefectural Police Mountain Rescue Team (MRT) and carried on a litter down to a level around the 8th station, where she received fluid resuscitation by the DMAT deployed for rescue operations and was transferred by Gifu prefectural police helicopter to our hospital.

Physical findings on admission: Her consciousness level was Japan Coma Scale (JCS)-1, blood pressure was 124/70 mmHg, and pulse rate was 67 beats/min, regular. No abnormal finding was found on the ABCDE assessment of primary survey (PS). On secondary survey (SS), a cement-like attachment of volcanic ash and a burn wound were noted in the neck, and there was a 3-cm diameter open wound in the left supraclavicular fossa caused by a rock penetrating through her climbing jacket. There was also a bruise on the right lower limb.

Examination findings: Severe anemia and hypercreatine kinasemia were noted (Table 1). Chest computed tomography (CT) and X-ray examinations revealed an open fracture of the left clavicle, with fracture of the rib, scapular, and right thumb; there was no hemopneumothorax (Figure 1a and 1b).

Table 1: Blood examination of the 3 cases on admission. 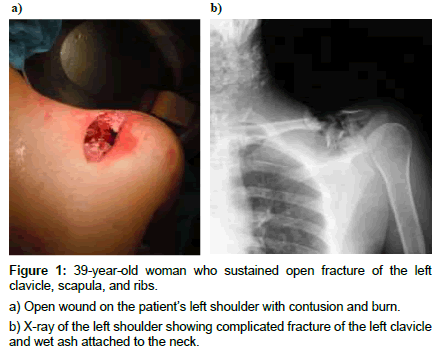 Treatment course: On the day of admission, she underwent debridement and irrigation and drainage of the Gustilo Type III-A open fracture with blood transfusion under general anesthesia. She had an uneventful postoperative course without infection and was discharged from our hospital on hospital day 12 to receive follow-up care at a local hospital.

The patient was with the patient in case 1 when he encountered the disaster at the same place. He was lying on the ground to avoid flying volcanic rocks when he was injured by the impact of a flying rock in his left upper arm. He evacuated himself to the cabin with the patient in case 1. His left upper arm was treated with a simple cardboard splint by the cabin staff. The following morning, he descended by foot, accompanied by the MRT, to the mountaineering entrance on the Gifu Prefecture side, and was transferred to our hospital by a disaster prevention helicopter.

Physical findings on admission: He had a clear sensorium with a consciousness level of JCS-0. His blood pressure was 118/81 mmHg and pulse rate was 115 beats/min, regular. No abnormal finding was found in the ABCDE assessment of PS. On SS, an open fracture of the left upper arm was noted. 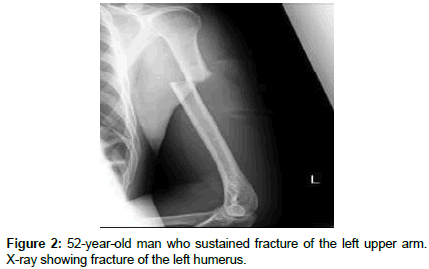 Treatment course: On the day of admission, he underwent irrigation, external fixation, and antibiotic administration for the Gustilo Type I open fracture. He had an uneventful postoperative course and was discharged from our hospital the following day to receive treatment at a local hospital. He underwent open reductioninternal fixation of the left humeral diaphyseal fracture 10 days after injury.

He was near the mountaintop on the Nagano Prefecture side, about 100 m away from the crater, when he encountered the disaster. He was lying on the ground to avoid flying volcanic rocks when he was struck by multiple rocks on the left side of his body. He reported that he became unconscious for a few minutes after the second eruption. Six people around him, who were his colleagues from work, were killed, but he regained consciousness and evacuated himself to the cabin on the Gifu Prefecture side. The following morning, he descended by foot, accompanied by the MRT, to the mountaineering entrance on the Gifu Prefecture side, and was transferred to our hospital by a disaster prevention helicopter.

Physical findings on admission: He had a clear sensorium with a consciousness level of JCS-0. His blood pressure was 133/81 mmHg and pulse rate was 96 beats/min, regular. No abnormal finding was found on the ABCDE assessment of PS. On SS, extensive bruising with subcutaneous hemorrhage and some burn wounds were noted on the left thorax, abdomen, and gluteal region, with no head injury.

Examination findings: Blood biochemistry revealed mild dehydration and hypercreatine kinasemia (Table 1). No fracture was detected by X-ray or CT, but extensive subcutaneous hemorrhage and swelling was noted in an area extending from the left side of the body to the gluteal region (Figure 3a and 3b). Multiple blisters from burn injuries were noted on the left upper and lower limbs. 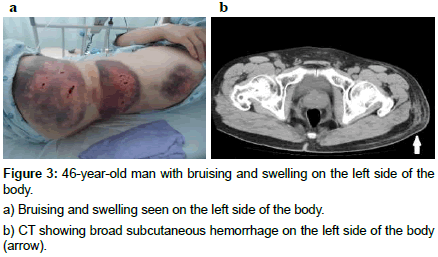 Volcanic eruptions can cause various forms of disaster, where volcaniclastic materials such as lava, volcanic rocks, and ash are generated to cause unique forms of damage. Moreover, because these damaging factors are not generated at the same time, the type of resulting disaster may vary depending on the phase of volcanic activity, alert level, and evaluation status [1].

There are 109 active volcanoes in Japan. Mt Fuji is not only one of the most famous and beautiful mountain but also an active volcano, because the last eruption was about 300 years ago. Although volcanic eruption has been a big problem in Japan from ancient time, there have been a limited number of reports on damage caused by volcanic eruption. According to the National Catalogue of the Active Volcanoes in Japan Ver. 4 (Japan Meteorological Agency, 2013), a total of 4 volcanic disasters leaving 10 or more people dead have occurred since the Showa Era, including one caused by a massive pyroclastic flow on Mt. Unzen in 2001 [2]. The most commonly reported causes of injuries are burns and respiratory disorder caused by volcanic ash and stress [3-8]. Our search of the literature could not locate any paper pertaining to injury caused by volcanic rocks.

Regarding reports from outside Japan, Tilling et al. stated that more than 300,000 people have been killed by volcanic disasters worldwide since the 17th century, with specific causes including pyroclastic flow, mudflow, and flood, which were responsible for 85% of all deaths; volcanic rock was responsible for only 4% of deaths [9]. In the 1980 eruption of Mount St. Helens in the United States, most of the 57 victims were killed by ash-related asphyxia; other causes of death included burn injury, being buried in snowmelt-type mudflow, and head injury [10]. In the 1993 eruption of the Galeras Volcano in Colombia, 6 volcanologists and 3 climbers died of injuries caused by volcanic rocks while 4 survivors were admitted to hospital with injuries caused by volcanic rocks, such as fracture, contusion, and burn [11].

In the disaster reported herein, the flying/falling velocity of volcanic rocks from the eruption was estimated to exceed 100 m/s, which is comparable to the velocity and energy produced by firearms [12]. The patients in cases 1 and 2 had fractures from secondary blast injuries caused by volcanic rocks, but did not have a fatal outcome because they had no severe head injury. In case 1, bone destruction was severe, similar to that observed in patients suffering from gunshot wounds or blast injuries encountered in war [13]. In case 3, the patient was considered to have suffered secondary blast injuries when his body was hit by multiple volcanic rocks, which did not cause fracture or damage to vital organs. He also reported loss of consciousness immediately after eruption, which was possibly associated with quaternary blast injuries, including lung damage caused by inhalation of hydrogen sulfide gas or volcanic ash, as well as multiple burn injuries over the body surface [14]. All 3 patients showed elevated creatine kinase levels much higher than those observed in patients with regular injuries, suggesting extensive crush injury and destruction of muscle and subcutaneous tissue.

Patients suffering from injuries caused by volcanic rocks often develop dehydration, hypermyoglobulinemia due to extensive damage to bone, muscle, and soft tissues, hyperkalemia, and hypercreatine kinasemia, which must be corrected by early fluid resuscitation. Patients who develop compartment syndrome of the extremities due to severe tissue crushing may require a relaxing incision at the affected site. Open fractures are often associated with infection, and thus require appropriate levels of debridement and wound treatment depending on the severity of blast injury.

The ongoing investigation into the cause of death of the victims of the Mt. Ontake volcanic eruption disaster did not involve autopsy or autopsy imaging; however, postmortem examination revealed severe injuries caused by volcanic rocks in many victims, and airway burns and lung injuries caused by inhalation of hydrogen sulfide was noted in fewer victims, suggesting the involvement of secondary and quaternary blast injuries [15].

Although it may be difficult to predict or prevent volcanic eruptions at present, building evacuation centers near the crater can help reduce the effect of the disaster. In particular, fatal injuries caused by high-speed flying volcanic rocks can be prevented by evacuating to a shelter and wearing a helmet for head protection. The present findings also suggest that the severity of burn or blast injuries can be reduced by wearing clothes made of materials that are waterproof, heat-insulating, and able to absorb external forces.

We encountered relatively rare cases of injuries caused by a volcanic eruption disaster. These injuries were classified as secondary or quaternary blast injuries caused by the impact of volcanic rocks, which could have led to a fatal outcome in the presence of severe head injury. Treatment consisting of early fluid resuscitation and wound care including immediate debridement must be administered.

We would like to thank all the concerned organizations involved for their cooperation in the current investigative activities, and we also pray for the repose of the souls of the victims.