Objective: Timing of post-radical prostatectomy (RP) radiotherapy (RT) in patients with high risk prostate cancer continues to be debated. This is a retrospective review aiming to evaluate the influence of pre-RT prostate specific antigen (PSA) values on postprostatectomy RT outcomes in one Australian center.

Method: Eligible patients were treated at the Royal Adelaide Hospital between January 2004 and December 2013, excluding those with nodal or distant metastatic disease pre-RT, or those who received neoadjuvant androgen deprivation therapy pre-RT. The primary endpoint of biochemical failure-free survival (bFFS) was defined as time from RP to date of biochemical failure (bF). Covariates of Gleason score, post-RP PSA, and pre-RT PSA were further analysed in relation to bFFS.

Results: 103 of 122 patients underwent final analysis (8 were excluded for the above reasons; 11 had missing data). Median follow-up from RP was 60 months. Kaplan-Meier (KM) estimates of 1, 2, 3, 4 and 5-year survival probabilities were 93.5%, 83.4%, 82.4%, 76.6% and 71% respectively. There was no statistically significant correlation between bFFS and pathological T-stage (p=0.1), surgical margin involvement (p=0.7), or RT total dose (p=0.8). Analysis based on KM survival distributions and log-rank tests suggest that pathological Gleason score may have some influence on bFFS (p=0.04). Doubling the pre-RT PSA whilst holding all other factors and covariates constant, increases the hazard of bF at a particular time-point by approximately 19% on average.

In Australia, prostate cancer is the second most common cause of cancer deaths in men, with 19,233 new cases diagnosed in 2013 [1]. Of those who undergo radical prostatectomy (RP) to treat their prostate cancer, up to 50% will have histopathology showing at least one adverse feature [2]. These include surgical margin involvement, extracapsular extension, or seminal vesicle involvement. These patients have an approximately 40% risk of developing biochemical recurrence in the future, with median time to recurrence of 2.4 years [3].

There exists extensive literature to support consideration of offering patients radical radiotherapy (RT) in the post-RP setting [4], with the goal of lengthening biochemical failure free survival (bFFS). Radiotherapy in this setting can be initiated in multiple different clinical scenarios. These include shortly post-RP in patients who have adverse pathological features but with undetectable serum Prostate Specific Antigen (PSA), so-called “adjuvant RT” (ART); shortly post- RP in patients who have adverse pathological features, and inadequate biochemical response; and delayed post-RP in patients who later develop biochemical failure (“salvage RT”) (SRT).

In terms of predictive factors of disease relapse in patients who have received RT in either of these settings, recurring factors in the literature include pathological Gleason Score, pathological T stage, involvement of surgical margin, PSA velocity prior to RT, PSA prior to RP, and most prominently, PSA prior to RT [5-14].

As a large public tertiary referral centre, we were interested to review the outcome of our patients who have undergone RT after RP, focusing particularly on their pre-RT PSA value.

Relevant institution Human Research Ethics Committee approval was obtained to collect and analyse data of patients referred to and treated at our centre with ART or SRT, between January 2004 and December 2013.

Patient data was retrieved from ARIA Oncology-Information System (Varian Medical Systems), medical records (both paper and digital), OACIS Clinical Information System (TELUS Health), and local private pathology laboratories. Follow-up details were collected up to at least the censor date of 31st of March 2016. Data were analysed using Microsoft Access and R statistical software for Windows. Exclusion criteria included patients with nodal or distant metastatic disease prior to RT, and patients who received neoadjuvant androgen deprivation therapy (ADT) prior to RT. The definition of biochemical failure used in this study was the same as that of the RAVES study protocol page 39 (“first occasion following radiotherapy that the serum PSA is ≥ 0.40 ng/mL and rising (from the previous value). The date of biochemical failure will be the date of the first PSA level ≥ 0.40 ng/mL”) [15]. Patients in this review were not enrolled in RAVES.

The primary endpoint of bFFS was defined as time from RP surgery to date of biochemical failure.

Note that we did not attempt to analyse outcomes by ART vs SRT referral intent. Such retrospective analyses are inherently flawed due to intrinsic differences between the two groups and the fact that an indeterminate number of the adjuvant group will never relapse.

Post-RP RT was delivered by 3D-conformal technique or intensity-modulated RT technique, to a dose range of 60-66 Gy, delivered in 1.8 to 2 Gy fractions.

Patients were typically seen initially 4 to 6 weeks after completing RT, and then at 3 to 6 month intervals for the first two years after treatment. Afterward, patients were followed at least once annually. Post-RT serum PSAs were requested by the treating Radiation Oncologist, Urologist, and/or General Practitioner. Patients with a rising serum PSA level had further evaluation for recurrent disease, including history, exam, and diagnostic imaging.

The primary endpoint of bFFS was estimated utilizing the Kaplan-Meier (KM) method. Log-rank test was utilized to find suitable candidates for regressors. Small sample size ensured only limited statistical power of the performed tests for effect of factors on biochemical relapse. Cox regression was employed to investigate the influence of the analysed covariates and factors on bFFS.

As the primary covariate of interest (pre-RT PSA) has a positively skewed distribution, it was transformed by using logarithm with base 2 function, which resulted in a relatively symmetric distribution with sufficient number of cases in every sub-region of interest. This was utilized in the Cox regression analysis. The increase of log2 (pre-RT PSA) by one unit is equivalent to doubling absolute pre-RT PSA. Undetectable PSAs were assumed to be equal to 0.01.

After careful examination of results from the exploratory data analysis (EDA) and initial Cox proportional hazard modeling, the Penalized Cox proportional hazard regression was chosen as the most appropriate strategy for quantifying the effect of pre-RT PSA on bFFS. The coefficients of log2 (pre-RT PSA) and post-operative PSA were penalized in the final model by using Ridge methodology to prevent collinearity.

Given that there is potential for patients who received RT shortly post-RP with undetectable PSA to never develop biochemical failure even without RT, a selection bias would be introduced if all patients were included in our analysis. We therefore employed methodology to eliminate selection bias by analysing “samples” of patients. Each “sample” contains all patients who had PSA failure during their respective follow-up period and a fraction of the patients who did not have PSA failure during their respective follow-up period. We utilized data from historical Randomized Controlled Trials (RCT) on survival probability of patients who do not receive RT in this setting to determine if a patient is included or excluded in a sample.

Between January 2004 and December 2013, 122 patients received post-RP RT at the Royal Adelaide Hospital. Eight of these patients were excluded (3 patients had N1 disease, and 5 patients had received neoadjuvant ADT). Of the remaining 114 eligible patients, 11 had missing critical data, resulting in 103 patients undergoing analysis.

Median follow-up period was 60 months. This is considered sufficient to minimize bias introduced by patients lost to followup.

Table 1 shows descriptive statistics for the two groups of patients: eligible patients and patients considered in our analysis. Pathological T3 (pT3) and Gleason 7 disease dominated, whereas surgical margin status, as well as the two subgroups of RT doses were reasonably well balanced. The descriptive statistics are similar for the two groups; hence our results are not expected to be affected significantly by selection bias.

Figure 1 displays KM overall biochemical failure free survival (bFFS) probabilities based on measuring time to failure as duration from prostatectomy to PSA failure or censoring. The estimates of 1, 2, 3, 4 and 5-year survival probabilities were 93.5%, 83.4%, 82.4%, 76.6% and 71% respectively. The standard errors of the obtained survival probabilities vary from 2.4% to 4.5%, providing opportunities for determining practical confidence intervals. Analysis based on KM survival distributions and log-rank tests suggest that pathological Gleason score may have some influence on bFFS. The test for Gleason score was significant (p=0.04, Figure 2), however due to the small sample size the tests for several known risk factors returned statistically insignificant p-values at 5% significant level, namely pT-stage (p=0.1), surgical margin involvement (p=0.7) and RT total dose (p=0.8). Cox regression analysis was utilized to obtain the hazard ratio (HR) associated with one unit increase of log2 (pre-RT PSA). The result was an average hazard ratio (HR) of 1.19 (95% confidence interval of 0.98-1.45). In other words, doubling the pre-RT PSA whilst holding all other factors and covariates constant increases the hazard of biochemical failure at a particular time-point by approximately 19% on an average. 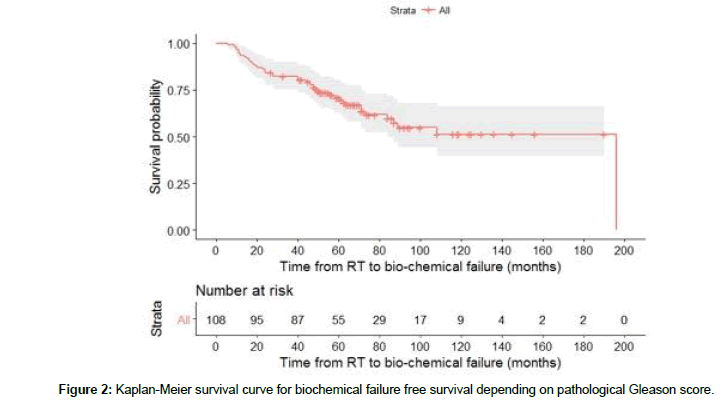 This retrospective review evaluating the influence of pre-RT PSA values on post-RP RT outcomes in one Australian centre, within its limitations, further confirms bFFS advantages with initiation of RT at a lower PSA value.

Thompson et al. in their systematic review [16] recommended that radiotherapy should be administered at the earliest sign of PSA recurrence as lower levels of pre-RT PSA have been shown in multiple studies to be associated with improved bFFS.

The rate at which serum PSA is rising prior to RT is also a factor that should be taken into account. In ASCO’s endorsement of the 2013 AUA/ASTRO guideline on adjuvant and salvage radiotherapy after prostatectomy [19], the authors acknowledged the many technical issues relating to the measurement of the rate of PSA rise. They also recommended still offering SRT to men with short PSA doubling time (PSADT), as they are at highest risk of clinically meaningful progression and stand the most to gain from SRT, even though Stephenson et al. [5] reported a poorer biochemical response to SRT in those men with short PSADT. In other words, although knowing the patients’ PSADT will unlikely alter recommendations to proceed with SRT; however it may be considered as a predictive factor relating to outcome of treatment.

Despite having congruent evidence to support initiation of post-RP RT at “low” PSA levels, the challenge of identifying which patients and at what post-RP PSA level to initiate RT still remains. The Australian eviQ guidelines on SRT [20] included “persistently elevated PSA >6 weeks post radical prostatectomy” and “detectable and rising PSA” as indications for treatment. However, it did not provide actual values of PSA levels, further emphasizing the clinical conundrum.

Furthermore, the emerging use of 68Ga-PSMA-11 PET/CT scans in the detection of recurrent prostate cancer must also be taken into account, as clinicians are beginning to utilize them to guide initiation of RT. One significant advantage would be avoiding offering locoregional treatment to patients who have recurred distantly. A large retrospective analysis [23] demonstrated strong correlation of serum PSA level and positive scan, however, unfortunately, there is also a small risk of false negatives (some patients with PSA >10 ng/ml did not have a positive scan). Future studies to evaluate 68Ga- PSMA-11 PET/CT imaging findings in the setting of post-RP RT, and its impact on bFFS, metastasis-free survival, disease-specific survival etc. are also warranted.

Limitations to this study must be considered when interpreting its results. This is a single centre retrospective study, which lacks additional data regarding PSA velocity, treatment toxicity, and clinical progression. Due to the dominance of pT3 and Gleason 7 disease, our findings are most relevant to those subsets of patients. Similarly, results should be considered most applicable to cases where the PSA is within the interval 0.1-0.3, which is the inter-quartile range of the pre-RT PSA values in our analysis. This conservative approach ensures that our recommended range is not influenced by outliers and observations not following the underlying data pattern.

This single institution retrospective study, within its limitations, provides reasonable evidence for influence of pre-RT PSA on post-RP RT bFFS outcomes, in particular in patients with pT3 and Gleason 7 prostate cancer. This argues for consideration of earlier referral for RT.

No conflict of interest to disclose.

We thank Radiation Oncologists at the Royal Adelaide Hospital for support and advice.