Cathepsins are cysteine proteases secreted in different stages of Fasciola species of flukes. Cathepsin B is predominantly found in eggs, metacercariae and the newly excysted juvenile (NEJ) stages of the fluke but not in adults. Cathepsin B3 was identified in F. gigantica NEJs that facilitates the migration of the excysted parasite to the liver. Here, RT-LAMP was utilized in the detection of F. gigantica during the prepatent period or the period between infection and the demonstration of the parasite i.e. from the egg to the NEJ stages. We investigated the feasibility of identifying the cathepsin B3 gene in various samples including snails, as the intermediate host, the plasma, sera and feces of goats as the definitive host animal targeting the Cathepsin B3 gene. Out of 90 snails, 61% were detected positive using RT-LAMP, 26% (32/122) in fecal samples, 4% (5/122) in sera and 70% (86/122) in plasma of the suspected infected goats. These findings provide further indication for early diagnosis of fasciolosis and a novel approach for the improved disease management and control.

Fasciola species are helminth parasites that cause fluke pestilence in cattle, buffaloes, goats and sheep worldwide and became a critical pathogen of humans. Fasciolosis is a zoonotic disease with various reports on the incidence of human infections [1-3]. It is brought about by two trematode species, Fasciola hepatica and Fasciola gigantica. F. hepatica is a concern in Europe and America but the distribution of these species overlaps in Africa and Asia [4] while F. gigantica is the most common species infesting ruminants in the tropical parts of Asia and Africa [5] which includes the Philippines. Many of fluke species contribute to a great loss in economic and medical aspects, with losses of economic productivity and lives of livestock animals particularly in ruminants and illnesses in humans [6]. They are one of the serious reasons contributing to the negative impact on animal health, welfare and global food security [7-9]. The complication of this disease worsens by occurrence of resistance to the available anti-fluke drugs in both animals and human [10,11]. Adult fluke is the reproductively active stage and affects the physical, nutritional and immunological aspects of the animal host. However, the tissue-penetrating invasive newly-excysted juvenile (NEJ)/juvenile stage causes major damage to the host tissues during their migration from the gut lumen, through the hepatic parenchyma to the bile ducts. Besides, diagnosis is usually done during the chronic stage of the infection since it can only be done through examining of the fecal samples when flukes are already full-grown and eggs are already laid. This implicates delayed diagnosis which impedes administration of the necessary control measures.

Cathepsin L and B are the significantly expressed cysteine proteases in many stages of Fasciola species which are also the virulence gene targets and proposed vaccine antigen candidates [12-15]. Cathepsins obtained from NEJ and immature juvenile flukes were shown distinctive from the enzymes of adult parasites [12-17]. In a report, mature cathepsin B3 was present only in Fasciola spp. NEJs but none in adult parasites and its ability to digest fibronectin, a native component of host’s connective tissue, suggest that the possible function of secreted cathepsin B3 may be in digesting the host’s tissues to facilitate the migration of the excysted parasite to the [12,14,15,18]. According to Anuracpreeda et al. [5], cathepsin B3 gene switch off during maturation of the parasite implicating that these enzymes may be used by the juvenile stages to digest host tissues during their penetration and migration to the liver; whereas catB1, which is present in all stages and performs general digestive function. Since Cathepsin B is released into the host fluid in a fairly large amount, it may possibly be an excellent candidate for immunodiagnosis of fasciolosis by F. gigantica, particularly the early phase of infection [4].

Cathepsin B has been detected using RT-PCR and real time PCR in Fasciola hepatica from sheep [12]. At present, no extensive study has been done using RT-LAMP for detecting Cathepsin B3 of Fasciola gigantica. Loop-mediated Isothermal Amplification (LAMP) assay has been developed to diagnose and detect food borne [19] and infectious diseases. More recently, LAMP assay is developed and used to diagnose and detect parasitic infections [20-22]. Hence, this study confirmed that Cathepsin B3 is detectable in Fasciola gigantica eggs and validated the RT-LAMP assay on the known vector snail (Lymnea sp.) and from the sera, plasma and feces of goats raised in Fasciola endemic areas.

Intermediate hosts of 90 snails (Lymnaea spp.) were randomly collected in the river and flooded rice fields from where the goats were sampled. Definitive hosts of 122 goats from 7 barangays of Science City of Muñoz, Nueva Ecija, Philippines were subjected for extraction of blood including the collection of their feces via rectal collection. Collected samples were put in storage prior to processing. Fecal samples were processed in the laboratory using sedimentation technique to determine the presence of fluke eggs. Sampling sites for both goats and snails were reported to have stable Fasciola endemicity of 60% to 80% at any given time. The snails and the plasma, sera from whole blood and the remaining fecal samples were processed for RNA extraction and RT-LAMP assay.

LAMP primers were generated for Fasciola gigantica from cathepsin B3 (cat-B3) mRNA, complete cds with GenBank Accession No. AY227675.1 using the software LAMP Designer 1.10 (Table 1). Briefly, the LAMP primer mix was prepared from 100 μM stock of each primer preparation: 2.5 μl of F3 and B3 primers; 10 μl of FIP and BIP primers and finally, 5 μl of F-loop and B-loop primers. A 12.5- μL RT-LAMP premix was prepared: 7.2 mM MgSO4, 1.2x RT-LAMP buffer, 1.2 M Betaine, 0.8 mM dNTP mix, 0.5 μl of the LAMP primer mix, 4U of Bst DNA polymerase, 20U of reverse transcriptase and 1 μL of RNA extract from the positive control. Incubation was done at 60°C for 1 hour. After completion of the reaction, 1 μL of 10X SYBR Green I fluorescent dye was added into each tube. Positive reactions displayed a visible green color, whereas the negative reactions remained orange due to the unbound SYBR Green I. Confirmation through gel electrophoresis was performed using 1.5% moleculargrade agarose gel with 1X Tris-Actetate-EDTA buffer stained with Gel Red (Biotium).

Table 1: Nucleotide sequences of the LAMP primers targeting the Cathepsin B3 gene.

Positive control was prepared from eggs which were extracted through an incision at the upper third of the fluke’s body just below the acetabulum where the uterus is located (Figure 1). The eggs were subjected to RNA extraction and were used for optimizing the RTLAMP protocol. 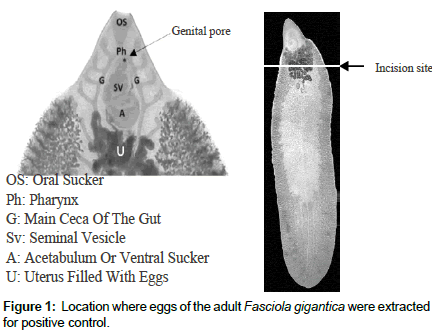 Figure 1: Location where eggs of the adult Fasciola gigantica were extracted for positive control.

RT-PCR and RT-LAMP were able to amplify the target gene, Cathepsin B3 mRNA in the Fasciola gigantica eggs and none in the adult neither in the non-target cDNA of Calicophoron calicophorum, an amphistome.

The optimal reaction temperature and time for RT-LAMP assay based on the dye test, dye and fluorescence test and by gel electrophoresis can be achieved after at 60°C to 64°C for 90 minutes. Positive in dye test indicates when the reaction changes color from orange to green after the addition of SYBR Green. Positive in fluorescence test is indicates bright luminescence under the UV or blue light while a multiple ladder-like bands appear in agarose gel electrophoresis.

For field validation, detection of cathepsin B3 among samples using RT-LAMP is shown in Tables 2-4. Out of the 90 randomly collected snails, 59 or 65.55% tested positive, 70.49% or 86 out of 122 plasma samples were positive, 4.1% from the sera and 26.22% from the fecal samples. Positive RT-LAMP results in plasma, serum and feces of goats were visualized under blue light and confirmed by agarose gel electrophoresis (Figures 2 and 3). Table 2: Prevalence of Cathepsin B3 among samples using RT-LAMP.

In parallel, fecalysis using sedimentation test showed a prevalence of 45.90% or 56 out of 122 goats infected with fasciolosis. The entire life cycle of Fasciola sp. takes about 17-18 weeks or almost 4 months including the stages in the intermediate (snail) and final (vertebrate) host. Almost half of the entire life cycle of the fluke is spent inside the snail where the development into miracidia, sporocyst, redia and cercariae take place. This is substantiated by the result of the RTLAMP test in which the prevalence of Cathepsin B3 in the snails is very high (65.55%). This is already indicative of the snails infected with Fasciola larvae since they were collected from water bodies in villages endemic to fasciolosis.

The presence of Cathepsin B3 gene in the plasma can be explained by the presence of NEJs released after ingestion of metacercariae from plants or contaminated water. The NEJs are released in the duodenum and migrate for 1.5 mos in the circulation until they reach the liver. During migration and development, NEJs encounter different host tissues and macromolecules, dynamic physicochemical microenvironments, and host responses such as blood coagulation, complement activation, in addition to other innate and acquired immune responses [23]. This could also be the reason why Cathepsin B3 was rarely detected in the sera speculating that it might have been trapped in the clot.

The presence of Cathepsin B3 in the blood can be described as the newly excysted juveniles (NEJ) naturally emerge in the duodenum and migrate to the liver. Following a period of blood feeding and growth in the liver, they move to the bile ducts, where they obtain blood by puncturing the duct wall, undergo maturation, and produce eggs [24]. Although adult flukes are reproductively active and are responsible for the pathology in mammalian hosts, NEJ are the cause of significant damage to host tissues when migrating from the gut lumen to the bile ducts [25-30]. During migration and development, NEJs encounter different host tissues and macromolecules, dynamic physicochemical microenvironments, and host responses such as blood coagulation, complement activation, in addition to other innate and acquired immune responses (Andrews) [1,31-36]. Although the presence of Fasciola eggs in fecalysis indicates adults in the goats. Amplifying Cathepsin B3 cDNAs in the feces could have come from the Fasciola eggs [37-42].

The presence of Fasciola eggs in fecalysis only indicates the presence of adults where, newly excysted juvenile (NEJ) flukes taken in by goats from freshly ingested metacercariae are not detected. Hence, the dewormer of choice often would be for adults where hepatic destruction is already in the advance state. Strategic deworming calls for identifying infected animals to prevent fluke resistance from developing. Since the study shows that RT-LAMP technique can amplify the target gene Cathepsin in the snails, plasma, serum and feces of goats, it can be a new platform for controlling fasciolosis by detecting animals harboring NEJ flukes and by detecting Fasciola infected snails in the area [43]. This economical and quick method holds promise for fasciolosis diagnosis in countries with resourcelimited settings. The procedure, targeting Cathepsin B3 recommends an excellent diagnosis during the prepatent period for fasciolosis and can advance the comprehensive field surveillance-response approaches in the Philippines and any developing countries.

Grateful acknowledgments to our colleagues at the College of Veterinary Science and Medicine, Central Luzon State University for the support. Above all, to God for the wisdom and knowledge.

This study was funded by the Philippine Council for Agriculture, Aquatic, and Natural Resources Research and Development (PCAARRD)

The authors whose names are listed below certify that they have NO affiliations with or involvement in any organization or entity with any financial interest (such as honoraria; educational grants; participation in speakers’ bureaus; membership, employment, consultancies, stock ownership, or other equity interest; and expert testimony or patent-licensing arrangements), or non-financial interest (such as personal or professional relationships, affiliations, knowledge or beliefs) in the subject matter or materials discussed in this manuscript. We have no conflict of interest.

All procedures performed in studies involving human participants were in accordance with the ethical standards of the institutional and/or national research committee and with the 1964 Helsinki declaration and its later amendments or comparable ethical standards.

c) Statement on the welfare of animals

All applicable international, national, and/or institutional guidelines for the care and use of animals were followed.