Results: We examined 53 breast cancer specimens and 10 normal tissues adjacent to tumor. The results showed a 58.5% promoter methylation in PTEN gene and none in normal tissue. PTEN methylation was observed in advanced stages III-IV (81.8%, 18 of 22, P=0.015) and higher grades G2-G3 (71.4%, 20 of 28, P=0.043) of disease. The correlation of PTEN methylation with clinical stage and tumor grade was found to be statistically significant. Nuclear PTEN expression was detected in 73.6% (39 of 53) cases of breast cancer and in the remaining 26.4% (14 of 53) cases expressional loss was observed. The loss of PTEN expression was observed in all normal tissues (10 of 10). The loss of PTEN expression was significantly correlated with patient’s age (P=0.028) and clinical stage (P = 0.029). The expressional loss was observed in 12 (38.7%) cases among 31 methylation positive cases, whereas among 22 methylation- negative cases, only 2 (9.1%) cases were seen as immunostaining negative with the statistically significant value (P=0.016).

Breast cancer is the most common cancers among women worldwide [1]. It is also very common among Saudi females. Reports from different regions of Saudi Arabia demonstrate that majority of breast cancer patients are in the age group from 30 to 44 years [2]. However, this cancer is more common in older women above the age of 50 years worldwide but it is frequently diagnosed in younger women in Saudi Arabia.

PTEN is a tumor suppressor gene located at chromosome 10q23 [3,4]. It is a negative regulator of cell-survival signaling and has both lipid and protein phosphatase activity. Its major substrate is phosphatidylinositol-3,4,5-triphosphate (PIP-3), a direct product of phosphoinositol-3-kinase PI3K activity [5]. This substrate mediates growth factor-induced activation of intracellular signaling through serine-threonine kinase Akt, which promotes cell survival and proliferation. The Akt complex is activated through phosphorylation in actively proliferating cells. PTEN down-regulates the activity of Akt through dephosphorylation, thereby regulating phosphoinositol- 3kinase-triggered signaling negatively. Another study in breast cancer demonstrated that induction of apoptosis by low levels of PIP-3 and phosphorylated Akt is associated with high levels of PTEN [6]. PTEN gene is found to be mutated in a number of human malignancies such as melanoma [7], glioma [8], endometrial cancer [9], lung carcinoma [10], neuroblastic tumors [11], prostate cancer [12], cervical cancer [13] and breast cancer [14]. However, some investigators observed very low rate of somatic intragenic PTEN mutations and suggested that some other factors might be responsible for PTEN inactivation. Recently, the loss of PTEN expression has been discussed in many studies. In an immunohistochemical study, frequent loss or reduction of PTEN expression was observed in primary breast cancers [15]. Furthermore, the loss of PTEN expression due to promoter methylation of this gene is reported in cervical carcinoma, gastric cancer and non-small-cell lung cancer [13,16,17]. However, a little is known about the promoter methylation and its relation to loss of PTEN expression in breast cancer patients. Therefore, an effort was made in this study to investigate the PTEN promoter methylation and its correlation with the loss of PTEN expression in breast cancer.

Fifty three paraffin embedded blocks of tumor samples from breast cancer patients and 10 normal tissues adjacent to the tumors were collected between 2015 and 2017 from the archives of Department of Pathology, King Fahad Central Hospital, Abu Ariesh, Saudi Arabia. Clinical and pathological information, including age, tumor grade, clinical stage, lymph nodes metastasis and biomarkers, was also obtained. This study was approved by the ethics committee of King Fahad Central Hospital.

Tissue sections (thickness, 5 μm) were cut from paraffin blocks. The sections were used to detect the PTEN expression in the breast carcinoma and normal breast tissues. Genomic DNA was also isolated from these sections using a ZR DNA FFPE Tissue Kit (Zymo- Research, USA) according to the manufacturer’s instructions. The purity and concentration of extracted DNA were analyzed by gel electrophoresis and ultraviolet spectrophotometry. DNA samples were frozen at ‑70ºC until use.

DNA from tumor specimens as well as normal tissue was subjected to bisulfite modifications using an EZ DNA Methylation-Gold kit (Zymo Research, USA) as per procedure given in manufacturer’s protocol. The modified DNA was used as a template for methylation specific-PCR (MSP) as described previously [18]. Briefly, all samples were first amplified with primers specific for unmethylated DNA at the P15 locus to confirm the successful modification. All DNA samples were successfully amplified with the pair of primer, whereas unmodified DNA sample did not show amplification. The PCR was carried out in 25 μl volume containing 10 mM Tris-cl (pH 8.3), 50 mM KCl, 1.0 mM MgCl2, 100 μM dNTP, 0.5 μM of each primer, 1 unit of hot start Taq DNA polymerase (Thermo Fisher Scientific Inc.), and 25 ng bisulfite treated DNA. Primers for unmethylated p15 were 5’-GTGATGTGTTTGTATTTTGTGGTT-3’ and 5’-CCATACAATAACCAAACAACCAA- 3’, yielding a 154-bp product. Primers for methylated PTEN were 5’-TTCGTTCGTCGTCGTCGTATTT-3’ and 5’- GCCGCTTAACTCTAAACCGCAACCG- 3’, yielding a 206-bp product [19]. The PCR amplification conditions were followed as initial denaturation at 94°C for 5 min, followed by 32 cycles of 94ºC for 30s, 60°C (for unmethylated p15 gene) or 62°C (for methylated PTEN gene) for 30s and 72°C for 60s, followed by final extension at 72°C for 10 min. The PCR product (5 μl) was loaded on agarose gel (2%), staining was performed with ethidium bromide and observed under UV light. For positive control pUC19 bacterial strain DNA (methylation-negative) treated with SssI methyltransferase (Zymo Research, USA) followed by bisulfite treatment was used for methylated allele while the same DNA was used as a negative control for the unmethylated allele. A pUC19 DNA without pretreatment of SssI methyltransferase prior modification and a pUC19 DNA without any treatment were used as negative controls for the methylated allele.

PTEN immunohistochemical staining was performed with an indirect biotin avidin system on the sections that were made from a representative block for each case. The slides were deparaffinized using xylene and graded ethyl alcohol, followed by rinsing with distilled water. Antigen retrieval was performed by boiling the slides in sodium citrate buffer, pH 6.0 in a microwave oven at 90ºC for 20 min. The sections were incubated in 0.3% hydrogen peroxide for 30 min to block the endogenous peroxidase activity. The slides were incubated with anti-PTEN antibody (Biogenic, San Ramon, CA, USA) overnight in refrigeration at 4ºC, subsequently incubated with a biotinylated universal secondary antibody and with an avidin horseradish peroxidase. After colour development with diaminobenzidine (DAB) nuclei were lightly counter stained with hematoxylin. For positive control stained slides (PTEN-positive) from patients with normal tissue were used in each set of experiment. For negative controls, the same procedure was followed with the exception of primary antibody. The staining was considered as either negative (-) or positive (+). The loss of PTEN expression was considered when the groups showing less than 5% tumor cell staining. It was assessed as negative. Anti-PTEN antibody (PTEN, [28H6]) is an IgG1 mouse monoclonal raised against human PTEN.

The statistical analysis was carried out with SPSS 18.0 software (Chicago, Illinois, USA) The Mantel-Haenszel χ2 test was used to determine the correlation of promoter methylation and PTEN gene expression with clincopathologic parameters. The relationship between promoter methylation with PTEN gene expression was also analyzed by χ2 test. Statistical differences were considered significant at P<0.05. 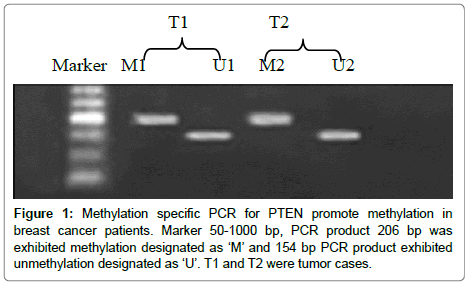 Among tumor specimen examined for promoter methylation according tumor grade, 44.0% (11 out of 25) cases were methylated in tumor grade G1 and 71.4% (20 out of 28) in grades GII-GIII. The relation between promoter methylation and tumor grade was found to be statistically significant (P=0.043). A statistically significant association between clinical stage and methylation was also observed (P=0.015) as 41.7% (5 of 12) cases were found to be methylated in clinical stage I, 42.1% (8 of 19) cases in stage II, and 81.8% (18 of 22) in stages III-IV. However, no such correlations were observed with patient’s age, tumor grade, and lymph node metastasis, ER, PR and HER2. Figure 2: Immunohistochemical staining for PTEN expression in breast tissues (A) expression in normal tissue adjacent to tumor tissue (B) loss of expression in tumor of breast cancer patient.

The relation between promoter methylation and expression of PTEN gene

Correlation of promoter methylation with PTEN gene expression was determined in 53 cases of breast cancer. Thirty one cases were methylated and 22 cases were unmethylated at promoter region. Among 31 methylation-positive cases, loss of expression in PTEN gene was observed in 12 (38.7%) cases whereas among 22 methylation-negative cases, only 2 (9.1%) cases were seen as immunoreactions negative. The relation was found to be significant with their P value 0.016 (Table 3).

The role of PTEN identified as a novel tumor suppressor gene has been studied in a variety of cancers. Loss of heterozygosity and mutation of PTEN have been reported in melanoma, glioblastoma, kidney cancer, lung cancer, and breast cancer [20-22]. In particular, the mutation of PTEN appears with a frequency of up to 50% in endometrial cancer [23] compared with other cancers, including glioblastoma (28%), prostate cancer (30%), and melanoma (15%) [23]. In breast cancer, a 10-40% loss of heterozygosity (LOH) has been identified at the chromosome 10q23 region that contains the PTEN gene [25-27]. LOH at the 10q23 region is functionally associated with the occurrence of breast cancer. Although LOH at 10q23 is frequent, the somatic PTEN mutation rate is <5% and the majority of PTEN gene mutations occur in advanced and metastatic breast cancer [6].

In addition to gene mutation, epigenetic regulation, including promoter hyper methylation, has been demonstrated to alter tumor suppressor gene expression and contribute to tumorigenesis. As one of the most recurrent gene alterations, DNA methylation significantly affects chromosomal formation, gene expression and DNA replication [28,29]. CpG islands in the promoter or nearby regions are frequently methylated, leading to the silencing of gene transcription. Recent studies have also shown that CpG islands of the PTEN promoter are methylated in various human malignancies such as endometrial carcinoma [30], gastric [16], non-small-cell lung carcinoma [17], cervical cancer [13,31], including breast cancer [14,32]. The methylation status of the PTEN promoter CpG Island was analyzed in the present study. Promoter methylation was seen in 58.5% (31 of 53) cases of breast carcinoma. Clinicopathologic parameters were correlated with the PTEN promoter methylation. A significant correlation was observed between PTEN methylation and, tumor grade and tumor stage. A high methylation rate (71.4%) was occurred in G2-G3 grades as compared to lower grade G1 (44.2%). The advanced stages III-IV of tumors was also exhibited the high frequency of promoter methylation when compared to stages I and II (Table 3). These findings suggest that promoter methylation of PTEN gene is associated with advanced stage and higher grade of the disease.

The authors report no conflict or interest in this work.