Trapdoor orbital fractures are uncommon and tend to occur in children and young adults. Medial orbital wall fractures with associated incarceration of the medial rectus muscle have been reported as the most common cause of pseudo-Duane’s retraction syndrome. We report a case of a 10-year-old patient with isolated medial wall trapdoor orbital fracture with right medial rectus muscle entrapment visible on the CT scan. The patient complained of nausea and vomiting especially with abduction of the right eye and showed signs of pseudo-Duane’s syndrome. It was satisfactorily resolved via a transcaruncular approach.

Trapdoor fracture was first described by Soll and Poley as a variety of blowout fracture with minimal displacement of the bone fragment [1]. Most published cases of trapdoor fractures have involved the orbital floor, and children are particularly susceptible to this type of fracture. We present a case of pseudo-Duane’s retraction syndrome associated with an isolated medial wall trapdoor orbital fracture that was treated surgically using a transcaruncular approach.

A 10-year-old boy presented 4 days after receiving a blow to the right orbit from a partner’s knee while playing basketball. He did not lose consciousness or report vision loss, but complained of dizziness and vomited immediately after the injury. He was referred by the emergency department to our ophthalmology service to assess the orbital trauma.

On examination, the patient exhibited palpebral ecchymosis and right mild blepharoptosis. His vision was 20/20 in each eye, with the absence of either relative afferent pupillary defect or exophthalmos. Slit-lamp examination was normal in the right eye. Ductions of the left eye were full and the patient could adduct his right eye past the midline and the abduction was not limited though a slight retraction (enophthalmos) upon attempted abduction of the right eye was noted (Figure 1) with headache and nausea in that position of gaze. Computed tomography (CT) showed a medial wall trapdoor orbital fracture with slight entrapment of the medial rectus muscle (Figure 2). The operation was performed 10 days after injury under general endotracheal anaesthesia by transcaruncular approach. Few days after the operation, nausea and vomiting had ceased and ocular examination was within normal limits. 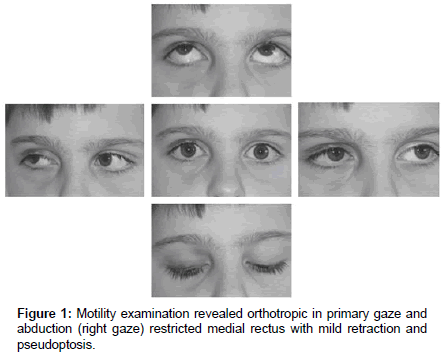 Trapdoor fractures have mainly been described in children and young adults. Jordan et al. theorise that this is due to the elasticity of the bones at that age, producing a greenstick fracture on blunt trauma and allowing prolapsed orbital tissue to be caught and trapped in the fracture site like in a “trapdoor” [2]. Few papers have been published recently concerning isolated orbital medial wall trapdoor fractures with medial rectus muscle entrapment and Brannan et al. described the largest series, consisting of 9 cases [3].

Orbital trapdoor fracture with incarceration of the muscle represents a surgical emergency, so prompt recognition, evaluation, and treatment is required to prevent serious complications. McCully et al. recognise paediatric trapdoor fractures by minimal signs of soft tissue contusion, a relative lack of enophthalmos, and a linear fracture with incarceration of the per orbital tissue which may be minimal on imaging and may occasionally be associated with an oculocardiac reflex on attempted ocular motility [4]. In our case, medial rectus muscle incarceration in a trapdoor fracture presented in a similar manner, with a mild appearance of trauma and a vagal response of nausea and vomiting on ocular motility. It seems that trapdoor-type fractures are usually associated with nausea and vomiting, and this should make us suspect their presence, as observed by Bansagi and Meyer [5]. On the other hand, this characteristic clinical presentation after orbital blow fracture exhibiting minimal trauma had already been described by Jordan et al. which used the term “white-eyed blowout” for orbital floor fractures. However, several cases of “whiteeyed” medial orbital wall fractures with incarceration of the medial rectus muscle have also been described [6,7].

Limitation of ocular motility is variable, depending on the degree of entrapment and the location of the fracture. Brannan et al. suggest that medial wall fractures located more posteriorly allow greater movement of the muscles without motility being limited. However, more anterior medial wall fractures may lead to marked abduction deficits [3]. Entrapment was more posterior in the patient reported here without marked limitation of motility, although it is also possible that only the soft tissue surrounding the medial rectus muscle was entrapped. The relatively small size of the fracture could also have accounted for the minimal involvement in ocular motility.

Some cases of medial wall trapdoor fracture with incarceration of the rectus medial muscle may present as “pseudo-Duane’s retraction syndrome” or “retraction syndrome”, characterised by horizontal diplopia, restricted abduction, limited adduction and globe retraction on abduction, accompanied by narrowing of the palpebral fissure and pseudo ptosis [8]. In the classic Duane’s retraction syndrome, however, there is markedly restricted abduction, with eyeball retraction and narrowing of the palpebral fissure on adduction, due to a fibrotic lateral rectus. Miller reported the first case of entrapment of the medial rectus with retraction on abduction in a patient with fracture of medial wall [9], subsequent case reports have documented medial wall fractures with entrapment, both with and without retraction. In most cases, the retraction had been present on abduction rather than on adduction and these findings is associated with variable ocular motility patterns at presentation [8-11]. In our case, on attempted abduction a narrowing of the palpebral fissure and retraction of the globe was observed with minimal involvement in ocular motility along with the presence of nausea and vomiting were the only signs of entrapment of the medial rectus muscle. Although the most common cause of pseudo-Duane’s syndrome is entrapment of the medial rectus muscle due to trauma, it may occur as a result of other changes in the orbit [8,9] and it has even been described in lateral orbital wall fracture with entrapment of the soft tissue surrounding the lateral rectus muscle [12].

The main indications for surgical intervention are symptoms of medial rectus muscle entrapment; trapdoor fracture is not in itself an indication for surgery [13]. In cases associated with retraction syndrome, retraction may persist due to scarring of the orbital tissue and contraction of the tissues around the medial rectus despite freeing the orbital tissues [11]. This is why we advocate repairing entrapped fractures as soon as possible (<15 days), given the improved outcomes associated with early intervention.

We report a case of a 10-year-old patient with isolated medial wall trapdoor orbital fracture with right medial rectus muscle entrapment visible on the CT scan. The patient complained of nausea and vomiting especially with abduction of the right eye and showed signs of pseudo- Duane’s syndrome. It was satisfactorily resolved via a transcaruncular approach.