Rare Presentation of a Rare Disease Subcutaneous Emphysema due to an Endo-Bronchial Non-Hodgkin’s Lymphoma: A Case Report

Endobronchial form of non-Hodgkin’s lymphoma (NHL) is a rare cause of airway obstruction, which is often confused with other respiratory pathologies like bronchial asthma. Subcutaneous emphysema and pneumomediastinum as complications of endobronchial NHL are extremely rare, and reported only once before. We report a rare case of endobronchial NHL, who presented with features of poorly controlled bronchial asthma, later complicated with pneumomediastinum and extensive subcutaneous emphysema. Urgent contrast enhanced computer tomography (CECT) of chest and neck demonstrated a large infiltrative mass lesion at the carina with both intraluminal and extraluminal components extending to both main bronchi, resulting in near total occlusion of the right main bronchus. Fiber-optic bronchoscopy revealed an endobronchial mass at the carina with significant obstruction of bilateral bronchi. She subsequently underwent debulking surgery followed by chemotherapy.

Non-Hodgkin’s lymphoma is a heterogeneous group of lymphoproliferative malignancies comprising more than 20 different types [1]. It accounts for approximately 90% of all malignant lymphomas, while remaining 10% is shared by Hodgkin’s disease (HD) [2]. Most NHLs arise in lymph nodes or other lymphoid tissues such as spleen, thymus and Waldeyer’s ring. However, nearly one third is encountered in organs other than lymph nodes, hence termed as extra nodal NHL [3]. Skin, stomach and small intestine are recognized as the predominant organs affected by extra nodal NHL [3]. Involvement of intrathoracic structures by NHL is reported in 45-48% of cases. Although mediastinal lymph node involvement is the most common intrathoracic manifestation, it can affect multiple extra nodal sites, including thymus, thyroid, pulmonary parenchyma, pleura, pericardium, heart, chest wall, and breast [4]. However, endotracheobronchial NHLs have been reported extremely rarely, even in cases of advanced disease stage [5].

Endobronchial tumors present with non-specific respiratory symptoms and features of central airway obstruction [6]. However, only a single case of subcutaneous emphysema developing in association with NHL in trachea has been reported before [7]. We report an exceedingly rare case of endotracheobronchial NHL which was complicated with subcutaneous emphysema and pneumomediastinum in addition to features of obstructive airway disease.

A 27-year-old female presented with wheezing for 3 weeks duration associated with shortness of breath. The symptoms were reported to be episodic at the outset, however progressed rapidly. She complained of predominantly dry cough for the same duration, but never experienced hemoptysis. There was no associated fever, chest pain or constitutional symptoms. She denied past history of similar episodes or bronchial asthma.

She was initially managed at a local health institute as an acute exacerbation of bronchial asthma. In spite of repeated nebulization and treatment with intravenous steroid, her symptoms remained uncontrolled. She developed subcutaneous emphysema on fifth day of admission and was transferred to respiratory unit II of National hospital-Kandy, Sri Lanka for further management.

On admission she was dyspnoic and appeared uncomfortable. She was an averagely built lady having neither clubbing nor lymphadenopathy. Oxygen saturation while breathing room air was 93%. Her pulse was regular with a rate of 128 beats per minute and blood pressure was 100/70 mmHg. Respiratory system examination revealed bilateral rhonchi and diminished breath sounds on the right side. Abdominal examination was unremarkable.

Basic blood investigations including complete blood count, C-reactive protein level, and erythrocyte sedimentation ratio, renal and liver profile were within normal limits. A chest x-ray done at emergency unit revealed obvious subcutaneous emphysema in the neck region. But, an ill-defined mass in the midline causing narrowing of the left main bronchus was recognized only following conscientious examination of the radiography (Figure 1). 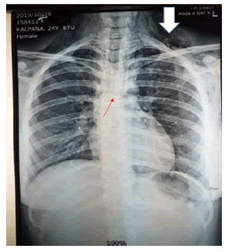 Her condition rapidly deteriorated over the next day with progressive dyspnoea and severe subcutaneous emphysema. She developed stridor and otolaryngology opinion was sought urgently and laryngeal odema was diagnosed. A repeat chest radiograph showed new onset pneumomediastinum along with extensive subcutaneous emphysema. Contrast enhanced computer tomography (CT) of chest and neck demonstrated marked pneumomediastinum, subcutaneous emphysema, and a large infiltrative mass lesion at the carina with intraluminal and extraluminal components extending to both main bronchi, resulting in near total occlusion of the right main bronchus (Figure 2). Fiber-optic bronchoscopy revealed an endobronchial mass placed at the carina with almost complete luminal obstruction of right main bronchus and approximately 60% obstruction of the left main bronchus.

She was transferred to a specialized thoracic surgical facility for further management. Argon plasma coagulation and debulking of the mass with repair of posterior bronchial wall laceration was performed via rigid bronchoscopy, followed by ‘Y’ tracheobronchial stenting. Histological and immunohistochemical analysis confirmed the diagnosis as anaplastic large cell type non-Hodgkin’s lymphoma (Figure 3).

Figure 3: A) Histology slide (under H and E) of the anaplastic large cell lymphoma. B) Immunohistochemistry slides with CD 30 reactivity.

Post-operative period was complicated by massive bleeding requiring intensive care treatment for several days. Later, she was commenced on chemotherapy consisting of cyclophosphamide, vincristin, doxorubicin and prednisolone. Follow up CT imaging revealed a residual mass after 2 months, albeit reduced in size. Proton emission tomography scan (PET) did not reveal any hypermetobolic foci to suggest metastasis. Tracheobronchial stent was removed after 3 months, and currently she is being treated under oncology care.

Endobronchial involvement of NHL was first reported by Dawe et al., in 1955 [5]. Since then only few isolated cases have been reported in literature implying its rarity. Endobronchial lymphoma commonly occurs in the setting of systemic disease, mostly in cases of HD than NHL [8]. Two types of endobronchial NHL have been described. Type 01 is characterized by diffuse distribution of submucosal nodules throughout the bronchial tree in the presence of systemic disease. This pattern is believed to be due to haematogenous or lymphatic spread of lymphoma, and typically associates with pulmonary parenchymal involvement as well. In contrast, type 02 is characterized by localized involvement of tracheobronchial tree in association with locoregional lymph node enlargement. Clinical evidence of airway obstruction is anticipated more often in type 02 [5,9]. According to the clinical and radiological features, this pattern was most likely in our patient.

According to a case series by Eng et al., endobronchial tumors of NHL are located predominantly involving major bronchi similar to our case, followed by lobar bronchi and trachea [10]. However, Solomonov et al., presented a report on 8 patients where the tumor was located involving lobar bronchi in all cases indicating the heterogeneity of the condition [8]. Endobronchial NHL can present with symptoms in relation to systemic effects or endobronchial mass effect [8]. Severity of symptoms varies according to the degree of bronchial obstruction. However, most common symptoms include cough, dyspnoea, wheezing and hemoptysis. Since these symptoms are non-specific they are likely to be misdiagnosed for commoner respiratory pathologies [5]. Our patient also presented with shortness of breath with wheezing suggesting obstructive airway disease which was initially misinterpreted as due to bronchial asthma, which is much more prevalent among young adults. However, doubt about the diagnosis was raised due to poor treatment response, absence of similar episodes in the past, short history of disease without diurnal variation of symptoms and lack of other associated features like atopy and family history. This highlights the value of clinical tools including history and examination during clinical evaluation to recognizeatypical cases, thereby preventing misdiagnosis. Additionally, acute tracheobronchitis, foreign body aspiration, vocal cord dysfunction, endobronchial malignant or benign tumors should be considered as the main differential diagnosis for a similar presentation.

Diagnosis of NHL requires histological examination. According to literature, lymphoma originating from mucosa-associated lymphoid tissue (MALT) is the commonest variety of primary pulmonary lymphoma. Large B cell lymphomas are infrequent [8]. Anaplastic large cell lymphomas are a rare aggressive form of NHL occurring in 2-3% [7]. Treatment and prognosis of bronchial NHL depend on histological type. Systemic chemotherapy is the treatment of choice for anaplastic large cell lymphoma, due to high chemosensitivity [7]. Radiation therapy is an

Adjuvant for cases with tumor mass >10 cm [8]. For patients with central airway obstruction with significant symptoms, tracheal stenting followed by chemotherapy and/or radiotherapy has been suggested. However, in cases with severe airway obstruction by an unknown tracheal tumor similar to our case, debulking surgery is likely to remain as the preferred initial treatment, since this provides prompt relief of obstruction, and simultaneously allows obtaining diagnostic sampling [7].

Endobronchial malignant lymphoma is a rare cause of large airway obstruction. Subcutaneous emphysema is reported exceedingly rarely in association with NHL. Due to its non-specific symptoms, it is frequently misdiagnosed for commoner respiratory pathologies such as bronchial asthma. However, atypical presentation and poor response to therapy should raise the possibility of rare diseases among differential diagnosis. Furthermore, meticulous examination of basic imaging such as chest radiography is important to recognize subtle signs of mediastinal pathologies which are otherwise likely to be missed.

Written informed consent was obtained from the patient for publication of this case report and accompanying images. A copy of the written consent is available for review with the corresponding author.

All the authors have declared that they have no conflicts of interest.