Rectal Prolapse of Intussusception in Infant: About Two Observations at the University Hospital Center of Bouake

Prolapse of the anus of the invagination pudding is a rare and serious complication of acute intestinal intussusception. It is a surgical emergency that requires early diagnosis and management. We report two cases of acute intestinal intussusception in two infants with favorable outcome after surgical treatment. Through these two observations, we present the diagnostic and therapeutic difficulties related to our context.

Acute intussusception is a telescoping of a downstream intestinal segment by the upstream intestinal segment [1]. It is an abdominal emergency of the infant that performs an intestinal obstruction by strangulation with its corollary of evolutionary complications. One of the rare but serious complications of this condition described in the literature is the prolapse of the invaginated pudding anus [1]. It is very often unrecognized evoking erroneous pathologies [1,2]. We report two cases observed at the University Hospital Center of Bouake (RCI) emphasizing the diagnostic difficulties and the therapeutic behavior.

A 14-month-old female infant, with no particular history, was referred by the pediatric department for the management of rectal prolapse, which had been going on for about a week. The infant had initially diarrhea made of stool first liquid then glairy without streaks of blood. There was no paroxysmal abdominal pain or fever. The mother took him to a health center where antibiotic treatment was prescribed. Two days later, the mother noticed the appearance of a reddish mass prolapsed by the anus. She again visited the health center where the diagnosis of rectal prolapse was made. The mass has been reduced and medical treatment of unspecified nature has been prescribed. In front of the recurrence prolapse associated this time with two food vomitings and a stop of materials and gases, the mother undertook a traditherapy by applications of decoctions on the mass. It is in front of the persistence of the symptomatology after 48 hours that the mother took the child to the pediatric urgency of the University Hospital of Bouake who referred it to us. The physical examination revealed a poor general condition and an intestinal mass prolapsed by the anus (Figure 1). Rectal examination revealed a free space between the anal canal and the prolapsed bowe. The diagnosis of acute intussusception with anastomosis prolapsed by the anus was retained. The girl was operated on urgently. Inoperative, it was an ileal-caecocolic invagination with the progression of the pudding throughout the colon. There was a failure to join the caecum. It was performed after a partial manual reduction of the pudding, an intestinal resection followed by a termino-lateral ileocolic anastomosis. Immediate operative follow-ups were simple. The child came out J7 post-operative. The decline to eleven months was satisfactory. The pathological examination of the operative specimen did not find any specific lesion. 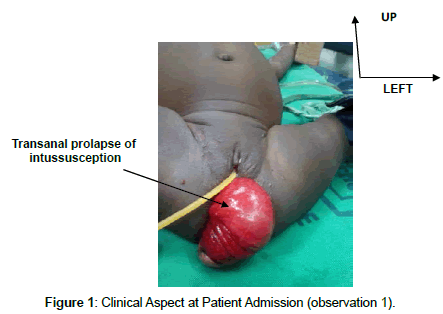 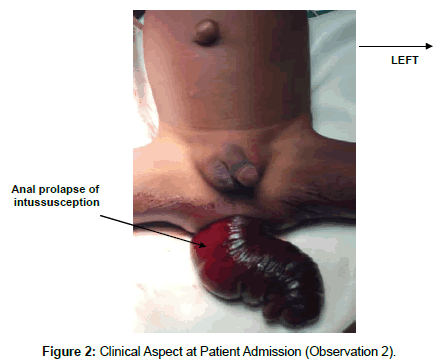 Prolapse of the invaginating pudding anus in the intestinal tract is exceptional: It was described for the first time by CHIGOT in 1944 [3]. Its frequency varies according to the series but it is rare: three out of 22 cases (13.6%) in the Rakotoarisoa series [4]; 7 cases out of 93 (7.5%) cases of invaginations in the Bankolé series [5]; 16 out of 198 cases (8%) in the Ramachandran series [6]. No case yet published in Bouake. The progression of the invagination pudding until its prolapse by the anus would be linked to a failure of the cecum and to a long mesentery [1,2,7]. We found in operation in our patients, a lack of adhesion of the caecum. For some authors, the rectal prolapse of the blood sausage is the prerogative of the recto-sigmoid forms [8]. To these factors must be added the diagnostic delay of intussusception especially in our African countries [1,2,4,7]. The diagnosis of intussusception in the acute stage has been misunderstood in our patients. Indeed, when the symptomatology of this affection is complete and classic, refusal of the bottle (or vomiting), rectorragy and palpation of the blood sausage on the physical examination), the diagnosis is quickly evoked. This triad is not always found and concerns only 7.5 to 40% of patients [9]. The absence of stereotyping of the symptomatology of this affection would be then at the origin of the errors and delays diagnostic, resulting in the externalization of the invagination roll by the anus. The prolapsed pudding of the anus is often confused with ano-rectal prolapse as is the case in our observations. To avoid this confusion, you need a good physical examination of the perineum. Indeed, during digital rectal examination, the existence between the anal canal and the rectum, of a part, and the prolapsed intestine, of another part, of a free space admitting all to a finger makes it possible to affirm the diagnosis of acute intussusception with prolapse of the pudding by the anus. Whereas in the case of anorectal prolapse, the finger cuts at 1 or 2 cm from the anal margin [1,2,6,7]. The hypothesis of an acute intestinal intussusception with prolapse of the anus by the anus should be in the mind of any clinician who has to examine an infant in the emergency department for a mass prolapsed by the anus. Imaging at this stage is not very contributive to the diagnosis [2]. Regarding the treatment, we did a surgical treatment in both cases. Gnassingbé in Lomé [1], Raherinantenaina in Antananarivo [2] and Midekor-gonebo in Abidjan [7] also performed surgical treatment. Some authors, however, have obtained the disinvagination of the extruded belly by an opaque enema [6,10]. All these authors are nevertheless unanimous that the treatment of choice is the non-operative treatment. It would then be necessary to consider not only the availability of the technical platform, but also the formal contraindications of this therapeutic option: discovery of a pneumoperitoneum on the abdomen without preparation, acute peritonitis and significant alteration of the condition general with shock [11]. We did not attempt an opaque enema reduction because of the difficulties in meeting the conditions for such treatment in our context. In most African series, treatment is immediately surgical because of the poverty of the technical plateau, affordability, the weight of traditional habits favor delay in consultation and care.

Acute intussusception may be complicated by prolapse of the pudding by the anus. This is a rare complication related not only to a failure to attach the caecum and excessive length of the mesentery. The diagnosis is essentially clinical and the treatment remains surgical in our context. Its prevention requires the early diagnosis of acute intestinal intussusception.