Purpose: To present a case with adrenal insufficiency with relapsing visual deterioration due to optic nerve Injury after peribulbar anesthesia.
Methods: A case report.
Results: A 74-year-old man with adrenal insufficiency underwent cataract surgery of his left eye under peribulbar anesthesia. The best-corrected visual acuity (BCVA) of his left eye before the surgery was 20/125. During anesthesia, optic nerve injury by needle was noted. His bare visual was 20/125 with normal intraocular findings on the first postoperative day. However, BCVA of his left eye decreased to hand motion at 15cm of his left eye on the postoperative day 3 without obvious relative afferent pupillary defect. He was admitted for methylprednisolone intravenous injection therapy for 3 days. BCVA of his left eye recovered to 20/400 after the therapy. However, 2 days later, his visual acuity was downhill below 20/400 and he was admitted for steroids therapy again. BCVA of his left eye was stable around 20/30 after 4 months followup.
Conclusion: The prognosis of partial optic nerve injury is relatively good. Steroids therapy or replacement treatment for patient with adrenal insufficiency for ophthalmic surgery under local anesthesia could be considered under some condition (such as after an eventful surgery) or we should discuss with his/her internist before starting the treatment.

The mechanism of traumatic optic neuropathy (TON) is direct and indirect injury to the optic nerve or nerve sheath [6-8]. Current treatments for TON are conservative observation, steroids therapy, surgical decompression and surgical decompression combined with steroids therapy [6-9]. Vision recovery in conservative group was 40-60%, which was relatively good and previous studies showed there was no significant difference in conservative groups and control groups [9,10]. However, the management for TON is still controversial [6-9].

We report a rare case of relapsing optic neuropathy followed by optic injury after peribulbar anesthesia in a patient with adrenal insufficiency who had good response to steroid therapy.

A 74-year-old man with old stroke, diabetes mellitus and adrenal insufficiency underwent phacoemulsification and intraocular lens implantation for cataract of his left eye with peribulbar anesthesia. The best-corrected visual acuity (BCVA) of his left eye before the surgery was 20/125. While having peribulbar injection of 50:50 mixture of 2% lidocaine and 1% ropivacaine, he jerked with head tilting. Ocular massage was done immediately and he didn’t report any decrease of visual acuity nor severe ocular pain after the injection (any s/s should happen after optic nerve injury? to rule out retrobulbar hemorrhage). The following surgery was uneventful and his vital sign was stable during the operation. The ocular examination on the first postoperative day was normal with bare visual 20/125 and intraocular pressure was 13mmHg of his left eye. However, BCVA decreased to hand motion at 15 cm of his left eye on the postoperative day 3 without obvious relative afferent pupillary defect. Fundus examination showed some retinal hemorrhage at inferior temporal quadrant with faint vitreous hemorrhage (Figure 1). 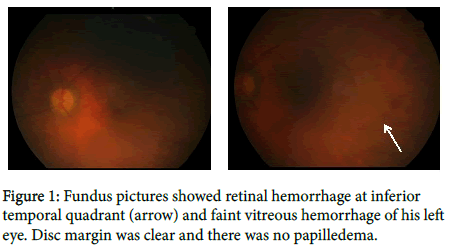 Figure 1: Fundus pictures showed retinal hemorrhage at inferior temporal quadrant (arrow) and faint vitreous hemorrhage of his left eye. Disc margin was clear and there was no papilledema.

Computed tomography revealed some inflammation change and enlargement around the level of the left optic nerve canal (Figure 2). An optic nerve injury after peribulbar anesthesia was diagnosed. He was admitted to the hospital with light sense negative subjectively, but positive light reflex objectively and started with methylprednisolone 80mg intravenously every 12 hours for 3 days. Visual field examination showed right superior homonymous quadrantanopia and superior arcuate scotoma with mean deviation of -13.07 dB of his left eye after initial treatment (Figure 3). His BCVA of his left eye before discharge was 20/400 and methylprednisolone was tapered to prednisolone 20mg twice a day. Figure 2: The computed tomography showed some inflammation changes and enlargement around the level of left optic nerve canal (arrow) and there was no retrobulbar hemorrhage. However, his visual acuity was downhill below 20/400 when he returned to our clinics 2 days after his discharge. Ocular examination showed decreased vitreous hemorrhage. Repeated visual field examination showed the same right superior homonymous quadrantanopia and superior arcuate scotoma with a mean deviation of -14.84 dB of his left eye. He was admitted again for methylprednisolone 60mg intravenously every 12 hours for another 3 days. BCVA of his left eye was 20/60 before discharge and visual field of his left eye revealed decreased superior arcuate scotoma with mean deviation of -10.69 dB (Figure 4). His methylprednisolone was tapered to prednisolone for 12 days. BCVA of his left eye was 20/30, four months later and there was no further visual deterioration noted after his second hospitalization (Figure 5). 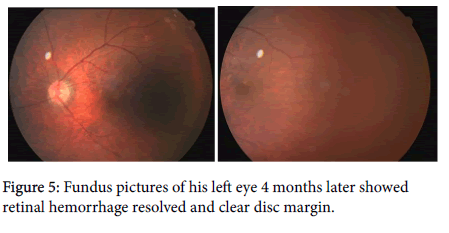 There are two parts to be considered in this case. Firstly, optic nerve injury after peribulbar anesthesia, partially is most likely. Secondarily, we have to assume adrenal insufficiency may affect the clinical course perioperatively and postoperatively.

The use of retrobulbar anesthesia could lead to higher risks of ocular complications as ptosis, diplopia, retrobulbar hemorrhage, scleral perforation, central retinal artery/vein occlusion, retinal artery occlusion, optic nerve injury, stimulation of oculocardiac reflex or brainstem anesthesia, which are rare, but with higher risks of blindness [2-4]. Compared to topical anesthesia, it provides less inadvertent ocular movement and less supplementary injection for anesthesia [1]. Optic nerve injury by needle injection or compartment syndrome induced by large volume of anesthetic agent was reported by previous studies [2-5]. The improvement of visual recovery of optic nerve injury was usually limited [11,12] and there was one case report in which the patient had partial visual recovery after steroid therapy [5]. (Reference, any similar cases can be used to compare to our case with same condition, partial injury, but poor result). In our case, the mechanism of the injury may be partial optic nerve injury by needle injection of peribulbar anesthesia. Computed tomography showed few inflammation changes around the level of the left optic nerve canal without obvious retrobulbar hemorrhage. Fundus examination revealed only few retinal hemorrhages at inferior temporal quadrant without macular involvement, which was compatible with his superior arcuate scotoma in the first visual field examination. After steroids therapy, his superior arcuate scotoma was resolving with improved visual acuity. The findings in imaging and ocular examination can support the partial optic nerve injury with good prognosis in our case.

What is interesting in our case is that there was a relapsing blurred vision of his left eye, 2 days after the first discharge and his vision was improved after the second intravenous methylprednisolone injection. According to our review, there was no literature mentioned about such recurrent or relapsing optic neuropathy after optic nerve injury. Cortisol response to stress increases to 75-150 mg/day after major surgery and 25-50 mg/day after minor surgery, which is significantly higher than the normal endogenous cortisol level (10 mg/day) from previous study [13]. The perioperative steroids replacement therapy for adrenal insufficiency to prevent cardiovascular collapse was well known since 1950s [14]. Caroline et al. provided a guideline for dosage of supplementary steroid for management of adrenal insufficiency during the stress of medical illness and surgery [13]. She suggested usual replacement dose of 15-30 mg/day hydrocortisone for minor surgery (under local anesthesia and less than 1 hour, e.g., routine dental examination and skin biopsy.) We also know that the use of steroids for TON is to reduce the abnormal swelling of the injured optic nerve, inhibition of apoptosis of retinal ganglion cells and promotion of axonal regrowth [7,9]. Although recent studies showed, that there were risks of a serious advert reactions after steroids therapy [7-9]. We assumed that his cortisol level was relatively lower than normal population preoperatively due to his adrenal insufficiency. The response to stress of the surgery and partial optic nerve injury may even worsen the condition. Because of that the downhill of his vision between two episodes may related to the lower cortisol level than normal maintenance level and recovery of his vision after steroids supplementation. We believed that is the reason he had a good response after each steroid therapy.

There are guidelines of steroid supplementation in patients with adrenal insufficiency for major surgical procedures, including cholecystectomy, cardiothoracic surgeries, pituitary adenomectomy [13]. However, there was no enough evidence or experience for perioperative steroids therapy for ophthalmic surgery previously (can we suggest from this case?) We believed optimal usual replacement dosage of steroids for ophthalmic surgery could be considered in patient with adrenal insufficiency in the future under some condition (such as after an eventful surgery). Magnetic resonance imaging (MRI) is current golden standard for optic nerve injury which provides much more detailed information such as fluid accumulation, nerve enlargement or swelling than computed tomography dose. However, the arrangement of MRI was not immediate and usually time consuming. Computed tomography can be done rapidly and can still give us important information such as if there is retrobulbar hemorrhage or not or any inflammation change in the orbital cavity. In our case, the inflammation and enlargement around optic nerve gave us a hint of optic nerve injury and we could presume further treatments.

There are many ways for local anesthesia for cataract surgery and each surgeon should choose the appropriate anesthesia for each patient based on patient’s characteristics. The treatment of TON is controversial but steroids therapy for optic nerve injury without head trauma or other major trauma could still be considered to prevent retinal ganglion cell loss and inhibition of inflammation. The prognosis of partial optic nerve injury is relatively good. Steroids therapy or replacement treatment for patient with adrenal insufficiency for ophthalmic surgery under local anesthesia could be considered under some condition (such as after an eventful surgery) or we should confirm it with his/her internist before starting the treatment.