Paraneoplastic syndromes are defined as a conglomerate of clinical disorders that are caused by neoplastic diseases, specifically lung cancer. The clinical symptomatology of paraneoplastic syndromes usually precedes the diagnosis of the associated neoplasm, however, according to our current literature; the extent of the symptoms is not associated with the size of the tumor. Syndrome of inappropriate anti-diuretic hormone release (SIADH), also known as Schwartz-Bartter syndrome, is commonly caused by small cell lung carcinoma (SCLC) and is characterized by euvolemic hypoosmolar hyponatremia, which will lead to a low serum osmolality as well as a significantly high urine osmolality in the absence of other medical conditions such as adrenal insufficiency, heart failure, cirrhosis, and diuretic syndrome among others. The clinical presentation related to SIADH varies based upon the severity of the hyponatremia as well as the acuteness of the decrease in serum sodium levels. Symptoms due to SIADH include anorexia, nausea, vomiting, and in more severe cases, cerebral edema due to rapid of onset hyponatremia thus causing confusion, restlessness, coma, seizures, and respiratory arrest.

The Patient is a 65 y/o male with a significant past medical history of HTN and hyperlipidemia who presented to the hospital with a 3-month history of cough associated with hemoptysis, weight loss and fatigue. He admits to a 40-yr pack smoking history and is a frail appearing thin man. He recently made a trip to India, where his symptoms became progressively worse upon returning to the states. Subsequently, upon admission to the hospital, he was found to be negative for TB on quantiferon gamma assay. He worked as an engineer for General Atomics. On physical examination, his vital signs were WNL, had expiratory wheezing and decreased breath sounds in the lower left lobe. Cervical adenopathy was negative. Systemic examination was unremarkable. His labs revealed a normocytic normochromic anemia and PLTS/WBC WNL. CMP revealed values WNL, except for a significant hyponatremia (Table 1).

The Patient met the Barter-Schwartz criteria for SIADH (Table 1). This diagnosis was made after ruling out the other causes of SIADH (pt’s medication record was insignificant). Patient’s euvolemic hypoosmolar hyponatremia was not correctable via fluid restriction or 3% hypertonic saline, and thus a search for a pulmonary source as the culprit was undertaken.

A chest CT reveled a non-specific perihilar mass with numerous enlarged nodes. Subsequently, he underwent a CT guided needle biopsy and was diagnosed with SCLC (Figures 1 and 2). His symptoms progressively got worse with multiple neurological deficits and bone pain. A bone scan showed varying degrees of lytic lesions on the vertebrae. After several discussions with the medical team on his prognosis, patient decided on treatment. The Patient was encouraged to start on Etoposide/Carboplatin combination chemotherapy. 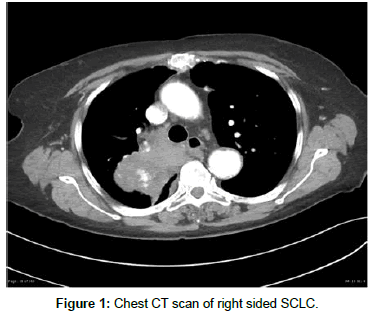 His hyponatremia was closely followed throughout his chemotherapy regimen. Importance was given to the correction rate, which was kept to <8-12 mEq/day to prevent central pontine myelinolysis (CPM). After 2 weeks of chemotherapy, his hyponatremia gradually corrected to a [Na+] of 129 mEq/L. By 10 weeks, it had risen to a stable 135 mEq/L [1,2].

According to the American Cancer Society, lung cancer in 2017 still remains the culprit for being the leading cancer killer in both men and women. SIADH is a disorder of impaired water excretion. ADH (antidiuretic hormone) secretion results in a concentrated urine output and therefore a reduced urine volume. In most patients with SIADH, ingestion of water does not adequately suppress ADH secretion and the urine remains concentrated. This leads to water retention and increased total body water. Subsequently, this lowers the plasma sodium concentration via dilution. Furthermore, the increase in total body water expands the extracellular fluid volume and thus triggers increased urinary sodium excretion; which results in further lowering the plasma sodium concentration. SIADH is best defined by the classic Bartter-Schwartz criteria:

b) Continued renal excretion of sodium

Hyponatremia (Na+<135 mmol/L) with associated hypoosmolality (<280 mOsm/kg), high urine sodium and high urine osmolality are what define SIADH. After excluding other causes of hypo-osmolar hyponatremia (hepatic/cardiac dysfunction, hypothyroidism, cortisol deficiency), then an ectopic source of ADH secretion becomes suspect. The etiology of SIADH is quite diverse, but can be categorized into the following broad categories:

SCLC, also known as oat cell carcinoma is a neuroendocrine carcinoma that exhibits aggressive behavior, displays early metastasis, is quite remarkably sensitive to chemotherapy and radiation and is associated with various paraneoplastic syndromes. These include ectopic production of ACTH, Lambert Eaton Myasthenia syndrome and cerebellar sub-acute degeneration caused by Hu, anti-neuronal antibodies (HuAb). These associated syndromes are thought to arise from secretion of peptides, cytokines or hormones from the tumor, and result in inappropriate immune system responses (Figure 3a and 3b). The correction of SIADH and severe hyponatremia must be handled with extreme care, as acute changes in osmolality significantly affect volume status of cells. The recommended rate of correction is 0.5 mEq/L/hr. The degree of hyponatremia, the patient’s symptoms and the acute VS chronic nature must be taken into consideration.

In our patient, the hyponatremia was chronic, as our patient presented with months of fatigue, weight loss and neurological manifestations. During the patient’s extensive work-up, he was found to meet the classic Bartter-Schwartz criteria, and was subsequently diagnosed with SCLC following bronchoscopic biopsy. The patient was given the chemotherapy regimen of Etoposide and Carboplatin, and within a few weeks the patient’s serum sodium levels began to normalize. However, even though the hyponatremia corrected, the patient’s clinical course slowly deteriorated because of the metastasis involving various organs. According to the current literature, hyponatremia due to SIADH is associated with a negative prognostic factor; which is in concordance with our patient. Even though the hyponatremia gradually normalized, the extent of SCLC metastasis was far to advance [3].

SCLC occurs in 15-20% of lung cancer. SIADH has been reported to occur in approximately 7%-16% of patients with SCLC. Nonetheless, approximately 70% of SIADH cases are reported to be caused by SCLC. The developer of SIADH showed no correlation with clinical stage, distribution of metastatic sites, or histologic subtype of small-cell carcinoma. However, it is reported that patients with hyponatremia due to SIADH have higher mortality rates than patients without it. The incidence and prevalence can range from rates of approximately 25% to 44% if a cut-off point of <136 mEq/L is selected, or rates of approximately 15% if a cut-off point of <130 mEq/L is selected. Thus, the potential for development of clinically significant hyponatremia early in the course of cytotoxic therapy emphasizes the need to closely monitor patients, particularly those receiving chemotherapy regimens requiring substantial intravenous hydration [4]. 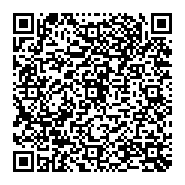