Contagious bovine pleuropneumonia (CBPP) is a highly contagious disease of ruminants caused by Mycoplasma mycoides subsp. mycoides (Mmm), with a major impact on livestock production and a potential for rapid spread. It is manifested by anorexia, fever and respiratory signs such as dyspnoea, polypnoea, cough and nasal discharges in cattle. Lesions of CBPP are generally confined to the organs of the thoracic cavity except in young calves where inflammation of the limb joints (usually the carpal and tarsal joints), sometimes seen with increased fluid. The characteristic type of lesions seen in the organs generally include; pleuritis, hypertrophy of the lymph nodes, unilateral marbling of the lungs in acute disease and sequestra formation in subacute to chronic cases. This case study report describes the presence of a well-developed sequestrum in a peri-bronchial lymph node at the trachea bifurcation in an animal artificially infected with Mmm causing CBPP. The epidemiological role such lesions play in the transmission of the disease in the field is not known. This requires further investigation to ascertain whether
such lesions are implicated in the transmission and perpetuation of disease. In addition such lesions would be missed at post-mortem in an outbreak as they are small and in unexpected organs leading to misdiagnosis of the disease.

Contagious bovine pleuropneumonia (CBPP) is a highly contagious disease of ruminants caused by Mycoplasma mycoides subsp. mycoides (Mmm), with a major impact on livestock production and a potential for rapid spread [1]. It is manifested by anorexia, fever and respiratory signs such as dyspnoea, polypnoea, cough and nasal discharges in cattle [2,3]. CBPP is endemic in many African countries, and the sub-Saharan region is under constant threat due to the carrier status of its host. The disease spread alarmingly during the 1990s, infecting several countries previously free from the disease, causing greater losses in cattle than any other diseases, including rinderpest [4]. Due to high economic losses caused by CBPP in endemic regions, OIE declared CBPP one of the most serious contagious diseases in animals and listed it in the group of notifiable animal diseases of high socioeconomic impact and is regarded as one of the major transboundary animal diseases (TADs) (OIE 2014). Factors contributing to the current were thought to include collapse in Veterinary Services [5], increased and unrestricted animal movements due to drought, war or civil conflicts, and poor vaccine efficacy [6,7]. CBPP represents a major constraint to cattle production in Africa and is regarded as the most serious infectious animal disease affecting cattle on the continent [8].

Lesions of CBPP are generally confined to the chest cavity except in young calves where inflammation of the limb joints (usually the carpal and tarsal joints), with increased fluid, is sometimes seen (FAO 2002).The severity of clinical signs observed often contrasts markedly with the extent of lesions seen at post-mortem examination; advanced lesions may be seen in older cattle showing only mild clinical signs (Figure 1). In the acute stage, many litres of serous fluid are usually present in the thoracic cavity. The fluid is clear yellow-brown and may contain pieces of fibrin. Frequently, a thick, caseous fibrinous deposit is present on the visceral and parietal pleura, which is a pathognomonic sign (FAO 2002). The disease usually affects a single lung although cases of both lungs involvement have been recorded. The affected lung develops a severe fibrinous pleuropneumonia leading to an enlarged none collapsing lung after opening of the thoracic cavity. The incised lung shows another pathognomonic sign of CBPP: interlobular septa that are distended by amber-coloured, serous fluid in and around dilated lymphatics. The fluid separates the hepatised lung lobules having different colours, varying from relatively normal to deep red or yellow grey, due to acute fibrinonecrotic pneumonia. The lungs have a marbled appearance and are oedematous.

In the chronic stage, adhesions connect the thickened visceral and parietal pleura. When the thoracic cavity is opened, pieces of lung remain stuck to the chest wall. The fluid in the thoracic cavity may have disappeared. Sequestra in the lung are characteristic lesions. They are caused by necrosis a part of the lung with subsequent encapsulation. Sequestra vary in size from 1 to 30 cm. According to Ter Laak [9], a sequestrum may remain infected for years, even after the cow has recovered clinically. The necrotic contents of a sequestrum may be liquid or firm and yellow-green to brown [10]. It is thought that a sequestrum may be drained by a bronchus and infectious material may be released into the respiratory tract and coughed out as infectious droplets leaving a cavity in the lung [3].

Hypertrophy of bronchial lymph nodes is usually observed. Additional lesions may be exudative pericarditis, exudative peritonitis, arthritis, or bursitis [11]. It has long been known that there is marked oedema of the mediastinal lymph nodes in occult types of CBPP [3]. This hypertrophy gradually recedes with the development of the disease into the chronic stages. Only the lymph node draining the area close to the site of development of the sequestra usually remains enlarged with varying degree. Other lesions often seen in other tissues include circular infarcts in the kidneys and cardiomegaly. It has been stated that generally, there are no other lesions that would be pathognomonic of CBPP apart from those that are found in the thoracic cavity [6].

This study describes the presence of a well-developed sequestrum in a peri-bronchial lymph node at the trachea bifurcation in an animal artificially infected with Mmm causing CBPP.

Hundred clinically healthy Zebu cattle, 1.5-2 years old and negative for Mmm antibodies tested by competitive Enzyme Linked Immunosorbent Assay (c-ELISA), were purchased from several herds in Namwala District, a known CBPP free area and conveyed to facilities at the Central Veterinary Research Institute (CVRI), Lusaka, Zambia. Upon arrival, the animals were ear-tagged for identification and underwent a two-month mandatory quarantine period during which they were bled twice to establish their serological status with regards to CBPP disease. The animals were also treated against internal and external parasites and vaccinated against pasteurellosis, anthrax and blackleg infection.

After 60 days of observation, they were artificially infected with Mmm field isolate (Caprivi, IZS Italy) by intra-tracheal intubation. The strain used was isolated from an active CBPP field outbreak in Caprivi area and stored at the IZS (Italy) Mycoplasma isolate bank at -80°C. Then the isolate was transferred to Lusaka Zambia where it was further processed. Mycoplasma organisms were cultured in Gourlay medium at 37°C and harvested in log phase of growth. The number of organisms was determined by micro-titration in liquid media and concentration was adjusted to 109CFU (colony forming units) in PBS buffer. While awaiting the results of the micro-titration, the organisms were kept at -80°C.

For the intra-tracheal intubation method, a lubricated 11 mm outer diameter polyethylene nasal-oesophageal tubing (bronchoscope) was inserted into the nostril of the animal and pushed gently along the nasal septum until seated firmly in a bronchus which was indicated by a cough reflex. Fifteen (15) ml of mycoplasma organisms (109) were delivered into the lung followed by 20 ml of sterile 1.5% of agar solution and then the bronchoscope rinsed using 20 ml sterile PPLO broth solution [12]. Intubated animals were kept together and checked daily for body temperature and other symptoms suggestive of CBPP disease (coughing and dyspnoea), to observe disease progression.

Animals were observed daily for signs of clinical disease including cough, nasal discharge, lethargy, respiratory distress, anorexia, weight loss and eye discharges. In addition, rectal temperatures were recorded within two-day intervals over a period of 65 days post-infection. On day 12 post intubation, the particular animal started coughing and had a nasal discharge. On day 22, the signs heightened to include lethargy and respiratory distress. The signs lasted for 10 days (Day 32 post-intubation) after which the cough became intermittent.

The animal had raised rectal temperatures of 39.8ºC for one day only on day 10 post-intubation. Sero-conversions were recorded using both Complement Fixation Test (CFT) and competition Enzyme Linked Immuno-sorbent Assay (c-ELISA) starting on day 3 post-infection until slaughter.

The animal was slaughtered on day 64 post-intubation at the end of the study. On post-mortem, the animal did not show any signs pathognomonic of CBPP in the lungs or joints. There was a mild none specific parenchyma pleuritis on the caudal lobe of the right lung. The peri-bronchial lymph nodes were observed to be of normal size. However, on palpation, there was a hard consistency of the right peribronchial lymph node of 1 cm diameter. On incision of the lesion, it was observed to have a well circumscribed area of necrosis. The lesion was bound with a well organised fibrous tissue which is typical of sequestra in a CBPP infected animal (Figure 2). 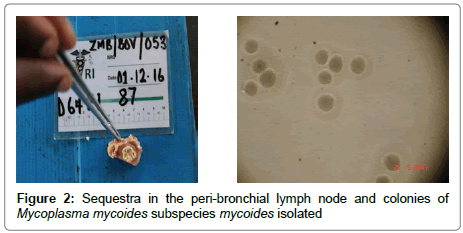 Tissue samples were collected and cultured to isolate Mmm is the causative agent for CBPP. Confirmation of the isolates was done by PCR as described in the OIE terrestrial manual (2014).

This is the first documented case of a sequestrum in the lymph node in a CBPP infected animal. This finding is unique and rare possibly an indication of a critical role of lymph nodes in the perpetuation of the disease that is usually ignored.

The isolation of bacteria from the sequestra and eventual confirmation through PCR indicates the inversion of the lymph nodes by the Mmm. This could have happened during the acute phase of the disease when there is considerable systemic circulation of Mmm [13]. The boundary of the lesion was well circumscribed by fibrous tissue to localise it. This is typical of the sequestra that are found in the lungs of chronically infected cattle (FAO 1997).

It is thought that the sequestra that are usually drained by a bronchus are usually responsible for the transmission of infection from chronically infected cattle to susceptible individuals [6]. The drainage of sequestra in the lymph node could also happen through any of the draining lymphatic vessels possibly leading to systemic bacterial circulation and eventual transmission to susceptible individuals. However, this is subject to further studies to evaluate this hypothesis.

The animal in question never showed any adverse clinical signs during the period of the study although transient pyrexia (39.8°C) of a day was recorded. In CBPP infections, not all animals that are infected will show pyrexia even if they have pathognomonic lesions at slaughter [3,12].

The particular study animal sero-converted 7 days post-infection although other animals within the study group were serologically positive earlier. This is within the timeframe expected as other studies have shown animals exhibiting similar sero-conversion patterns [8,14]. The sero-conversion could have been caused by the Mmm which was localised in the lymph node that was eliciting an immunological response in the animal [15,16]. It was stated by Thiaucourt et al. [3] that in occult cases of CBPP, Mmm is localised in mediastinal lymph nodes where it is isolated. In this case, the prolonged presence of Mmm in the lymph node must have prompted the immune system to try to localise the pathogen hence the formation of the sequestra [17,18].

Post-mortem examination of carcasses from CBPP infected regions plays a critical role in the diagnosis of the disease at the abattoir especially in eradication programmes. With such a finding, it is therefore imperative that thorough post-mortem examination of lungs and all mediastinal lymph nodes is conducted. Failure to do so will lead to erroneous conclusions that will lead to perpetuation of CBPP in endemic or outbreak areas.

The isolation and subsequent confirmation of Mycoplasma mycoides subspecies mycoides from a fibrous bound well circumscribed lesion with a necrotic centre within it, confirms that this is a sequestra that is similar to the ones that are found in the lung of cattle that are infected with CBPP. This finding confirms further the complications that surround the epidemiology of CBPP.

The authors would like to sincerely thank GALVmed for the financial assistace rendered to conduct the in vivo studies for CBPP. Gratitude is also extended to the Ministry of Fisheries and Livestock for allowing conducting of clinical trials at the Central Veterinary Research Institute (CVRI), Balmoral, Lusaka, Zambia.