An 83-year-old man with a large sacral chordoma not amenable to surgical resection presented with severe lower back and lower extremity pain refractory to opioid medications. Trial with a temporary external spinal cord stimulator (SCS) elicited a >50% relief of symptoms and a permanent SCS was subsequently placed. The patient continued to report adequate pain relief from the SCS 12 months after placement, despite continued progression of his disease.

An 83-year-old man with a history of an extensive sacral chordoma not amenable to surgical resection presented to the hospital with severe and worsening lower back and lower extremity pain refractory to maximal medical management. He also reported concomitant onset of urinary retention and lower extremity edema. He had a history significant for prostate cancer.

Exam was notable for a shuffling gait requiring a walker for ambulation. Strength was 5/5 throughout and lower extremity reflexes were 2+ bilaterally.

Imaging included a CT of the bony pelvis, which demonstrated a large sacral chordoma measuring 6.4 cm anterioposteriorly by 9.7 cm transversely by 10 cm sagittally invading the sacral foramen, extending through the right sciatic notch and displacing soft tissue structures within the posterior pelvis (Figure 1). The mass had increased in size by approximately 3 cm in the transverse dimension and to a lesser extent in other dimensions compared to a previous CT completed 12 months prior (Figure 2). Distention of the urinary bladder consistent with urinary retention was also described.

Figure 2: CT of sacral chordoma increasing in size by approximately 3 cm in the transverse dimension within 12 months of previous imaging.

Because maximal conservative management failed to control the patient’s pain, neurosurgery consultation was obtained for an external SCS trial. Application of the stimulator yielded a >50% improvement of symptoms, and the decision was made to place a permanent SCS.

The inferior spinous process and the inferior lamina of T8, as well as the ligamentum flavum, were resected and a 5-lead paddle electrode from St. Jude was placed on the dorsal aspect of the spinal dura (Figure 3). The patient was awakened intra-operatively and expressed adequate coverage of his lower back and extremity pain. The leads were tacked down to the interspinous ligament and connected to the generator placed in the subcutaneous fat tissue over the left buttock. 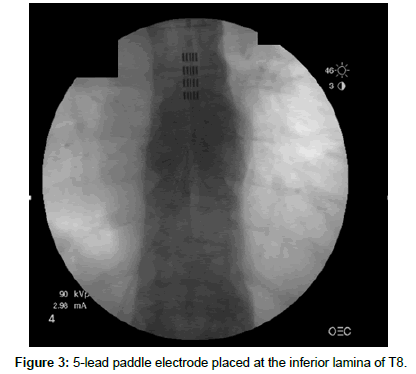 The patient’s postoperative course was unremarkable and he was discharged to home. At his two-week follow-up appointment, he reported significant improvement in his lower back pain and lower extremity symptoms with decreased opioid analgesic requirements. Over the subsequent months, he developed fecal incontinence and elected for a diverting colostomy, as well as worsening urinary retention and lower extremity and scrotal edema. He did not receive palliative chemotherapy or radiation therapy during this time. A oneyear postoperative CT scan revealed an enlarging sacral chordoma measuring 11.3 cm anterioposteriorly by 15.0 cm transversely by 11.8 cm sagittally. However, the patient continued to report adequate pain control from his SCS.

The efficacy of SCS has been well established in the treatment of the following conditions: Non-cancer neuropathic pain, including pain from failed back syndrome, ischemic limb pain, angina pectoris, peripheral neuropathies, visceral abdominal pain syndrome, chronic nonalcoholic pancreatitis, abdominal wall neuromas, and posttraumatic splenectomy, refractory to maximal conservative management. However, several studies have also demonstrated SCS efficacy in the treatment of cancer-related pain [1]. One-third of patients with cancer experience pain at the time of diagnosis, and 10- 15% report inadequate pain control with opioid medications alone or in combination with adjuvant analgesics [2-4]. In addition to the impact of intractable pain on quality of life, it often limits treatment compliance and can influence patient survival, demonstrating the importance of identifying effective pain management options for this patient population [3].

Adequate pain management in patients with sacral chordomas is very difficult to achieve. Although wide resection is the preferred management, sacrectomy frequently results in nerve damage and neuropathic pain often refractory to pharmacologic pain management and intrathecal drug delivery [5,6]. Patients with disease not amenable to surgical resection, such as the patient discussed here, also develop neuropathic pain as well as pain from local tissue invasion. A recent systematic review investigating the efficacy of SCS in management of cancer-related pain demonstrated that >80% of participants reported at least a 50% reduction of pain intensity and >50% of participants decreased their usage of opioid medications after implantation of a SCS [1].

The development of SCS was based upon the “gate-control” theory of pain, in which activation of large-diameter afferent fibers via application of an externally applied electric field can “close the gate” to pain transmission [7]. SCS stimulates the dorsal columns, which inhibits transmission through the spinothalamic tract and increases activity in the descending antinociceptive pathways [8,9]. The SCS electrode array may be placed over a spinal cord segment corresponding to the patient’s pain localization, such as over T8-9 for low back and radicular pain, to offer analgesia.

SCS is an appealing novel treatment option for patients with refractory pain from unresectable sacral chordomas. It offers satisfactory symptom relief and an increase in activities of daily living without the associated symptoms of opioid pain medications, such as lethargy or sedation. It is safe and easily reversible without requiring a weaning process and patients are able to control the level of stimulation they require based on their degree of pain [10]. Before a permanent SCS is implanted, a short trial of percutaneously placed temporary epidural leads connected to an external pulse generator is conducted. If pain is reduced by >50%, then the patient is a candidate for permanent SCS placement.

We report a patient with an extensive sacral chordoma not amenable to surgical resection who had failed maximal conservative pain management. Implantation of an SCS yielded a >50% improvement in his lower back and lower extremity pain and led to decreased opioid analgesic use. Despite his continued disease progression, he reported adequate pain control from his SCS months post-implantation. This report contributes further evidence that SCS is a safe and effective treatment option for patients with refractory cancer-related pain including pain from sacral chordomas.

Pain from unresectable sacral chordomas is difficult to manage. It has been well-established that SCS is effective in the treatment of noncancer- related neuropathic pain. This report demonstrates that SCS may also be used to effectively control pain from sacral chordomas refractory to maximal medical therapy.

We have no conflicts of interest to disclose.