Fracture of the first cervical vertebrate (C1) accounts for 2% of all spinal column injuries and 10% of cervical spine fractures [1,2] and is most frequently caused by motor vehicle accidents and falls. C1 anterior arch fracture (AAF) most likely results from the flexion force associated with axial loading [3]. Spontaneous disruption of the C1 anterior arch following C1 laminectomy is an uncommonly reported complication. We've found fourteen reported cases following interventions that include a C1 laminectomy for various pathologies. Interruption of the integrity of the posterior arch of the atlas, iatrogenically or otherwise, is thought to have increased the risk of C1 anterior arch fracture [4].

We present a rare case of spontaneous C1 anterior arch fracture following C1 laminectomy for the excision of a C1-C3 cervical spine meningioma. This is the first reported case following removal of a spinal cord tumor.

An 82-year-old, male patient with a known medical background of prostate and bladder cancer; in 2015, at age 80 the patient presented with and a C1-3 anterolateral meningioma that was revealed on CT and MRI images. The patient underwent surgery for the removal of a huge anterolateral spinal-cord meningioma. The surgery consisted of a C1-C3 laminectomy without fusion. months later he underwent right side craniotomy for resection of right temporal convexity meningioma following which he made a full recovery During follow-up in 2018, approximately 28 months following the initial surgery, the patient presented with a complaint of worsening cervical pain with increased limitation of cervical movements as well as a kyphotic posture. The patient described a choking sensation as if a collar is closing around his neck. About two hours following awakening in the morning the patient struggles to support his head which falls forward and he suffers from increasing of his neck pain. The patient also complains of radiating pain down his back upon awakening and numbness in both of his palms

On physical examination the patient shows a kyphotic neck posture, sits while supporting his head with his palm. The patient has severe pain to neck palpation flexion and rotation. There is no evidence of limb weakness or any myelopathic signs in the limbs.

The patient's current and previous imaging studies have been reviewed at the department's neuro-radiology meeting: the residual tumor showed no significant expansion. Imaging revealed however, an anterior arch fracture of the atlas, which is evident on imaging starting several months following surgery. Flexion-Extension radiographs show significant atlanto-axial instability.

The patient denied suffering any significant trauma during the time following the surgery.

The patient was offered surgery for Occiput through C3 fusion. Due to his age and frail condition the patient refused surgery and elected conservative treatment with a cervical collar and analgesics. The patient showed partial compliance to therapy with moderate improvement of his symptoms.

C1 laminectomy without fusion is a commonly practiced procedure used as part of the treatment for various pathologies involving the upper cervical spine and occipital regions (Figure 1). 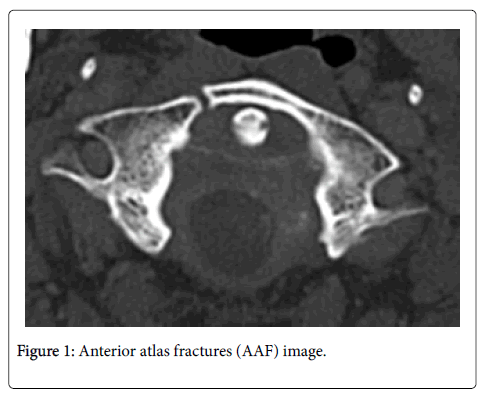 Spontaneous anterior arch fracture following C1 laminectomy is a highly infrequently reported occurrence. A review of the literature revealed only 17 reported cases which are summarized in Table 1. Anterior atlas fractures (AAF) have been reported to occurred both in males and females, elderly and pediatric patients, following surgery done for various pathologies. Most of the cases state no inciting event or severe trauma, while two cases state trivial events as falling out of a swing or cough.

In a recently published study, Shimizu et al. [5] retrospectively analyzed a series of 70 patients who underwent a C1 laminectomy. The incidence of AAF was 14.2% (10/70). Multivariate analysis revealed that a large inferior facet angle (IFA, defined as the coronal inclination angle of the C1/2 facet as measured on CT) and the presence of sub axial ankylosis (bony ankylosis below C2 on CT) were independent risk factors for AAF. There were no significant differences in the sub axial cervical balance as measured on x-ray between the AAF and non-AAF groups (P > 0.05). The discrepancy between the scarcity of reports and the relatively common occurrence found in this study should be noted. Possible explanations may be the small sample size of this study on the one hand, or that there may be a large number of occult asymptomatic cases. Additionally, in many cases of spinal canal pathology the surveillance is done by MRI images therefore the arc AAF is missed.

In a previous paper by Shimizu et al. [6], three cases of AAF following C1 laminectomy were presented with a finite element analysis. This analysis based on cervical CT scans of each of the patients. The analysis compares the stress distribution on the anterior arch and displacement of the posterior arch between intact, Laminectomy and Transverse-ligament (TL) transection +Laminectomy models in different postures. The result of this study revealed 3.55 times higher stress at maximum is concentrated in the anterior arch after C1 laminectomy, and that minimal trauma such as coughing may cause the fracture, which can be asymptomatic. Gebauer et al. described the tendency of axial force applied to the superior facet of atlas, which has inclination, to be dispersed into horizontal component expanding in the lateral direction [7]. It has been suggested that due to the discontinuity of the circular anatomy of the atlas after laminectomy this horizontal force causes greater displacement on the posterior arch and results in stress concentration and high strain in the anterior arch. The location in which maximum stress was observed in Shimizu's model correlated with the site of the actual fracture in each of the presented cases. Their model did not demonstrate a significant difference in the stress between the laminectomy and the laminectomy +TL-resected model. Considering these findings, they suggest that the TL does not provide support against the radial stress that causes the fracture. It has been suggested however that the lack of an intact TL may contribute to spinal instability and consequently to the severity of symptoms.

A variety of treatment strategies have been used (Table 1). Several of the cases were treated conservatively while others were treated surgically with different methods of fusion. One patient was treated with placement of BMP-2 and a hallow vest. While the patients treated conservatively with a neck collar did not show bony fusion they did demonstrate relief of symptoms for a significant period of follow-up. Based on the current data we would suggest that the decision regarding the treatment strategy should consider the different factors including the age of the patient, the severity of symptoms and the presence of evidence of instability.

C1 laminectomy carries the risk of developing postoperative anterior arch fracture of the atlas due to a significant increase in stress on the anterior arch following the surgery. The frequency of this complication may be higher than once thought due to many occult cases. Surgeons should take this complication into account when offering this surgery and should be minded to it during follow-up in case of increased neck pain and abnormal neck posture. Additional data is required to better define the risk factors for developing a fracture and to allow better clinical judgment regarding which patients may require fusion during initial surgery and regarding the proper treatment course following diagnosis of a fracture.