This paper presents a study of reliability of power distribution system and improvement options at Awash7 kilo substation in Ethiopia. Basically, power distribution reliability has been a major challenge in Awash7 kilo city. The existing substation has encountered frequent and long power interruptions problems. The interruptions are caused mainly by the short circuit (SC) and earth fault (EF). There are also planned outages for operation and maintenance purpose. Thus, the objective of the study is to assess the reliability of the existing distribution system and suggest solutions for reliability improvement in heuristic techniques. To limit the scope of the study, 15 kV Awash7 kilo city feeder of the substation has been chosen for the reliability improvement measures. In the study, four different mitigation scenarios have been assessed using the heuristic method to improve the system reliability. From the mitigation scenarios with the lowest SAIDI, SAIFI and Expected Energy Not Supplied (EENS) has been selected as an optimal one. The simulation results have been done with the help of Electrical Transient Analysis Program (ETAP 16.0) software. The result of this study reveals that the overall reliability of Awash7 kilo city feeder has been improved by 86%, 85.4% and 92.94% for SAIFI, SAIDI, and EENS respectively as compared with the existing system by incorporating a mitigation technology in to the network model. The economic analysis shows that the selected solution results in a cost saving of 20,229.47 USD per year from the unsold energy of one feeder only with three years payback period investment for the implementation of the reliability mitigation technology.

The electric power system is basically set up to supply electricity with little or no interruptions to its customers. Nowadays, Ethiopian Electric Utility (EEU) Power system has 400 kV, 230 kV, 132 kV primary transmission systems and 66 kV, 45 kV as sub-transmission system and 33 kV and 15 kV as a distribution system. Awash7 kilo substation receives electric power from Koka power plant at 132 kV from the interconnected system (ICS). The 132 kV transmission line is stepped dawn to 66 kV/15 kV with two parallel connected transformers as shown in Figure1. The distribution system in the city has a primary voltage of 15 kV and stepped down further to 400/220V to supply the various consumer loads [1]. The network topology of Awash7 kilo substation is radial. Awash7 kilo substation consists of five outgoing feeders. The nominal voltages of the three feeders are 15 kV and the remaining two feeders are 66 kV. As per the data found from the south-east region billing office, the south-east region has a total of 9,823 customers and out of which, 4,819 customers are living in Awash7. From the outgoing feeders, 15 kV feeder city line is serving customers found in the center of the city and is extended to Argoba Wereda and Awash Park, which are located at 35 km away from the Awash7 kilo substation. Commercial businesses like hotels, small and micro industries, banks, most administrative offices, telecommunication center, schools and a large number of residential customers get electricity from this feeder. City line is represented by L1 as depicted in Figure 1.

This part briefly deals with the methodologies used for data collection and data analysis for the existing system. Reliability analysis needs data on interruption duration, interruption frequency, a total number of customers served, customers interrupted, loads connected and so on. So, under this section, the collected failure data and basic electrical data of power system equipment which are necessary for reliability analysis are presented. These data are used to analyze the current reliability status of the substation and to distinguish the main problems of interruption. Primary data have been collected from the Ethiopia Electric Utility (EEU) of Awash7 kilo.

Table 5: Percentage average interruption duration of each type of fault

Table 6: Percentage of each type of fault in terms of interruption frequency

Table 6 shows that 41% of the interruption frequency is due the operation and maintenance, and 19% are due to a distribution temporary earth fault, 15% is due to distribution permanent short circuit, 6% is due to others (power transformer overload, transmission line fault, etc).

Table 7: Annual average energy and power consumption of each feeder [4]

Based on Table 7, the average power factor (PF) of the substation can be calculated as;

Most reliability indices are average values of a specific reliability characteristic of an entire system, operating region, or feeder. The indices for the power distribution system analysis include customeroriented indices and energy-oriented indices as defined in IEEE standard 1366-2012 [2].

1. System Average Interruption Frequency Index (SAIFI): The index represents the average number of sustained interruptions experienced by a customer in a unit time (generally one year) [2].

Where Ni is the number of interrupted customers for each interruption event, i during the reporting period, NT is the total number of customers served in the area or on the feeder.

2. System Average Interruption Duration Index (SAIDI): The index indicates the average time a customer has an interruption during a time cycle (one year) [2].

Where ri is the outage time.

3. Customer Average Interruption Duration Index (CAIDI): It is determined by dividing the sum of all customer interruption duration by the number of customers experiencing one or more interruptions over a one year period. The index is the ratio of SAIDI to SAIFI as given in Equations (2.9). It represents the average time taken to restore service to the customers [2].

5. Average Service Availability Index (ASAI): The average service availability index (ASAI) gives the fraction of time the customer has power during the reporting time. Higher ASAI values reflect higher levels of reliability. Equation (2.11) is used to calculate the value of ASAI for a given service area [2]. 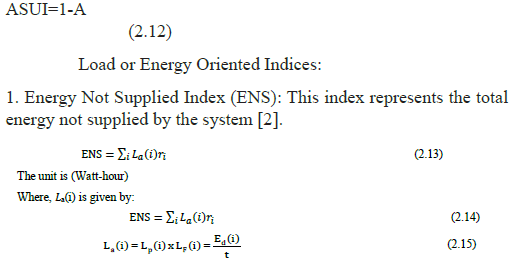 Lf(i) is the load factor and

Ed(i) is the total energy demanded in the period of interest t.

2. Average Energy is Not Supplied (AENS): This index represents the average energy not supplied by the system [2].

The utility cost for the utility during the outage is calculated as:

T he utility cost for the utility during the outage is calculated as:

Based on the data analysis, the following conclusion can be drawn.

• The power reliability of the Awash7 kilo city feeder line, L1 does not meet the requirements set by the Ethiopian Electric Agency (EEA) and the international reliability indices of other benchmarked countries.

Scenario- 1: Using one Recloser: A Recloser R1 has been placed on the major feeder (SL19) as shown in figure 2. Input quantities like power rating of the load, number of customers, feeder length, failure rate and repair rate are entered in the ETAP software as input. The interruption data of years from 2015/16 to 2017/18 G.C are used as a base year.

Table 10 is the screenshot for the simulation with one Recloser in the feeder. As can be seen from the result of the simulation, the expected number of outages per year has been reduced from 414.0 to 234.0 (43.47% reduction), the annual outage duration has been reduced from 319.7 to 229.6 hours (28.2% reduction) as compared with the existing system through the additional Recloser in the main feeder. In this case, the reliability of Awash7 city feeder is improved by 43.47%, 28.2% and 59.2% for SAIFI, SAIDI and EENS respectively. 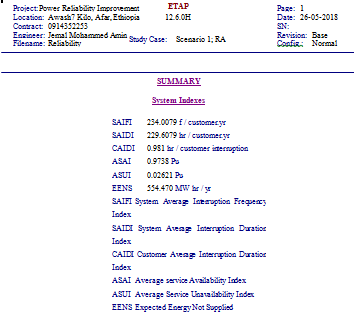 Table 11 shows the reliability improvement of using two Reclosers in the feeders. As can be seen from Table 11, the two Reclosers significantly improve the reliability of the system. The expected number of outages per year has been reduced from 414 to 187.0951 (54.81% SAIFI has been improved), and the annual outage duration has been reduced from 319.67 to 170.8294 hours (46.56% SAIDI and 69.6% EENS) has been improved as compared to base years’ average. 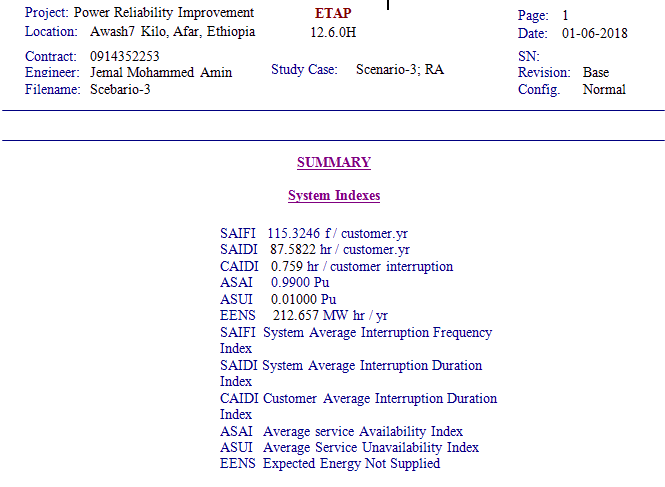 Scenario-4, Using two Recloser, Tie-Switch and Isolated Argoba Woreda line In Scenario-4, two Recloser and a normally open tie switch, that connects the diesel generator to the load during power outage are included in the model. Recloser (Rec-1) is placed at Awash7 kilo substation city feeder line side and Recloser (Rec2) is placed at the Awash7 diesel generator substation. In this scenario, as clearly shown in Figure 5, the long line running to Argoba woreda has been permanently isolated from the existing city feeder at the exit of the Awash7 kilo city. The two substation circuit breakers of Awash7 kilo substation (CB-0) and Awash7 kilo diesel substation (CB-01) and the normally open tie switch have been coordinated and interlocked together.

In scenario-4, the 15 kV power line which goes to Argoba woreda is isolated from the existing system of Awash7 city feeder line and being replaced with separate 66 kV power line. Isolating Argoba line from Awash7 city feeder line has a significant advantage on increasing the reliability of the feeder on Awash7 city. With the emergence of small villages around and increment of electricity demand, replacing the 15 kV by 66 kV may help to solve the reliability problems in the Argoba woreda. For long distances, the power transfer capability of the 66 kV power line is better than 15 KV power lines. Argoba woreda Line, which consists of currently four transformers (2 with 315 kVA and 2 with 200 kVA ratings) and covers about 15 km outside of Awash7 city, should connect to the Amibara 66 kV feeder line. The Amibara 66 KV line is one of the two outgoing 66 kV lines from Awash7 Kilo substation. Its capacity is 4.0 MW, but the actual peak load of the feeder is 2.0 MW, which is only about 50% of its capacity.

As can be seen from Table 13, the two Reclosers together with the tie switch helped to enhance significantly the reliability of the system. The expected number of outages per year per customer has been reduced from 414.0 to 58.0 (86% SAIFI has been improved), and the annual outage duration has been reduced from 319.67 to 46.68 hours (86.4% SAIDI and 92.94% EENS) have been improved as compared with the selected base years. 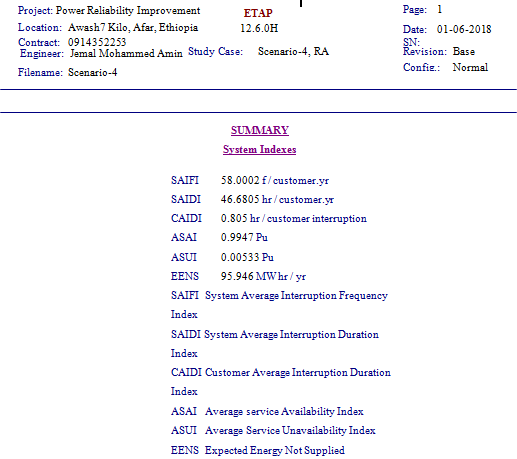 F rom Table 14, it can be concluded that from the scenarios studied, the most optimal alternative for improving the power reliability of the study area was installing two Reclosers with tie switch at critically selected locations and permanently isolating the long which goes to Argoba woreda from the Awash7 city feeder (Scenario-4). Table 15, indicate that the summary of the result of energy oriented reliability indices.

Table 14: Summary of the results of reliability improvement for all Scenarios

Table 15: Summary of the result of energy oriented reliability indices

The study clearly has shown that the reliability of Awash7 kilo city feeder does not meet the requirements set by the Ethiopia Electric Agency (EEA). The average frequency of interruptions is 414.0 interruptions per customer per year (SAIFI) and also the average duration of the interruption is 319.67 hours per customer per year (SAIDI) for the city. This shows that there is huge unsupplied energy due to planned and unplanned outages. The average unsupplied energy is 1,358.4 MWh per year. This results in a loss of around 21,766.89 USD per year due to the power outage of the distribution substation.

By implementing the reclosers and replacing the city line and Argoba line by two separate feeders (Scenario-4) the overall reliability of the Awash7 kilo city feeder is improved by 86%, 85.4% and 92.94% in terms of SAIFI, SAIDI and EENS respectively. The proposed solution has the potential to save around 20,229.47 USD per year only from the unsold energy of the city feeder. The payback period for the investment will become 3 years for the proposed technology for improve the reliability to that level.

The author’s great fully acknowledge the intake of the case study this research and the research park of Adama Science and Technology University of Ethiopia.

The authors declare that there is no conflict of interest for the publication of this article. 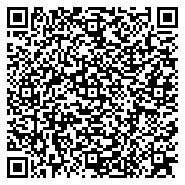