The Role of CCL18 protein in Breast Cancer Development and Progression

#These authors contributed equally to this work

CCL18 is a CC chemokine ligand 18, which is produced by Tumor-Associated Macrophages (TAMs), that can stimulate the progressiveness, angiogenesis in breast cancer, as well as the underlying pathophysiological mechanisms and it was originally discovered as pulmonary and activation-regulated chemokine (PARC), dendritic cell (DC)-chemokine 1 (DC-CK1), alternative macrophage activation associated CC chemokine-1 (AMAC-1), and macrophage inflammatory protein-4 (MIP-4). The potential functional receptor of CCL18 protein is PITPNM3 that facilitates CCL18 effect and stimulates the intracellular calcium signaling pathway. Worldwide, Breast cancer (BCa) is one of the most common malignancies among the females in both developed and also developing county. This study mainly focused on the role of CCL18 in the production of breast tumor as well as in the invasiveness of breast cancer. The data here suggest that CCL18 protein play an important role in the development of breast tumor and also progression in breast cancer. This knowledge could be helpful for the proposal of new therapeutic approaches particularly in breast cancer

The CCL18 protein is encoding a polypeptide contain 89 amino acids and a 20 peptide signaling sequence at N-terminal which is cleaved in the endoplasmic reticulum into a 69 peptide which is mature protein [1]. The mature CCL18 protein is almost similar to CCL3 (64% of identical amino acids) & CCL4 (48% of identical amino acids) and located on chromosome 17 [1], together with many other macrophage inflammatory proteins (MIPs). CCL18 protein is CC cytokine which is characterized by two adjacent cysteines, and form two disulfide bonds between Cys10-Cys34 and Cys11-Cys50, which are very much important to show to the function of this protein [2]. This protein also contains a BBXB consensus heparin binding site allowing its binding to glycosaminoglycan [3]. It has 3 exons and 2 introns and it is different from other chemokines, the CCL18 contains 2 pseudo-exons (exons which don’t appear in the final peptide) in first intron [4]. Processed CCL18 isoforms in addition to unglycosylated, intact CCL18 (1-69) was found after isolation of natural human CCL18 from various sources. Certainly, CCL18 (1-68), was copurified with CCL18 (1-69), lacking the COOH terminal Ala from human plasma [5-7]. This protein is produced mostly by antigen-presenting cells of innate immune system which include dendritic cells, monocytes and macrophages [8-10]. Not T-cells, nor B-cells are well known to produce CCL18 [8] and the production is controlled in these cells by cytokines such as IL-4, IL-10 and IL-13 that favor a T-helper 2 type cells response which are normally involved in humoral immunity or immunosuppression. CCL18 is made by fibroblasts exactly by stimulation of collagens that is very much essential in tissue healing and also repairs [10] and highly expressed in lungs, so that CCL18 plays important role in maintaining homeostasis.

The receptors for CCL18 protein are G-protein coupled receptors (GPCRs). Very recently there are three receptors that have been proposed for CCL18 protein such as PITPNM3, GPR30 (G-protein coupled receptor 30) and CCR8. PITPNM3 is only expressed on breast cancer cells and PITPNM3 –CCL18 binding induces Pyk2 and Src mediated signaling (a cancer related pathway) and succeeding metastasis of breast cancer [11,12]. Excessive production of CCL18 protein in M2 macrophages was correlated with various chronic inflammations and fibroblastic diseases such as Gaucher’s disease and rheumatoid arthritis [13,14]. CCL18 was constitutively expressed in many cancer such as in macrophages infiltrating ovarian cancer, gastric cancer and glioma [15-17]. Though M2 macrophages are most abundant in breast cancer stroma sothat CCL18 was expressed in breast cancer. CCL18 protein abundantly produced from breast TAMs and also it is released by breast TAMs which promotes the invasiveness of breast cancer [18]. As discussed about the gene structure and also the effector functions of CCL18 protein Figure 1 and Figure 2 [14]. 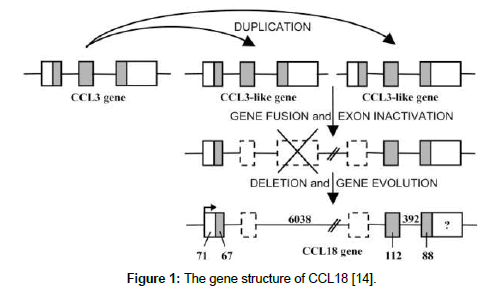 It was confirmed that CCL18 protein is correlated with breast tumor angiogenesis and also expression by immunohistochemical (IHC) staining for CCL18 expression together with anti-CCL18 antibodies and microvascular density (MVD) using anti-CD34/CD31/ von Willebrand Factor (vWF) antibodies in primary invasive ductal carcinoma samples of the breast [19]. CCL18 protein were absent in benign breast tissue but they were infrequently identified in the stroma of ductal carcinomas in situ (DCIS) of the breast, these data confirmed that CCL18 produced by TAMs correlates with the invasiveness without the growth kinetics of breast tumor cells. CCL18 enhances extracellular matrix adherence and migration of breast cancer cells [18]. CCL18 secreted by breast TAMs that reduce the miR98 and miR27b expression [20]. CCL18 was significantly associated with the invasiveness of breast carcinomas and it was high proliferative tumors determined by Ki67, on the basis of estrogen receptor status there was no difference and it was not related to the tumor size, and confirmed the correlation of CCL8 with the invasiveness of the breast cancer but not the growth kinetics of breast tumor cells [21].

It was investigated that whether CCL-18 protein is a biomarker for poor disease prognosis in the Yanan Shanxi region of China. They established that serum level of CCL-18 was higher in breast cancer patients than that of healthy women and individuals with benign tumors [22]. This result suggested that serum CCL-18 may be a biomarker for breast cancer, and may participate in tumorigenesis. They also found that serum level of CCL-18 is varied among breast cancer patients at different TNM stages; serum CCL- 18 was significantly higher in stage IV patients than stages II and III patients and elevated CCL-18 level can be used as a biomarker for advanced breast cancer [22]. Though, the role of CCL18 protein in cancer progression is controversial. Especially, it was reported that serum CCL18 protein was negatively correlated with clinical cancer stages [23]. Scientists reported that CCL18 protein was participate in immunosuppression of ovarian cancer [24,17], but in gastric cancer CCL18 was associated with prolonged survival in patients [23]. It is possible that the role of CCL18 protein varies due to different immunological mechanisms in different cancers [25]. CCL18 was significantly associated with the invasiveness of breast carcinomas and it was high proliferative tumors determined by Ki67, on the basis of estrogen receptor status there was no difference and it was not related to the tumor size, and confirmed the correlation of CCL8 with the invasiveness of the breast cancer but not the growth kinetics of breast tumor cells.

For the examination of CCL18 contributed to angiogenesis in breast cancer, it was evaluated the angiogenic effects of CCL18, which does not have a mouse homolog [26], in tumor xenografts derived from MDA-MB-231 (high metastatic potential) or BT-474 (low metastatic potential) breast cancer cells in the mammary fat pads of NOD/SCID mice. Consistent result found with in vitro and significant increase of MVD counts by 7.2-fold (p<0.001) in MDAMB- 231-derived xenografts and by 6.0-fold (p<0.001) in BT-474- derived xenografts, as compared with control mice after intratumoral injection of rCCL18 breast [19].

After intratumor injection of rCCL18 at a dosage of 0.1 mg/kg biweekly for four consecutive weeks at the same dosage, enhanced vascular invasion and penetration of BT-474 cancer cells into adjacent normal tissues. The treatment of BT-474 and MDA-MB-231 cells xenografts with rCCL18 and silencing with PITPNM3 also alleviated the promoting effect of rCCL18 on lung and liver metastases and decreased CCL18-induced reduction in mouse survival and body weight. So, CCL18 promotes invasion and metastasis of breast cancers in vivo in a PITPNM3-dependent manner [25].

The CCL18 protein is located on 17q11.2 that encodes a cytokine; it is secreted by various cells such as nucleus cells, macrophages, T cells, B cells, dendritic cells, hemopoietic progenitor cells, fibroblasts, and tumor cell. This protein acts through autocrine and paracrine signaling pathway, and it is responsible for controlling in immunologic and inflammatory processes [27]. A number studies has shown CCL18 has the capability to affect tumorigenesis and also affect the grade and prognosis of ovarian cancer, colon cancer and gastric cancer. It have been established that breast cancer cells co-cultured with carcinoma-associated fibroblast resulted in increased CCL18 secretion, which promoted the invasion and metastasis of breast cancer cells [28]. But Narita et al found that an elevated serum CCL18 levels of breast cancer patients were associated with poor prognosis of disease [29].

TAM (M2 type) and fibroblasts release a high levels of CCL18 and create a CCL18-rich microenvironment for cancer cells and its bind with PITPNM3 [25] and GPR30 receptors [30] expressed on cancer cells. This promotes the cancer cells through Snail1 stabilization, invasion, and migration [25,31]. A potential beneficial effect of CCL18 has been shown in gastric cancer where high levels of CCL18 are associated with prolonged survival of these patients that is not dependent on tumor stage [23]. However, in pancreatic ductal and lung carcinoma, CCL18 positive discrimination of epithelial mesenchymal transition which is correlated with lymph node metastasis, histopathological grade and diminished survival time [31]. CCL18 is an accurate biomarker of bladder cancer and correlates with the severity of cutaneous T-cell lymphoma and with breast cancer metastasis [25].

In conclusion the role of CCL18 is an important TAM-derived cytokine in promoting breast cancer metastasis and also it has shown the tumor angiogenesis in breast cancer. There are many others TAMderived chemokines [32-35] also give expression via another signaling pathway because of complete inhibition of CCL18 did not completely hunk or inhibit breast cancer metastasis by TAMs. So, more studies are necessary to elucidate whether the cytokines released by TAMs can be influence to inhibit the breast tumour progression.

The authors declare that there is no conflict of interest.