Topography and Depth Influences on Soil Nitrogen and Carbon Sequestration

Topography is one of the important factors affecting soil carbon accumulation in a tropical ecosystem. Slope effects vary in magnitude in different agro-ecosystems. The study was conducted to evaluate the influence of topography on soil nitrogen and carbon equestration in Mbano Imo State, Nigeria. Three profile pits were dug along a landscape of approximately 200 meters, one on each topographic position. Each profile pit was demarcated into 4 equal depths of 30 cm apart and 3 replicated soil samples were collected from each of the depths for laboratory analyses. Analysis of variance and correlation analysis were used for data analysis. From the results, the average bulk densities and moisture content varied between 1.36-1.59 g cm-3 and 6.43-7.27% with the footslope (valley position) containing significantly (p=0.05) higher values. 0-30 cm depth had the least bulk density value compared to other depths. At 0-30, 30-60, 60-90 and 90-120 depths, carbon and nitrogen sequestration varied depending on the landscape position. At the depth of 0-30 cm in upslope (summit), mid-slope and footslope, organic carbon, total nitrogen, carbon and nitrogen sequestration were the highest (p=0.05). 30-60 cm depth of the footslope sequestered significantly higher carbon (520.30) than that of the summit (376.74 g cm-2) and mid slope (26.64) (p=0.05). Considering the three different topographic units, the footslope sequestered significantly (p=0.05) highest quantities of carbon (629.42 g cm-2) and nitrogen (33.18 g Nm-2) than the up slope (249.36 g cm-2, 23.39 g Nm-2) and mid slope (170.72 g cm-2, 14.80 g cm-2). Also, organic carbon and total nitrogen were highest in the foot slope compared to the mid and up slopes. Generally, ANOVA result revealed higher availability and sequestration of carbon and nitrogen at 0-30 cm depth and valley position.

Important factors that control soil carbon levels include topography, climate, hydrology, biological activity, vegetation patterns and land use [1]. However, even within the same ecosystem, soil carbon and nitrogen sequestration potentials differ in response to many other factors such as slope position (topography), management practices and climatic conditions. Soil organic carbon reacts quickly to anthropogenic activities such as environmental degradation, biomass burning, deforestation and land use changes; and rapid decline in carbon and nitrogen contents of arable soils globally due to these activities has brought about a renewed focus on soil carbon and nitrogen sequestration studies.

Topography influences soil nitrogen and carbon through erosion and redistribution of soil materials through leaching, infiltration and runoff potentials [2,3]. However, the effects of topography on soil carbon are likely to vary in magnitude under agricultural systems with different management practices [2] and soil depth. Soil depth controls soil nitrogen and carbon dynamics by bioturbation, placement of plant and animal residues on the surface of the soil and/or incorporation of organic materials within the epipedon and endopedon of soil.

Soil is an important carbon pool and the most vital component of the biosphere [4]. Soils are regarded as the largest carbon pools of the earth carbon cycle and contained about thrice more carbon than the vegetation. Globally, the topsoil (0-30 cm depth of soil) contains about 1500 pg of carbon and this fraction of carbon is lost annually through soil erosion and other human activities. However, the quantity of CO2 in the atmosphere increases steadily due to man activities that encourage carbon emissions.

The knowledge of the impact of topography on soil carbon stocks regionally and globally is imperative because, this stock is not only two times the total amount of CO2-C in the atmosphere, but it is also easily upset by slope factors and agricultural activities taking place on the soil surface (top soil). More so, restoration and maintenance of soil health through soil carbon and nitrogen management has remained a major challenge for tropical soils. To make this successful, the comprehensive knowledge of the sequestration of carbon and nitrogen in the tropical soils should form an essential pre-requisite in future land resource management programs. Therefore, this study investigated the effects of topography and soil depth on carbon and nitrogen sequestration.

The research was carried out at Isiala Mbano, (50 39N, 70 13E) in 2018. According to climatic information obtained from the Nigerian Meteorological Unit, the area receives about 2000 mm average rainfall, 26°C mean annual temperature and approximately 80% relative humidity [5]. Benin formation (the coastal plain sand) is the lithological material from which the soils of Isiala Mbano are derived from [6]. These soils are highly weathered, strongly acid, and coarsetextured and generally low in fertility [6]. Isiala Mbano is rainforest vegetation covered with a lot of shrubs, grasses and trees such as oil and raffia palm trees, oil bean trees, elephant grasses, orchids, rubber, strangler figs, pitcher plants, which capture atmospheric carbon via photosynthesis. The topography of the studied site is a rolling landscape with typical hill slope of about 200 meters.

Site selection was done randomly to represent the range of toposequences present in the area. The topographic (terrain) attribute considered was the slope steepness, consisting of the 0.5-1% (summit or upslope), 9-10% (mid-slope) and ≥ 40% (footslope or valley position). A soil profile was dug and sampled in each of the three different slope positions with the same environmental conditions and at different depths of 0-30, 30-60, 60-90 and 90-120 cm respectively in August 2018. A total of 36 samples (3 profile pits × 4 sampling depths × 3 samples per depth) together with 36 undisturbed soil samples using core sampler for the evaluation of soil bulk density were collected. Soil samples were air dried at room temperature, crushed, sieved and analyzed in the laboratory. Hydrometer method was used in Soil particle fraction determination [7]. Core method described by Grossman and Reinsch [8] was used for bulk density determination while the gravimetric method was used for the determination of soil moisture content. Soil reaction was determined using 1:2.5 soil: water ratio [9]. Available P was extracted using Bray-P 2 solution [10]. Exchangeable bases were determined by the neutral ammonium acetate (NH4OAc of pH 7) procedure [9]. Total Exchangeable Acidity (TEA) was determined by the procedure [11]. Wet digestion method was used [12] for organic carbon determination while total nitrogen was determined by Kjeldahl digestion method [13]. Carbon sequestration (g Cm-2) was calculated using the method of [14]: (BD (g Cm-3) × OC (g kg-1) × depth cm) while Nitrogen sequestration (gNm-2) was calculated using the method [15]: (BD (g Cm-3) × TN (g kg-1) × depth) where, BD=Bulk Density, OC=Organic Carbon and TN=Total Nitrogen.

Analysis of variance (ANOVA) was used to test differences in soil properties, soil carbon and nitrogen sequestration across soils of different slope positions and depths. For statistically different parameters (p=0.05), means were separated using the Least Significant Difference (LSD). Correlation analysis was conducted to check the relationships among soil variables.

The slope and depth influences on soil properties are shown in Figures 1-3 and Table 1. Soils of the upslope had more of sandy texture while the textures of the mid and footslopes varied between sandy loam and sandy clay loam respectively. Across all sites, soil depth affected the movement of clay, with the 60-90, 90-120 cm depths containing significantly (p=0.05) higher clay than the other depths (Table 1). At the summit and mid slope, the clay content of 0-30 cm differed significantly from 30-60 cm depth. Increased clay with depth had been reported [16]. The clay contents of the different slope positions differed significantly (p=0.05) from each other (Figure 1). The mean bulk density and gravimetric moisture content differed significantly (p=0.05) from each other. Soil pH ranged between 4.87 and 5.22. Across sites, soil reaction and total exchangeable acidity were affected by slope position at 5% level of confidence. Statistically, the valley position contained the highest total nitrogen (0.12 g kg-1), gravimetric moisture (7.61) and organic carbon (1.33 g kg-1). 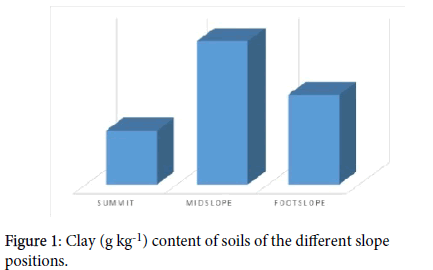 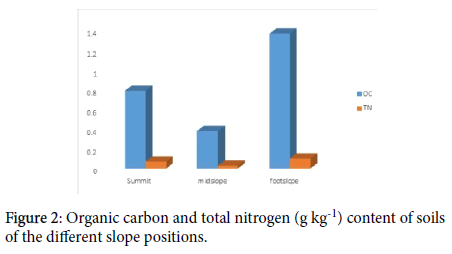 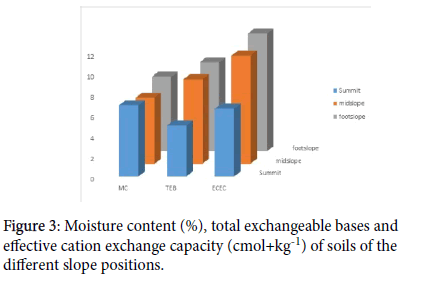 Based on the data analysis results, organic carbon and total nitrogen contents of the soils were significantly (p=0.05) affected by depth and slope position. The 0-30 cm depth had significantly higher organic carbon and total nitrogen than the other soil depths. The high moisture content of the toe slope may be a consequence of water flow from the summit to the lower position governed by the topographic position, resulting in higher moisture availability at the toe slope [17]. However, soil properties such as available phosphorus showed no significant difference across the slopes and soil depths. The mean TEB and ECEC of the soils ranged from 4.95-8.66 and 6.59-11.46 cmol+kg-1. From statistical results, the mid and foot slopes had significant higher (p=0.05) total exchangeable bases and ECEC than the summit (Figure 3). C/N ratio of the valley slope differed significantly from the other slope positions. 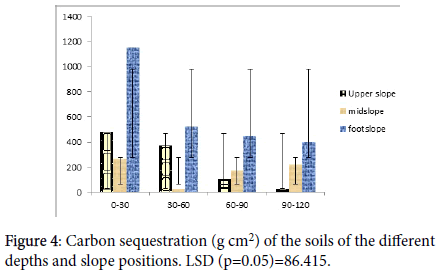 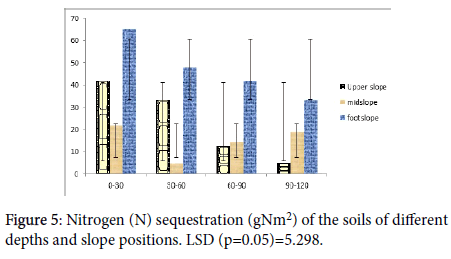 High accumulation of carbon at the foot slope could be a consequence of the deposition of organic materials from the upper part of the slope to the valley position by running water. From field observation, the foot slope was densely populated with vegetation than the mid and up slope. The differences in carbon and nitrogen stocks of the soils of the three slope positions are appreciable and may be linked to the heterogeneity of vegetative cover, slope steepness and agronomic activities. The lower carbon and nitrogen sequestered at the summit and mid slope has been reported [21], and could be a consequence of soil conditions that favour rapid decomposition at the valley. At valley positions, carbon accumulation and burial lead to greater soil carbon sequestration and protection of soil organic carbon from further decomposition [22-25]. Some researchers also reported that, at valley positions, the soil carbon that accumulates is not necessarily stabilized on the mineral surfaces; rather, greater carbon stocks at valley positions could be simply protected from microbial decomposition through burial [26,27]. 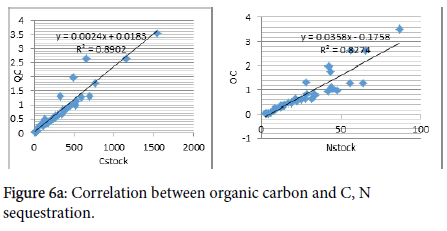 Figure 6a: Correlation between organic carbon and C, N sequestration.

Figure 6b: Correlation between bulk density and C, N sequestration. 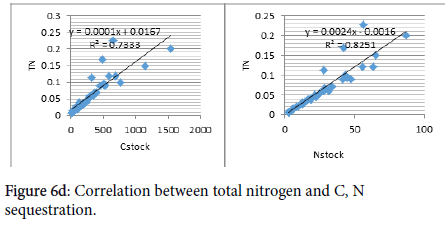