Background: Approximately two million ankle sprains occur in the United States annually. Lateral ankle sprains (LAS) account for 85% of all ankle sprains, 74% of those individuals report continued symptoms following the initial insult. Persistent pain and instability following ankle sprain is indicative of chronic ankle instability (CAI). There are many interventions to address hypofunctioning muscle including electrical stimulation (ES) and it is known that peripheral ES changes muscle behavior. The purpose of this pilot study was to investigate the effect of electrical stimulation of the peroneal muscles combined with 3 exercises for the treatment of CAI.
Methods: Two participants with CAI were recruited for this repeated single case design. The Cumberland Ankle Instability Tool (CAIT), the modified Star Excursion Balance Test (mSEBT), and center of pressure (CoP) was measured. A single limb hop to stabilization protocol and single limb stance activities were combined with manual triggered electrical stimulation for six sessions.
Results: Improvements in CAIT scores for both patients were observed. There was no statistically significant change in mSEBT scores. Center of Pressure measurement improvements varied between subjects. For subject 1, there was no significant change in CoP in eyes open and eyes closed conditions. For subject 2, there was a significant change in the anterior/posterior CoP data points in both conditions.
Discussion: In individuals with CAI, the addition of electrical stimulation to a single limb stance and hop stabilization protocol for hypofunctioning peroneal muscles led to positive CAI outcomes as measured by improved CAIT scores and improved CoP measurement in one subject.

Functional ankle instability includes impairments in ankle proprioception, cutaneous sensation, nerve-conduction velocity, neuromuscular response times, postural control, and strength [15]. These impairments are associated with altered anticipatory and reactive neurological feedback loops due to damaged mechanoreceptors and muscle spindles [16]. Damaged mechanoreceptors in addition to muscle inhibition or hypofunction, result in incorrect proprioceptive information that can cause further instability at the ankle due to altered alpha and gamma motor neuron firing [17-19]. The hypofunction, may prevent the injured ankle from affectively activating its dynamic lateral ankle stabilizers (peroneals) to appropriately stabilize the ankle during function and sport.

Measures that examine dynamic balance and postural control deficits associated with CAI include, the SEBT (Star Excursion Balance Test), CoP (center of pressure) measures and most recently, wobble board performance changes [20-22]. The research on the SEBT indicates deficits in limb reach during dynamic balance, in CAI subjects compared to non-injured limbs [20]. Center of pressure velocity measures also indicates changes in the mediolateral and anteroposterior direction for CAI subjects [21]. Most recently, computerized wobble board testing in a study by Fusco et al., showed that it may be capable of detecting balance impairment in subject with unilateral CAI [22].

In the absence of external lateral ankle support an intervention to address the hypofunctioning peroneal muscle is the key to successful rehabilitation for CAI, regardless of the measure used because of its contribution to the underlying chronic pathology [23]. The treatment of CAI must give attention to the mechanism of hypofunctioning. To date, treatment for CAI has proven inconsistent in duration, intervention protocol and outcome [24].

Electrical stimulation (ES) has been used for acute LAS to address function, edema, and pain with inconclusive results [25]. Only one study was found that evaluated the effect of ES on CAI [26]. This study showed an improvement in CoP excursion after using sensory level ES to increase postural control following a drop landing.

Although there is support for combined ES and exercise [27], the underlying physiological mechanism and specific protocols are not always clearly understood. Electrical stimulation effects include central nervous system (CNS) and peripheral nervous system (PNS) mechanisms and these effects maybe optimal when applied to the decreased activity in neurologic pathways following injury. This decreased activity reduces the excitability of CNS circuits and weakens pathways between the brain and muscle [25] which likely perpetuates a hypofunctioning muscle following injury. However, increases in CNS activity via ES, may restores the correct muscle recruitment timing of these pathway functions [10,27-29].

There is also virtually no research showing the effects of a combined balance program with triggered ES to address neurological deficits related to hypofunctioning peroneal muscles [11,12]. The purpose of this pilot study was to investigate the effect of electrical stimulation of the peroneal muscles combined with 3 exercises in the treatment of CAI.

Two participants were recruited for this repeated single case design and informed consent was give as part of the IRB process. One male, 24 years of age and one female, 25 years of age; both of average height and normal BMI. The male subject had a history of 3 significant ankle sprains while playing football to the tested side. The female subject had a history of multiple bilateral sprains during her time as a competitive soccer player. Both subjects had full anatomical ROM with greater ligamentous laxity noted on the tested side. Neither subject sought formal medical treatment of their sprains. Most importantly, both subjects met the selection criteria for patients with CAI as per the International Ankle Consortium position statement (Appendix 1) which includes instability scores on the CAIT and FAI (for the full positions statement criterial, which was used in this study the reader is encouraged to reference the detailed statement published in the Journal of Orthopedic and Sports Physical Therapy) [25]. Exclusion criteria were based on self-reported information. Participants were excluded if they had contraindication to electrical stimulation, an abnormal nervous system, or acute illness.

Participants completed the CAIT and performed the mSEBT [6,13,30,31]. A maximum of six attempts per reach direction were averaged and used to calculate normalized mSEBT scores. Center of pressure was measured with a Kistler force plate (Type 9260AA, Kistler Instruments Inc., Amherst, NY). The methods to obtain this data were similar to Mettler et al. [32]. The force plate data was sampled at 200 Hz and filtered at 6 Hz using a Butterworth low-pass filter. The protocol used was similar to one described by McKeon et al. [33] involving single-limb hops to stabilization and single-limb stance activities.

In addition to the exercise protocol, the participants received manual triggered electrical stimulation. A biphasic pulsatile current was used with parameters that included a pulse width of 250 usec, and a frequency of 25 pps, and the intensity was adjusted to give a visible muscle contraction producing ankle eversion (14-25 mA). During the dynamic exercises the electrical stimulation was triggered immediately before take-off from start position and maintained until the subject returned to start position and then released.

The protocol included single leg hop with 10 repetitions each, anterior/posterior (AP) and lateral/medial (LM) and anteromedial/ posterolateral directions. Single limb stance (SLS) with 3 repetitions each with the following progression: eyes closed arms out on noncompliant surface, progressing from 30 to 90 seconds and then potential progression to foam and foam with ball toss. The last progression included SLS eyes closed with arms across the chest for 30 seconds on compliant surface up to 90 seconds (protocol adapted from McKeon et al., see Appendix 2) [33]. 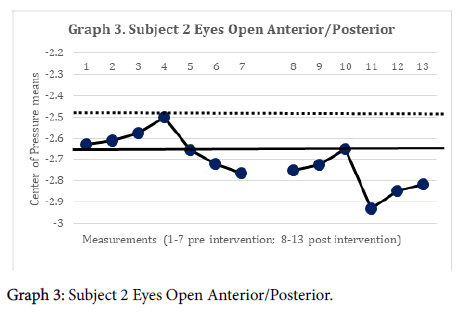 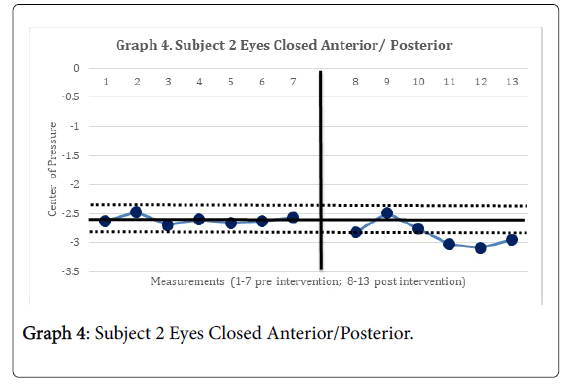 The subject’s significant improvement in CAIT scores suggests improvement in the perceived instability. Subject 2 demonstrated a significant increase in CoP mean amplitude in the AP directions and greater deviations in all four directions with increases in sway. This may indicate the emergence of new strategies in order to maintain postural control [14]. This finding is consistent with Sefton et al., [34] who found greater variability in static balance CoP measures following 6 weeks of balance training.

There were no significant changes in mSEBT measurements for either subject. This may be due to a number of factors. The first of which is that the time of day influences on dynamic postural control measurements [35]. These measurements tend to improve in the morning when compared to late afternoon or evening [35]. In this study, measurements were taken when the subjects had availability, which varied throughout the day [35]. Additionally the choice of exercise may have negatively impacted mSEBT measurements because they were more static in nature. The addition of dynamic balance exercise would be recommended as a protocol modification. The addition of a HEP would be recommended because it has been used in previous studies successfully to reinforce movement learning in the hypofunctioning muscle [36].

Arthrogenic muscle inhibition, which is present in individuals with CAI [37], with marked decreases in alpha motor neuron excitability, contributes to hypofuncting muscle, (in this case, of the peroneus longus). Because of this inhibition/hypofunction, [6,7,37] the addition of ES in these subjects, may be what lead to positive CAI outcomes. Electrical stimulation increases the excitability of the motor neuron pools observed in the peroneus longus and increases the effectiveness of the altered descending corticospinal pathways, which is something that the patient cannot do voluntarily, without the electrical cueing [8].