Tropical Diabetic Hand Syndrome: A Case Report with an Overview of Literature

Background: Hand infections amongst patients living with diabetes are common in the tropical region and remain a major cause of morbidity and mortality. Tropical diabetic hand syndrome is the term that has been coined for diabetic hand infections that commonly occur in the tropics. This syndrome is not known to many physicians especially in sub-Saharan Africa and consequently it is overlooked and underreported. This indexed case is reported to create more awareness on the existence of tropical diabetic hand syndrome.

Case presentation: We report the case of 57 year-old black African driver, newly diagnosed with type 2 diabetes mellitus after he presented with a life threatening infection of the right hand for which a diagnosis of Lawal Group 3 right diabetic hand syndrome was made which eventually led to amputation of the right thumb.

Hand infections have been reported in patients living with diabetes, causing significant morbidity from amputation and functional disability or mortality from sepsis [1-3] Tropical diabetic hand syndrome (TDHS) is the term that has been coined for these diabetic hand infections because it occurs commonly in the tropics [1,3,4]. This syndrome comprises a complex pattern of hand infection that ranges from cellulitis to swelling and ulceration of the hand, which can progress to more fulminant infections such as gangrene or necrotizing fasciitis [1,2]. Factors that lead to hand infections amongst patients living with diabetes include systemic sclerosis, trauma, connective tissue disorders, vasculitic disorders and myeloproliferative disorders [5]. Unrecognized trivial trauma remains the most common predisposing factor in the tropics [1]. Early surgical intervention, proper glycaemic control, elevation of the affected hand and early initiation of broad spectrum antibiotics are essential for the rapid healing of diabetic hand infections [1,6]. Although TDHS is a major cause of morbidity and mortality amongst diabetic patients in the tropics, many physicians are less aware of the frequent occurrence [2,3,7]. This case report emphasizes on the frequent occurrence of this fatal hand sepsis amongst diabetic patients in the tropical region.

A 57 year-old male black African driver presented at our centre with a gradual onset painful and progressive swelling of the right thumb of 2 weeks duration which later became ulcerated and gangrenous, all in a febrile context. This started following a trivial trauma which was initially managed as whitlow with cloxacillin and diclofenac and daily dressing as an outpatient following the first consultation in our service. This infection progressed from the tip of the thumb to involve the entire digit and later became gangrenous despite initial management. The patient had no prior history of diabetes or hypertension and did not smoke or drink alcoholic beverages.

Physical examination upon presentation revealed a temperature of 38.4ºC, a pulse of 124 beats/minute, blood pressure of 150/80mm/ Hg, and a respiratory rate of 24 breaths/minute. The entire right finger was gangrenous with suppurating ulcers right to the base (Figure 1). The rest of physical examination was unremarkable. 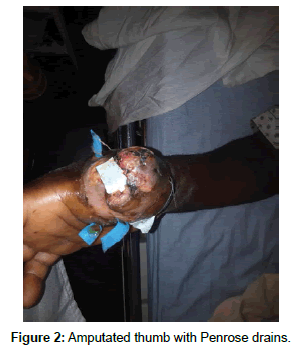 The diabetic hand is a less commonly recognized entity when compared to the diabetic foot related infections [1]. Diabetic hand infections are easily ignored and underestimated resulting in increased morbidity and mortality [1,2]. Recent studies indicate that diabetic hand infections are not as rare as they are diagnosed and reported in the tropical region especially in sub-Saharan Africa [6,7]. The frequent occurrence of TDHS warrants the need to increase its awareness amongst physicians, as early diagnosis and prompt intervention will result in better outcome [1,2]. Despite the early presentation of our patient, TDHS was not promptly diagnosed partly because he had no previous history of diabetes and probably due to lack of awareness on TDHS by the attending physician.

Management of TDHS remains challenging mainly due to late diagnosis, coupled with the lack of existing guidelines and protocols for the management of this disease entity. Nthumba et al. in a study set out to establish a protocol for the holistic management of TDHS to improve digit/hand salvage and function in their centre concluded that TDHS appears to be more aggressive in some patients than in others and a multidisciplinary approach, with early involvement of the surgical team, and a radical surgical debridement are essential to improve outcomes [8]. Although the goal of medical treatment (i.e. glycaemic control) is simple and easily achieved, surgical goals (salvage of limb or life, preservation of hand function) are more complex, costly, and difficult to achieve [8]. Educating health care workers, diabetic patients, and their relatives on hand care is an important preventive measure. Diligence in taking anti-diabetic medications, early presentation, and appropriate care of TDHS are required for meaningful improvement in outcomes of patients with diabetes who develop hand sepsis in the tropics [8].

Diabetic hand sepsis seen today in tropical countries is a reflection of a problem which previously also occurred among people with diabetes in the developed countries [4]. The reduction in its occurrence in the Western regions is probably due to increase awareness of diabetes and its complications, improved glycaemic control amongst diabetic patients and access to expert care [4]. Good health facilities that carry out educative programs on the prevention and control of diabetes and its complication are largely absent in sub-Saharan Africa in particular and the tropical region at large. Consequently, most patients remain unaware of their glycaemic status and diabetic patients are ignorant of complications. Government policies are needed to create more day care diabetic clinics that focus more on the prevention than management of diabetic complications.

Education of diabetic patients and health staff regarding proper hand care, nutrition and the importance of immediate medical consultation following hand trauma or even after unexplained redness and swelling of hand in diabetic patients will go a long way to reduce the incidence of TDHS [3,7]. Prevention of permanent disability and death due to TDHS will require early recognition by patients and medical practitioners, improved management of glycaemic levels in resource-limited countries, and surgical intervention during less severe stages of the condition [7].

Although tropical diabetic hand syndrome is associated with a high morbidity and mortality, its occurrence has been overlooked and consequently underreported by many physicians in sub-Saharan Africa. Education of diabetic patients on hand care and appropriate glycaemic control is a cost-effective and easier way to prevent TDHS.

Written informed consent was obtained from the patient for publication of this case report. A copy of the written consent is available for review by the Editor-in-Chief of this journal.

The authors wish to acknowledge the entire surgical team for the great work they did in managing this patient.