Purpose: The aim of this work is a retrospective evaluation of axillary lymph node core biopsy, evaluation of safety of this biopsy method, and its contribution to the diagnosis and staging of breast cancer.

Results: Out of the total number of axillary node biopsies, 148 biopsies were performed in patients associated with breast cancer. In these patients, metastasis of breast cancer was found in 124 cases, with the remainder having benign changes in the lymph nodes. The group included 16 patients with no history of breast cancer. No post-biopsy complications were reported in any of the cases.

Conclusion: Core biopsy of axillary lymph nodes is safe procedure and should be used routinely to diagnose metastases. The introduction of the core biopsy to the routine practice can contribute to the implementation of targeted axillary dissection.

Breast cancer staging involves sonographic evaluation of the axillary nodes [1-9]. According to the findings, the ultrasound examination is evaluated as normal, suspicious, or clearly pathological. All clearly pathological nodes are not necessarily verified by biopsy [5]. 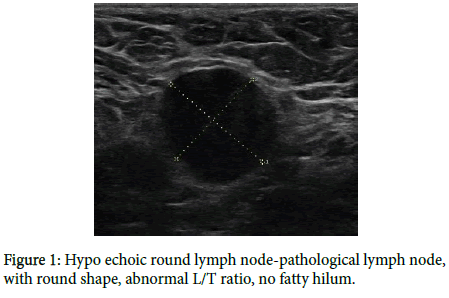 A clearly pathological lymph node is enlarged, hypo echoic, with no fatty hilum, and with peripheral vascularization (Figures 1-4) on an ultrasound image [1-4,8-11]. 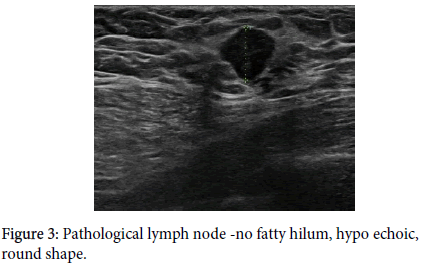 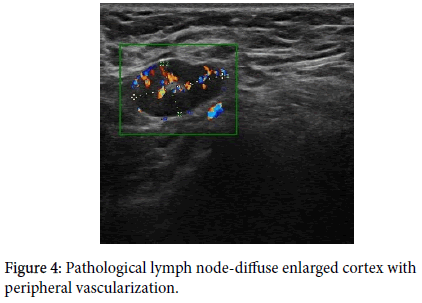 However, these clearly pathological lymph nodes must be differentiated from those that are not yet so morphologically altered, thus presenting a greater diagnostic challenge. The ultrasound image could be considered as suspicious and must always be followed by histological verification of these nodes. Minimal morphological changes may not correlate with metastasis [4,12].

There are two ways to verify histological changes in the nodes. Fine needle aspiration is reported in the literature [6,12,13], but due to its lower sensitivity, we use core biopsy only. At our Department, we use fine needle aspiration to diagnose metastases in axillary lymph nodes only in at-risk cases. This risk of per procedural bleeding can usually be eliminated by using Doppler imaging of the vascular structures [5], the patient’s position, and the choice of an appropriate access pathway [2,3,12].

In our study, axillary node biopsy was always guided by ultrasound navigation using the so-called “free-hand” technique. Under sterile conditions, after covering with a sterile drape and disinfecting the injection site, about 2 ml of local anesthetic (1% Marcaine) were applied to the skin and to the site of biopsy. A small incision was performed on the skin with a small scalpel. We used a biopsy gun with a needle diameter of 12 or 14 G for core biopsy. The needle was inserted close to the lymph node under sonographic guidance. Next, one to three samples 22 or 15 mm in length were taken. One sample is sufficient if it is representative and the radiologist is sure that it has been taken from a suspicious part of the lymph node. The data were subsequently evaluated using pivot tables in MS Excel.

Axillary node features, metastasis, and other histological findings were evaluated, as was the safety of the core biopsy by counting the number of complications after this procedure.

Out of the total number of axillary node core biopsies, 148 biopsies were performed in breast cancer patients. In these cases, metastasis of breast cancer was found in 124 cases, follicular nodular hyperplasia in 10 cases, histiocytosis in 5 cases, node fibrosis in 1 case, and in 8 cases normal nodal structures with no histological changes were found (Table 1). In two patients, core biopsy ruled out metastases which were then confirmed by surgical sentinel node biopsy (Table 2). This correlates with the low false negativity described in the literature and in our study it was 1.6%. Sensitivity of this biopsy method in our study for metastasis of breast cancer was 98.4%.

We performed 16 biopsies in patients with no history of breast cancer and without newly diagnosed breast cancer. In these cases, indication for core biopsy was based on the presence of a palpable enlargement of an axillary lymph node and its suspicious appearance on ultrasound imaging, or these patients had PET/CT in another indication and there was a suspicious lymph node in the axilla; or it was a patient with lymph node syndrome and biopsy was performed to exclude hemato-oncological malignancy and there were some reasons not to perform whole node extirpation. Among these patients, lymphoma was confirmed in 5 cases. These were patients who needed confirmation or exclusion of diagnosis of a hemato-oncological malignancy and they were not able to undergo surgical extirpation of the whole node. In 4 patients, follicular hyperplasia was found; in 2 cases metastasis of a primary tumor other than breast cancer was found; in 2 cases there were changes in the type of sarcoid granuloma; in one case fibrosis was present; in 1 there was histiocytosis; and in one case a normal node with no other histological features was present (Table 1).

This suggests a low false negative rate of axillary lymph node core biopsy. Patients without breast cancer history with benign axillary node biopsy were followed up; in one of them, lymphoma was confirmed by surgical extirpation of the whole lymph node – this could point to the false negative rate of axillary lymph node core biopsy in this indication to exclude hemato-oncological malignancy (but in this study, there was a very small sample of population in this indication). Sarcoidosis was confirmed in one patient with sarcoid granuloma in histological feature. A second patient with this histological finding of sarcoid granuloma was referred to her general practitioner for further examination, but we have no further information about her. In the other patients with benign axillary lymph node biopsy after 6 and 12 months, follow-up ultrasound was performed and there was a stationary image or regression of morphological changes in the axillary lymph nodes.

No complications were seen in any of the cases, and manual compression for 5 minutes was performed in all patients as a prevention of hemorrhage. If minor bleeding occurred, we used manual compression for 5 to 10 minutes with respect to the severity of the bleeding. The patients were under supervision for another 15 to 30 minutes after the procedure, with none reporting any complications during that time. Only one patient had a small hematoma – its size was about 15 mm. No post biopsy complications were recorded long time after the procedure and no patients reported local pain after biopsy.

Axillary node staging is an important prognostic factor in the diagnosis of breast cancer as well as one of the crucial factors in determining the type of primary therapy [2,4,8,9,12]. Axillary ultrasonography plays an important role in this staging.

Axillary lymph nodes have a precisely described image on ultrasound. A benign node has an oval shape, an L/T ratio greater than 2, it has a preserved hyper echoic fatty hilum [1-3,8,9,10,12], its cortex is thin and regular, and there is polar type of vascularization (from the hilum). A clearly pathological lymph node is enlarged, hypo echoic, with no fatty hilum, and with peripheral vascularization (Figures 1-5) on an ultrasound image [1,3,4,8-11]. In the case of so-called “reactive nodes” of benign origin, the sonographic appearance may be different. These nodes may have an irregularly distributed cortex (Figure 6), sometimes with focal thickening or with cortical bulge (Figures 7-10), or inhomogeneity in an otherwise hypo echoic cortex [1,2,9,12-14], but usually the fatty hilum and the polar type of vascularization remain. The node may be small but round and hypo echoic, and the L/T ratio is abnormal (Figure 11). If found in patients without breast cancer and if side-symmetrical, these nodes are usually not considered suspicious. Another situation occurs when the finding of a node with an irregularly distributed cortex or with a cortical bulge is one-sided and there is an already known cancer diagnosis in the ipsilateral breast. These signs should be viewed in correlation with the contralateral axilla, including aggressiveness and size of the breast tumor. In this case, it also depends on the experience of the investigating radiologist whether or not he or she will evaluate the node as suspicious and order biopsy. Sometimes, a hyper echoic rim around the node (Figure 12) that corresponds to edema [9,12] may be a clue to performing biopsy. Biopsy should be indicated if the nodes are pathological, have a cortex wider than 4 mm, the hilum is diminished or the nodes are round and their L/T ratio is less than 2 (Figure 11). In some cases of breast cancer and clearly pathological nodes in the ipsilateral axilla, we leave the decision whether or not to perform node biopsy up to the oncologist. For instance, in cases where distant metastases of breast cancer have been confirmed and primary breast cancer has been confirmed locally, it is not necessary to verify pathological nodes in the ipsilateral axilla. 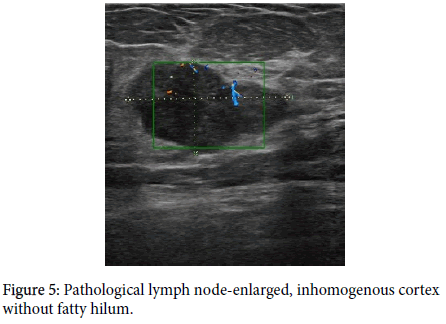 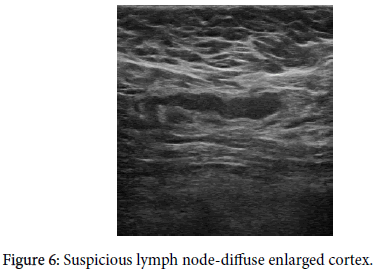 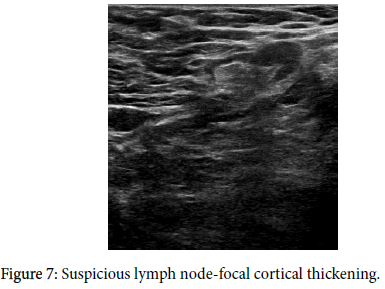 Moreover, ultrasound-guided axillary lymph node core biopsy is a very safe method [2,3,5,6,8,12]. If we choose an appropriate access pathway, which may be influenced by the patient’s position and use Doppler imaging to differentiate vessels, we can perform this biopsy without any bleeding complications. Indeed, we did not notice any serious bleeding or infectious complications in our study.

Other indications for this biopsy method which exhibits high sensitivity and safety are to exclude the presence of metastases of another primary tumor or to confirm changes in a node of another histological origin. In the case of confirmation or exclusion of a hemato-oncological malignancy, extirpation of the whole node is preferred for diagnosis at our Department. Core biopsy can be used in this indication especially in diagnosis of lymphoma [16-18]. We use it due to practice at our Department when there are some reasons not to perform surgical extirpation of the whole node. For instance, if a node is placed deep and the patient is not able to undergo general anesthesia possibly due to internal causes [16,17]. In our study, five patients were shown to have lymphoma. In one patient, despite a negative core biopsy, suspicion of hemato-oncological malignancy persisted and it was subsequently confirmed by surgical extirpation the whole node.

When core lymph node biopsy and fine needle aspiration are compared, it should be noted that the literature reports a higher sensitivity of core biopsy; hence it should be preferred to verify the origin of morphological changes in axillary nodes [8,15]. But other studies describe that differences between sensitivity of these two methods in detection of metastases of breast cancer are not statistically significant [8]. According to habits at our Department we use fine needle aspiration when core biopsy is very risky in terms of bleeding complications.

Core biopsy is the gold standard in diagnosing of breast cancer. If there are doubts about morphological changes in the ipsilateral axillary lymph nodes in breast cancer patients and if these cannot be considered clearly benign, core biopsy is the method of choice for staging and treatment determination. Core biopsy is preferred over fine needle aspiration.

In other indications, axillary node core biopsy is also preferred and is very accurate in diagnosing metastasis of another primary tumor or in determining the histological nature of morphological changes in a benign node. It is also possible to indicate core biopsy to exclude or confirm a hemato-oncological malignancy if surgical extirpation of the whole node cannot be performed or if it is risky.

In addition, this type of biopsy is very safe with minimal risk of per procedural complications. The introduction of the core biopsy to the routine practice can contribute to the implementation of targeted axillary dissection.

None declared. This research did not receive any specific grant from funding agencies in the public, commercial, or not-for-profit sectors. 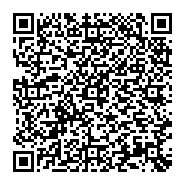