Research and Reports in Gastroenterology is a peer reviewed, open access journal dedicated to the basic, clinical and translational Studies of physiology of Digestive System, Gastrointestinal disorders and diseases of related organs. The Journal aims to provide a platform for the exchange of scientific information addressing clinical research and practice of Gastroenterology and Hepatology.

Submit manuscripts at https://www.scholarscentral.org/submissions/research-reports-gastroenterology.html or an e-mail attachment to the Editorial Office at  [email protected]

Manuscripts elucidating on all disciplines of Gasteroenterology and therapeutics advancements are solicited. The topics include:

The journal accepts original manuscripts in the form of research article, review article, short communication, scientific correspondence, letters to editor and editorials for publication in an open access platform. The Editorial Manager System helps in maintaining the quality of the peer review process and provides easy access to the authors to track the status of the manuscript, including evaluation and publication in an automated way. Subject experts under the supervision of the Editor-in-Chief review the manuscripts. Approval of at least two independent reviewers and the editor is mandatory for the acceptance of the manuscript for publication.

Gastroenterology is the branch of medicine which deals with the study of digestive system and diseases of the related organs. It involves detailed understanding of the physiology and functioning of the gastrointestinal organs. Diseases affecting gastrointestinal tract are the major focus of Gastroenterology. Hepatology is the study of liver, pancreas and biliary tract are considered as sub-specialty in this study.

The digestive system or alimentary system consists of accessory organs of digestion from mouth to anus along the alimentary canal and gastrointestinal tract. Digestive organs include esophagus, stomach, small intestine, colon and rectum, pancreas, gallbladder, bile ducts and liver. Digestive systems’ main function is digestion and absorption of food. The gastrointestinal tract is responsible for mechanical breakdown of food into small molecules that starts in mouth and continues into stomach and chemical digestion by enzymes helps to absorb the nutrients into the body which continues in the intestines.

Hepatology is the sub specialty in Gastroenterology which deals with the study, analysis, prevention and administration of ailments that influence Liver. Liver is the vital organ which plays a major role in metabolism. Liver is highly specialized and regulates a wide range of high volume biochemical reactions. Liver weighs about 1.44-1.66 kgs located at upper right quadrant of abdominal cavity and rests below diaphragm to the right of the stomach and overlies the gallbladder.

The esophagus also known as gullet which consists of muscular tube through which the food passes to stomach. The average length is 25 cm and varies with height. High amounts of food is passed over time in the esophagus and so it protected by a mucous membrane of epithelium and acts as a smooth surface.

Esophageal disorders are often associated with swallowing disorders where prolonged swallowing time is observed. Other disorders of Esophagus include Gastroesophageal Reflux normally called as Heartburn, Barrett’s Esophagus, Esophageal Cancer, Esophageal Motility Disorder and Esophageal Dysphagia which can prevent the food passage leading to difficulty in swallowing and can completely block the esophagus.

Stomach is a vital organ of the body which plays an important role in digestion. The stomach is a J shaped organ but it varies in size and connected to esophagus to its upper end and small intestine at its lower end. Gastric juice produced by the stomach plays an important role in digestion. To protect the stomach from the acid, mucus is produced which acts as a protective layer. Diseases of stomach are often caused by the infection of Helicobacter pylori such as Ulcers, Stomach Cancer and Gastritis.

Generally inflammation of intestines is found which leads to several disease conditions such as Enterocolitis, Inflammatory Bowel Disease and Intestinal Ischaemia.

The pancreas is a glandular organ in the digestive system. It is located in the abdominal cavity behind the stomach and produces many hormones as it is an endocrine gland. Pancreas secretes fluid that has enzymes, into the duodenum which helps in breakdown of carbohydrates, proteins and lipids.

There are a variety of disorders of the pancreas including Pancreatitis due to inflammation of pancreas, Hereditary Pancreatitis and Pancreatic cancer. Pancreatic diseases results in abdominal pain, vomiting and nausea.

The biliary system refers to liver, biliary tract and gall bladder. Bile is secreted by liver into small ducts that joins to form common hepatic duct. The secreted bile is stored in the gall bladder which is a small organ where the stored bile is concentrated before it is released it into small intestine. Bile helps in absorption of vitamin k from the diet. The hepatobiliary system affects the biliary tract to secrete bile in order to aid the digestion of fats.

Diseases of the biliary tract (gallbladder and bile ducts) are common and result in significant morbidity and mortality. Diseases such as Cholangitis and Cholecytitis are due to inflammation of bile duct and gall bladder respectively.

To undergo diagnosis for digestive disorders patient has to undergo an extensive diagnostic evaluation prior to which thorough and accurate medical history is taken and on studying the symptoms the affected individual may have to give lab tests and imaging tests.

Fecal Occult Blood Test: A fecal occult blood test looks for the hidden blood in the stool. A small amount of stool is placed on the card and checked.

Stool Culture: A small sample of stool is collected and checked for the presence of abnormal bacteria in the digestive tract which may cause diarrhea.

Barium Meal Test: The patient eats a meal containing barium his allows the radiologist to watch the stomach as it digests the meal. The amount of time it takes for the barium meal to be digested and leave the stomach gives the healthcare provider an idea of how well the stomach is working and helps to find emptying problems that may not show up on the liquid barium X-ray.

Colorectal Transit Study: This test shows how well food moves through the colon. The patient swallows capsules containing small markers which are visible on X-ray. The patient follows a high-fiber diet during the course of the test. The movement of the markers through the colon is monitored with abdominal X-rays taken several times 3 to 7 days after the capsule is swallowed.

Computed Tomography Scan (CT or CAT Scan): This is an imaging test that uses X-ray and a computer to make detailed images of the bones, muscles, fat and organs.

Defecography: Defecography is an X-ray of the anorectal area that evaluates completeness of stool elimination, identifies anorectalabnormalities, and evaluates rectal muscle contractions and relaxation.The patient's rectum is filled with a soft paste that is the same consistency as stool. The patient then sits on a toilet positioned inside an X-ray machine, and squeezes and relaxes the anus to expel the solution. The radiologist studies the X-rays to determine if anorectal problems happened while the patient was emptying the paste from the rectum.

Magnetic Resonance Imaging (MRI): MRI is a diagnostic test that uses a combination of large magnets, radiofrequencies, and a computer to produce detailed images of organs and structures within the body. The patient lies on a bed that moves into the cylindrical MRI machine. The machine takes a series of pictures inside of the body using a magnetic field and radio waves. The computer enhances the pictures produced.

Ultrasound: Ultrasound is a diagnostic imaging technique that uses high-frequency sound waves and a computer to create images of blood vessels, tissues, and organs. Ultrasounds are used to view internal organs as they function, and to assess blood flow through various vessels. Gel is applied to the area of the body being studied, such as the abdomen, and a wand called a transducer is placed on the skin. The transducer sends sound waves into the body that bounce off organs and return to the ultrasound machine, producing an image on the monitor.

Colonoscopy: Colonoscopy helps to view the entire length of the large intestine (colon). It can often help identify abnormal growths, inflamed tissue, ulcers, and bleeding. It involves inserting a colonoscope, a long, flexible, lighted tube, in through the rectum up into the colon.

Endoscopic Retrograde Cholangio-Pancreatography (ERCP): ERCP is a procedure that allows diagnosing and treating problems in the liver, gallbladder, bile ducts, and pancreas. The procedure combines X-ray and the use of an endoscope. This is a long, flexible, lighted tube. The scope is guided through the patient's mouth and throat, then through the esophagus, stomach, and duodenum (the first part of the small intestine). The healthcare provider can examine the inside of these organs and detect any abnormalities. A tube is then passed through the scope, and a dye is injected that will allow the internal organs to appear on an X-ray.

Capsule Endoscopy: A capsule endoscopy helps to examine the small intestine. This procedure is helpful in identifying causes of bleeding, detecting polyps, inflammatory bowel disease, ulcers, and tumors of the small intestine. A sensor device is placed on a patient's abdomen and a PillCam is swallowed. The PillCam passes naturally through the digestive tract while transmitting video images to a data recorder. The data recorder is secured to a patient's waist by a belt for 8 hours. Images of the small bowel are downloaded onto a computer from the data recorder.

Esophageal pH Monitoring: An esophageal pH monitor measures the acidity inside of the esophagus. It is helpful in evaluating gastroesophageal reflux disease (GERD). A thin, plastic tube is placed into a nostril, guided down the throat, and then into the esophagus. The tube stops just above the lower esophageal sphincter. This is at the connection between the esophagus and the stomach. At the end of the tube inside the esophagus is a sensor that measures pH, or acidity. The other end of the tube outside the body is connected to a monitor that records the pH levels for a 24 to 48 hour period. Normal activity is encouraged during the study, and a diary is kept of symptoms experienced, or activity that might be suspicious for reflux, such as gagging or coughing, and any food intake by the patient. It is also recommended to keep a record of the time, type, and amount of food eaten. The pH readings are evaluated and compared to the patient's activity for that time period. 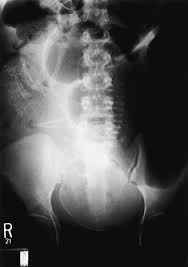 Sensory transmission in the Gastrointestinal Tract 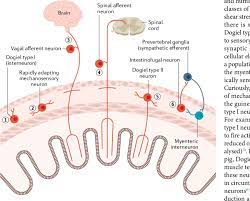 Rectal and colon cancer: Not just a different anatomic site 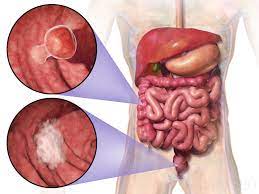