We are overwhelmed to announce “3rd International Conference on Diabetes, Hypertension & Metabolic Syndrome” which is going to be held during February 24-25, 2020 at Tokyo, Japan. The Conference will be organized around the theme “Collection of advanced therapies: Prevention of Diabetes & Metabolic syndrome”.

Millions of people are suffering and also trying all kinds of diets, pills, and treatments to clear their mental fog, to boost energy and lose weight. Unfortunately, they will all fail unless they learn how to heal the underlying Diabetes issues.

Number of people suffering from Diabetes disorders continues to rise each year. As reported by the World Health Organization (WHO), on an average 1 out of every 13 people are diagnosed globally with Diabetes each year and also projects that diabetes will be the 7th leading cause of death in 2030. Around 60% of the populations effected with Diabetes diseases are uncaring of the situation.

Diabetes Meet 2020 will feature the latest developments in research, diagnosis and prevention of diabetes, new insulin analogues, new technologies and devices for diabetic prevention, obesity and many more. Not only will this innovative conference enhance your practical and theoretical knowledge but also provides you with the unique opportunity to network with a wide range of professionals in the field of diabetes.

USA: Diabetes Mellitus has been growing at an exponential rate and World Health Organization (WHO) estimates that diabetic population is likely to reach 356 million in 2030. The United States is expected to increase to 102 per cent in the diabetic epidemic in 2030 when compared to 2000.

Middle East: The rate of diabetes in Arabian Peninsula is over twice the global average rate and much higher than some other areas of the Middle East and North Africa (MENA). 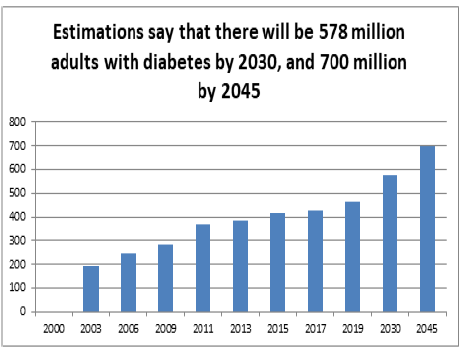 Studies show that men have higher rates of diabetes prevalence than women. Women with diabetes are more likely than men with the disease to have poor blood glucose control, be obese, and have high blood pressure and unhealthy cholesterol levels.

Diabetes is one of the fastest growing health challenges of the 21st century, with the number of adults living with diabetes having more than tripled over the past 20 years. In 2000, the global estimate of adults living with diabetes was 151 million. By 2009 it had grown by 88% to 285 million. Today, we calculate that 9.3% of adults aged 20–79 years – a staggering 463 million people – are living with diabetes. A further 1.1 million children and adolescents under the age of 20 live with type 1 diabetes. A decade ago, in 2010, the global projection for diabetes in 2025 was 438 million. With over five years still to go, that prediction has already been surpassed by 25 million will be 578 million adults with diabetes by 2030, and 700 million by 2045

Type 1 diabetes is caused by an autoimmune reaction in which the body’s immune system attacks the insulin-producing beta cells of the pancreas. As a result, the body produces very little or no insulin.

Type 2 diabetes is the most common type of diabetes. Initially, hyperglycaemia (high blood glucose levels) is the result of the inability of the body’s cells to respond fully to insulin, a situation termed ‘insulin resistance’.

Gestational diabetes (GDM) is characterized by high blood glucose levels during pregnancy. It may occur at any time during pregnancy. Women who experience GDM face an increased risk of developing type 2 diabetes later in life. In addition, babies born to mothers with GDM also have a higher lifetime risk of obesity and developing type 2 diabetes themselves. This contributes to an intergenerational cycle of obesity and diabetes that seriously impacts the health of the entire population, and the generations to come.

Impaired glucose tolerance (IGT) is a condition of raised blood glucose levels above the normal range, but below the recommended diabetes diagnostic threshold. The terms ‘prediabetes’ and ‘non-diabetic hyperglycaemia’ are
sometimes used as alternatives.

IGT is important because it:

• Indicates a risk of developing type 2 diabetes in the future;

•Offers the opportunity for interventions that can lead to the prevention of type 2 diabetes. The estimated number of adults with IGT, and therefore at increased risk of developing type 2 diabetes, is 374 million. It is predicted to rise to 454 million by 2030 and to 548 million by 2045.

Insulin: Launch of generic versions of insulin and extensively growing demand for novel insulin in controlling the blood sugar levels in both type 1 and type 2 diabetes ate factors anticipated to fuel the growth of insulin segment in the market during the forecast period. In march 2019 Eli Lilly (key player) and company launched Lispro, a generic version of rapid-acting Humalog insulin which shall be available in the US by making it more accessible for diabetic patients. Additionally, growing investments in research and development by many government organizations and new product launches by many key players are like to boost the diabetes drugs market growth during the forecast period. For example, in 2019 Glenmark launched an oral antidiabetic drug Remogliflozin in India which is considered as an effective drug treating adults with type-2 diabetes mellitus. 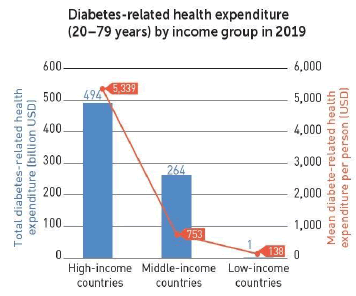 Economic and social impact: Annual global health expenditure on diabetes is estimated to be at USD 760 billion under direct costs. It is projected that these direct costs will reach USD 825 billion by 2030 and USD 845 billion by 2045. The costs of treating
complications account for over 50% of the direct health costs of diabetes.

For example, management of diabetic ketoacidosis (DKA) is a considerable part of the cost to a country’s health system: treatment of a single DKA episode in the United Kingdom costs an estimated GBP 1,387 (around USD 1,750).