A 68- year-old Japanese woman consulted our hospital with a twoweek history of dyspnea. Her personal history showed that she was a heavy smoker (10 cigarettes daily for 48 years). A giant polyp on the left vocal fold was observed in the first medical examination. 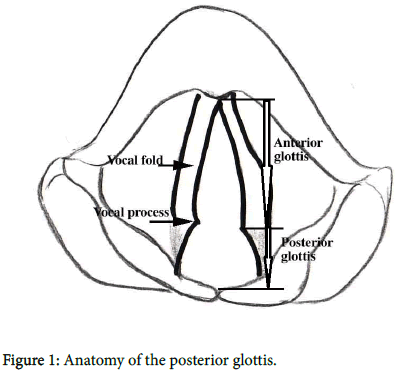 Figure 1: Anatomy of the posterior glottis. Figure 2: At the first medical examination, a giant polyp could be seen on the left vocal cord occupying the posterior glottis (Right). This vocal cord constricted the subglottic region during inspiration (Left) and exhalation revealed a slight gap between the polyp and posterior glottis.

At preoperation, our otorhinopharyngolarygologists consulted expert anesthetists concerning treatment planning including anesthetic methods. As a result, the patient was brought to the operating room, where microlaryngoscopy and excision of the vocal fold polyp was accomplished under general anesthesia without any complications. The patient has experienced no symptoms of dyspnea after operation (Figure 3). The histopathological findings indicated a vocal fold polyp. Figure 3: At 50 days after the operation, laryngosocpic examination confirmed the absence of air way stenosis.

Laryngeal polyps are one of the most common lesions of the vocal folds. Acute airway obstruction from laryngeal polyps is rare. Polyps may reach a large size and cause dyspnea [2,3].A Cause of vocal fold polyp has been known to be smoking [4]. Umeno [5] reported that most patients who underwent emergency surgery due to large vocal folds were middle-high aged women with smoking. Our patient was 68-year-old Japanese woman and a heavy smoker (10 cigarettes daily for 48 years).

Our case could perform endotracheal intubation under general anesthesia without complications and keep airway. Laryngomicrosurgery successfully removed vocal fold polyps and improve dyspnea. Some hospitals [2,5,7,8] recommended early tracheotomy for cases of large laryngeal polyps that were difficult to intubate, and perform laryngomicorsurgery at second stage. Because endotracheal intubation have the possibility to lead to dislodge polyps into the trachea and bleeding of polyps. Asajima et al. [9] presented anesthetic management for the resection of a giant laryngeal polyp as follows.They intubated the patient with a longtube (ID 3.0 mm, length 25 cm) and used high frequency jet ventilation (HFJV). As the poly remained in the larynx by positive pressure in the trachea, surgical resection was performed without difficulty.

Cases of vocal fold polyps occupied the posterior glottis (considered as respiratory glottis) cause dyspnea with the upper-airway obstruction. Therefore, this case should need for an emergency operation. At preoperation, surgeon and anesthetist should discuss about treatment planning including anesthesia methods.