Ingestion of sharp foreign body such as fish bone is not uncommon among all ages. Fortunately, complications due to foreign body ingestion are rare; however, if present, these can cause significant morbidity to the patient. It fairly known that the fish bone can migrate within the neck causing variable symptoms and signs in clinical presentation. Migration of a foreign body from the oropharynx to the submandibular gland is extremely rare, with only one case reported in English literatures. In this short communication we are reporting what we considered as second case of migrating fish bone in an adult. The foreign body was not seen in plain radiological study done initially. The patient presented a week later with swelling of left submandibular region. Computed tomography scan showed features of sialoadenitis with fish bone seen within the submandibular gland. Patient was treated conservatively with IV antibiotics, and was discharged with follow up but unfortunately he lost his follow up. We conclude from this case that careful assessment of symptomatic patient with sharp foreign body ingestion is crucial to avoid more serious complications.

Foreign body ingestion is a common complaint among adults in children, and frequently seen by practicing otolaryngologist. In adults, fish bones are the most commonly encountered accidently ingested foreign bodies [1]. Complications associated with foreign body ingestion are rare, and if present, it can cause significant morbidity, and even mortality in some cases [2,3]. Cervical abscess formation can occur if the foreign body was sharp and left un-noticed and un-treated, thus migrate through the neck, with incidence of less than 1% in reported literatures [3,4]. Sharp ingested foreign body can result in death which can reach as high as 32 % in case of esophageal perforation occurred [3]. With advanced in radiological and endoscopic techniques, management of foreign body have improved significantly, and impending complications have reduced over years. In the other hand, diagnosing cause of worsening clinical symptoms in patients with migrating sharp foreign, especially in the presence of negative endoscopy, is a challenging issue.

In this article, we describe a rare case of retained migrating fish bone ingested causing acute submandibular siloadenitis and stayed within the submandibular gland.

A 51year-old Egyptian male, medically free, presented to our emergency room complaining of one-week history of left throat pain after having a fish meal. Patient developed painful swelling in the left submandibular region. The pain was constant pricking sensation in nature and felt all over the left throat with no relation to food intake. Patient had no history of subjective fever, vomiting or diarrhea. Patient gave history of several emergency room visits where x-ray was done to him and was unremarkable (Figure 1), so he was discharged home on analgesic treatment. Patient continued to have the painful swelling for one week with no improvement, for which he re-visited our ER. On examination, patient was looking well, afebrile with stable vital signs. Local examination of the neck, confirmed by bimanual palpation, revealed left submandibular gland swelling measuring 2×3 cm, soft, mobile, tender, not fluctuation, with no sign of cellulitis and no obvious discharge from Wharton’s duct. Patient was admitted. A computerized tomography of neck with and with out contrast was done of the patient which show a hyper- dense curved line in left submandibular gland which represent a fish bone, no localized collection, major blood vessels and airways are intact (Figure 2). Patient was kept on Cefuroxime IV 1500 mg every eight hours for five days. During his hospital stay, he had significant improvement in the pain and in the swelling with the swelling almost disappeared at the end of the antibiotic course. Patient and due to especial work related issue, he was discharged home with instructions, that is to come to ER in case of any alarming symptoms show up such as; persistent fever, pain pricking sensation, or neck swelling. He was given close clinic follow up in one-week time with two weeks planned ultrasound neck appointment. In his first ENT clinic follow up, one-week after discharge from the hospital, he was free of symptoms, and tolerating normal diet well. Unfortunately, patient did show for his ultrasound appointment and was out of reach for almost one month [7]. 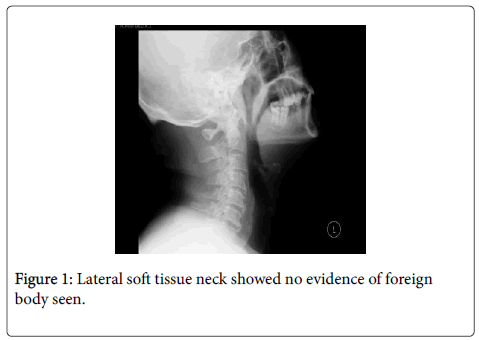 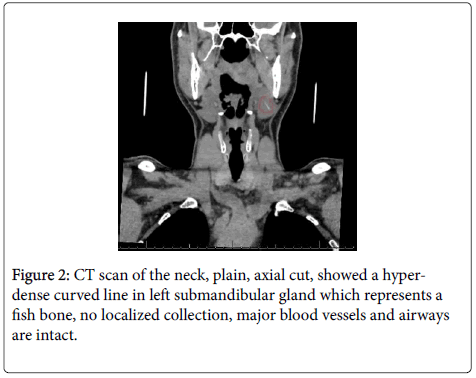 The most frequent ingested foreign bodies from otolaryngology prospective are chicken and fish bones. Beside the tonsils, the base of the tongue and the upper esophagus are the places where usually the impacted foreign bodies are found [7]. Migrating sharp ingested foreign bodies, more than others fish or chicken bones, and pins, can cause significant morbidity. It is possible that the sharp end of a foreign body causes mucosal injury on its way down, causing sudden pain and anxiety to the patient and presented to the otolaryngologist. Flexible endoscopic or rigid angled telescopic examination of the larynx performed in out patient department setting may failed to demonstrate the foreign body. Fortunately, many of these foreign bodies passed and the pain gradually subsided in one to two days. Presence of persistent pain, fever, respiratory problems, hemoptysis, or neck swelling should be taking seriously and warranty a second look endoscopic/ telescopic examination of the larynx.

Anticipating the diagnosis and role out foreign body ingestion complications can be challenging more in pediatric patients with inability to get an accurate history [5]. Several risk factors have been published, in literatures, as predictors for the occurrence of foreign body complications such as extreme of age, delayed presentation, presence of comorbidities, cricopharyngeal impaction, and negative radiological examination [8]. Therefore, absence of the ingested foreign body on initial examination can not rule out the possibility of foreign body to cause impending serious complication. Although the complications related to the migrated sharp foreign body can be immediate in form of upper respiratory airway abscesses [9], it’s migration through the pharyngeal wall can results in superficial cervical abscesses even few days to months later [7-12]. Fever, sore throat, odynophagia, and presence of neck swelling are the most common clinical presentation of neck infection following migrated ingested foreign body as seen in our patient. Several cases have reported in literatures with the migrated foreign body lodged in the lobe of the thyroid gland, burst through neck externally, pierced the internal jugular vein, presented as a mediastinal mass, pulmonary mass, cardiac tamponade, liver abscess, or even peritonitis [13-18]. Foreign body-associated sialoadenitis of submandibular gland is very rare within the literature [19]. Up to our knowledge, this is the only case presented with submandibular sialoadenitis resulted from ingested fish bone migrated from floor of the mouth and retained in the submandibular gland.

Upon encountering a case of persistent pain, fever, or suspecting complications in patients with history of foreign body ingestion, CT scan can be done. CT scan is highly accurate, with high positive value and can be used to confirm the presence of foreign body, identify its site and determine relationship of the foreign body in the neck, which is often missed by plain neck radiographs [20]. Although, CT scan is better than plain X-ray of the neck, a plain radiograph is the first line of investigation and positive findings will be the bases for patient further management.

Sharp foreign bodies ingestions, such as fish bones, are not uncommon. The sharp end of the ingested fish bone inflicts mucosal injury on its way down, causing pain and anxiety to the patient. Normal clinical examination and negative endoscopy does not role out the presence of foreign body. Many such foreign bodies pass without alarm. Persistence of symptoms, such as pain and sore throat, or sudden onset of ominous signs, such as hemoptysis, fever, or neck swelling, must direct the otolaryngologist to the possibility of a migrating foreign body. A high index of suspicion is needed to rule out retained, migrated foreign body related serious complications. A Neck CT scan plays a major role in locating the foreign body and identifying the presence of complication. Management is individualized and aimed to treat infection, and remove the foreign body. We report this case of a healthy patient presented with siloadenitis, which is an unusual presentation of common foreign body ingestion, i.e. fish bone. We valued here the importance of history taking and re-evaluation in case of persistence symptoms. 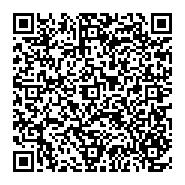