A Retrospective Study of Body Mass Index, Cigarette Smoking and Hypertension, was the Danger of Renal Cell Carcinoma (Yemen)

Renal cell carcinoma is the seventh primary reason for cancer, accounting for 3% of malignancy in men Body Mass Index (BMI) and smoking is accepted danger factors for Renal Cell Carcinoma (RCC). Hypertension and antihypertensive drugs have also been concerned. On the other hand, the independent influence of each factor is not well-defined. Although several studies have described these as individual danger factors in univariate analyses, rarer have estimated the independent link of each risk factor in multivariate analyses [1,2]. Raised Body Mass Index (BMI) has reliably been originating to be a danger factor for RCC in females but fewer so in males [3-7]. Cigarette smoking has been reliably identified as a danger factor for RCC in males, but not in females [8].

In the one prospective study that involved males and females, the comparative risk between cigarette smokers was significantly elevated for males, but then not for females. Hypertension has been irregularly related to the danger of RCC [9,10], by some studies finding a relationship only among females and others only between males. The danger of RCC in users of thiazide diuretics remains uncertain [3]. Given that comparatively insufficient studies have been conducted with retrospective data and occurrence cases of RCC in the middle of both males and females, we required to control if our cohorts could contribute to the accepting of the apparent sex discrepancy between the previously informed danger factors. We also require9d examining the independent link of hypertension with RCC, as it is powerfully related to obesity. Consequently, we studied the link between hypertension, BMI, weight change, and cigarette smoking and the danger of RCC.

Thirty patients (16 females and 14 males, mean age 43.4 years) with renal cell carcinoma were included in this study in the Department of Urology in EZ Alden AL-Shibany Hospital in Sana'a city. The study was conducted between Feb 2018 to Sept 2019 renal cell carcinoma was the diagnosis on basis of clinical, Imaging methods (U/S, CT) information on elevation was gained from the baseline Questionnaire. While weight was checked in our department. The participant was tested to report physician-diagnosed hypertension. Information on smoking Initiation, cessation and number of cigarettes smoked was queried at baseline. This study was executed in retrospective design and all patients provided written informed consent.

Multivariate analysis was the patient to investigate independent predicted factors for renal cell carcinoma. Chi-square Test and the fisher’s exact test were used for the difference between the categorical variable the data were analyzed using the statistical package for social sciences version 18. (SPSS 18) p-value of fewer than 0.05 was considered statistically significant. 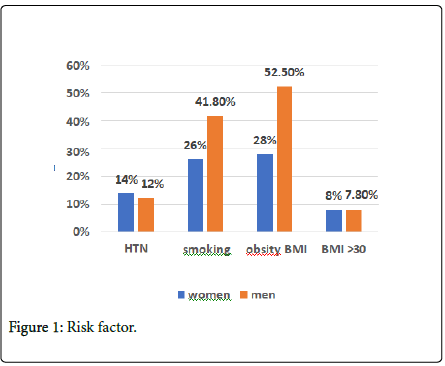 Table 1: Shows the danger factor for women and men.

Our pathology the popular of cases were defined as clear cell type 60% papillary cell type is 5%, unclassifiable type 25% (Table 2 and Figure 2). 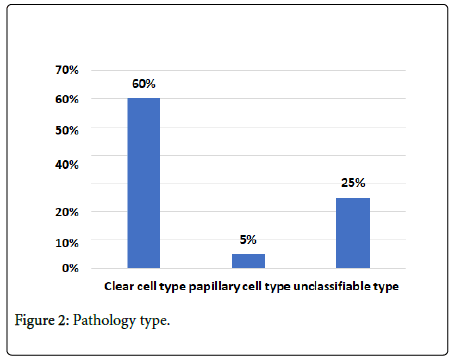 There is insufficient information on hypertension, obesity, and cigarette smoking as a danger factor for RCC and the value of retrospective data such as the recent study [11]. The previous reports have recommended that the danger related to BMI, cigarette smoking and hypertension have different magnitudes between males and females [12]. Our data is reliable with that probability; however, the numeral of cases involved in our study was too small to mate conclusive assessments across sex. In our study, BMI was related to significantly increased danger in females whereas, a non-significant risk was observed in males 41.8%. On the other hand, cigarette smoking was linked with danger in males, even though, nonsignificant links with females. Hypertension was independently related to significantly increased danger of RCC in both females and males [13]. Although, in our study, hypertension was more common in women so the risk of RCC more in women than men. The previous report has implicated and hypertension medication as a causal agent in the carcinogenesis of the prevalence of hypertension individuals in particular thiazide diuretics have been supposedly related to as increased danger of RCC [14]. In the present study, we did not have complete information in construction on dose and duration of thiazide therapy nine to thirteen and the mechanism by which hypertension influences production an accused role in RCC is poorly understood.

This study found that hypertension was related to an increase in renal cell carcinoma in men and women. BMI was related to significantly increased danger only in women and cigarette smoking was increased danger only in men. The growing occurrence of RCC was done, in part, to increase in the prevalence of these modifiable danger factors, the mechanism by which these factors in flounce the growth of RCC need additional study.

The authors declared that there were no conflicts of interests arising in the process of this study. 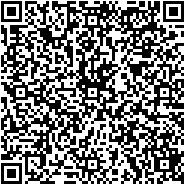