ANPR provides solution in which the steps to run an efficient intelligent transport network might be taken. Owing to the rapid increase in vehicles it has become a requirement for traffic control management. ANPR’s main goal is to track traffic and for the purpose of defense. Number plate recognition uses image processing techniques or OCR techniques and edge detection technology to detect characters on license plates. The model comprises of three modules which are module for car detection, module for license plate segmentation and module for recognition. Starting from auto robberies, violating traffic laws, to law enforcement administration, Image processing gave us a determination to put a stop to these violations. This review paper provided an examination of the different license plate recognition design implemented so far.

The identification of license plate is a very good source of knowledge for record detection and recognition. But the conventional license plate recognition process is a boring one. The manual way of identifying the vehicle and its owner is not that applicable in detecting license plates to retrieve the hidden treasures of information. Automatic recognition of license plate is an important stage in the intelligent traffic network, and several ways for the construction of ANPR architecture have been developed. Although the proportion of the license plate in the image is greatly correlated with shooting distance, therefore the ANPR architecture is not easy to balance in. Vehicles in motion, however, are too tiny to capture in the huge open space and clear recognizable license plate images. Identifying a license plate from tiny and distorted pictures will reveal a lot of effort. One answer is to use a CCD camera with panning, tilting, and zooming (PTZ) capturing functions.

The various researchers have proposed various techniques for every step and an individual technique has its own pros and cons. The method for recognizing license plate includes the three main steps. That is the region of extraction of interest, extraction of plate numbers and recognition of character. Below is the block diagram for the license plate system.

License plate recognition is achieved through device program ANPR. Images taken by using cameras displays the output of vehicle plate. ANPR’s basic work is reading and unfolding license plate. ANPR are also called by the name of ALPR (Automatic License Plate Recognition). The software of this system forms a record of all number plates that interpret with all the related data such as date, time and GPS location. It utilizes the OCR technology for recognizing characters of number plates Figure 1. 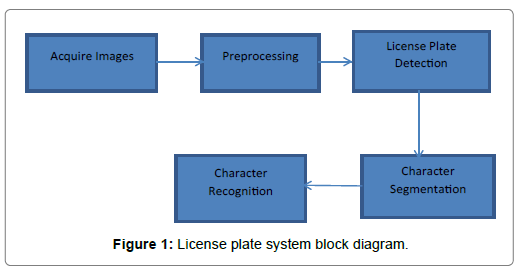 LPR is an important process of automatic parking. It will be a feature anticipated by industry demand for higher commercial parking management projects across the smart city areas. It has also been utilized for security purposes in toll collection systems, traffic control, also in gas stations, and many other opportunities for exploration. ITS plays a leading role in facilitating smart cities due to its many applications such as highway surveillance, urban logistics and enforcement of traffic laws and much more.

The layout of the rest of the paper is as follows: section II is a summary of the literature showing the research conducted by other researchers in the field of license plate recognition, section III is an overview of the conclusion and future work.

Some protocol developed previously will be discussed in this section. A significant amount of work has been done over the last couple of years on image processing technique and deep learning for object detection purpose. Several different recognition and detection algorithms for vehicle reconnaissance have evolved in this field. We can see different current techniques occurring from literature review.

K.K. Kim built a license plate recognition system by following a learning protocol. The camera captures an image inside the car detection module. Then, the picture of the candidate region is provided as output. The two TDNNs were taken as the horizontal and vertical filters to find the license plate. The segmentation rate was 97.5 per cent, and a recognition rate of 97.2 per cent for the proposed system [1].

Chin-Chuan Han suggested a device that not only tracks several targets but also obtains high-quality images on plate numbers. A computer with a tuned dual-camera system has been built here by the author; a stationary camera and a pan-tilt-zoom camera are designed to monitor moving conveyance in an open field. The license plate for recognition has been sequentially identified by CNN classifier. As 64 vehicles entered this region illegally, data was composed manually from the science pictures and 59 IDs were accurately detected using this tool [2].

Madhusree Mondal in 2017 developed an ANPR framework focused on the learning capabilities of convolutional neural networks. The self-synthesized function of CNN was used here, as it distinguishes the vehicle states from the number plate. The system was organized in this work in an echelon network of feature detectors that conducted consecutive processing of visual data pertaining to the dominant visual processing experience of the visual cortex, which influenced the computational model of the CNN. The findings of this research were observed with fewer training samples and turned out to be as 90 per cent higher precision rate [3].

Andrew S. Agbemenu in 2018 proposed an ANPR method based on the characteristics and variations of the plates therein. The author has proposed in this work an algorithm that is enhanced to perform with Ghanaian license plate for conveyance. The designed model used two candidate detection algorithms as the detection of edges and the algorithms matching the template. The device then implemented the character segmentation technique particularly with square plates to prevent noise effects, arrangement of characters and skewing. At the final point, character recognition was rendered with the use of tesseract OCR engine. Feature detection was slightly low but had a good success rate, with an average speed of 0.185s detecting 454 plates with 90.8 per cent accuracy. The optical character recognition provided an average of 0.031s for the procedure and successfully identified approximately 60 per cent of the detected plates [4].

Rayson Laroca in 2018 proposed an ALPR system which discussed the robustness and effectiveness of a framework based on the state-ofthe- art YOLO artifact detector. The CNN are qualified and adapted for each ALPR stage to be resilient under different conditions. In this work, the author developed a two-stage attempt explicitly for the segmentation and identification of characters, using simple data augmentation artifice such as inverted number plates and character returns. The findings for the UFPR-ALPR dataset were found to be difficult as both commercial systems were below recognition levels of 70 per cent. Yet the result was higher with a recognition rate of 78.33 per cent for the proposed system [5].

Prashengit Dhar in 2018 developed an automated LPR program to support ITS for the identification of Bangladeshi license plates. This work plate shows clearly white background with black fonts. Prewitt operators performed the detection of the number plate to segment the edges. Morphological dilation was performed to accentuate the points. Eventually, deep CNN was used to accomplish the reconnaissance job. In character classification, the protocol showed a strong precision rate of 99.6 per cent [6].

Cheng-Hung Lin in 2019 proposed a three-stage license plate recognition system based on Mask-RCNN which was used for various shooting angles and numerous oblique images. The author used YOLOv2 for the associated conveyance in the preceding stage for vehicle detection. Next stage was the location of the license plate where YOLOv2 was again performed to detect number plate. During this phase, YOLOv2 separates the images of phase I captured vehicles into 19 x 19 grids. In the final step, the author used Mask R-CNN for character recognition. The results in this work depicts that the proposed model could classify vehicle number plates including bevel angles above 0-60 degrees and further accomplished the mAP rating of around 91 per cent [7].

Nazmus Saif in 2019 have proposed a system to detect and recognize the Bangla license plate from the vehicle picture by using the convolutional neural networks. In this work, main focus to choose convolution neural network in the designed system is preferred because of its configuration for the end-to-end pipeline. CNN clearly outperformed conventional image processing algorithms for their case, and compared generalized CNN models better in different scenarios. The detection research was done using YOLOv3 which consists of 53 convolutional model layers. The second stage after identification is image segmentation and recognition of the characters it is. During this step, the device whips out the number plate region and then moves it to the second YOLO model for segmentation and platform image recognition. As a result, the model was checked with 200 images and correctly recognized the license plate number for 199 images, i.e. 99.5 per cent accuracy rate [8].

This paper describes a study of vehicle number plate identification in traffic surveillance. ANPR is very helpful and reliable for efficient traffic monitoring. Device with powerful image processing technique can easily detect interested vehicles from various angles and view owner information as output. ANPR systems play an important role in the growth of the smart transport network. Recognition may use the image processing technique combined with neural networks to identify the number plates where the angled or side view images, moving distance images, numbering scheme, and number plate type (background) can be further improved. Detection of objects and neural networks is useful for detecting side views or tilted images and moving images from distance. For potential recognition systems, the choice is to use high-resolution cameras with an increased number of frames for good accuracies and improved accuracy for recognition in future.