A Study Assessing an Injection Port of Administration of Insulin

Methods: Level III evidences are required during official licensing: 15-20 individual treatment data and non-significant result. Twenty adult patients, with 1 type diabetes mellitus, were invited in the prospective study. The patients on a voluntary basis were assigned to the two following treatment methods for three weeks. 1; classic insulin dosage method 2; usage of prím-A-portTM. Regular human or fast-acting and glargine-insulin were dosed with the same device in the 2nd group. The results were evaluated by the measure of fructosamine and with questionnaires.

Results: 66.6% of the patients declared that prím-A-portTM facilitated the treatment. The authors examined the changing in the levels of fructosamine in both groups. They used “t-test”. No significant difference was observed. The cumulative frequency distribution is p=0.892.

Conclusions: This study shows the utility and the efficacy of prím- A-portTM in charge several dose of insulin, moreover proves it as an alternative form of the classic insulin dosage method. 10 pinpricks needed instead of 150 monthly.

The estimated prevalence of diabetes mellitus in Hungary is 6% (roughly 600.000 people), and around once again, who does not know that they have this morbidity [1]. Among the 600.000 people approximately 30.000 have 1 type diabetes mellitus [1]. Many patients need several doses of insulin to achieve the adequate blood sugar level.

The skip of insulin dosage is a common phenomenon and has a connection with the increased rate of the diabetes complications. The reduction or the elimination of the pain, anxiety and discomfort may facilitate the treatment [2-7]. According to experiences 45% of the patients stop the occasional injections due to the above mentioned reasons [8]. In the last decade, due to the development of needle making technology, shorter and narrower needles were improved [8]. The fear of the needle is still a problem today and it has to be remedied [8]. Non-invasive or minimally invasive methods facilitate the treatment for patients with needle phobia [8].

In order to replace the classic insulin dosage method we introduced the prím-A-portTM device [9-11]. The prím-A-portTM is a self-inserting, disposable and portable device. We can administer the insulin subcutaneously with a syringe or a pen without another pinprick. Only 10 pinpricks needed instead of 150 in a month. The device is suitable for adults and children as well. They can wear it at home or at health care institutions, moreover it remains on the body during bathing, sleeping or during sports activities. We fit the prím- A-portTM device to the body with the help of an introducer needle, which puts a flexible tube, a soft cannula under the skin. After that we can administer the insulin through the device with a syringe or pen. The insulin administering needle is located above and parallel with the skin until we dosage the insulin through the cannula to the subcutaneous tissue. The dispensing needle can be inserted several times, because the needle is guided in the disconnect cover and in the cannula housing parallel to the skin surface, not vertically through the soft cannula into the body. It can not cause injury to the cannula nor to the skin, so anxiety can be reduced. We illustrate the prím-AportTM device on (Figure 1). The main aim of this study was that the procedure should comply with the laws and the authority requirements [12]. Thus the distribution of the device has become possible. With the expansion of the indication it is not an “off label use” anymore. Our second aim was to test whether patients who get their daily required insulin volume with the prím-A-portTM device can maintain an optimal blood sugar level for a longer period of time, compared to patients who used the classical insulin administration method. Our third aim was to get to know the patients’ opinions on the device The characteristics survey based on the answers from questionnaires. The main characteristic of the diabetes control was the blood level of fructosamine (SeFa).

This is a prospective, voluntary based study.The insetTM II infusion set is indicated for the subcutaneous infusion administered by an external pump. Indications for use. Distributor Animas Corporation and Unomedical Company. Adult (<18 years) type 1 diabetes patients, who treated themselves daily with an intensive, multiple prick per day insulin therapy using regular human or fast-acting insulin and glargine insulin, were invited to participate and on a voluntary basis were assigned into two groups. Before the trial started we asked for a permission from the Ethics Committee and declarations of consent from each participants. The first group (10 patients) administered the insulin with the classic insulin dosage method, while in the second group (10 patients) the administration of the insulin happened with the prím-A-portTM device [13]. The trial was lasted for 3 weeks. At each time when we changed the device (every third day), during the first dosing procedure, we took into account the amount of insulin, which was left behind in the soft cannula and in the cannula housing.

The cannula is 9 mm long and the amount of insulin in the cannula and in the cannula housing together is: 0,5 U (0,005 ml). 1 ml=100 U. The value was determined by the calculation method used to determine the density of the water.

In case of using the device the regular human or fast-acting insulin was followed by the daily 1 Lantus injection after 60 minutes. The device must be replaced after 3 days (72 hours), and 3 inches distance must be kept between the new and the earlier insertion places.

Fructosamine levels as a short glycaemic control indicator, from blood samples were checked at a central laboratory (Synlab Hungary Kft., Budapest) at the beginning and at the end of the trial. During the trial personal or telephone consultations were offered to both groups on how to use the prím-A-portTM device or how to administer insulin properly and they can ask for help in the case of any problems.

Patients were asked to report if they have any difficulties in the administrations. Patients from the prím-A-portTM group could also report to study investigators if they had any difficulties using the device (yes/no) and the comfort of usage compared to traditional injection (more comfort, same comfort, less comfort). Basic data (age, gender, BMI and how long does he/she has type 1 diabetes mellitus) was also recorded. All data about the participants were registered in a study questionnaire [14-16]. The presence of side effects, such as erythema or fibrosis or suppuration around the prím-A-portTM device are important for judging the device’s appropriate function.

We used IBM-SPSS 24.0 for Windows for all analyses (Armonk, NY: IBM Corporation). Prevalence was expressed as proportion (in %). For averages we used mean and standard deviation. To compare fructosamine levels we used student’s t-test with a 5% significance level.

Participants could join our study between 15th February and 31th July 2017. Adult (<18 years) type 1 diabetes patients, who had had diabetes for several years were invited in the prospective study. From the 20 patients 19 (95%) completed the trial. From the second group (10 patients), who used the prím-A-portTM device, one patient left the trial (10%), because of administering problems. Despite of coaching and several practices the needle was bent in the disconnect cover regularly during the usage. She quitted from the trial because of her impatience. The participating and the separating into two groups were on a voluntary basis. It can be seen in the table below, that the prím-A-portTM method was chosen averagely by younger patients and patients who had type 1 diabetes mellitus for shorter time. They were more interested in the possibility of change. Patients Characteristics are portrayed in (Table 1).

The reference value of fructosamine (205-285 umol/l). In both groups the levels were higher than the upper limit. This is the reason why the total level of fructosamine, in the beginning and in the end of the trial, is higher than the reference value’s upper limit in both groups. If we calculate the difference between the initial and the final total fructosamine level in both groups, we can see that the difference is lower in the prím-A-portTM group, so they kept the initial level better.

T-test: p=0.892 (this is the probability, that the two samples were removed from the same population). It is very high (p can change between 0 and 1), so we can say there is no difference (Figure 2). 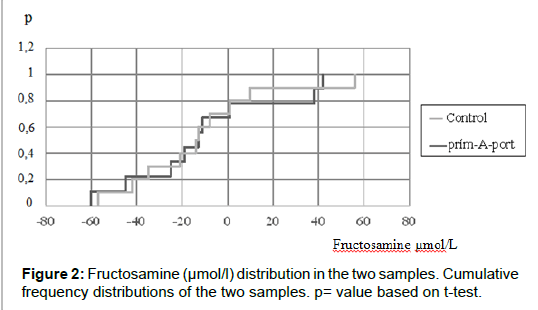 T-test: p=0.019 (this is the probability, that the two samples were removed from the same population). It is very low (p can change between 0 and 1), so we can say there is difference (Figure 3). 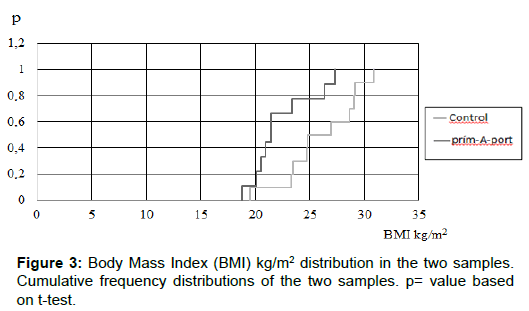 The presence of side effects, such as erythema or fibrosis or suppuration around the prím-A-portTM device are important for judging the device’s appropriate function. The participants had had 1 type diabetes mellitus for several years, so in the beginning of the trial in more cases patients had already had lesions on their skin, because of the insulin injections. To judge and rank the prím-A-portTM device, we only took into count those changes what formed during the trial. In the case of the prím-A-portTM group, only 3 patients had new, mild side effects: erythema, oedema and hyperglycaemia which disappeared in few days (Table 2).

Levente Herényi PhD, from the Department of Biophysics and Radiation biology, Semmelweis University, Budapest did the statistical background for our trial.