The work of studies is helpful in the work of individual and human development, yet the current education system shows that there has been a decline in the field of studies, especially among the youth. We are giving a suggestion to make a suggestion in the field of education. We have explained the system in different parts and have given importance to the books of the field and books that prove useful for the interest of the reader mainly. Today, many books are available on the Internet, due to which the reader has to face many difficulties in finding the right book according to his interest. Our presented mural will present to the student according to his interest and suggestions of a very important book for him. We are presenting here a web application in which the student can enter his presentation and buy the book. After that, our software will look at his interest for the next time and suggest to read his interest like a book read by other students who have been liked more by another student. Our algorithm can be given many awareness. In this paper we are presenting the work in the field of recommendation system that is already available. A study and analysis report about the available recommendation algorithm and their limitation.

At present era, the amount of information available on the Internet and the amount of information increasing daily has made it very difficult to get information overload and to choose the right information, which causes a lot of delay in getting the right and accurate information. Due to excess of existing information, it has taken a long time to reach the right and useful information, which is a serious problem in today’s era where there is such a shortage of time. Many big IT companies have tried to solve this partially but still, there is a lot of work to be done in this field so that information can be obtained in the time required to work. Work is already done. We are presenting a new information filtering system, which is a recommendation system information filtering system, based on the interests of the user, keeping in mind the instructions given by him and his users, and gives those new things and information. The system we propose has the skill of predicting whether a specific user would like an object according to the user’s previous history and profile of another user which comes in same category. The recommendation system is beneficial for both service personnel and users. The proposed system helps a particular user to find the right and useful things from an online mall. This system is beneficial for both the user and the seller. This helps a lot in preventing the user from wasting time by searching for the right item and buying the wrong item. This is quite evident in the growth of the economy in the new era. In this paper we presenting the survey report about the available recommendation techniques, their limitation, and their uses. Also detailed study of work done in this field by other developers and researchers.

The decision-making scheme for users under an information environment is called a recommender system. The recommender system is well defined from the perspective of e-commerce, which helps users find the right information to the new user based on the information received by the other user which is associated with the user’s interest. Recommendation planning is defined as a secondary means such that when there is no sufficient personal knowledge or experience of substitution, it makes correct and accurate recommendations using the recommendations of others and the decisions taken by them to make the selection.

YongenLiang, Shiming Wan: Is a personalized book recommendation system based on the filtering algorithm proposed by Yonge Liang and Shiningbank which uses the expert recommendation function to recommend books to new readers and recommend new books to readers. Which is helpful in improving the utilization rate of books and the quality of information service.

Qi Ji, Liu Shi: They have tried to solve the cold start problem and the problem in the recommendation system by matrix sparsity. According to these, in future research, the authors aim to solve the problem of matrix sparsity. For which one has to try to cluster the books with the book serial number. In future models, the researcher will take into account parameters such as time of borrower’s books, length of books borrowed, time of selection of courses and examination results [2].

Yue Huang: According to Yue Huang, in a university, it is very difficult to choose books written by many books and many authors in the same subject and to make a correct and accurate curriculum. To solve this problem, a library classification oncology-based method is proposed, which determines semantic similarities between books and subjects or courses [4].

Praveena Mathew, Bincy Kuriakose: The recommendation system by them is based on an information filtering system that helps the user to recommend a particular item. The proposed recommendation system is implemented in various applications such as films, news, music, products like books, etc. He also emphasizes the past history of the user in his proposed system such as which item he uses and which items in the future are highly likely to be used [5].

Anand Shanker Tewari, Asim Gopal Barman: According to them, whenever a user goes to buy a new item, he considers the suggestions given by his friends. The recommendation system proposed by him has realized this aspect of people as trust, and the hyped recommendation technique collaborative filtering Filtering to find similarities between two users and predict ratings of recommended books C system is proposed [6,7].

Nursultan Kurmashov, Konstantin Latuta: They have used collaborative filtering of recommendations in their proposed method. For example, a qualitative recommendation is required for people to register for information [8,9].

In this phase the relevant information of the users is gathered so that the user profile can be used, seven as well as to estimate the expenditure used by the user to calculate the performance, feature or content of the user. A recommendation manager may not work properly until the user profile / model is well constructed. So, the system tries to integrate as much information as possible from the user to make a proper recommendation from the beginning.

Hybrid feedback: Both implicit and explicit feedback are combined together to reduce vulnerabilities and achieve a best performing system known as the hybrid system. It is doing by taking the feedback from user.

Prediction/recommendation phase: In this phase the train system uses the old record and information to give the accurate suggestion to user. System uses the previous history and behavior of user and according to best matching provide recommendation Figure 1. 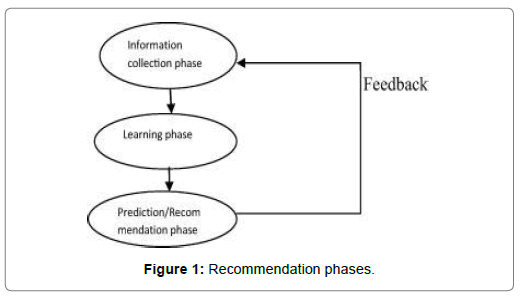 The used of previous data gather of other user data and according to provide the suggestion is known as recommendation or filtering system. It reduces the effort and time of the user. It also provides a good algorithm to calculate the revenue to the owner for any goods, manufacturing company and malls. It is of various types as given below:

The filtering techniques that is based on material previously used by user and relating to the search result. The content-based filtering techniques is only filter and suggest the product relating to the property matching with the previous product. A user buys a book and again buy another book from the same publication or writer than the system recommends the next book relating the subject of same writer and publication. It not a best suggestion or recommendation technique. It is basically used when the user especially requests to show the same contain based product or the replacement of a product. 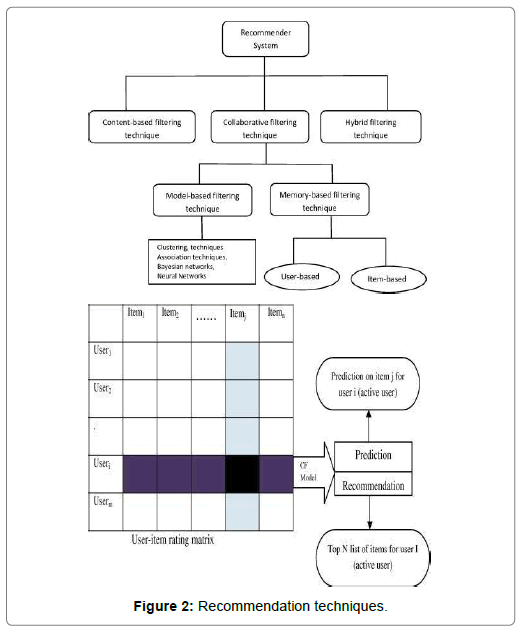 In this new era, where a lot of information is being collected every day. Simultaneously, new products are being produced daily. A user has to waste a lot of time and money in finding the product of choice and work, as well as a lot of time is wasted due to too much product. The suggestion system has a significant significance in this period. We have presented here different ways of working of suggestion systems, their advantages and limitations. This information will be of great help to new programmers and people doing research in this field in future.