Purpose: The purpose of the research was to study the relationship between menopausal status and bone structure during the menopausal transition.
Methods: A random sample of 1932 Hungarian women was enrolled in the study. Bone mass was estimated by the Drinkwater-Ross method. Bone structure parameters were assessed by a quantitative ultrasound (QUS) device. High and very high risk of osteoporosis was identified by using the thresholds of QUS parameters.
Results: By considering the changes in QUS parameters and bone mass by age and reproductive age an intensive, menopause-related change from the late 40s and then another significant change from the beginning of the 70s were observed in bone. The bone mass decreased while the porosity of the bone component of the female body decreased by age and by menopausal status. On average 15- 7% of women are at very high risk of developing osteoporosis in the premenopausal status and after the menopausal transition the decreased level of female sex hormone production doubles this risk of osteoporosis from the beginning of the postreproductive period, triples this risk for women in the seventies.
Conclusion: The results emphasize the importance of menopausal status assessment in screening for age-related increase risk of osteoporosis.

Osteoporosis, one of the most frequent skeletal disorders, is the imbalance of the bone remodelling when the balance of the bone resorption and formation functions is disturbed. The remodelling of bones is influenced by many internal and external factors: it has a strong genetic component, it is strictly regulated by the endocrine system, but it is also an age-, diet-, activity-, drug consumption-related disorder [1]. Osteoporosis is characterized by low bone mass and structural deterioration of the trabecular bone microarchitecture, and the structural changes arising from physiological and biomechanical processes result in reduced bone strength, mechanical weakness and increased fracture risk [2].

Osteoporosis has reached epidemic proportions worldwide and 1 in 3 women and 1 in 5 men over age 50 experience osteoporotic fractures [3-6]. The ageing of the populations in developed countries, the clinical consequences and economic burden of this disease emphasize the importance of the population-wide screening programmes of the disease to identify the most important risk factors of osteoporosis and its pre diagnostic forms as early as possible.

The diagnosis of osteoporosis can be made by the examination of bone density and bone quality. Bone density tends to be assessed by medical imaging techniques on different regions of the skeleton, while bone quality is usually assessed on the basis of the subject’s history of a fragility fracture. In spite of its potential for widespread use at present it is used in the screening but not in the diagnosis of osteoporosis contrary to the “gold standard” central densitometry techniques. Since the diagnostic sensitivity of quantitative ultrasound (QUS) method has been described as sensitive as in the dual x-ray absorptiometry (DEXA) in the last decades [7-9] and QUS is radiation free, portable, developed for scanning the peripheral regions of the skeleton and inexpensive it is considered nowadays as an alternative to photon absorptiometric methods in the skeletal status assessment in osteoporosis. Moreover, both the structure of the bones and on the basis of structural information bone mass density can be assessed by the QUS method.

The WHO Collaborating Centre for Metabolic Bone Diseases [10,11] recommended the T score ≤ -2.5 threshold of bone mineral density to diagnose osteoporosis in photon absorptiometric methods. However, the combined analyses of x-ray and ultrasonic methods revealed this WHO criteria of osteoporosis cannot be used for QUS methods [9]. Therefore thresholds for several QUS peripheral devices for osteoporosis risk assessment were suggested [12] by analysing the QUS parameters of subjects with and without total hip DEXA osteoporosis diagnosis.

Women from their late 40s are at higher risk of developing osteoporosis due to the body and bone structural changes (higher risk of obesity, low bone mass and bone mineral density) caused by the low levels of endogenous sex hormones, the decreased level of physical activity and the metabolic changes of the menopausal transition [13-18]. The main purposes of the study were (1) to study the bone status of women in the menopausal transition, and (2) to assess the risk of osteoporosis in the menopausal transition by a QUS method. The bone status of subjects were characterized by bone mass, BUA and SOS QUS parameters, as well as by the stiffness index derived from the QUS parameters. The DTU-one osteometer, the imaging ultrasound scanner used in the study, examines the structure of the calcaneus bone. The DTU-one device was used since the very first sign of the forming osteoporotic structure in the skeleton can usually be observed in the calcaneus bone, since it is greater than 90% trabecular volume, and there is little overlying tissue in this region of interest.

After body structural (anthropometric, body composition and osteometric) examinations women (n: 1932, aged 35+ years; (Table 1)) were interviewed by questionnaires concerning their reproductive and menstrual history, socio-demographic background, lifestyle, health conditions and subjective health during a cross-sectional survey between 2011 and 2014 [19]. Women who had any diseases or were taking any medications known to affect body composition, or who were hysterectomized or ovariectomized, were not included in the analysis. Sample selection was done by considering the recommendations of the Sampling and Methodology Section of the Hungarian Central Statistical Office, which were based on the population statistics of the administrative territories and designstatistical regions.

Table 1: The distribution of subjects by age-groups.

Subjects were divided into ten-year age-groups (Table 1). Subjects were also divided into menopausal status (premenopausal, early and late perimenopausal and postmenopausal) subgroups on the basis of the occurrence of irregular periods and the age of last menstrual period. Only the joint premenopausal (women with menstrual bleeding in the past 12 months) and the postmenopausal (women who were amenorrheic for the past 12 months and no hysterectomy) subgroups were used in the present analysis. Premature menopause was diagnosed if the onset of menopause occurred before age 40.

The level of risk for osteoporosis was estimated by using the QUS parameters’ thresholds (BUA ≤ 35.1 dB/MHz, SOS ≤ 1528 m/s) introduced by [12] for the DTU-one quantitative ultrasonic device of peripheral bone status assessment. The thresholds were constructed in women aged between 55-80 years for the DTU-one device that identified women with osteoporosis with the same specificity and sensitivity as total hip DXA at 95% confidence level (95% certainty that an individual had osteoporosis). The threshold values of both BUA and SOS were used in the present analysis. Women having lower level of one QUS parameter than the threshold were considered being at high risk of osteoporosis, while those women whose both QUS parameters were lower than the thresholds were identified being at very high risk of osteoporosis.

The computations and the statistical analyses were carried out using SPSS v. 20. Hypotheses were tested at the 5% level of random error. The centile curves of bone structural parameters were estimated by using lmsChartMaker Pro 2.3 software [24,25] based on the LMS method.

Informed consent was obtained from all individual participants included in the study. All participants were provided with detailed information on the main purposes of the study and on all examinations before their approval. The participation was voluntary and anonymous. The research objectives, the research methodology and the questionnaires were approved by the National Human Research Ethics Committee (108/2011) and the Hungarian Scientific Research Fund (EIK-1001/2011). All procedures performed in studies involving human participants were in accordance with the ethical standards of the institutional and/or national research committee and with the 1964 Helsinki declaration and its later amendments or comparable ethical standards.

Since international or foreign references are used in the Hungarian screening surveys of skeletal status, the reference quantitative ultrasound data in the studied age-group of Hungarian women were constructed for the DTU-one sonometer. By considering the reference centiles it could be stated, that all the QUS parameters decreased by age in women in the studied age interval, however an accelerated decrease was observed in SOS from the age of 45 (Figure 1). The absolute bone mass was found to be stable until the age of 65, and then revealed a decrease until the end of the studied age interval. There was a tendency for premenopausal women have a higher QUS parameters than postmenopausal age-peers, but the bone mass of women of differing menopausal status of the same age did not vary in the studied sample (Figure 1). The risk of osteoporosis increased by age in the postmenopausal subgroup, however very intensively after the age of 75 years (Figure 2). The risk of osteoporosis did not change by age in the premenopausal subgroup, the prevalence of women with high level osteoporosis ranged between 1.5-2.5%, while the prevalence of women with very high level osteoporosis ranged between 14.5-17.0% in women in the reproductive period. This means generally 15-17% of women are at very high risk for osteoporosis, and after the menopausal transition the decreased level of female sex hormone production doubles this risk for the beginning of the post reproductive period, and triples this risk for women in their 70s (Figure 2). 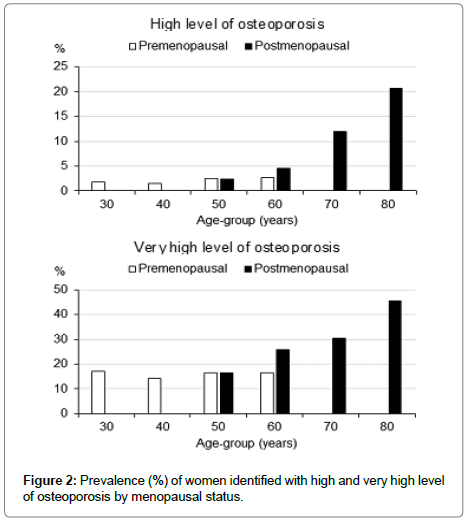 Figure 2: Prevalence (%) of women identified with high and very high level of osteoporosis by menopausal status. 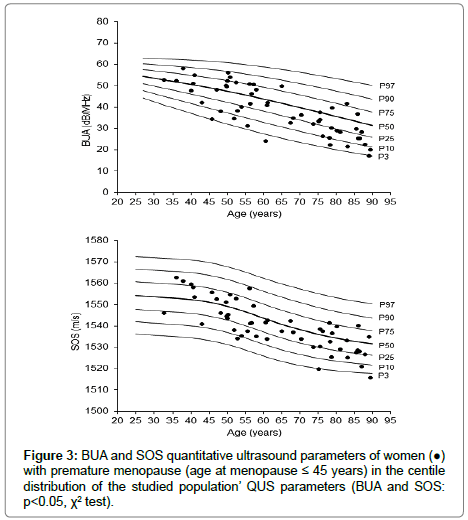 The potential of using a quantitative ultrasound method in the screening for osteoporosis has not been fully utilized. However, the International Quantitative Ultrasound Consensus Group has already suggested the method for fracture risk prediction at least in elderly women [26,27]. On the basis of their recommendation an assessment of women’s skeletal status in the menopausal transition was carried out to study the ageing processes of bone mass and structure and to evaluate the osteoporotic risk by the reproductive ageing.

By considering the results of the present analysis the following could be concluded:

(1) The changes in the sex hormone levels in the menopausal transition manifested in the structural parameters of the bones but not in the absolute amount of bone mass.

(2) The risk of osteoporosis in women did not change until the beginning of the post reproductive period, and ranged between 15- 17%, while the risk doubled in the menopausal transition and there was another shift towards an increased risk from the age 70.

Limitation of the study was the design of methodology. The level of risk for osteoporosis was estimated by using the international thresholds of QUS parameters. The thresholds were constructed only for women aged between 55-80 years, and the thresholds are not age-dependent cut-off values [12]. The methodology of menopausal status estimation also impacted the results of study, since only the occurrence of irregular periods and the age of last menstrual period were, but sex hormonal status was not considered. However, the results of the analysis emphasize the importance of menopausal status assessment in screening for age-related increase risk of osteoporosis.