An Unusual Airway Foreign Body: A Cockroach in the Trachea

We present a case of airway obstruction by an unusual foreign body in a 10 month old male. The child was brought intubated to the emergency room after he was found unconscious and blue by his parents. His older sibling reported a choking episode after he placed a black object in his mouth. Chest x-ray on arrival demonstrated right-sided air trapping but no definite radio-opaque foreign body. Due to difficulty with ventilation and post-obstructive pulmonary edema on initial bronchoscopy, emergent extracorporeal membrane oxygenation (ECMO) was initiated to help stabilize the patient. Subsequent bronchoscopy demonstrated near total obstruction of the mid-trachea by an insect-like object. The object removed appeared to be a common American cockroach.

Airway foreign body retrieval is a common part of otolaryngology practice. Most of the time, these foreign bodies are food materials or other inanimate objects. Finding a cockroach in the airway is incredibly rare and only three cases have been reported in the literature. This case also illustrates that ECMO may be considered in a patient too unstable to tolerate temporary withdrawal of ventilatory support for endoscopy. Additionally, rapid diagnosis and treatment is important when caring for a child with suspected foreign body aspiration.

Foreign body aspiration is a common and potentially lifethreatening event in the pediatric population. It is more common in children less than 3 years old and more often presents in males. Advances in endoscopic techniques have been associated with a steady decrease in morbidity and mortality related to foreign body aspiration in children. Sometimes, the foreign body may occlude the entire airway and ventilation may be impossible. If this is the case, alternate methods of maintaining blood and tissue oxygenation such as extracorporeal membrane oxygenation (ECMO) may be considered if the patient’s condition allows it. Herein, we present a case of an unusual airway foreign body in a patient who required ECMO for stabilization prior to foreign body removal.

A ten-month old male was brought to the hospital for suspected foreign body aspiration. No adults witnessed the event but his stepsister reported that she saw the patient place something black from the ground into his mouth before he began choking. His father performed CPR before EMS arrived about 10 minutes later. At that time, the child had turned blue and was not responsive. He was promptly intubated and transported to the hospital. EMS reported that they may have pushed something into the trachea during intubation and the patient was difficult to ventilate during transport.

Upon arrival to the hospital, the child was immediately brought to the operating room. Initial bronchoscopy was complicated by unstable, marginal oxygen saturations and poor visualization secondary to airway edema and copious secretions. Additionally, he did not tolerate temporary suspension of ventilator support for greater than ten seconds during bronchoscopy attempts. His oxygen saturation was able to be maintained adequately without airway manipulation and a decision was made to proceed with emergent veno-venous ECMO by pediatric surgery. Repeat rigid bronchoscopy demonstrated a near obstructive insect-like foreign body mid-trachea (Figure 1). Multiple attempts with optical forceps were unsuccessful and the object was ultimately removed by inflating a Fogarty catheter distal to it which was then withdrawn along with the rigid bronchoscope. The airway was evaluated following removal of the foreign body and was found to have sustained only minor mucosal injury (Figure 2). The object removed appeared to be the common cockroach. Figure 1: Bronchoscopic image of an intact American Cockroach within mid-trachea prior to extraction. 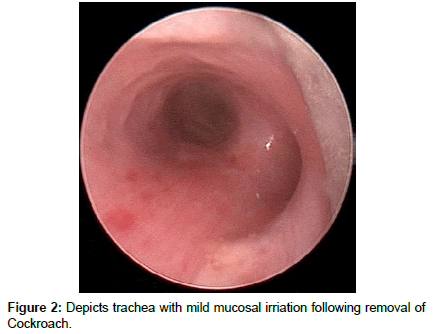 The child was then intubated and transported to the intensive care unit and weaned off of ECMO the next day. Postoperatively, the child unfortunately developed severe neurologic sequelae and seizure disorder from prolonged anoxic brain injury.

This case reports the unusual finding of a cockroach as an airway foreign body which has only been reported twice in the literature [1,2]. The age group that tracheobronchial foreign bodies most commonly occur in is 0-3 years, and they account for 7% of deaths in this age group [3]. The most frequent presenting symptom is a non-resolving cough. Other symptoms of concern include stridor, stertor, and recurrent infections. The main reasons for the high rate for foreign body inspiration in this age group are interest in the external environment and high rate of exploring objects with their mouth. Additional causes are the lack of full dentition, increased rate of aspiration with crying or yelling when in distress and insufficient development of neuromuscular structures that protect the airway [4].

Hypoxia is the most common complication that occurs during bronchoscopy for removal of foreign bodies, occurring in 6-20% of patients undergoing the procedure. A number of factors have been found to be associated with the occurrence of hypoxia during foreign body removal: skill of the surgeon, the type of anesthesia and ventilation used, the patient’s clinical condition, patient age, and nature of the foreign body [7].

There are multiple methods of dealing with hypoxia in children undergoing airway foreign body retrieval. Most important is the skill of the operating surgeon to perform a safe and efficient procedure. Each additional minute needed to perform the procedure increases the risk of hypoxia by 4% [8]. Use of inhalational anesthetic has been associated with a lower incidence of hypoxia as well [9].

Finally, this case also demonstrates the utility of extracorporeal membrane oxygenation (ECMO) in maintaining oxygen saturation during the removal of airway foreign bodies. To our knowledge this has only been described in three other cases [9]. Patients that present with difficult ventilation, marginal oxygen saturations, and high airway pressures could potentially be bridged with ECMO. Our patient did not tolerate brief withdrawal of ventilatory support for bronchoscopy and had marginal oxygen saturations that plummeted within seconds of removing support. Once ECMO was initiated, oxygen saturation was stabilized and bronchoscopy could proceed. This provided ample time for removal of the airway foreign body. However, ECMO cannulation has its limitations and requires time and availability of pediatric surgery services which is not the case for all institutions.

We presented a rare case of aspiration of a foreign body which was found to be an intact cockroach. Airway foreign body retrieval is a common part of otolaryngology practice. Most of the time, these foreign bodies are food materials or other inanimate objects. Finding a cockroach in the airway is incredibly rare and only three cases have been reported in the literature. This case also illustrates that ECMO may be considered in a patient too unstable to tolerate temporary withdrawal of mechanical ventilation for endoscopy. Additionally, rapid diagnosis and treatment is important when caring for a child with suspected foreign body aspiration.