To find the approximate solutions of heat equations in a boundary layer flow, beneath a uniform free stream permeable continuous moving surface in a nanofluid is the main purpose of this paper. First, we will propose a neural network coupled with the Chebyshev polynomials. We will then study the heat transfer and heat flow equations by using the presented Chebyshev neural network. As it turns out, this method can obtain the approximate solutions for any kind heat transfer and heat flow equations.

Approximate answers can be more helpful to study the behavior of heat transfer heat flow, and it can ensure a more efficient heat transfer with a lower operational cost. The missing slopes f rr(0) and gr(0), for some values of the governing parameters, namely the nano-particle volume fraction φ, the mov- ing parameter λ and the suction/injection parameter f0 are determined using the proposed method. The obtained results of this method have been compared with other papers results of different methods.

The boundary layer flow problems have various applications in the fluid mechanics. Most researchers have used the semi-analytical and numerical methods such as Runge-Kutta methods [1], finite difference methods [2], finite element methods [3] and spectral methods [4] to solve this type of equations. In recent years, for solving nonlinear differential equations, several analytical and semi-analytical methods have been established such as, variational iteration method [5,6], Adomian decomposition method [7], differential transform method [8], homotopy analysis method [9-13], and the spectralhomotopy analysis [14,15] and more recently, successive linearization method [16,17].

All analytical and semi-analytical methods mostly focus on the single and independent linear and non- linear equations of the boundary layer flow problems. In this paper we present an improved Chebyshev neural network method to solve the system of boundary layer problems. The considered system con- tains the nonlinear boundary differential equations governed from partial differential equations of heat equations in a boundary layer flow, beneath a uniform free stream permeable continuous moving surface in a nanofluid. Five various types elements, namely Ag, Cu, CuO, TiO2 and Al2O3 are examined as potential nanoparticles in a water-based fluid in [18,19], whereby their performance in the boundary layer flow over a permeable continuous moving surface with suction and injection are analyzed. Additionally, the parameters influencing the process’s fluid velocity, temperature and particle concentration are analyzed and discussed in detail.

The flow model and coordinate system of a flat surface moving at a constant velocity uw in a par- allel direction to a free stream of a nanofluid of uniform velocity u∞ are shown in Figure 1. The dimensionless boundary layer equations of this model can be defined as follows [18-21], 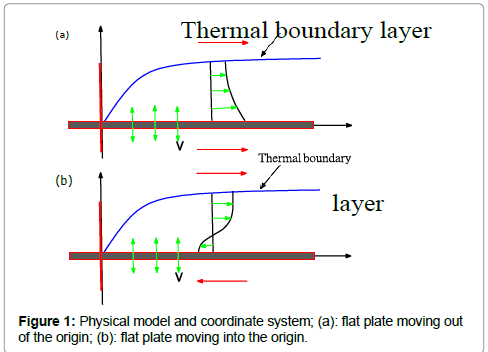 With the boundary conditions as follows,

The equation of continuity is satisfied if a stream function Ψ(x, y) is chosen, such that,

The similarly transformed equations is then introduced as follows,

where the governing parameters Pr, Le, Nb and Nt are defined as follows,

The transformed body conditions are given by,

The skin friction coefficient and the Nusselt numbers are individually defined as,

Where qw and qm are the surface heat flux and Tw is the surface shear stress, which are given by 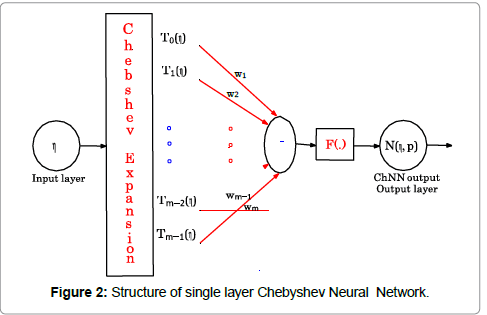 The learning algorithm can be used to update the network parameters and minimizing the error function. The weights of the proposed neural network can be to updated by using the error back propagation algorithm [22-25]. The network output with input data η and weight parameters, w, can obtain as follows,

where F(zi)=zi is an active function and zi is a sum of the weighted expanded input data’s as follows,

where η is the input data’s, Tj−1 and wi,j with j=1, 2, ..., M denotes the the Chebyshev polynomials and the weight vector, respectively. For updating the network weights we will use the principle of back propagation

where ζ, k and E(η,w) are the learning parameter, iteration step and the error function, respectively. This parameters are using to update the network weights (Figure 2).

The Chebyshev polynomials of the first kind of degree n can be define as follows,

Which are orthogonal with respect to the weight function

where, δnm is the Kronecker delta function and

polynomials may be evaluated by the following formula,

The general formulation of the boundary value problems by using the neural network can be define as follows,

where Ψi is the function which presents the structure of the boundary value equations. The parameters yi and ∇ are showing the solution and differential operators, respectively. If yi,t(η, w) are defined the trial solutions, then the equation (24) can be rewrite as,

Therefore, the minimization equation [22,23,24] of the equation (25) can be shown as the following form,

w is written as follows, 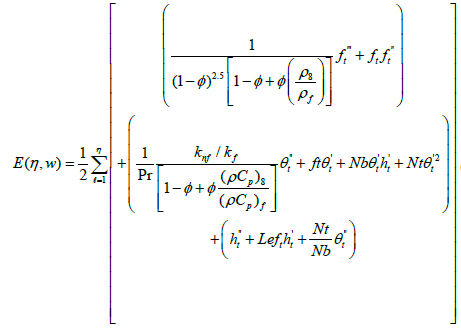 For minimizing the proposed error function corresponding to the input data’s, η, gradient of the error function with respect to the unknown parameters w will be used.

Computation of gradient for optimizing the weight values

where wi,j denotes the network parameters and Tj-1 denote the first, second and third derivatives of (n) the Chebyshev polynomials for n=1,2,3 respectively. Therefore, the equations (27) up to (29) can be rewritten as follows,

Now, for minimizing the error function (30), the gradient of this function with respect to the parameters wi,j are given by, 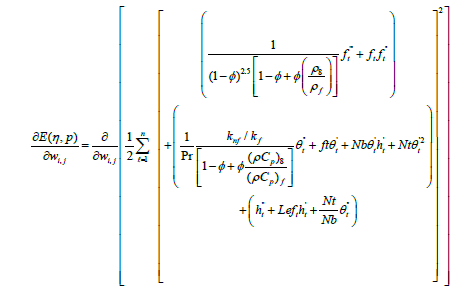 Finally, approximate solutions for the proposed heat equations can be computed by using the converged Cheby-shev neural network results in the equations (27) up to (29).

Convergence of the error function

then, sequence Em(η, p) converges uniformly to a function E(η, p) if and only if for every c>0 there exists an N so that m>N and k>N implying that |Em(η, p)−Ek(η, p)|<c. Some sufficient conditions for the convergence are as follows,

are uniformly convergence for η ∈R

are uniformly bounded for η ∈R . For 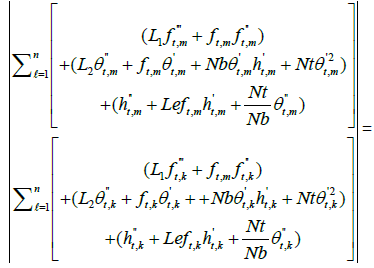 The analytical solutions of the nonlinear heat equations (9) up to (11) by using the proposed method with the five Chebyshev polynomials can be shown as follows,

can be obtained as follows,

method. The missing slopes f(0)tt and g(0)t, for some values of the governing parameters, namely the nanoparticle volume fraction φ, the mov- ing parameter λ and the suction/injection parameter f0 are determined by using the Maple, Matlab softwares coupled with the Chebyshev neural network method.

Table 2: Comparison of λc for various f0 when φ=0 (purefluid).

Table 3: Values of λc for different nanoparticles and different values of f0 when φ=0.1. 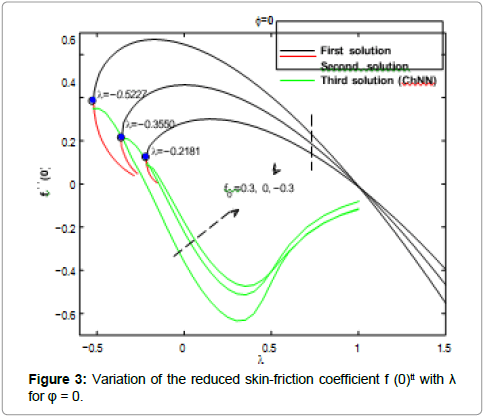 Figure 3: Variation of the reduced skin-friction coefficient f (0)tt with λ for φ = 0. 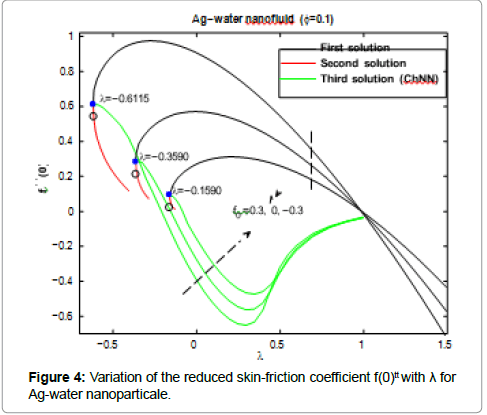 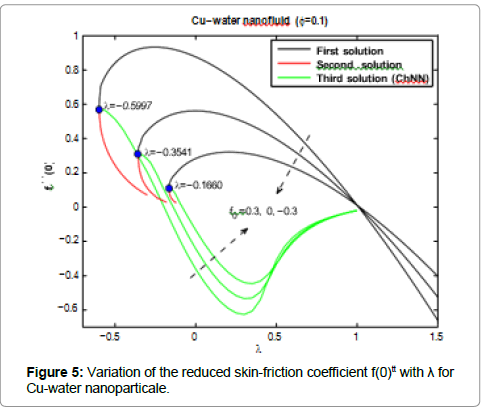 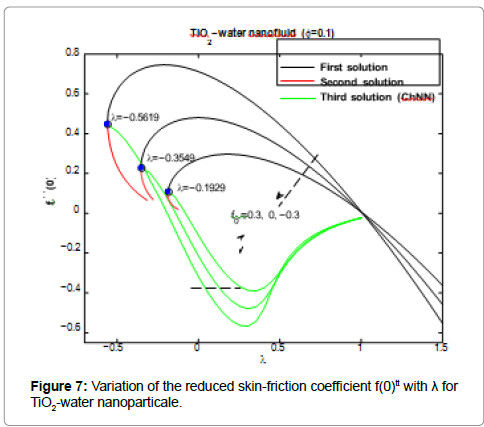 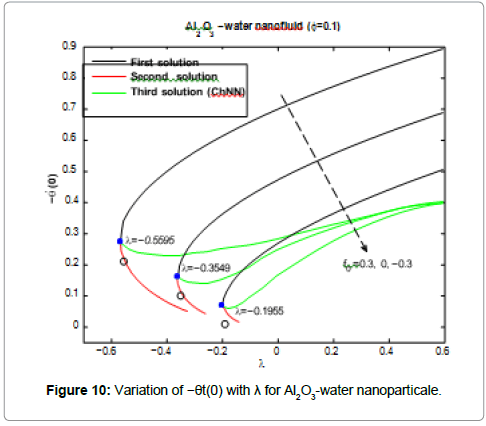 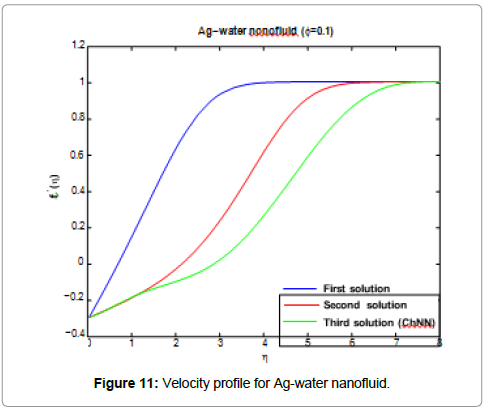 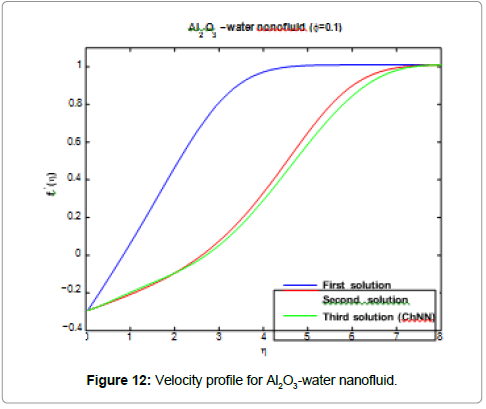 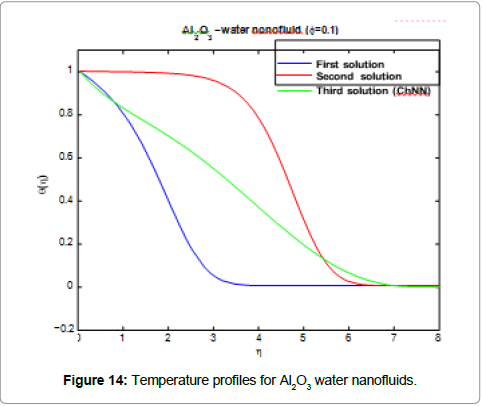 As seen from these figures the values of f(0)tt are positive when λ ≤ 0. They become negatives when λ ≥ 1 and positive-negative when 0 ≤ λ ≤ 1 for all values of the suction/injection parameter f0. The Chebyshev neural network can give also third solutions for f(0) ttwhen λ ≤ 0. The third solution is coupled with the second solution as shown in Figures 3-8. Physically, a positive value of f(0)tt means that the fluid exerts a drag force on the plate, and a negative value means the opposite. The zero value of f(0)ttwhen λ=1 does not mean separation, but it corresponds to the equal velocity of the plate and the free stream.

Figures 9 and 10 show the variation of −gt(0) with λ for Ag and Al2O3-water nanofluid and different values of f0 when Nt=0.1, Nb=0.3, Le=1, Pr=0.1 and φ=0.1. By using the fifth order Runge- Kutta method with shooting technique can find dual solution for −gt(0). The Chebyshev neural network can give third solutions for -gt(0) which is couple with first solution as showed in Figures 9 and Figure 10. It is seen that the solution is dual when λ ≥ 0, while trinal solutions are found to exist when λ ≤ 0. The values of −gt(0) are positive for all values of λ, for all values of the suction/injection parameter f0.

agreement with the previous investigations for the case f0=0. Moreover, from the table (2), we find that for all nanoparticles the values of |λc| increase as f0 increases. Therefore, suction delays the boundary layer separation, while injection accelerates it.

For plotting these figures the equations (37) up to (42) have been used. It appears that all these profiles satisfied asymptotically the far field boundary conditions equation (13). The existence of triple solutions in the Figures 3-10 can be satisfied by the velocity and temperature profiles are showed in the Figures 11-14. The velocity profiles for the first, second and third solutions when λ=-0.3 shows that the velocity gradient at the surface is positive, which produces a positive value of the skin friction coefficient (Figures 13 and 14).

We have investigated the modified Chebyshev neural network for solving a complicated nonlinear dynamical heat system in a boundary layer flow, beneath a uniform free stream permeable continuous moving surface in a nanofluid. Numerical results show the effectiveness of our proposed method for solving complicated linear and nonlinear dynamical systems in the heat transfer and heat flow problems.

u, v velocity components along the x and y directions, respectively

w condition at the surface of the plate

t differential with respect to