Aneurysmal Bone Cyst of the Upper Cervical Spine in a Child: A Case Report

Aneurysmal bone cysts (ABCs) are benign osteolytic lesion representing 15% of all primary spine tumors. We report a case of voluminous C2 ABCs in 13 years old girl. Clinical symptoms involved cervical pain followed by insidious swelling and stiffness in the back of the neck without any neurological symptoms. Radiology investigation and MRI showed posterolateral expanding trabeculated osteolytic lesion of C2 spinous process with no soft tissue or body involvement. Fluid levels were identified with no spinal cord development. Surgical biopsy confirmed the diagnosis of ABCs. A primary external stabilization by halo cast preceded en bloc surgical resection using a posterior approach. Follow up showed a progressive ossification of posterior elements without recurrence or instability.

Aneurysmal bone cysts(ABCs) are benign locally aggressive osteolytic lesion accounting for about 9.1% of all bone tumors and only 15% of primary spine tumors [1,2]. This lesions occurs either in thoraco-lombar or in cervical spine [2-5]. Treatment can be challenging specially in the upper cervical spine with instability and neurologic risks. We report a management strategy of voluminous C2 ABCs with primary external stabilization and en bloc resection.

A 13 years old girl with no significant past medical history presented with neck pain , with out any traumatic history . Clinical exam found an adherent posterior cervical swelling with moderate neck limitation motion without torticolis. Neurological examination was normal and no inflammatory profile was found. An X-ray of cervical spine was done , it showed an expanding trabeculated osteolytic lesion of C2 spinous process (Figure 1). CT view showed postero-lateral expanding lesion, scalopping of the upper aspect of C3 spinous process with no pereosteal bone reaction (Figure 2). To better see soft tissue involvement and the marrow, a Magnetic resonance imaging (MRI) was done. The MRI showed C2 spinous process osteolytic lesion, fluid-fluid levels with no spinal cord development (Figure 3). The destruction of the bone and the invasion of the soft parts of the neck necessitated a biopsy 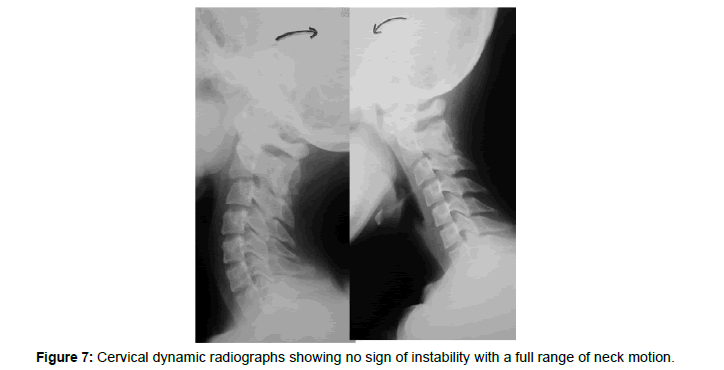 Figure 7: Cervical dynamic radiographs showing no sign of instability with a full range of neck motion.

ABCs are actually defined as ‘‘an expanding lesion with blood filled cavities separated by septa of trabecular bone or fibrous tissue containing osteoclast giant cells [1]. This lesion is usually found in long bone [3] and represents only 1.4 % of primary vertebral column tumors [5]; the cervical spine is involved in 30-41 % [6]. This begnin lesion was classified as latent (type 1), active (type 2) or aggressive (type 3) [1], and also as primary or secondary existent lesion such as giant cell tumor, hemangiomas, osteoblastomas, chondroblastomas, and telangiectatic osteosarcomas [1]. ABCs pathogenesis remains unclear. Several hypotheses ranging from a vascular degenerative process to a traumatic reparative process, a genetic translocation was also reported [1]. Spine lesions usually involve vertebral body and posterior elements described as a ‘blown out’ or ‘ballooned’ ‘soap bubble’ to underline the erosion of the cortex of the bone and elevation of the periosteum [7]. The lesion has a trabeculated appearance within flocculent densities surrounded by a ‘shell’ of delicate cortical bone [1]. CT imaging can be helpful in identifying the margins and fluid level of the cyst with high sensitivity and specificity [9]. MRI allows identification of the thin septa dividing the cyst. Biopsy of cervical lesion is indicated in a typical ABCs imaging or if secondary form was suspected [10,11] or if, as in our case, direct lesion accessibility. Biopsy must be carefully planned to be consistent with oncologic principles and not compromise definitive treatment [1]. In long bone, curettage or en bloc excision and grafting of aneurysmal cysts is the mainstay of treatment related to easily accessibility without sequelae [8]. En bloc removal is considered as the gold standard procedure in ABCs treatment which is associated with the lowest rate of local recurrence [8]. This procedure can be very challenging in the cervical spine due to the infiltration of the vertebral artery and the nerve roots [12-14] in addition of intraoperative bleeding and instability. Furthermore, children have the highest incidence of post laminectomy kyphosis because of the wedging change in the cartilaginous portion of the vertebral body and to the viscoelasticity of ligaments in children [15]. In this case anterior fusion might become necessary .

When en bloc excision is technically difficult, we may consider other treatment options as complete curettage, adjuvant selective arterial embolization, radiotherapy, intra-lesional injection of sclerosing agent, cryotherapy or embolization [12,13]. Curettage is generally performed in conjunction with an open biopsy [2]. It can be sufficiently curative in some cases [16], but with highest recurrence rates [4,6] especially in pediatric population . An innovative biopsy technique recently introduced by Reddy KI [16,17], consist in a percutaneous limited curettage procedure targeting various quadrants of the cyst might lead to an ad integrum healing. Selective arterial embolization is often recommended prior to the surgery to reduces peroperative bleeding, but it was also described as a successful sole treatment modality [18] . In this case, this technique may offer a non destabilizing, curative option [19], but on the other hand , ischemic complications are frequent with cervical and thoracic localization above T6 [19] . Despite its efficiency in reducing recurrence rate, Radiotherapy is contraindicated within pediatric population due to its high risk complications such as myelopathy, radiation-induced spinal deformity [20] and secondary sarcomas. Therefore radiation therapy should be reserved for patients with inoperable lesions or a recurrence. Although en bloc removal of the tumor has the lowest rate of local recurrence, it can be technically challenging or impossible particularly in the cervical spine due to the infiltration of the vertebral artery and the nerve roots [10]. Surgery has many risks such as paralysis, intraoperative bleeding, neurological complications, and scarring complications. In addition to the operative risks, children have the highest incidence of post laminectomy kyphosis [8]. In upper cervical spine ,external primary stabilization is an optional procedure before surgical resection.

ABCs remains rare in upper cervical spine in children. There are no specific clinical signs suggestive of the diagnosis of aneurysmal cyst of the cervical spine. Multiple optional treatment are currently available depends on localization accessibility [2]. When en bloc resection is possible, as in our case, halo cast can preceed surgery providing primary stabilization until recovery .This method of temporary immobilization is less combursom than osteosynthesis which leads in most cases to arthrodesis compromizing cervical motion.