Bacteriolyses and destructions of bacterial cell walls by zinc (?) ion solutions were investigated against Staphylococcus aureus and Escherichia coli. Bacteriolysis of S. aureus peptidoglycan (PGN) cell wall by zinc ion solution is due to the inhibition of PGN elongation by the activations of PGN autolysins of amidases. The other, bacteriolysis and destruction of E. coli cell wall are caused by the destruction of outer membrane structure due to degradative enzymes of lipoproteins at N- and C-terminals, and also inhibition of PGN elongation is dependent on the activities of PGN hydrolases and autolysins of amidase and carboxypeptidase-transpeptidase. Zinc ions induced ROS such as O2?, H2O2, ?OH, OH?producing in bacterial cell wall occur oxidative stress. DNA damages may be due to Zn ion complex formation by Zn2+ substitution into hydrogen bonds in DNA base pairs.

Silver, copper, and zinc of transition metals have highly antibacterial activities and are utilized as chemotherapy agents. Recently, antibacterial activities of zinc and its complexes call attention to potential treatments such as prevention of serious diseases [1], exploitation during bacterial pathogenesis [2,3], virus counter- measure [4], anti-cancer and anti-tumor cells [5]. Halo inhibitory tests against Staphylococcus epidermidis were carried out various sulfate solutions, in which the result was also obtained that the antibacterial effect of zinc ions was the highest in the sulfate system with halo inhibitory large zone for zinc ion solutions [6]. In this study, considering such as the highest antibacterial activity for Zn2+ ions obtained from halo inhibitory tests of metallic sulfate solutions, the processes of bacteriolyses and destructions by antibacterial activities of Zn2+ ions are analyzed and considered against thick peptidoglycan(PGN) layer cell wall, and outer membrane-connecting thin PGN layer cell wall. Further, the bacteriolytic mechanisms by zinc (Ⅱ) ions solutions have been revealed against Gram-positive S. aureus and Gram-negative E. coli cell walls, with additional DNA damage by Zn2+-DNA base pairs interactions. These Zn2+-proteins and Zn2+- DNA interactions are considered to enhance the persistence in several forms of Zn-ligand bonds (O, S, NH3, H2O, OH, SCH3, and H ligands) with Zn coordination chemistry and molecular orbital theory.

Analyses of Bacterial Cell Walls, PGN Biosyntheses and Autolysins, and the action sites of PGN syntheses and autolysins

The surface envelop cell structures of S. aureus as representative of Gram-positive bacterium and E. coli as representative of Gramnegative bacterium, molecular structures of these cell walls, molecular structure of PGN, and PGN biosyntheses and autolysins were searched in detail. Further, the reaction and the behavior of metallic ions and bacteria cell, molecular bonding manner, and zinc ion characteristics also were searched. 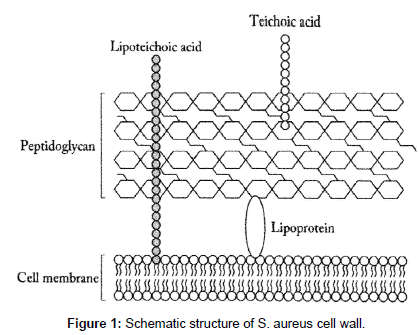 The other, E. coli cell wall consists of lipid A, lipopolysaccharide, porin proteins, outer membrane of lipoprotein, and thinner 2-7nm PGN layer in 30-70nm periplasmic space [7]. Figure 3 shows the schematic structure of E. coli, in which the molecular bonding manner of E. coli cell wall and periplasmic PGN, and the action sites of the hydrolases and degradative enzymes of lipoproteins are represented in Figure 4. Furthermore, Figure 5 shows E. coli PGN synthetic enzymes TG/TP and the action sites of the autolysins such as amidase, peptidase, carboxy- peptidase, etc. Interactions of PGN molecular structure, synthesis, autolysin molecular structure, synthesis, and autolysin influence in any event the bacteriolysis of bacterial cell walls (Figures 1-3). Figure 4: Molecular bonding manner of E. coli cell wall, outer membrane, lipoprotein, peptidoglycan, periplasm and the sites of the action of degradation enzymes of lipoproteins at N- and C-terminals. Discussions on bacteriolyses by zinc ions

PGN biosynthesis enzymes of transglycosy-lase TG and transpeptidase TP: Wall teichoic acids are spatial regulators of PGN cross-linking biosynthesis TP [8]; however, it is not explicit whether zinc ions could inhibit both TG and TP enzymes of the PGN.

Inhibition of PGN elongation due to the activations of autolysins: Zn2+ binding Rv3717 showed no activity on polymerized PGN and but, it is induced to a potential role of N-Acetylmuramyl-Lalanine Amidase [9], PGN murein hydrolase activity and generalized autolysis; Amidase MurA [10] (Figure 4).

Lytic Amidase LytA [11], enzymatically active domain of autolysin LytM [12], Zinc-dependent metalloenzyme AmiE [13] as prevention of the pathogen growth, and Lysostaphin-like PGN hydrolase and glycylglycine endopeptidase LytM [14]; The activations of these PGN autolysins could be enhanced the inhibitions of PGN elongation simultaneously, with bacteriolysis and destruction of S. aureus PGN cell wall. O2－and H2O2 permeates into membrane and cytoplasm, and then, DNA molecular is damaged by oxidative stress [15] (Figure 5).

From above-mentioned results, the bacteriolytic process of S. aureus PGN cell wall is shown in Table 1.

The OmpA, OmpC, OmpF porins of lipoproteins have metallic cation selective and hydrophilic membrane crossing pore, to be effective for zinc transfer [18]. Zinc (Ⅱ) ions reactive with -SH base, and then generate H2. Zinc bivalent is unchangeable as 4-coodinated -SZn－S－bond.

Destruction of E .coli cell wall outer membrane structure by hydrolases of lipoproteins at C- and N-terminals: ZnPT (zinc pyrithione) and Tol (Tol proteins)-Pal (Protein-associated lipoprotein) complex are antimicrobial agents widely used, however, it has recently been demonstrated to be essential for bacterial survival and pathogenesis that outer membrane structure may be destroyed [19,20].

Inhibition of PGN elongation due to the damage of PGN synthesis enzyme of zinc-protein amidase in periplasmic space, and the activities of PGN autolysins: The zinc-induced decrease of protein biosynthesis led to a partial disappearance of connexin-43 of protein synthesis in neurons [21], but it is unknown whether PGN biosynthesis is inhibited. Further, it is also unclear whether the both TG/TP should be inhibited by the zinc ions [22-24].

The other, zinc ions were accumulated in E. coli periplasmic space, in which the zinc ions are spent to the activation of bacteriolysis of the cell wall. Zinc depending PGN autolysin, amidase PGRPs [25], zinc metalloenzymes AmiD [26], amidase zinc-containing amidase; AmpD [27], zinc-present PGLYRPs [28] serve to be effective for the PGN autolysins. It is particularly worth noting that enhancement of the activities of autolysins is characterized on PGN carboxypeptidasetranspeptidase IIW [29] requiring divalent cations. Accordingly, the inhibition of PGN elongation had occurred by zinc ion induced activities of PGN hydrolases and autolysins.

As above-mentioned, the bacteriolysis and the destruction of E. coli cell wall in process of the permeability and antibacterial activities of zinc ions are summarized in Table 2. Table 2: Bacteriolysis and destruction of the E.coli cell wall by the permeability and antibacterial activities of Zn2+ ions.

Zn2+ ion induced occurrence of generations of ROS and hydrogen peroxide H2O2 in bacterial cells damages DNA, in which formation of DNA damage resulting from a release of catalytic binding of zinc ion to DNA with generation of ･OH radicals, and by reaction of H2O2 with the metal produces the strand breaks in DNA as well as DNA base-pairs modifications and deoxyribose fragmentation. Transfer of Zn2+ ions into hydrogen bonds in DNA base-pairing

G (guanine) ≡ C (cytosine) and A (adenine) = T (thymine) pairs occurs by Zn2+ ion substitution shown in Figure 6. Thus, it may be considered that DNA damages due to Zn-complex within DNA basepairs G≡C, A=T is formed in the hydrogen bonds. A=T base pairs are less stable than G≡C base pairs in Zn-DNA [32]. These considerations in the Zn-DNA base-pairs interactions must account for Zn2+-ligands (6-coordination and 4-coodination complex formations) in DNA base pairs of G≡C and A=T, according to coordinated chemistry and molecular orbital theory [33,34]. 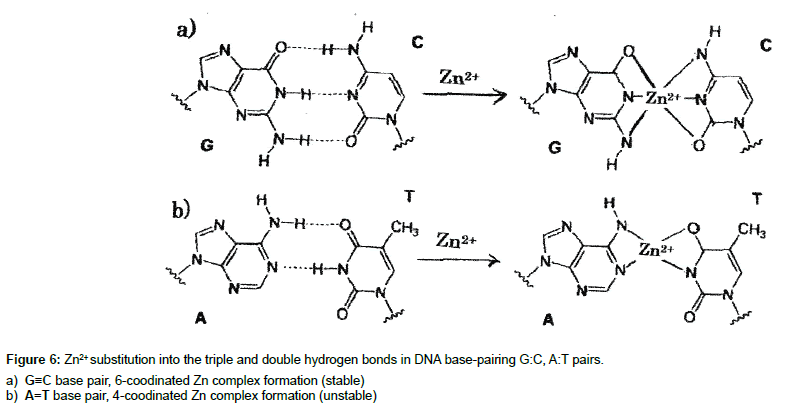 (1) Bacteriolysis and destruction of S. aureus PGN cell wall, in which wall teichoic acids control PGN synthesis cross-linking TP, are due to the inhibition of PGN elongation by the activities of PGN autolysins; amidase AmiA and AmiE, PGN hydrolase Lysostaphinlike endopeptidase (Glycine cutting).

(2) Bacteriolysis and destruction of E. coli cell wall are due to the damage of LPS biosynthesis, destructing of outer membrane structure by degrading of lipoprotein at C-, N-terminals, owing to inhibitions of PGN formations by activities of PGN autolysins of amidase and carboxypeptidase.

(3) By the penetration of zinc ion into S. aureus cell wall, production of O2, H+, H2O2, ONOO－occurs against S. aureus. The other, in E. coli cell wall, the productions of O2－, H+ in outer membrane, and H2O2, OH－, ･OH in periplasmic space occur. These ROS and H2O2 give the damages cell membrane proteins and DNA molecular in cytoplasm.

(4) DNA damages due to zinc ion complex formation within DNA base-pairs G≡C, A=T may be occurred in cytoplasm of bacterial cells.