City to Grid (C2G): A Multidisciplinary Opportunity to Engineers Working on Industrial Electronics

City to Grid (C2G): A Multidisciplinary Opportunity to Engineers Working on Industrial Electronics

A new journal comes to life. The Journal of Industrial Electronics and Applications is open to a wide variety of topics and research lines. This editorial is meant to outline a possible multidisciplinary trajectory which provides different research opportunities to engineers working on Industrial Electronics topics. Cities are seen today, from the electric energy point of view, as a set of individual power loads with an unpredictable global behavior (lighting, HVAC, domestic loads and more), but because of several emerging technologies (EV, renewable energies, IoT), the increasing environmental sensitivity and the proposal of new services to citizens, this view of the city is changing drastically. The coordination of power loads to operate as a large single load, the unstoppable introduction of renewable energies in urban environments and the need for energy storage motivated by the rise of EVs are possible due to the growth of IoT. This allows cleverly coordination of every element in the city and therefore its transformation into a great power load, a great energy farm or a large energy storage system (IoE). The coordination of many small elements permits the operation as large modules. Just to mention a few of the technologies involved we can find: lighting engineering, energy storage, EV charging stations, renewable energy generators, wireless communications, control strategies for DC energy distribution, active urban furniture, grid interconnection strategies and many more. The generic denomination of C2G has been used to encompass all these different technologies. Diverse concepts and new ideas about C2G serve as the guiding thread to propose a work trajectory to this new journal. Like the Spanish poet, Antonio Machado, said: "Traveler, there is no path. Paths are made by walking".

The need to globally improve people’s life standards together with environmental awareness, Open Data and the emergence of new services to the citizens, make of our cities a field of research and development of new concepts and technologies which are pushing to change from the traditional concept of city to a new one denoted as Smart City.

Some years ago, the term Smart City was considered to be part of the subjects related to the Information and Communication Technology (ICT): Open Data, new services to the citizens, Internet of Things (IoT) [1-3], but technology is changing these original concepts including elements, modules and services linked with electrical energy (Figure 1). 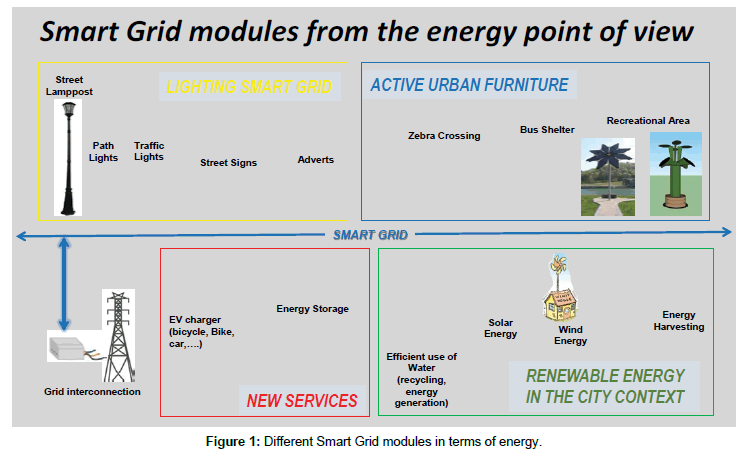 From the point of view of the electrical energy, the city has traditionally been seen as a distributed power load composed of a large variety of individual energy consumption points totally disconnected and quite unpredictable. Among the main electrical charges of a city, lighting plays an important role, both in the streets and inside buildings. Lighting represents an extremely distributed power load, but globally it represents a very important percentage of the total consumption [4]. If the city could coordinate and control its lighting in a unified way, it could be considered a great consumer and benefit from strategies such as reduction of consumption on demand of the electric company for example [5].

The incorporation of LED lighting technology in this field has yield a considerable power reduction of the electrical consumption as well as great capacity of regulation and personalization. In addition, the appearance of wireless technologies (IoT) has given rise to the socalled Lighting Smart Grids (LSG) [6-12].

LSG studies are usually related to DC energy distribution (both low and high voltage). The LED lamps are supplied by means of LED drivers that benefit from the inclusion of IoT technologies [13].

Heating, Ventilation and Air Conditioning (HVDC) and Domestic Hot Water (DHW) are other considerable loads in the urban context. These well-known elements generally make use of oil & gas energy generation systems. However, the increasing environmental awareness is currently pushing towards the elimination of this pollutant energies and making way to modern renewable ones [14-16]: Small solar power installations [17], micro-generation wind [18] and hydraulic micro-generation in rivers or close to the shore (also known as Kinetic Smart Grid (KSG) [19].

Therefore, cities are meant to give up their traditional role and become a distributed renewable energy generation system. Through the coordination of all these micro-generation systems, modern cities will be able to operate as large Renewable Energy Farms. New concepts and ideas are about to be developed by Power Electronics researchers regarding energy distribution strategies in DC (both in low and high voltage) [20] and energy injection to the AC grid [21-24].

However, without hesitation, the great revolution we are beginning to live is related to the Electric Vehicle (EV) [25]. It will change the global energy paradigm as well as having a particular impact upon urban environments [26,27]. Private EV charging points in garages and EV charging stations in urban context shall necessarily require Energy Storage Systems which will introduce new elements into the urban environment [28]. A possible experimental setup that includes different aforementioned elements is depicted in Figure 2. The EV DC charging stations will provide new opportunities to interconnect all the electrical elements in the city in an organized way. 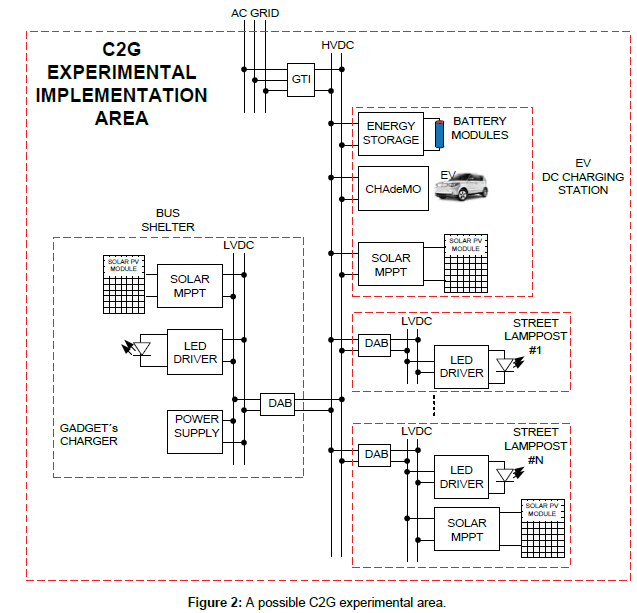 The coordinated management of all these elements pushes the concept of IoT towards the more specific concept of IoE [30,31]. Some of the specific R&D lines in this field are linked with the coordinated management of power loads, renewable generation systems, energy storage systems and stable power transfer between multiple buses (Master-Slave and Droop Control) [32]. Besides, as the traditional AC grid will continue to be the basic city skeleton in terms of energy, the search for better circuits to interface with AC mains will also be an interesting field of research [33-35].

Among others, research in bidirectional power converters and its control strategies are extremely actives R&D lines [36-38] regarding the above mentioned issues.

One of the things that will happen in the near future is that, the conventional elements of urban furniture, today designed to meet aesthetic conditions and provide basic functional services to citizens [39], will evolve towards active elements (Active Urban Furniture- AUF) aiming to be the support of renewable generation systems, containing in their interior elements of energy storage and providing new citizen services (charging points for gadgets [40] or electric bicycles for example) [41].

All this cocktail of technologies open the door to engineers working on the field of Industrial Electronics to a new multidisciplinary world of technology concepts and ideas that we have called in this editorial City to Grid (C2G). The city of the future in terms of energy [42].

I would firstly like to thank the Journal Coordinator of the Journal of Industrial Electronics and Applications and its Editorial Board for the great honor of writing this kick-off editorial.

I also would like to cite my colleagues from the University of Oviedo. Firstly, the members of the CE3I2 Research Group, in particular Dr. Emilio Lopez- Corominas, Dr. Antonio Javier Calleja-Rodriguez, Dr. Javier Ribas-Bueno and Dr. Pablo Quintana-Barcia for their help and advice in preparing this editorial. I also would like to appreciate the collaboration of the Dr. Eduardo Alvarez- Alvarez from the Hydraulic Engineering Research Group and, finally, I would like to mention the engineering student Ms. Sara Rico-Rivero for the aid provided in the writing and grammatical correction of this document.