Objective: To evaluate clinical analysis and financial loss of alcohol-related maxillofacial trauma in tertiary medical center. Study design: Case series with chart review.
Methods: We retrospectively reviewed the medical records of maxillofacial injury patients who visited our emergency department between January 1st 2010 and December 31st 2010. Alcohol-related maxillofacial injuries were defined as cases in which the alcohol was the direct cause of the injury. The type of injury was assessed by physical and radiologic examination. We also documented the patients’ age, sex and the combined injuries along with the medical cost.
Results: We assessed 441 patients with maxillofacial injury. Alcohol was the cause of the injury in the case of 82 of these patients (18.2%). Among them 75 were male (91%) and 7 were (8.5%) female. Blowout fracture and nasal bone fracture were the most common type of injuries (91.5%). Intracranial hemorrhage was
the common type of combined injury (6%). Each patient spent an average of $2,800 towards medical care which includes the public insurance and the final average medical cost per patient came up to about $14,000.
Conclusion: Alcohol-related maxillofacial injury mainly occurs in young men and where blowout and nasal bone fractures are common type of alcohol related maxillofacial fractures. Maxillofacial injury causes many socioeconomic problems and therefore the harmful side-effects of the alcohol could be decreased by educating the public on the consequences of drinking and driving and violent behaviors they often show drinking.

Alcohol is enjoyed as a drink all over the world and there has been an increase in the incidence of alcohol-related accidents. Alcoholrelated injuries are a problem in both high and low income countries [1]. Alcohol-related trauma is recognized as a major public health problem [2]. The central nervous system is suppressed during the drunken state which inhibits the cognitive, emotional faculties and leads to sensory motor dysfunction which in turn results to a higher incidence of violent behavior or vehicular accidents [3]. The incidence of alcohol-related accidents has been increasing. An estimated 7.5% of drivers in nonfatal crashes and 12.9% of nonfatal crashes were alcoholinvolved [4]. Therefore, socioeconomic expenditure has increased substantially. As is the case with other types of trauma, alcohol is an important causative factor of maxillofacial trauma; however, data or studies regarding this issue are lacking. We authors analyzed patients who visited the emergency department and ENT clinic with alcoholrelated maxillofacial trauma. We retrospectively analyzed our findings on the basis of frequency according to sex, the types and severity of the trauma and age distribution. In addition to this we attempted to assess the medical costs and evaluated the medical and social effect trauma.

We performed a retrospective study by conducting chart reviews. This study was approved by the Institutional Review Board of tertiary medical center. We included patients who had visited tertiary medical center emergency department from January 1st 2010 to December 31st 2010 for alcohol-related maxillofacial trauma, including assault, traffic accidents and falls. Alcohol-related injury was confined to instances of drinking and driving, falls or involvement in assaults in a drunken state according to the medical record or patients states. We included only the maxillofacial trauma occurred in drunken patients (direct influences of alcohol). The patients were analyzed by age and sex distribution and the relationship between these 2 factors were studied. The types of trauma are divided into orbital fracture, maxillary fracture, mandibular fracture, zygomatic arch fracture, temporal bone fracture and nasal bone fracture; the percentage incidence of each fracture was calculated. Associated trauma types were also assessed and their severity was evaluated. The medical cost of the treatment and investigations was also calculated and averaged per patient.

The total number of patients with maxillofacial trauma who visited the tertiary medical center emergency department during the year 2010 was 441, of which 354 (80.3%) were men and 87 (19.7%) were women. Among all the cases of accidents or injury involving maxillofacial trauma, 82 (18.6%) were related to alcohol consumption. 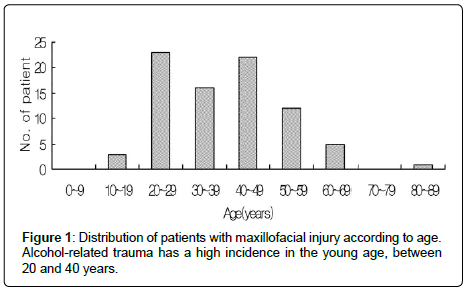 Figure 1: Distribution of patients with maxillofacial injury according to age. Alcohol-related trauma has a high incidence in the young age, between 20 and 40 years. 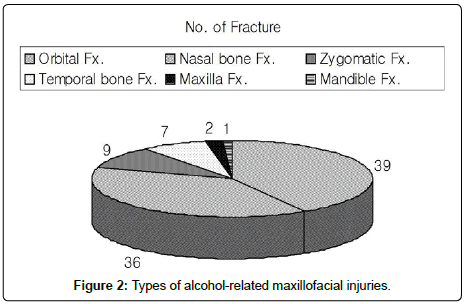 10 (12.2%) patients had combined trauma at other sites, namely, cranial fracture and intracranial hemorrhage. The most fatal combined injuries were brain and lung injuries (Table 1).

Medical cost related with the trauma

The total amount of medical cost including out-patients clinic and admission for 82 patients was $230,658. This value excludes the amount covered by insurance. When this total amount was divided by the number of patients, an average cost of $2,813 was obtained. Therefore, each patient with alcohol-related trauma was responsible for an average amount of $2,800 as medical fee and considering public insurance, medical cost per patient was about $14,000 which is a huge economic loss. The total amount spent because of the direct influence of alcohol was $1,148,000.

The study was aimed at analyzing the amount of medical expenditure incurred by patients with alcohol-related maxillofacial trauma by dividing the patients according to age, sex and type of the injury. The results of the analysis were used to ascertain the medical cost and expense and thus, the socioeconomic loss was indirectly studied. The types of the injury and damage due to the alcohol associated with maxillofacial trauma were also reviewed.

Pharmacologically, alcohol is classified as a central nervous suppressant drug having sedative and anti-anxiety effects. It acts on the cell membrane, antagonizes the glutamate receptor, Gamma aminobutyric acid (GABA) A receptor and ion transport [5]. A person may feel euphoric and active when alcohol is present in low blood concentrations but as the concentration increases the person may develop neurologic symptoms such as speech disturbance, imbalance, activity dysfunction, memory loss and cognitive dysfunction. Ambivalent motion, judgment loss that may be present from the beginning may easily lead to an argument, dispute and misconduct. It also may lead to overexpression or suppression of personality traits. In high blood concentrations, various central nervous system functions may be depressed, manifested by symptoms such as depression, slow or retarded reaction, memory or cognitive loss [5,6]. These reasons can be implicated for the common occurrence of traffic accident, assaults, falls etc. after acute alcohol intoxication. Many crimes are committed in the drunken state. In our study, we observed varying types of injuries caused by emotional outbursts, personality, retarded reaction and cognitive dysfunction occurring in the acute alcohol intoxication state.

The sex ratio of patients with maxillofacial trauma was 4:1 in favor of men. This value is higher than that obtained for all patients with maxillofacial traumas, i.e., 3:1, which was reported previously by Nakamura et al. [7] with a higher incidence in men. Over 90% of the patients with alcohol-related injury were men. Although the drinking rate in females is increasing, our data indirectly suggests that drinking is more common in men and the higher incidence of injury in men may be reflective of this fact [6]. Men are involved in more socioeconomic activities in Korea and therefore have more opportunities of drinking alcohol, which leads to higher chances of getting involved in accidents or trauma.

The age distribution of the patients indicated that over 75% of the total patients were aged between 20 and 40 y. According to the data, young men are generally susceptible to maxillofacial trauma and particularly, are the high-risk group in alcohol-related maxillofacial trauma.

Combined fractures were seen in 12% of the patients and most of them involved the head, such as intracranial hemorrhage, or the lungs; both head and lung injuries are critical to the patients and this indirectly indicates the severity of alcohol-related injury. Aijaz et al. [9] also reported that the most common combined injury was intracranial hemorrhage, such as subdural hemorrhage, followed by lung injury; however, lung and brain damage are the most common types of combined injury among all maxillofacial injuries [10]. Therefore, this combined injury does not suggest that maxillofacial trauma associated with alcohol is more severe than other types of maxillofacial trauma. According to Shepherd et al. [11] the amount of alcohol consumed is related with the severity of the trauma. In order to investigate this further, the blood alcohol level should be measured quantitatively and in depth study would be necessary.

From the medical cost point of view, a fair amount was spent by the patients and if these numbers are totaled with the insurancecovered cost, the total amount would be a much higher. Apart from the medical costs, if the loss is calculated from the point of view of labor and social activity, including the psycogenic and physiologic stress of the patients’ guardian during the treatment period, the costs would be higher. Likewise, increase in the incidence of chronic alcohol abuse may lead to an increase in mortality [12,13] and also an increase in trauma or injury occurring during the drunken state caused by the toxic effects of alcohol itself [14]. However, the public is now being made aware and educated about the effects of alcohol consumption. Therefore, more public should be educated on the effects of alcohol and the dangers in order to prevent the occurrence of accidents due to drinking and driving and avoid daily activities after drinking.

There are definite effects of chronic alcohol consumption, abuse and the drunken state itself increases the risk of accidents, which naturally increases the risk of alcohol-related maxillofacial trauma. Young men are the high-risk patients for this injury and orbital wall fracture is the most common fracture site involved; this injury leads to a fair amount of hospital fee. Personal suffering and socioeconomic loss are concerns for the society as well as for the patients themselves. Therefore, alcohol-related accidents could be prevented through active public education and maximal effort should be undertaken to minimize accidents related to alcohol consumption.